Cisco Systems, Inc. (CSCO, +6.66%) reported its latest quarterly results after the bell on Wednesday, beating both revenue and EPS estimates, and provided a solid outlook.  It was just what the telecom equipment group ($DJUSCT, +4.53%) needed after trending lower for the past month and fading on a relative basis vs. the benchmark S&P 500: 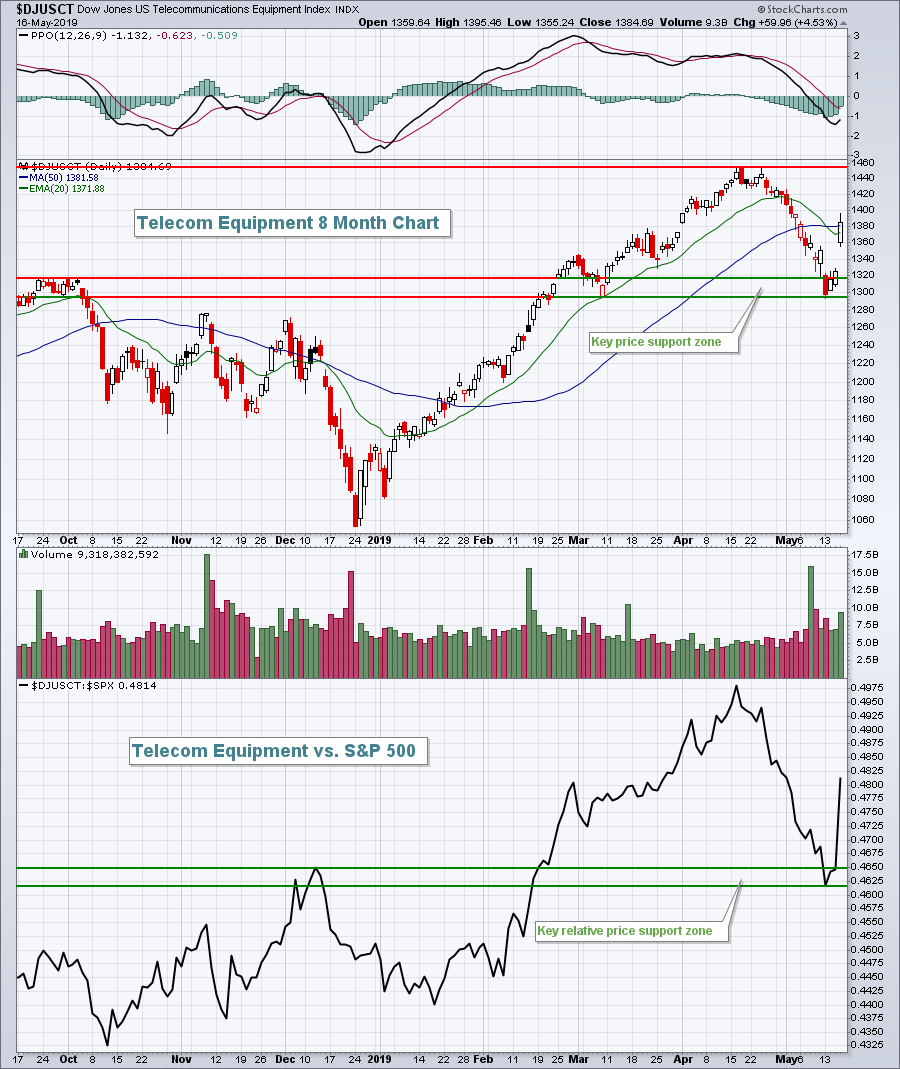 I would watch those support zones above very closely.  Given the strength of CSCO's earnings, the group should not violate the annotated support levels.  If it does, I'd grow more bearish telecom equipment.  But for now, the group remains one of the better relative performers and CSCO, while consolidating, is likely to breakout again over the next quarter.

Materials (XLB, +1.40%) helped to pace the broad market advance as all 11 sectors advanced on the session.  Financials (XLF, +1.01%), aided by rebounding treasury yields, outperformed as did three other aggressive sectors - industrials (XLI), technology (XLK) and consumer discretionary (XLY) - all of which gained 0.92%.  Energy (XLE, +0.55%) was the weakest sector, yet still managed to post nice gains.

Two familiar names, financial administration ($DJUSFA, +1.79%) and specialty finance ($DJUSSP, +1.62%), were key drivers behind the push higher in financial stocks.  Both have shown solid relative performance and are featured below in the Sector/Industry Watch section.

The 10 year treasury yield ($TNX) is down 3 basis points this morning to 2.38% as the flight to safety continues. While I was initially very concerned that equities couldn't rise with a falling TNX, I've backed off that stance.  Instead of lower yields signaling weak economic activity ahead, I believe it's bond traders telling the Fed that inflation is nowhere to be seen and we're in a modest economic growth period with little to no inflation - an environment where interest rates should remain low.  There could even be a rate cut before another rate hike given lowered inflationary expectations.  Hiking rates will only strengthen our dollar further, putting more downward pressure on commodity prices and sending inflation even lower.  If the Fed fails to listen and hikes rates, the stock market could suffer from deflation, not inflation.

The China Shanghai Composite ($SSEC) was down 2.48% overnight amid heightening trade tensions and now resides just a bit more than 1% above its low from last week.  China's market continues to get hit harder than the U.S. market as traders send a message loud and clear that China has more to lose from a trade war than the U.S.

Here in the U.S., Dow Jones futures are down 179 points with 30 minutes left to the opening bell.

Applied Materials (AMAT), a key semiconductor stock with big ties to China, reported better-than-expected quarterly results last night.  AMAT was up 5% after hours, but with renewed trade fears its premarket gain is only 1.5% based on its most recent trade this morning.

I've provided my Top 10 Picks each of the past two quarters, selecting what I believe 10 of the strongest companies on my Strong Earnings ChartList.  Their performance has been outstanding, gaining more than 34% over the past six months, while the benchmark S&P 500 has gained 7%.  It's a practice of selecting strong relative performers with solid fundamentals.  On Sunday night, I'll unveil my latest Top 10 Picks, designed to be held the next 90 days.  It's a joint webinar with EarningsBeats.com President John Hopkins.  If you'd like to attend, simply CLICK HERE for more details.

If you can't make the event live, don't let that stop you.  John will provide a recording of the event later that evening to view at your convenience!

We've been rallying nicely the past few days and there are a couple of key technical discussion points I'd like to offer on the NASDAQ's 60 minute chart: 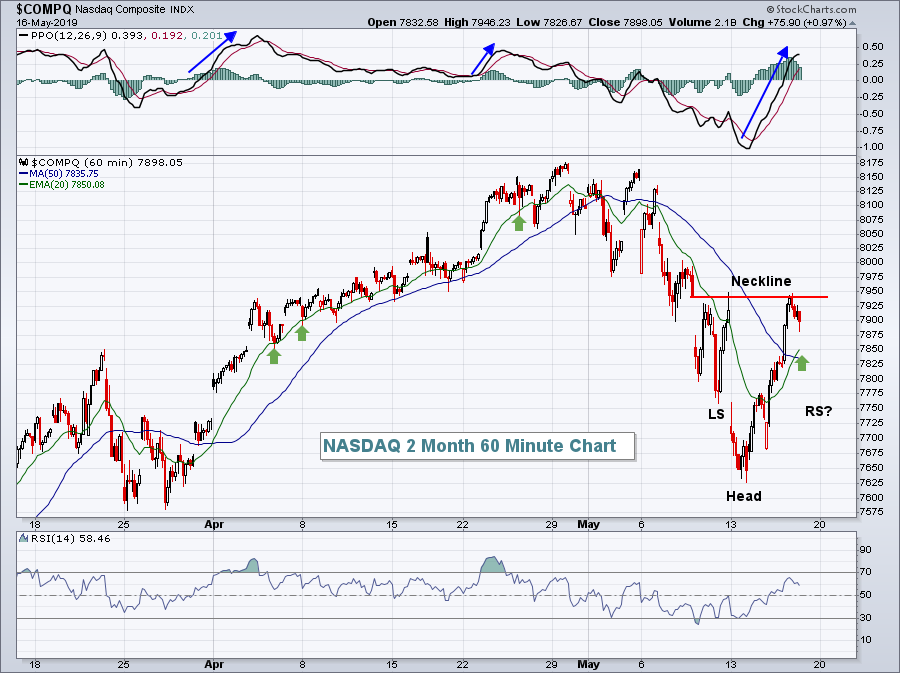 Note first that when we begin to rally and the hourly PPO moves higher and above the centerline (blue directional lines), initial pullbacks have held the rising 20 hour EMA support.  So off of this week's rally, the initial support level to watch closely is the 20 hour EMA, currently at 7850.  Given this morning's weak futures, we could easily see that tested at the opening bell, perhaps even lost.  Next up could be a right shoulder in a possible bottoming head & shoulders pattern.  I'd prefer to see the right shoulder print above the left shoulder, which was just above the 7750 level.  Therefore, the short-term support range, in my view, is 7750-7850.  If that area is lost, the recent lows at 7625 come into play.

Financial stocks (XLF) have been mostly relative laggards over the past 15 months as you can see from this chart: 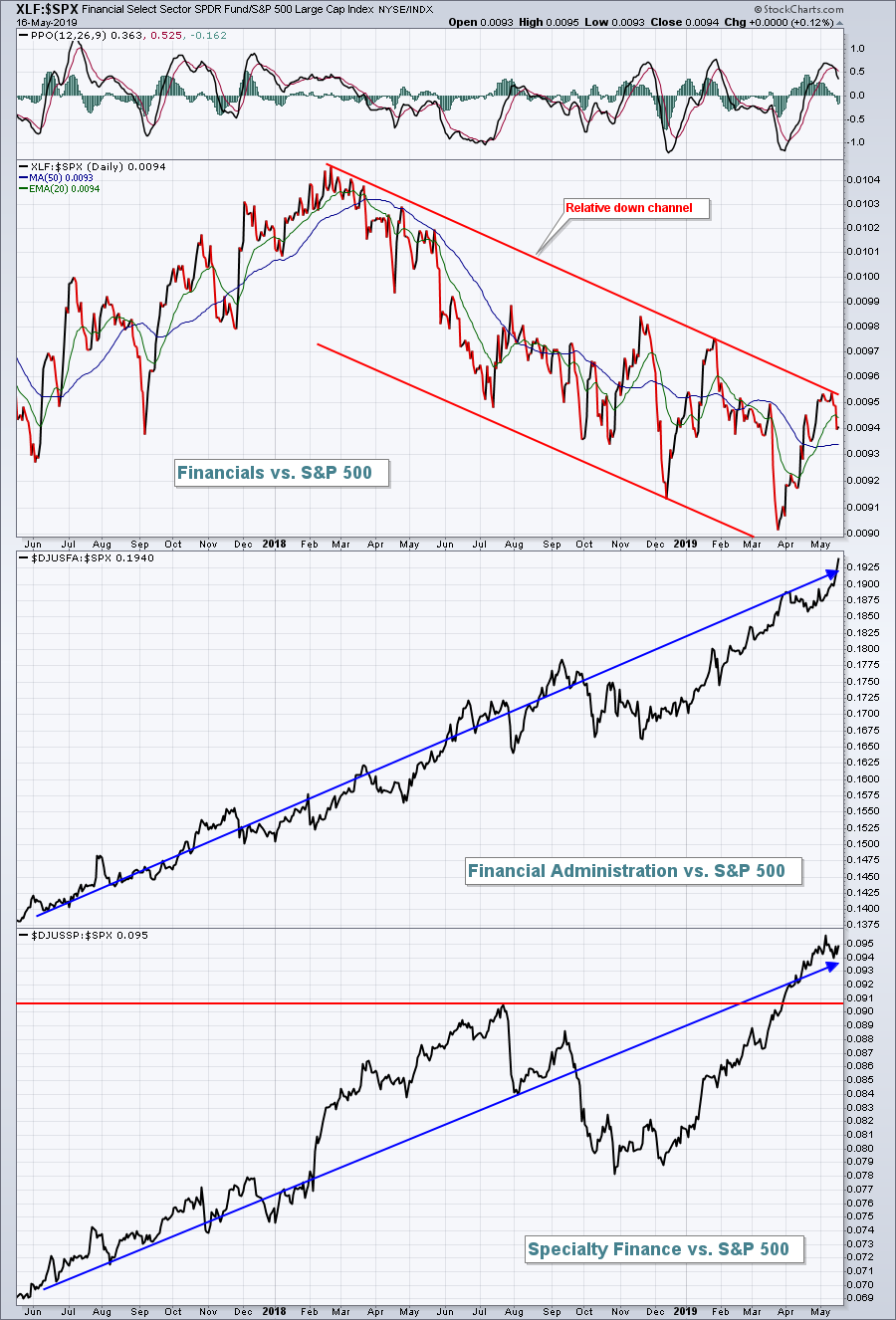 But despite money rotating away from the sector on a relative basis, two industry components - financial administration ($DJUSFA) and specialty finance ($DJUSSP) - have easily outperformed the S&P 500 and remain on buy signals.  In the former group, stocks such as FleetCor Technologies (FLT), Euronet Services (EEFT), Global Payments (GPN), and PayPal (PYPL) have been leading the charge.

Fridays have been a bullish day for the S&P 500 since 1950.  Trailing only Wednesdays (+20.1%), Fridays have produced annualized returns of 17.3% over the past 70 years and have risen 56.6% of all Fridays during that period.  The chance of any day being higher since 1950 has been 53.3% so Fridays clearly have maintained a bullish bias.