April nonfarm payrolls were much stronger than expected, jumping to 263,000 and well ahead of the 180,000 consensus estimate.  The unemployment rate fell to 3.6%, the lowest its seen in 50 years.  The bond market wasn't impressed, however, ending the Friday session down 2 basis points to 2.53%.  Even when we see solid economic strength, the bond market's reaction is muted.  Bond traders are making a compelling argument that we should remain on guard against deflation, not inflation.

Friday's leadership came in many forms as all of our major indices were solidly higher and all 11 sectors rose in unison.  The small cap Russell 2000 gained 1.98%, while the NASDAQ tacked on another 1.58%.  The S&P 500 rose just under 1% and the Dow Jones lagged the others, rising only 0.75%.  Industrials (XLI, +1.21%) and consumer discretionary (XLY, +1.18%) topped the sector leaderboard as the former once again threatened a key breakout: 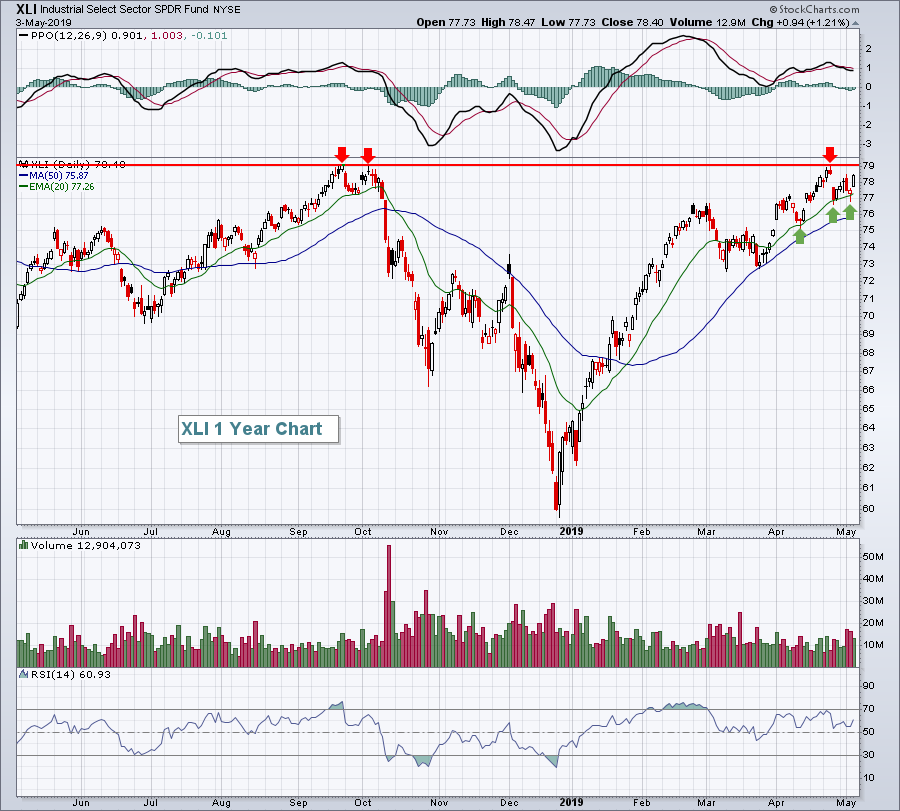 A close above 79 would be extremely bullish, but volume tailed off a bit on Friday as the rally came up just a bit short.

Industrial machinery ($DJUSFE, +2.03%) did make a breakout and is showing signs of providing relative leadership in Q2: 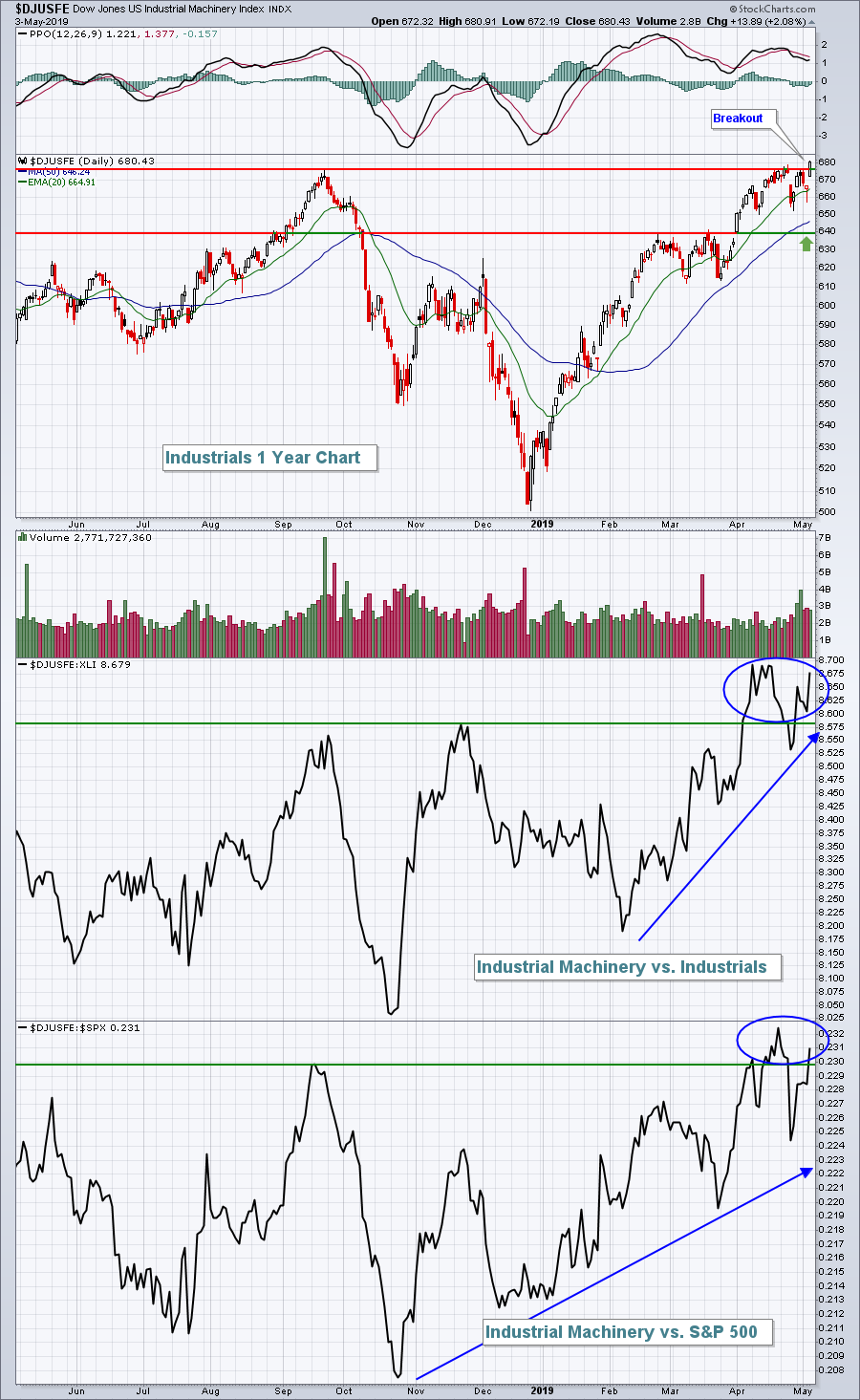 The DJUSFE broke out to fresh relative highs vs. both the XLI and S&P 500 in April.  I'd expect to see further relative strength in this area over the coming weeks.

The trade war is back in the headlines this morning and it's spooking global markets.  China's Shanghai Composite ($SSEC, -5.58%) fell 172 points overnight as President Trump threatened higher tariffs and Chinese officials threatened to pull out of talks altogether.  That development has left buyers on the sidelines as the selling spread to Europe this morning and is impacting U.S. futures.  Dow Jones futures are currently lower by 478 points as the week promises to get off to a very rough start.

Overall, the U.S. stock market has rallied nicely and looks to move higher throughout the balance of 2019.  There are pockets of weakness or relative weakness, however, and transports ($TRAN) would certainly be among those pockets (with railroads being the exception).  Transports are economically-sensitive so relative strength is generally seen as a very bullish sign.  Unfortunately, we're still waiting for that relative strength: 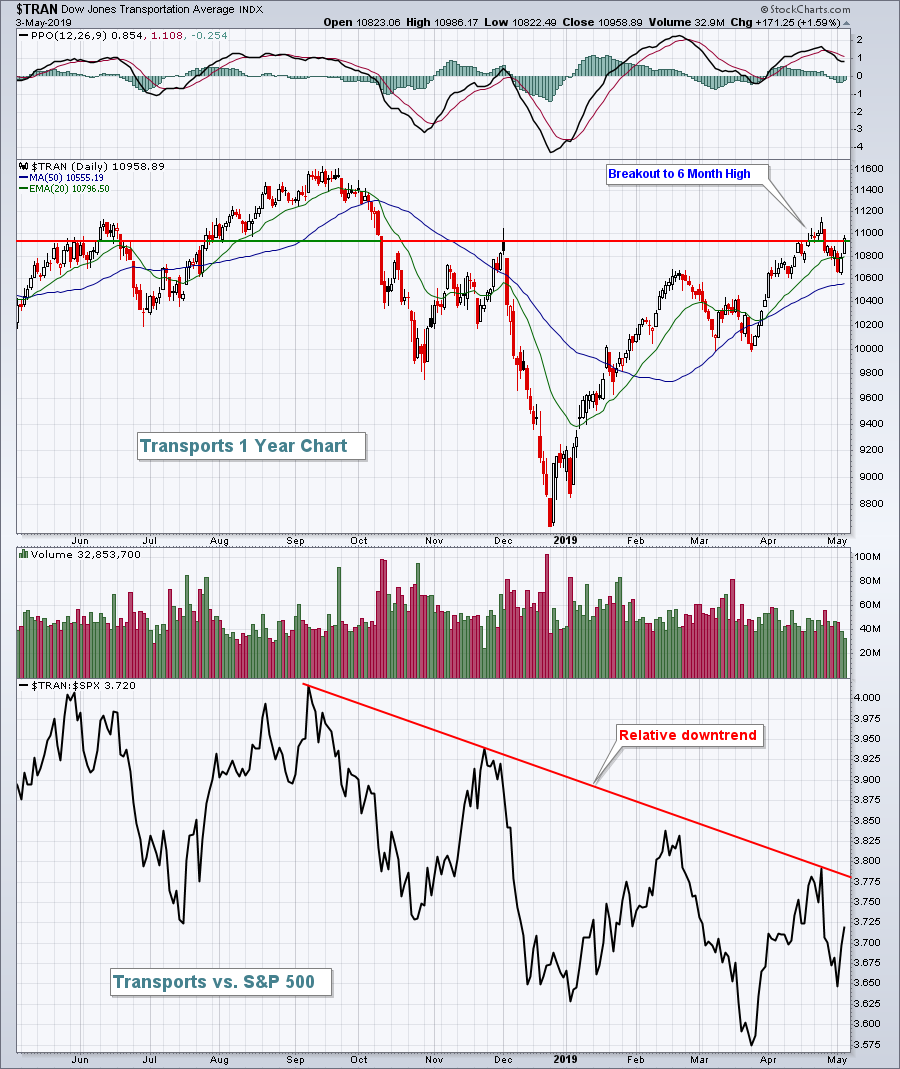 The above chart really helps to illustrate the importance of relative strength.  The absolute chart at the top shows an absolute breakout to price highs not seen since October 2018.  On the surface, that would appear to be quite bullish.  But it's very important to remember what the overall market is doing.  The lower chart shows that transports remain in a downtrend relative to the benchmark S&P 500.

Durable household products ($DJUSHD, +3.34%) was the best performing industry group in consumer discretionary on Friday and it's on the verge of a significant breakout: 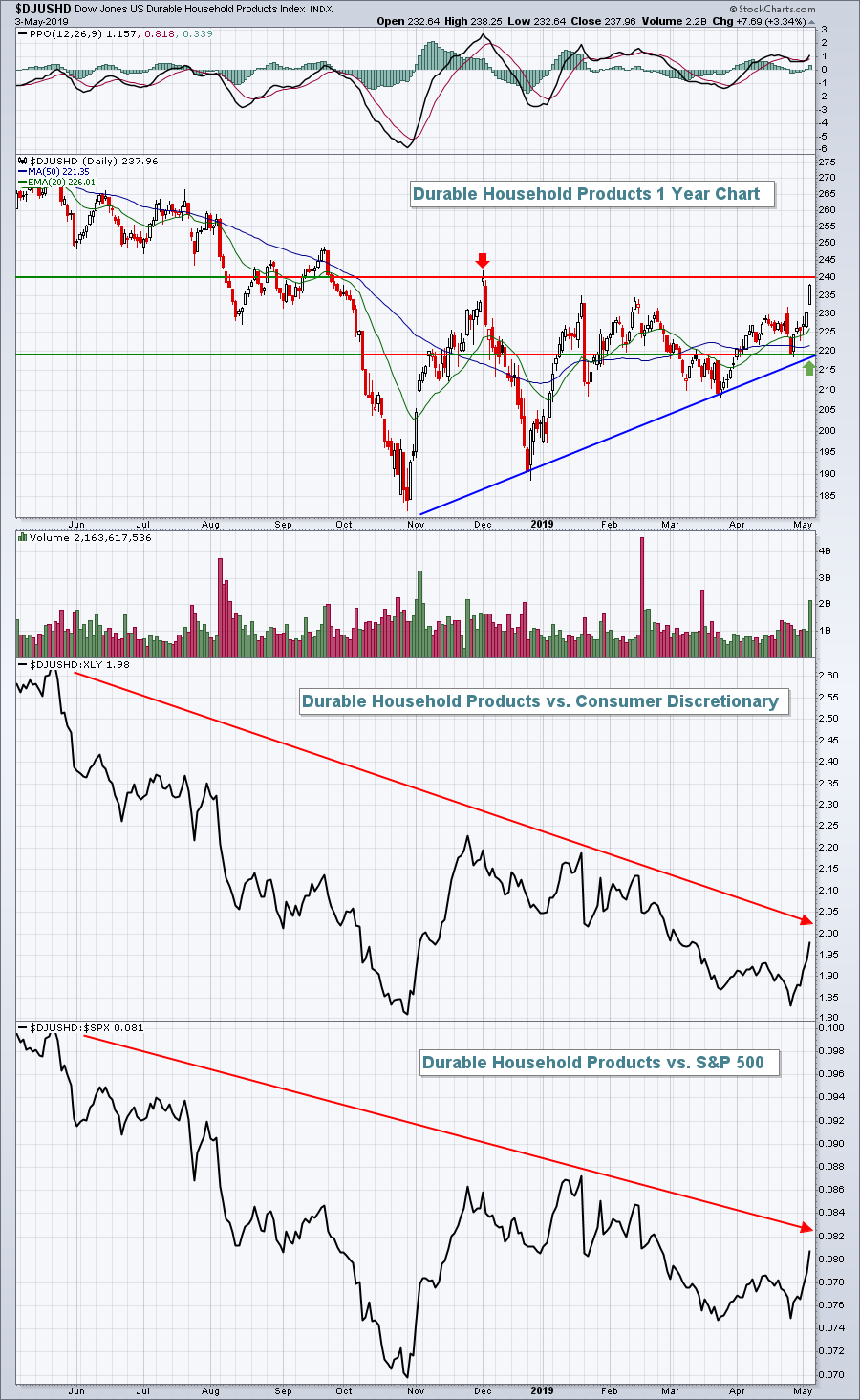 There are big differences between the DJUSHD chart and the earlier DJUSFE chart shown in the Market Recap section.  The DJUSFE has made its breakout, while the DJUSHD is still attempting to do so.  Also, check out the relative strength of the two groups.  The DJUSHD has been mostly downtrending vs. its consumer discretionary peers and the benchmark S&P 500, while the DJUSFE has been demonstrating solid relative strength.

In order for the DJUSHD to remain in an uptrend, it really needs to hold onto price and trendline support near 220.

Given the US-China trade developments over the weekend, I'm going to hold off on Monday Setups in this article.  I want to see how stocks open and whether we see buyers return in early action.  I will provide setups during MarketWatchers LIVE today, which begins at noon EST.  I'll plan to feature a stock tomorrow morning here in Trading Places.

I am not a believer in the "go away in May" theory, mostly because I have the facts that support me.  If you go away in May, where are you going to go?  Into treasuries where yields are still near historic lows?  Into global markets, the very markets that the S&P 500 has mostly outperformed the past couple years?  Into cash where you'd lose money relative to others that hold stocks historically through May?  Exactly where are you going to go?

So while I believe that those touting "go away in May" are providing very misleading information, I do recognize one very real consequence.  The constant media attacks make investors nervous.  And it's clear in the way they invest.  Consumer staples (XLP) has only enjoyed one other calendar month that tops May in terms of relative strength vs. the benchmark S&P 500.  Check this out: 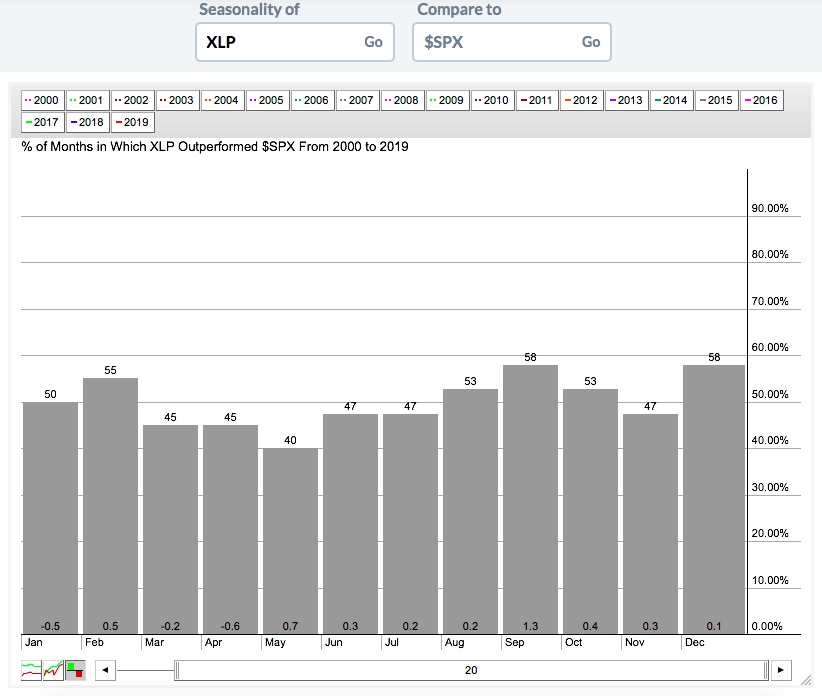 First, realize that the XLP has beaten the S&P 500 only 40% of Mays in the past two decades.  But its average outperformance is +0.7%, topping every other calendar month, except September, where fear usually runs rampant.