A big turnaround occurred on Tuesday as many beaten-down stocks and industries from the May drubbing led a market rally.  The NASDAQ and Russell 2000 led the rally with gains of 2.65% and 2.62%, respectively, but it was a wide-participation advance as the S&P 500 and Dow Jones climbed 2.14% and 2.06%, respectively.  Hard-hit industry groups like gambling ($DJUSCA, +6.08%), banks ($DJUSBK, +3.62%), transportation services ($DJUSTS, +5.32%), and semiconductors ($DJUSSC, +4.24%) led a massive rally that enabled the S&P 500 to hold onto its March price support and regain its 50 week SMA.  The following chart shows the kick save: 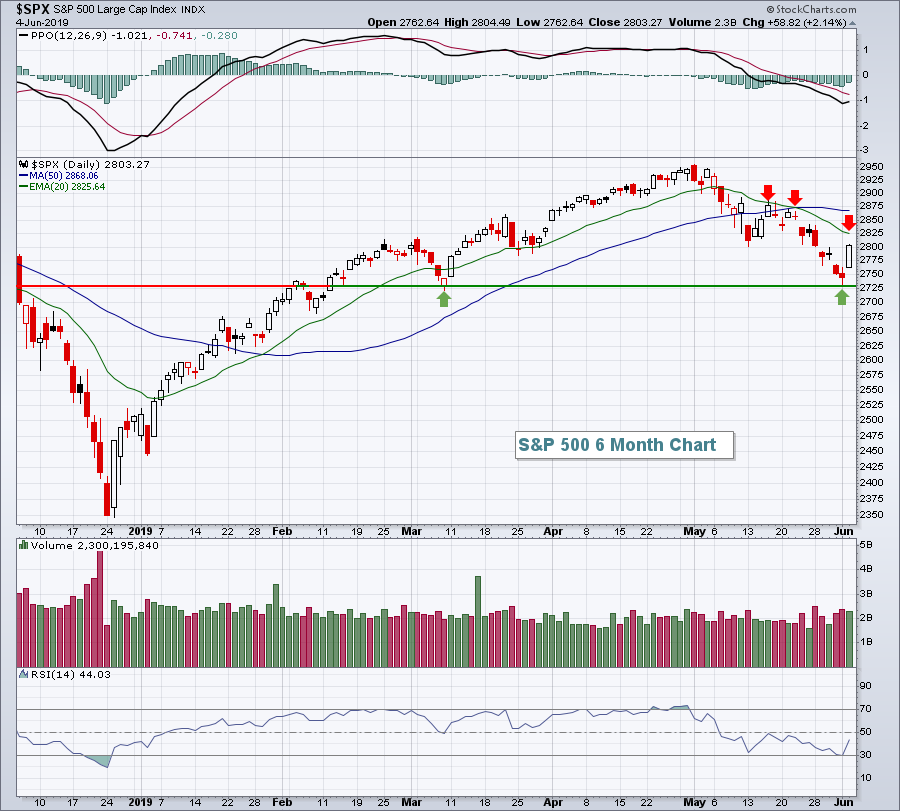 In terms of sector performance, technology (XLK, +3.34%) was the day's winner, but materials (XLB, +2.81%) posted a second very strong day.  The U.S. Dollar Index ($USD) failed to clear overhead resistance between 98.00-98.20 and has dropped rapidly since.  That has provided the impetus for material stocks to outperform in a big way of late: 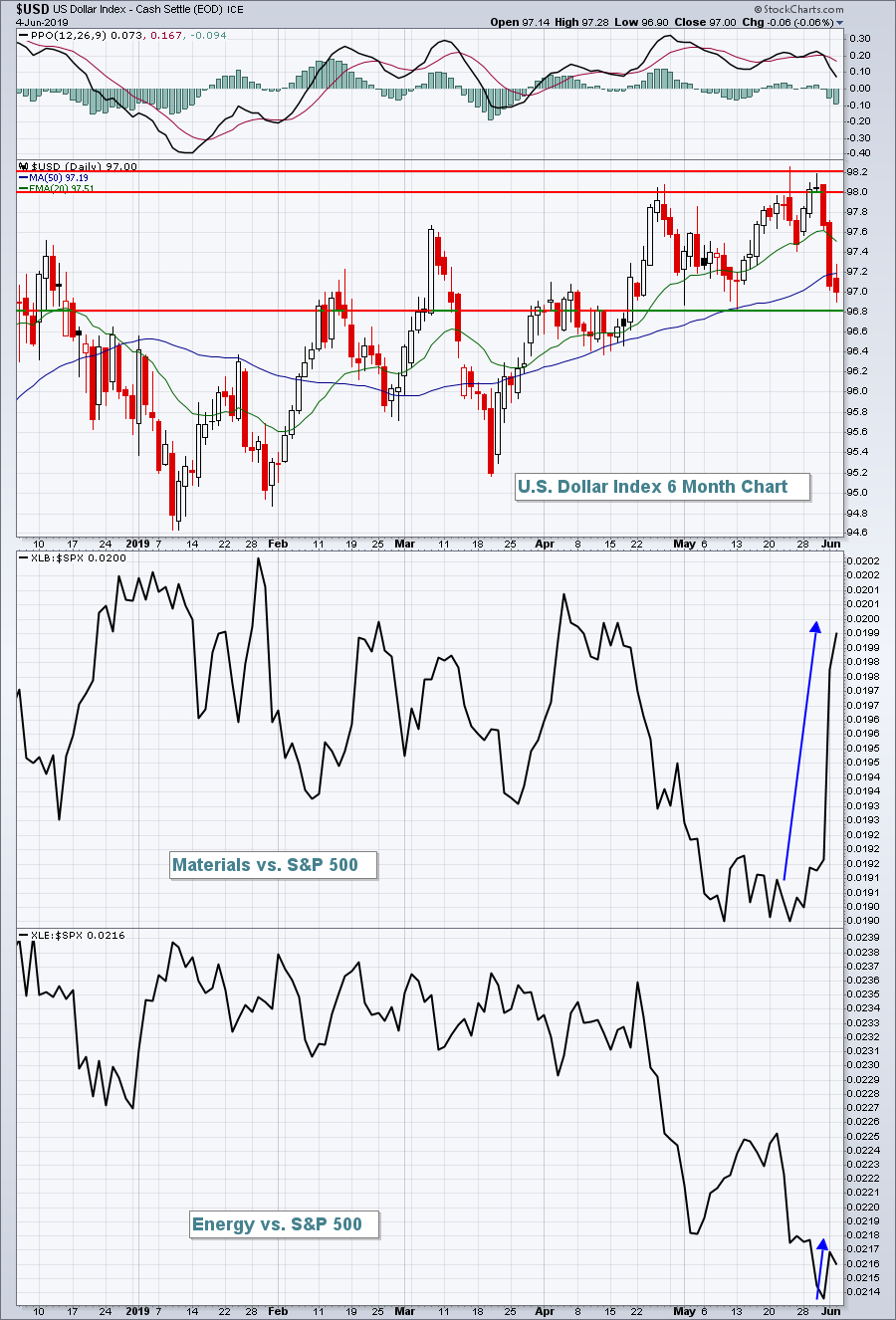 Unfortunately, the same cannot be said for energy.  We have seen an uptick in relative strength, but nothing like what we've seen with materials.  I suspect this relative rally in materials still has legs in the short-term, but I don't believe the long-term uptrend in the USD is over.  Therefore, I'd keep a tight leash on any trades in the materials sector.  Make no excuses if the group begins to lose its relative strength hold.

Futures were up nicely ahead of the ADP employment report, but after a huge miss (27,000 vs. 175,000), we've seen futures fall back, though they do remain positive at the moment.  Dow Jones futures are higher by 65 points with just over 30 minutes left to the opening bell.

Stick with the leaders.  While the masses focus on the major indices like the Dow Jones, S&P 500 and the NASDAQ (which is fine if you're comfortable trading ETFs that mimic these indices), we need to focus on the areas of the market that are outperforming the major indices.  My goal is to beat the S&P 500, not to track or mimic it.  How do you do that?  Well, it all starts with watching rotation among sectors and industries.  I believe we're in a secular bull market so I plan to trade stocks within aggressive sectors and leading industry groups.  One easy way to do this is to monitor relative ratios.  As an example, the defense stocks ($DJUSDN) have improved rapidly the past several weeks and are now among the groups that you want to consider trading: 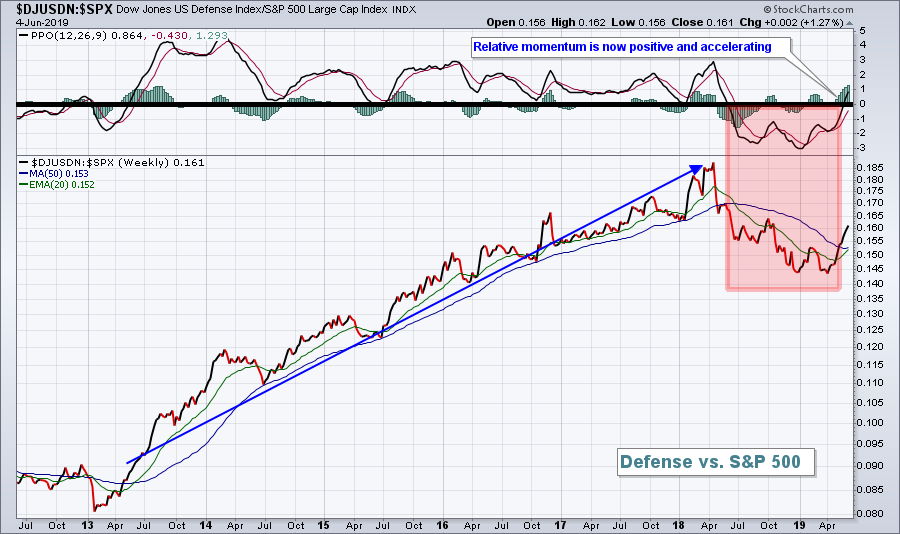 When the relative PPO drops beneath the zero line, it's generally a very good idea to stay away from the group until positive relative momentum returns.  The DJUSDN was a great relative performer from 2013 into early-2018, but then it became a "must avoid" for a year before turning higher again.

I've developed a methodology recently for selecting stocks in a portfolio (model, aggressive and income portfolios) from my Strong Earnings ChartList (a ChartList of companies that beat Wall Street consensus estimates in their latest quarters and also are strong technically).  The portfolios feature strong leading stocks from leading industry groups with the sole purpose of outperforming the S&P 500.  If relative strength interests you, I'd strongly encourage you to join me and John Hopkins from EarningsBeats.com this Monday, June 10th at 4:30pm EST.  I'll provide a link here in my blog later this week that provides the details of Monday's webinar. It will require at least a trial membership at EarningsBeats.com to attend.

In the Current Outlook section, I featured a strong and improving defense sector.  Why not take a look at one that you should continue to avoid? 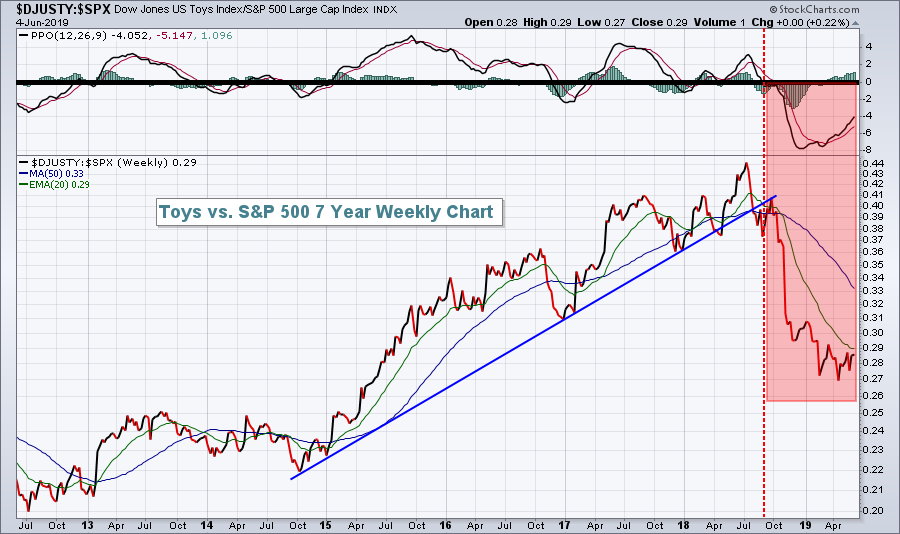 The Dow Jones U.S. Toys Index ($DJUSTY) weakened in the summer of 2018, then completely fell apart in the fourth quarter.  While the relative PPO is moving higher, it's still in negative territory.  What that rising PPO is telling us is that toys' relative weakness is slowing.  It's not suggesting relative strength, which would be the wrong conclusion from the rising relative PPO in this case.

Beige book to be released at 2:00pm EST