It wasn't a big down day, but it certainly felt like it.  It started off so promising.  Right out of the gate, the NASDAQ surged more than 1% in the opening minutes.  However, by day's end, it closed in negative territory and printed a rather ominous big red candle.  I might not think too much about it ordinarily, but the reversal did occur at neckline resistance in an inverse head & shoulders continuation pattern: 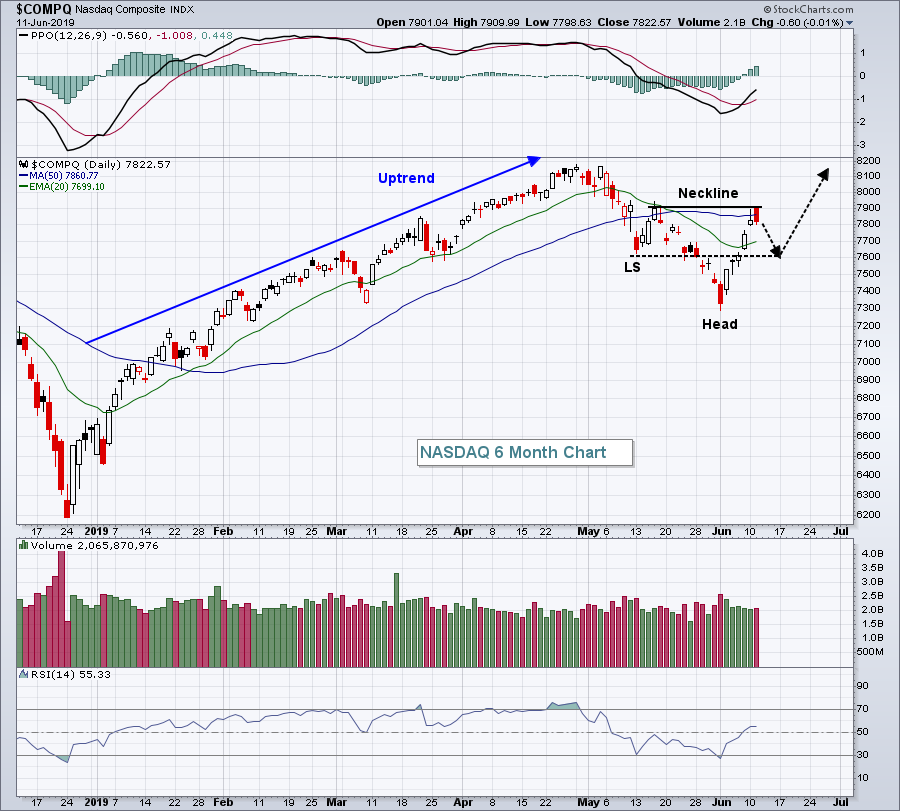 The projection above is the bullish case for the current consolidation period.  It would need to be re-evaluated if the NASDAQ were to lose the price support established by the head that formed in early June.

One problem yesterday was the weakness in software shares ($DJUSSW, -0.80%).  I discussed this in yesterday's Trading Places blog article, alluding to the false breakout on Monday.  I was not at all surprised by the lack of participation in software shares.  The bigger problem, however, was the significant weakness in defense ($DJUSDN, -3.22%) and aerospace ($DJUSAS, -2.00%) one day after the mega merger between Raytheon (RTN, -5.11%) and United Technologies (UTX, -3.96%).  The latter will be looking for price support at its early March low: 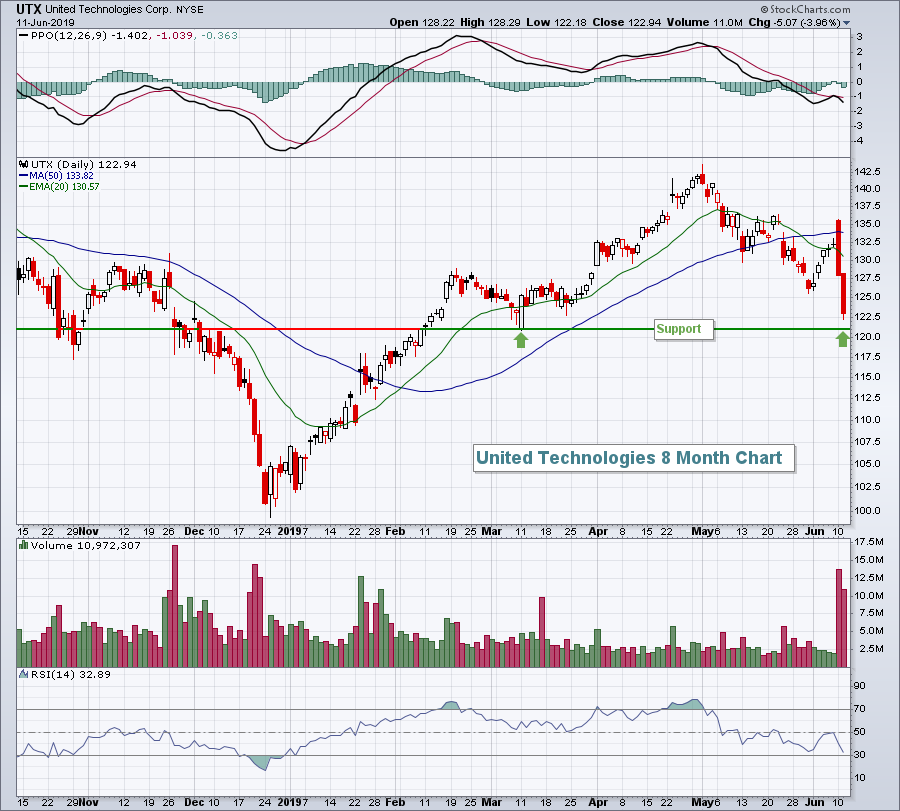 Despite the reversal on Tuesday, a few sectors did manage to hang onto gains for the session.  Communication services (XLC, +0.42%) rallied, as did consumer stocks.  Both consumer discretionary (XLY, +0.39%) and consumer staples (XLP, +0.32%) headed higher.

For the second day in a row, we've received a benign inflation report.  This morning, the CPI came in at +0.1% as expected.  However, the core rate of inflation was +0.1%, below the expected +0.2% level.  The Fed will be meeting later this month and will no doubt take into the account the lower than expected inflation readings and the recent weak jobs report.  I don't believe the Fed will lower rates this month, but next month is a very real possibility.  The 10 year treasury yield ($TNX) is down 2 basis points to 2.12% on the lower than expected level of core CPI.

Crude oil ($WTIC) is taking another big hit, down 2.68% and once again beneath $52 per barrel.  That will not help an already ailing energy space.

Global profit taking kicked in overnight in Asia and spread this morning to Europe.  U.S. equities appear ready and willing to follow suit as Dow Jones futures are down 60 points with roughly 45 minutes to go to the opening bell.

The S&P 500 fell one point yesterday, also reversing on the day.  There are a few scenarios that I'd watch for in the coming days: 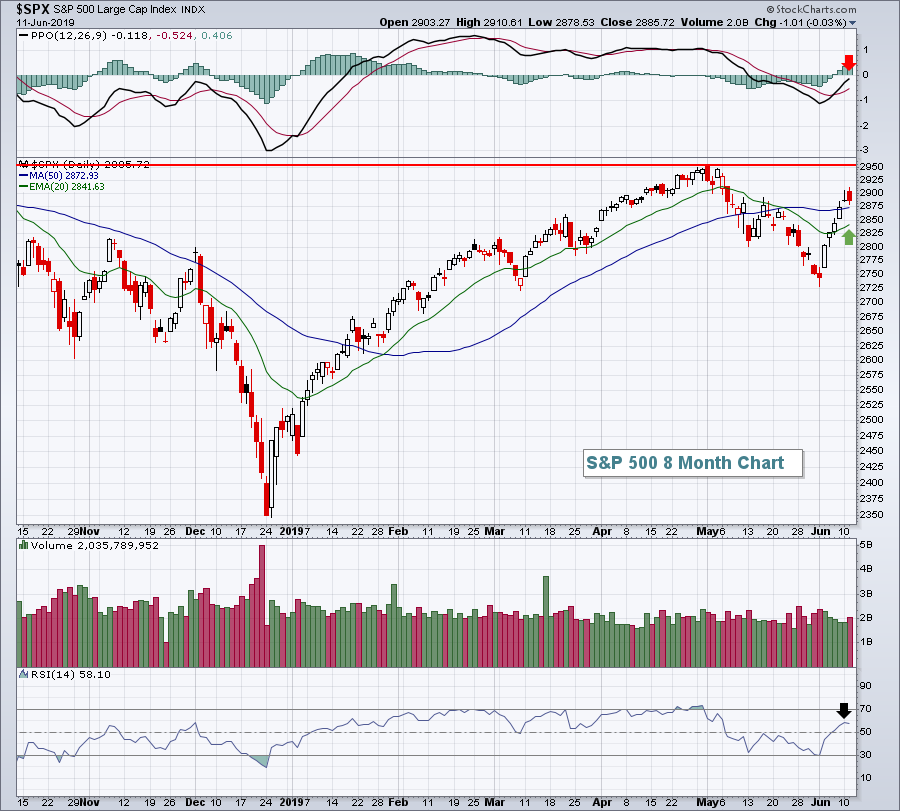 First, price resistance just above 2950 marks the all-time high on the S&P 500.  Clearly, moving through that level would be bullish.  The red arrow marks centerline resistance on the PPO.  A move through that zero line would indicate that the bulls are regaining momentum.  To the downside, the rising 20 day EMA (green arrow) should hold as support if we're truly beginning the next leg of this bull market.  Finally, at the bottom of the chart, you can see the RSI starting to roll over just below 60.  Downtrends typically feature RSI tops in the 50-60 zone.  I think battle lines have been drawn here so let's watch to see how everything develops.

Materials (XLB, -0.07%) have surged in June as we saw a near-term top in the U.S. Dollar Index ($USD) in late-May.  A rising dollar has put pressure on both energy (XLE, +0.20%) and materials since 2011, but the recent selling in the greenback has most definitely helped the XLB cause: 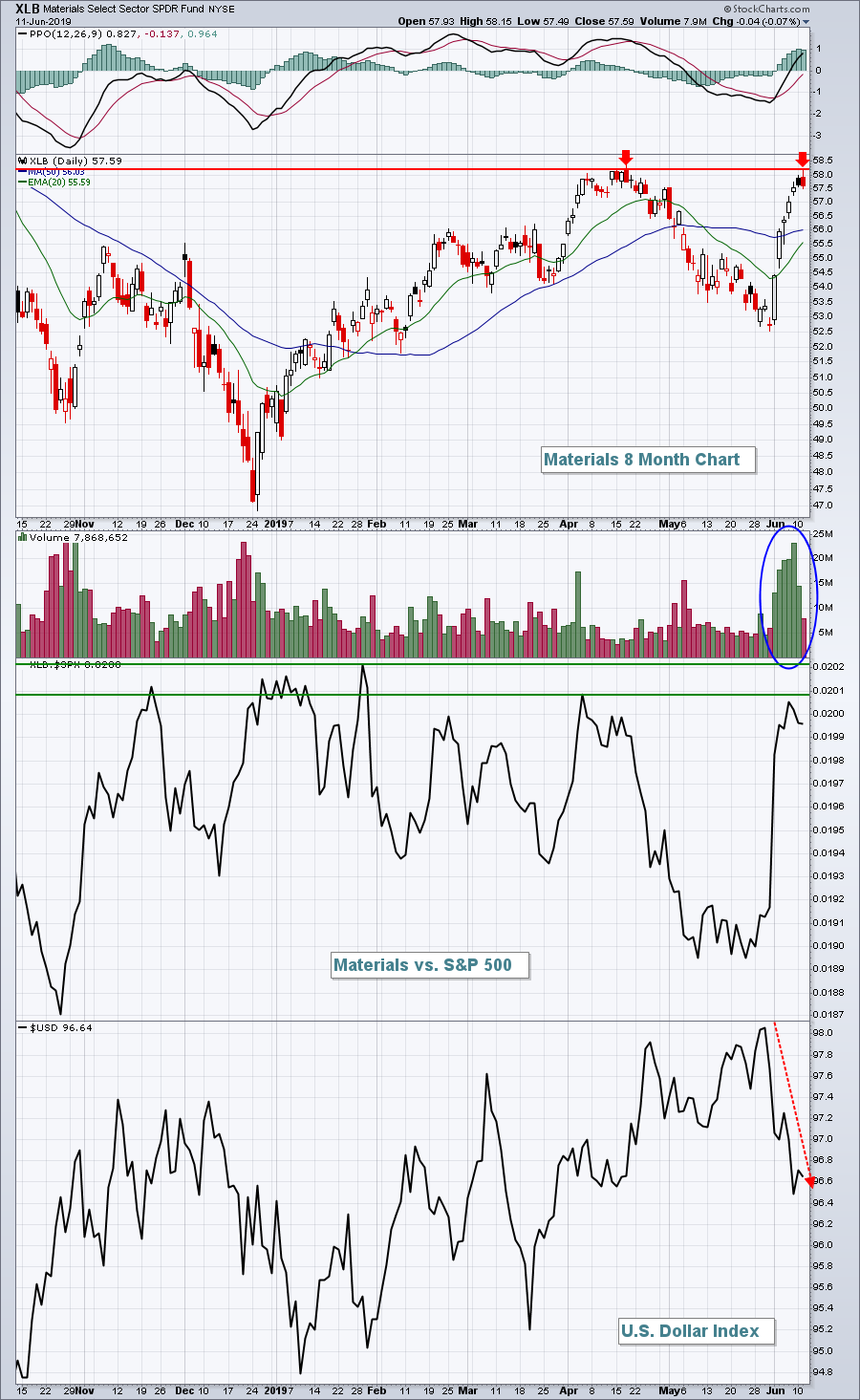 The volume increase has been impressive, suggesting a lot more interest in this sector.  The 10 year treasury yield ($TNX) has more rapidly deteriorated in recent weeks than its German 10 year treasury yield counterpart ($DET10Y) and that normally coincides with dollar weakness.  So it makes sense to me that traders would move into materials during such a period.  Now it'll likely come down to technicals.  Can the XLB clear that overhead price resistance level (red arrows)?

Raytheon (RTN), as pointed out earlier, is a part to a big merger with United Technologies (UTX).  It's difficult to say whether recent history will matter, but RTN has loved July in recent years: 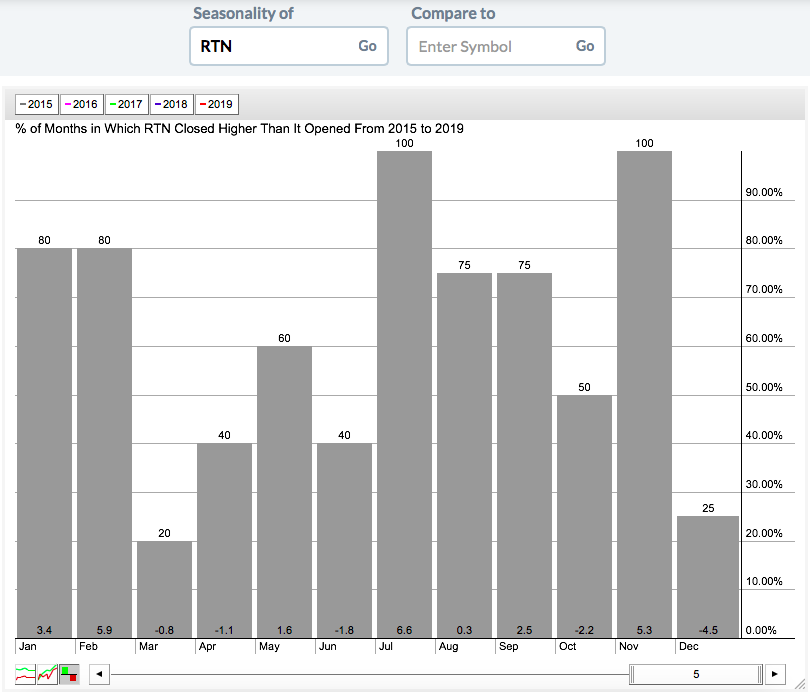 July has produced average returns of 6.6% over the past five years, ranking it as RTN's best calendar month during that period.