U.S. equities were buoyed by resolution to the 5% Mexico trade tariff announced recently by President Trump to encourage Mexico to slow the pace of illegal immigrants entering the U.S.  That tariff was set to take effect yesterday, but never materialized.  In addition, there were two mega-mergers that sparked buying interest as well.  First, Raytheon (RTN, +0.69%) and United Technologies (UTX, -3.13%) announced a deal combining these two defense ($DJUSDN, -0.72%) and aerospace ($DJUSAS, -0.74%) giants.  Then, in software ($DJUSSW, +0.74%), Salesforce.com (CRM, -5.26%) agreed to acquire Tableau Software (DATA, +33.70%) at a huge premium in an all-stock transaction valued at $16 billion.  With that announcement, the DJUSSW threatened yet another breakout: 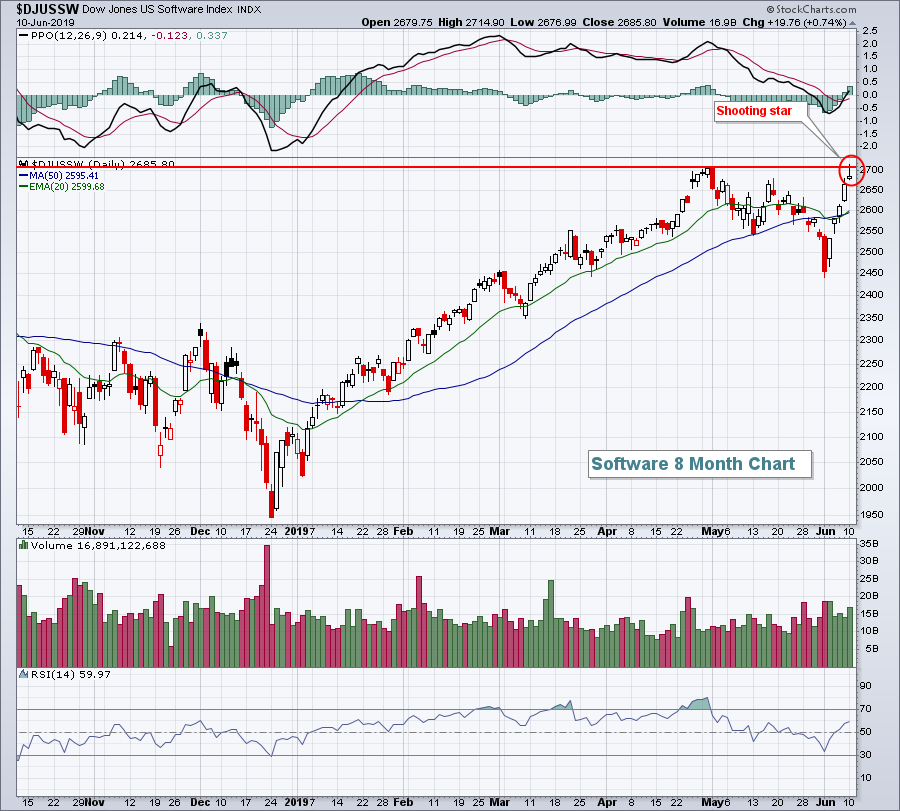 We need to watch software very, very carefully at this level.  Yesterday's shooting star candle normally carries bearish short-term consequences, especially when it occurs at a major price resistance level.  A false breakout and reversing candle could suggest the DJUSSW falls back to test its rising 20 day EMA.  If stocks rise today and software can't use that strength to forge another breakout, it might not be a bad idea to lower your short-term exposure here.  Make no mistake, though, software remains one of the strongest industry groups so any short-term selling should be followed up with buying again on a pullback.

It was encouraging to see semiconductors ($DJUSSC, +2.40%) extend their recent advance.  The DJUSSC had closed just above its declining 20 day EMA on Friday, so one test on Monday was to see whether the group could confirm that short-term breakout with further strength.  Needless to say, that test was a success.  That strength in the DJUSSC enabled technology (XLK, +1.02%) to lead the overall market higher.  The tech-laden NASDAQ showed relative strength, gaining 1.05%.

U.S. futures are suggesting another strong open for stocks.  Dow Jones futures are higher by 144 points a little more than 30 minutes ahead of the opening bell.  Helping to fuel the rise is another jump in the 10 year treasury yield ($TNX), today rising 2 basis points to 2.16%.  A rising TNX means lower treasury prices.  Proceeds from those sales many times will find their way into the equity market.

Crude oil ($WTIC) appears to have stabilized with recent lows holding support established earlier in 2019 in the $50-$52 per barrel range.  The WTIC is up 1.26% to just under $54 per barrel at last check.

The NASDAQ has been rolling to the upside since bottoming in early June.  In order to build on this recent strength, it will be important for the index to hold gap and 20 day EMA support on the hourly chart: 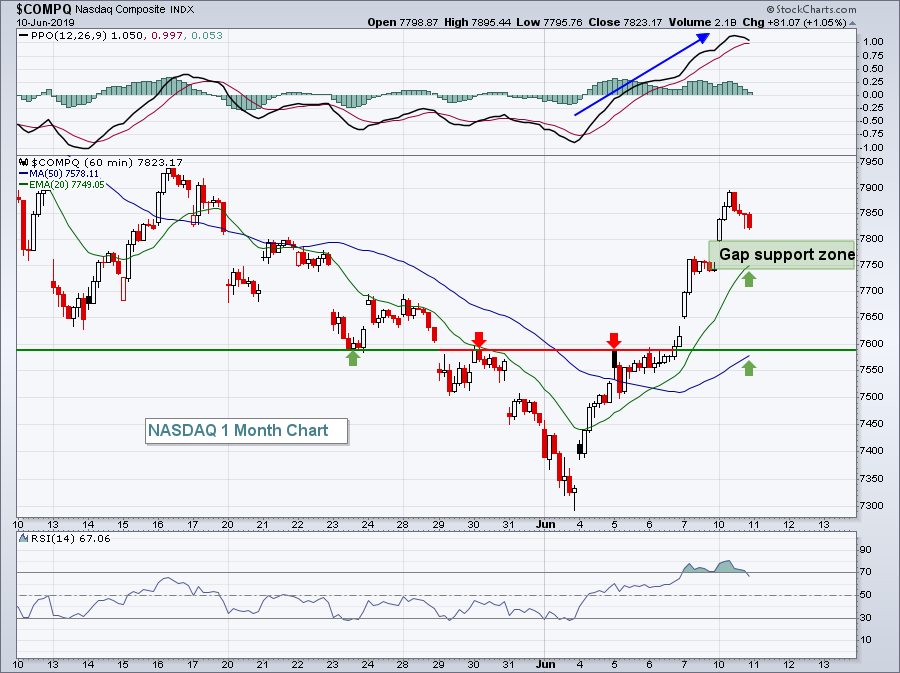 A move much below 7740 would likely lead to a test of the 7600 area, which has proven to be a key pivot area on the chart over the past few weeks.

The Dow Jones U.S. Mobile Telecommunications Index ($DJUSWC, -1.77%) had a rough day yesterday and is moving closer and closer to major absolute and relative support tests: 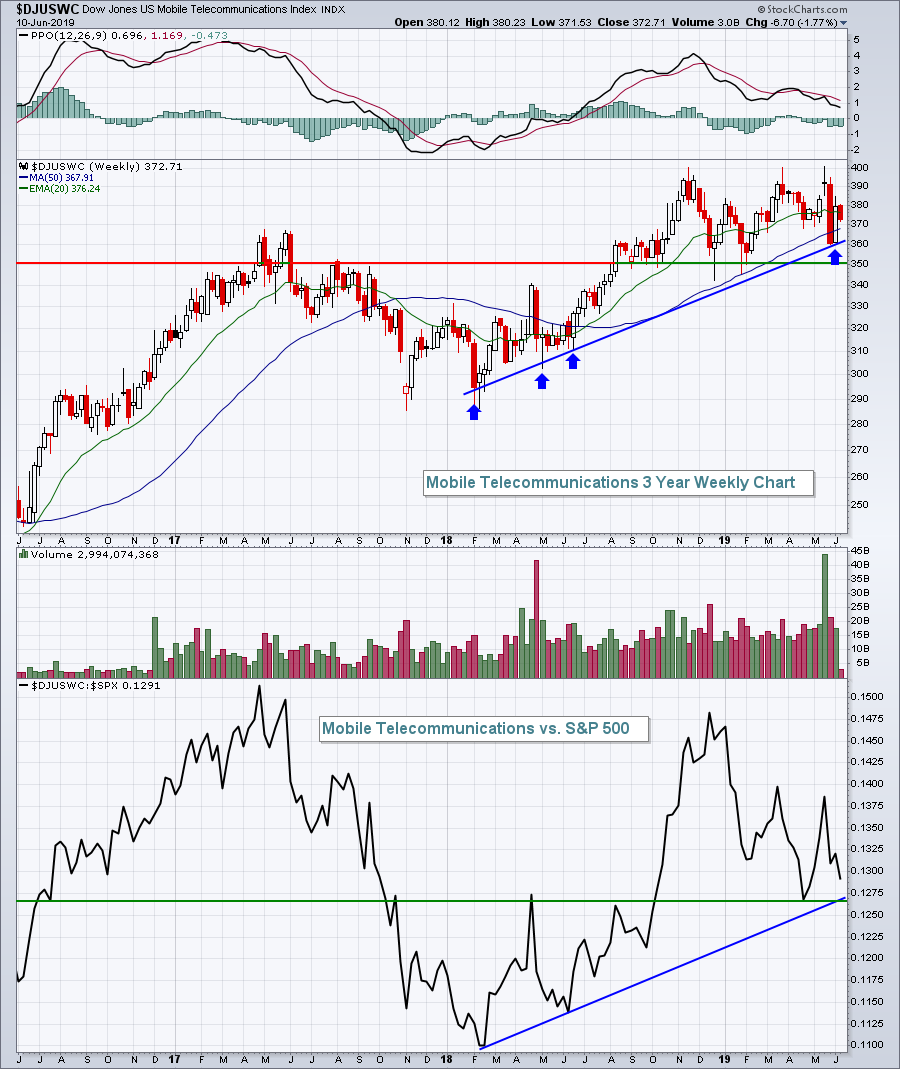 A weekly absolute close below 350 and a relative close below 0.1265 would be a clear warning sign to me.  I prefer owning stocks in industry groups that are technically-sound and trending higher.  Breakdowns at the areas discussed would be very bearish, in my opinion.

Many apparel retailers ($DJUSRA) have been under significant selling pressure in 2019 and Gap, Inc. (GPS) has been no exception, especially since gapping higher to open March.  Since that time, GPS has dropped from 31 to 18.  Looking at GPS historically, we're now entering the worst time of year as you can see below: 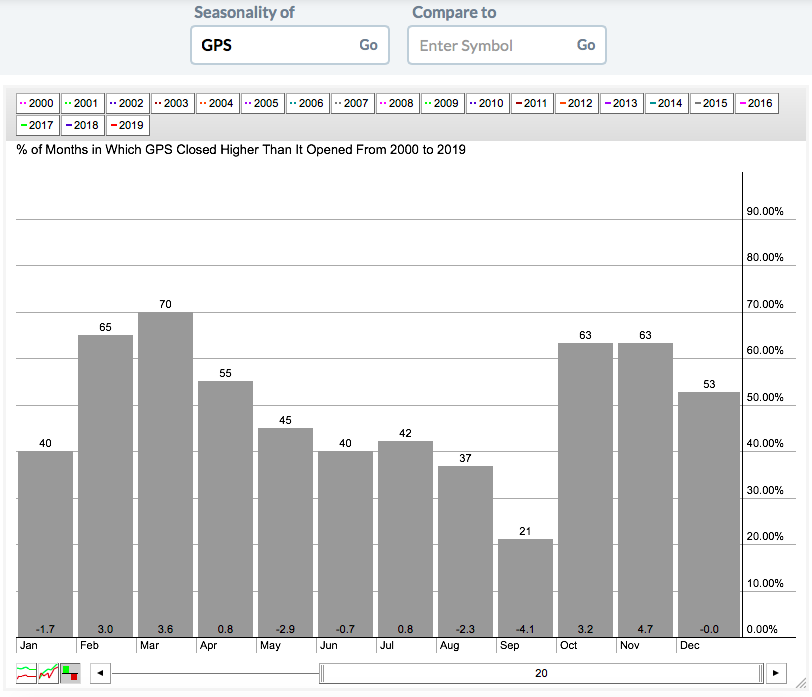 The odds of an advance on GPS really dwindle as we move into August and September, where monthly returns have averaged -2.3% and -4.1%, respectively, over the past two decades.