I am not at all surprised by Wall Street's action on Monday. The current Fed has not exactly been dependable in terms of following the lead of the treasury market, so short-term trading ahead of this week's Fed meeting would be expected to be somewhat defensive and that's exactly what we saw yesterday. Money rotated into defensive areas like treasuries. The 10 year treasury yield fell a couple basis points to 2.05% and a further decline into tomorrow's announcement wouldn't be shocking at all.

In addition, the equity market was very defensive as well. Look at the sector leaderboard:

All four defensive sectors topped the leaderboard. In fact, those were the only sectors that advanced on the day. Traders wanted no part of aggressive sectors. They took profits in those riskier areas just in case the Fed fails again to do the right thing. It's pretty sad, but it's true. The financial markets don't trust the Fed. We know what happened in December when the Fed stubbornly increased rates and remained steadfast to its promise of raising rates further in 2019. The stock market violently corrected. The smart money remembers and is positioning a bit safer this time around. The Fed will likely cut interest rates 25 basis points. I believe a 50 basis point reduction would send equities much higher. Failure to cut would not be a good thing at all.

U.S futures are lower this morning as the stock market prepares for the beginning of a 2-day Fed meeting that will culminate with a policy statement due out at 2pm tomorrow. As I've written about today, the stock market is nervous - and for good reason - ahead of the statement. The selling seen yesterday among high growth companies will likely pale in comparison to the selling of equities if the Fed disappoints traders once again.

Asian markets were modestly higher overnight, but European markets are tumbling this morning on disappointing earnings and probably a bit of nervousness over the Fed's possible action here tomorrow. The German DAX ($DAX) is down 2% at last check.

Dow Jones futures are lower by just over 100 points with 30 minutes left to the opening bell.

Since Ben Bernanke took over for Alan Greenspan as Fed Chief, the Fed has talked about transparency, trying not to shock the financial markets. Well, the treasury market is transparent too. It has tried, rather unsuccessfully, to convince the Fed of its desired course. This week, the Fed gets the chance to listen to what the treasury market is saying. LOWER RATES!!!!!

The 10 year treasury yield ($UST10Y) and 2 year treasury yield ($UST2Y) have both been declining since October 2018. The much shorter-term 3 month treasury yield ($UST3M) has also begun to rapidly decline. The fed funds rate remains near its high. The Fed needs to listen to the financial markets and lower rates by at least 25 basis points. Because inflation remains below target levels, I believe the Fed has room to lower 50 basis points....and should. But Fed Chief Powell's brief tenure suggests that's not likely to happen. He'll likely take it slow, lowering by 25 basis points on Wednesday. That will most likely "satisfy" the financial markets, nothing more. If Powell chooses to wait for more data, I don't believe the reaction on Wall Street will be a good one.

Here's a look at the various yields on a weekly basis over the past decade:

Everything was fine until October 2018. At that point, the treasury market began sensing turbulence ahead and the yields began dropping. It started on the long end and in 2019, moved to the shorter end. That rapid drop in the $UST3M since Q1 is really painting a picture of the treasury market demanding a rate cut. If the Fed disappoints the bond market, expect the stock market to react violently.

Asset managers ($DJUSAG, -0.86%) is part of the interest-rate sensitive financial sector (XLF). The group has been one of the worst performing industry groups over the past two years on both an absolute and relative basis. Here's the current view: 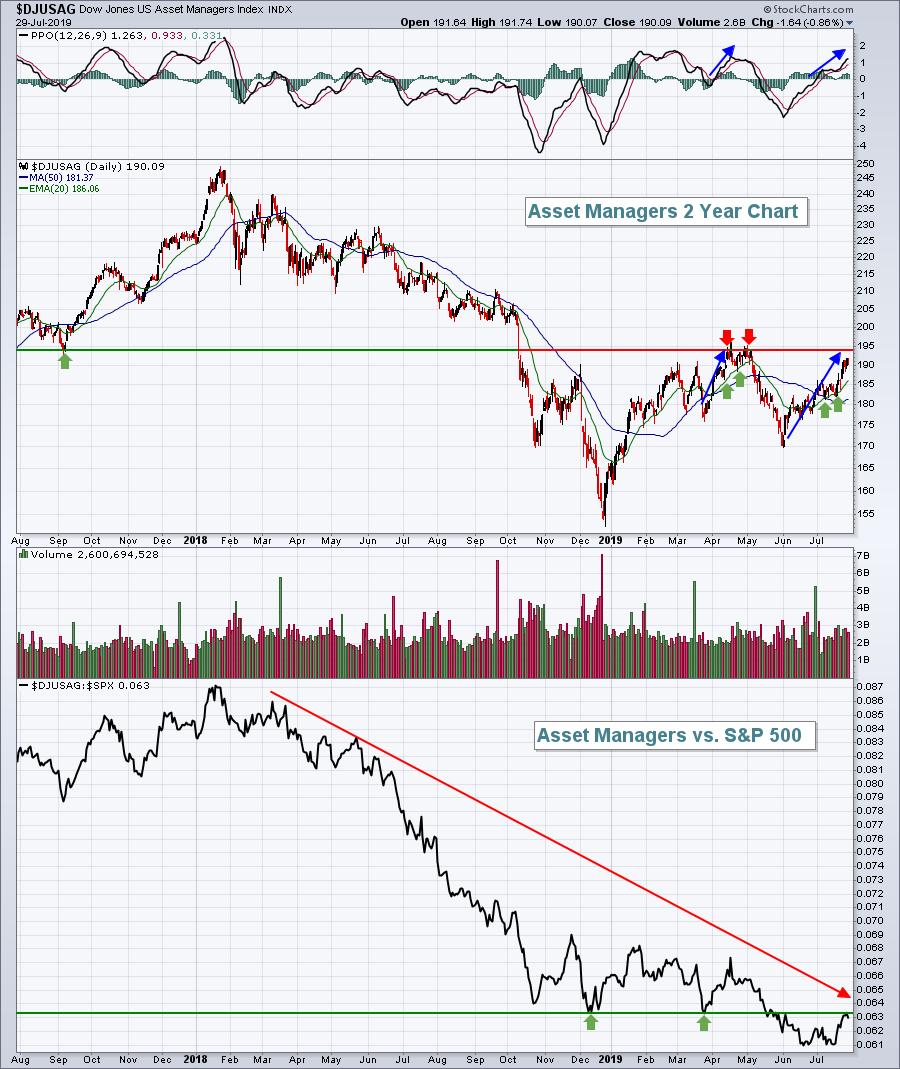 The blue directional lines show that things are improving, but we saw this exact situation back in April, only to see the group fail miserably. That relative weakness MUST change before I'd have any interest here. Moving through the .064 relative line and clearing overhead price resistance at 195-196 is needed to begin to repair the technical damage.