Communication services (XLC, +2.86%) exploded higher on Friday, thanks in large part to a blowout quarterly earnings report from Alphabet (GOOGL, +9.62%) after the bell on Thursday. They apparently kept their good news to themselves because Wall Street didn't see that type of report coming. Neither did I. Check out the GOOGL chart: 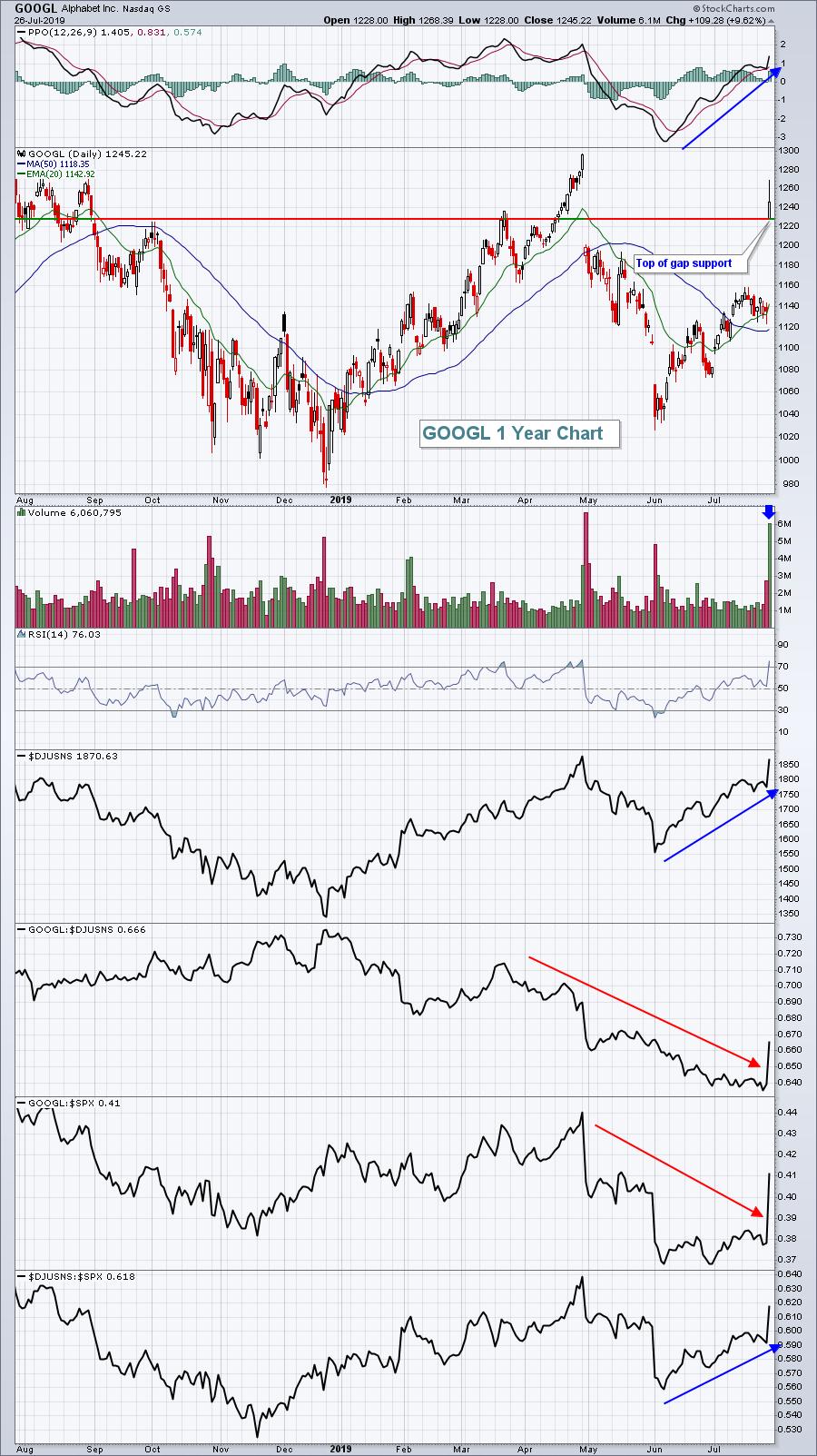 I'm not 100% convinced that GOOGL goes up from here, but it's very difficult to argue with the heavy volume surge in its shares. Note also that internet stocks were leading the recent S&P 500 rally off the June low. So it wasn't the internet space that was holding GOOGL back, it was GOOGL itself. That now seems to have changed with its earnings report. I'd keep an eye on the top of gap support. As long as that holds on a closing basis, GOOGL should remain an emerging leader. If it fails? Well, that brings the bottom of gap support into play, which wouldn't be a great thing in the near-term.

In addition to strength in communication services, financials (XLF, +1.09%) closed at a 16 month high. When we see aggressive sectors forging to all-time highs in unison, try to avoid focusing on all the negative media hype. It's easy to find, so keep your blinders on.

The first estimate of Q2 GDP was released Friday morning. It was better than expected, but considerably lower than Q1, likely paving the way for a fed funds rate cut when the FOMC meets this week.

Well, it's FED WEEK and global markets are anticipating a quarter point rate cut. Anything different and let the fireworks begin. I suspect we'll get that quarter point cut. I believe the Fed should cut 50 basis points as inflation is contained, but Fed chief Powell has shown in his brief tenure that he is very slow to act. I'd be shocked if he lowered by 50.

Futures are relatively flat as we open a new week. This will be a very big and busy week for earnings reports as Apple (AAPL) releases its results after the bell tomorrow.

The bulls are sitting back and awaiting the definitive breakout in industrials (XLI, -0.22%) to cap the quintuple feat. Technology (XLK), consumer discretionary (XLY), communication services (XLC), and financials (XLF) have all moved to 52 week and/or all-time highs. Here's an updated look at the XLI: 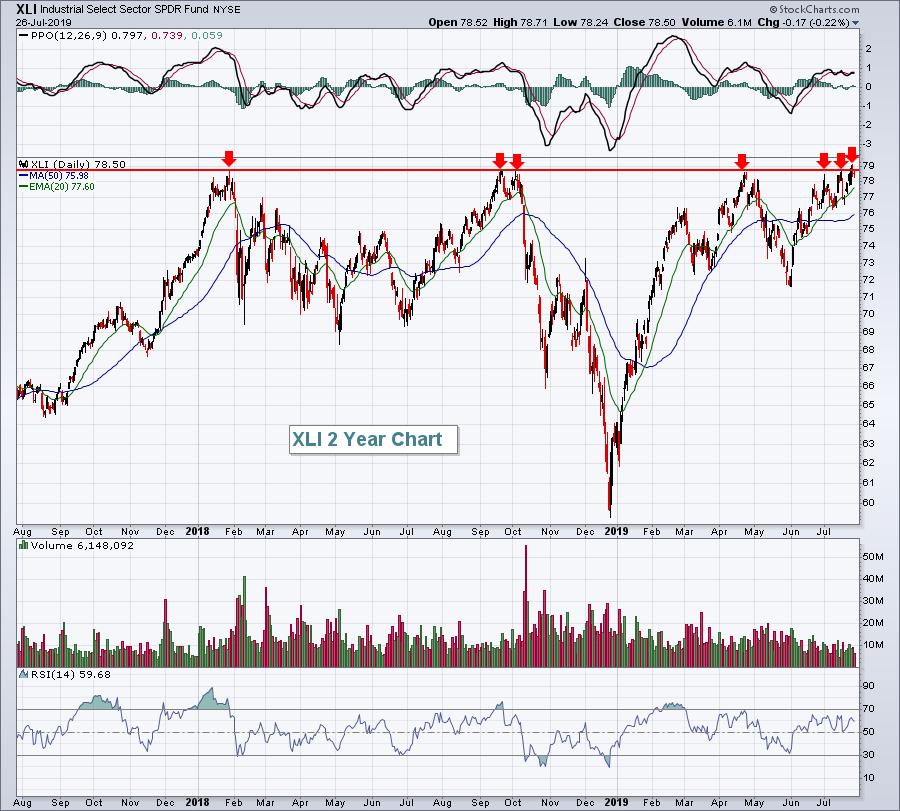 We had that breakout last week, but it was elusive as selling quickly kicked in and the XLI lost its 79 breakout level. The next push above 79 will likely be a big one.

Computer hardware ($DJUSCR, +0.35%) is at a very interesting level as Apple, Inc. (AAPL) gets set to report its quarterly earnings tomorrow after the bell. The future direction of the DJUSCR is no doubt subject to Wall Street's reaction to AAPL's report. Here's how the DJUSCR looks right now: 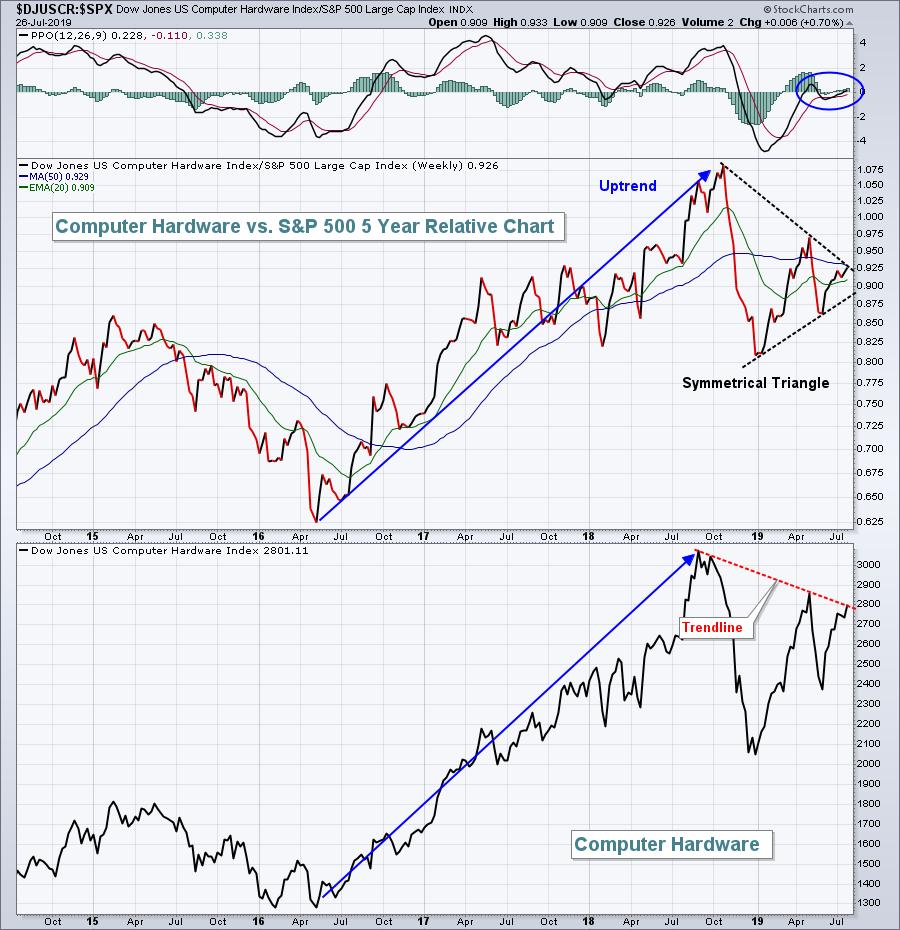 The downtrend line in the DJUSCR is being tested and the relative strength of the DJUSCR vs. the benchmark S&P 500 could be on the verge of a symmetrical triangle breakout. Tomorrow's report will likely be the catalyst one way or the other. If money begins rotating more into computer hardware, however, one company could benefit much more than the others. Roku, Inc. (ROKU) has been a leader through all the computer hardware weakness. What might happen if the group actually begins attracting much more money? 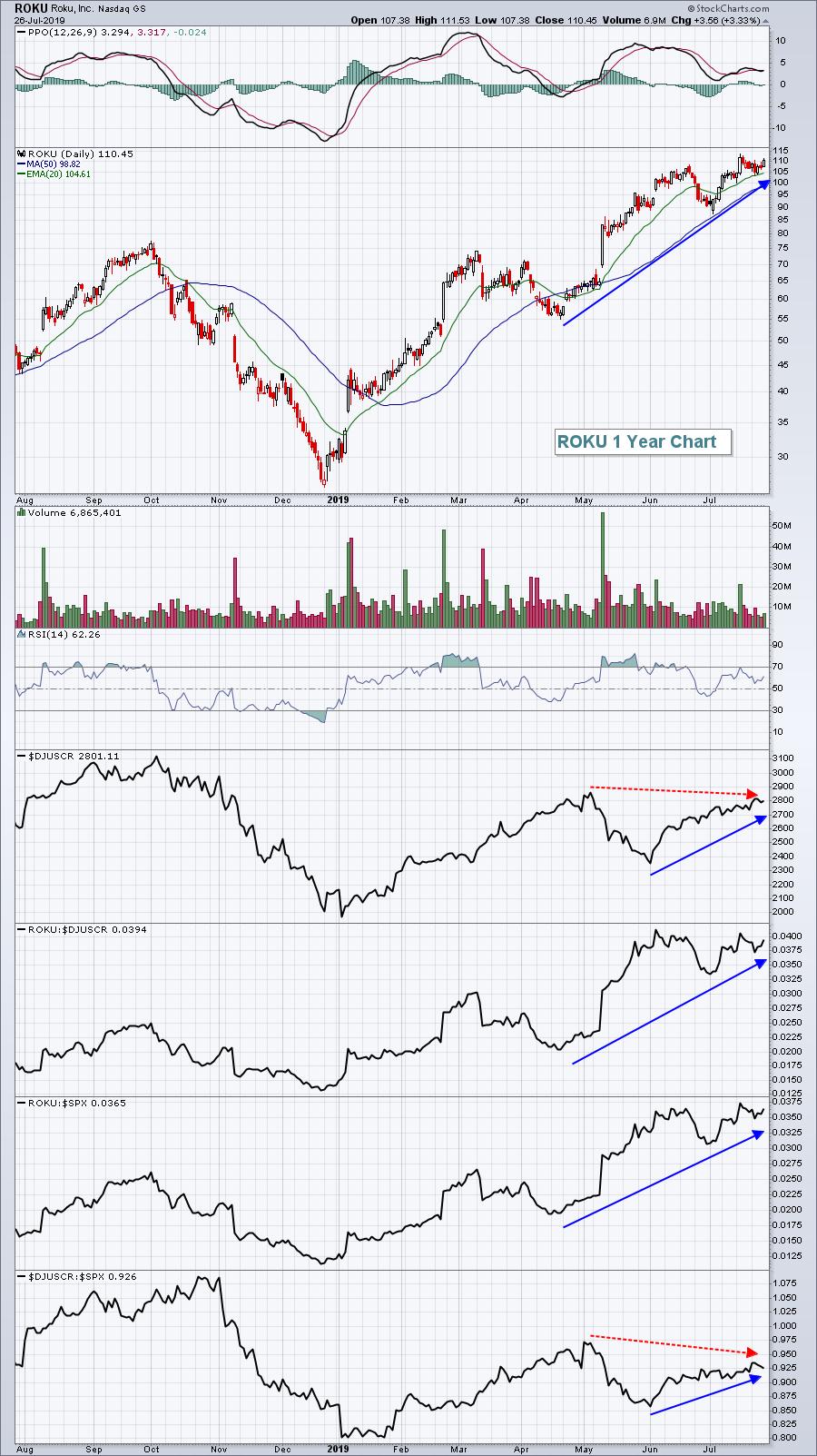 ROKU has been a tremendous performer in my Model Portfolio, which is up 46.39% since its inception on November 19, 2018. The S&P 500, by comparison, is higher by 12.45% since that date. Uncovering emerging stars is my passion during earnings season. Today, after the close, I'll be discussing the performance of my portfolios, their selection process, and disclosing several stocks that have already reported excellent quarterly results, perhaps becoming next quarter's "ROKU". Join me if you can. Today's webinar starts at 4:30pm EST - CLICK HERE for more information.

Dollar General (DG) has held up extremely well, despite the big drop recently in specialty retailers ($DJUSRS). I believe that will translate into another surge in DG. Here's the current chart: 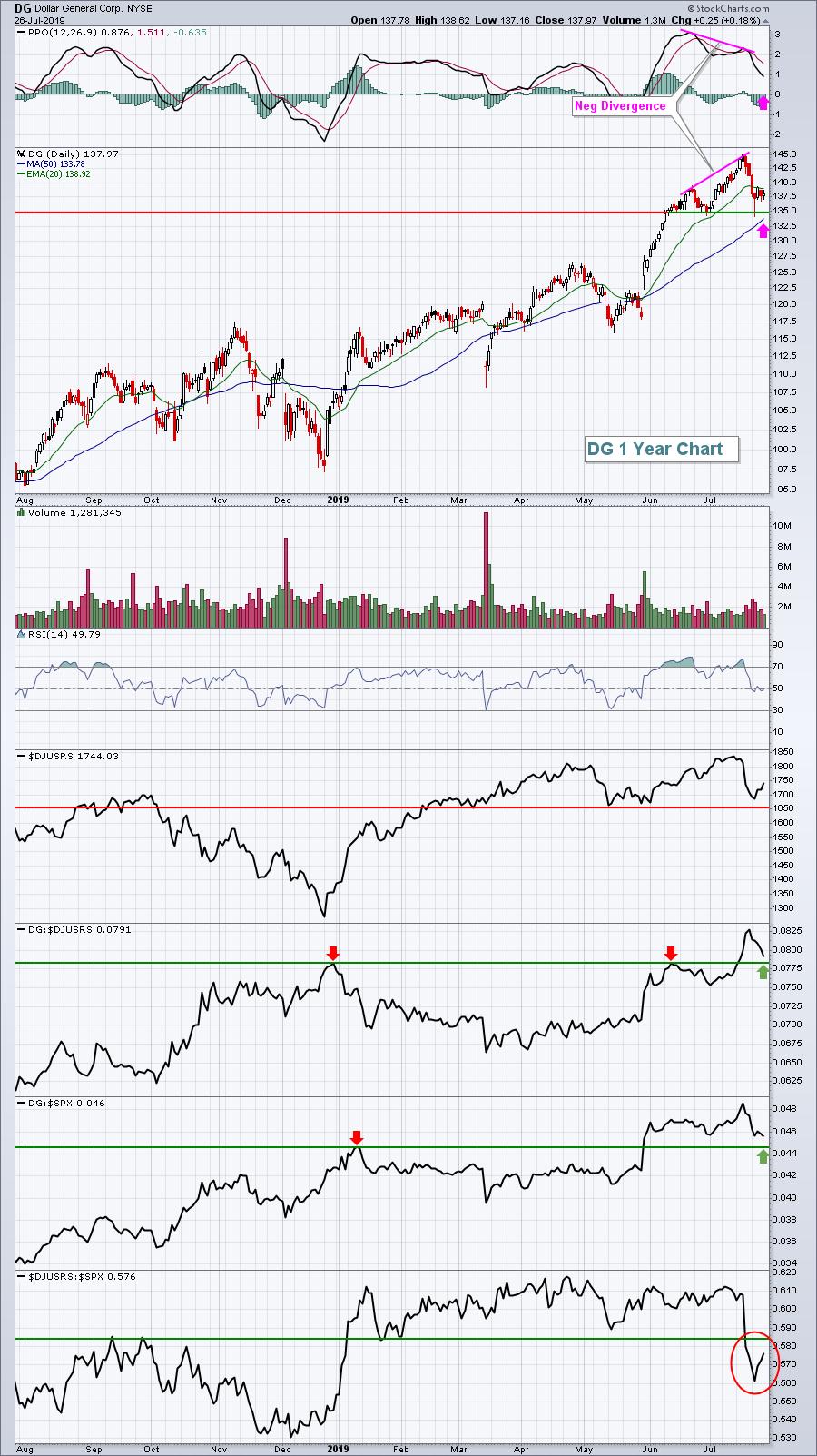 The breakdown in the bottom of the chart in the DJUSRS certainly has contributed to DG's weakness. But don't forget there was a negative divergence as well. Combine a weak industry group and slowing momentum and you get a stock that typically struggles. It's held up extremely well though. I believe accumulating DG down to the 135 level makes good technical sense. Consider a closing stop beneath the lesser of the 50 day SMA (currently 133.78) and 134.00. My target would initially be 145.00, although I expect DG will break out again.

Mondays have been the worst performing calendar day on the S&P 500. They've performed particularly poorly between the 18th and 25th calendar days of the month, which coincides with the first Monday after monthly options expiration.