Well, thank you China. On Thursday morning, China pledged a calmer approach to the trade war and indicated they would not retaliate for the latest tariffs imposed by the U.S. At least not now. Temporarily, that appeased traders who used the opportunity to buy some beaten-down areas of the stock market, most notably retailers. The widely-diversified retail ETF (XRT, +1.52%) managed to close above its 20 day EMA for the first time during August, but pockets of retail were even stronger. Home improvement retailers ($DJUSHI) were able to make a key breakout and are featured below in the Sector/Industry Watch section. Apparel retailers ($DJUSRA, +2.83%) also showed strength once again, closing at their highest level in August. Finally, footwear ($DJUSFT, +2.36%) were right on their "heels", closing above its 20 day EMA yesterday and both its 50 day SMA and prior August highs yesterday.

Other areas that have been heavily impacted by the trade war took refuge from the new development. Heavy construction ($DJUSHV, +2.53%), commercial vehicles & trucks ($DJUSHR, +2.50%), and semiconductors ($DJUSSC, +2.30%) all outperformed the major indices.

Speaking of those major indices, relative strength yesterday was found in more aggressive areas as the small cap Russell 2000 ($RUT, +1.63%) and NASDAQ ($COMPQ, +1.48%). In addition, technology (XLK, +1.74%) led a sector leaderboard that showed perfection - all five aggressive sectors gaining 1.50% or more and outperforming the benchmark S&P 500 and taking the top 5 spots. Aggressive buyers returned, which is a positive development, but we still need to see a breakout from the August trading range.

Specialty retail ($DJUSRS) had really taken a relative tumble to the S&P 500 over the past 7 weeks. A key component stock - Ulta Beauty (ULTA) - had actually held up relatively well vs. its specialty retail peers and had an opportunity to jumpstart the group as it reported earnings yesterday after the bell. Ummmm, that didn't happen. ULTA missed its earnings expectations and then lowered both their revenue and earnings guidance for FY20, citing "industry-wide sales headwinds". That doesn't sound good for the entire industry and perhaps helps to explain the recent underperformance by the entire group. ULTA is down 25% in pre-market trading.

Crude oil ($WTIC) is down close to 1% this morning with the 10 year treasury yield ($TNX) flat. Asia was mixed overnight, while we're seeing more strength in Europe. That's leading to some bullishness here in the U.S., with Dow Jones futures up 143 points at last check.

The back and forth, yo-yo type conditions that we've seen throughout August have yet to let up. The last two days we've seen strength and this morning futures are higher once again. But we've seen this movie before, on a few occasions actually. We get a nice run going to the upside, hourly momentum (PPO) turns higher....and then we fail at rising 20 hour EMA support. A trending market should hold that moving average. The fact that we haven't been able to for four weeks now tells me that we remain in consolidation mode. As a momentum traders, trading sideways with a wide trading range and high volatility ($VIX) is a bad, bad thing: 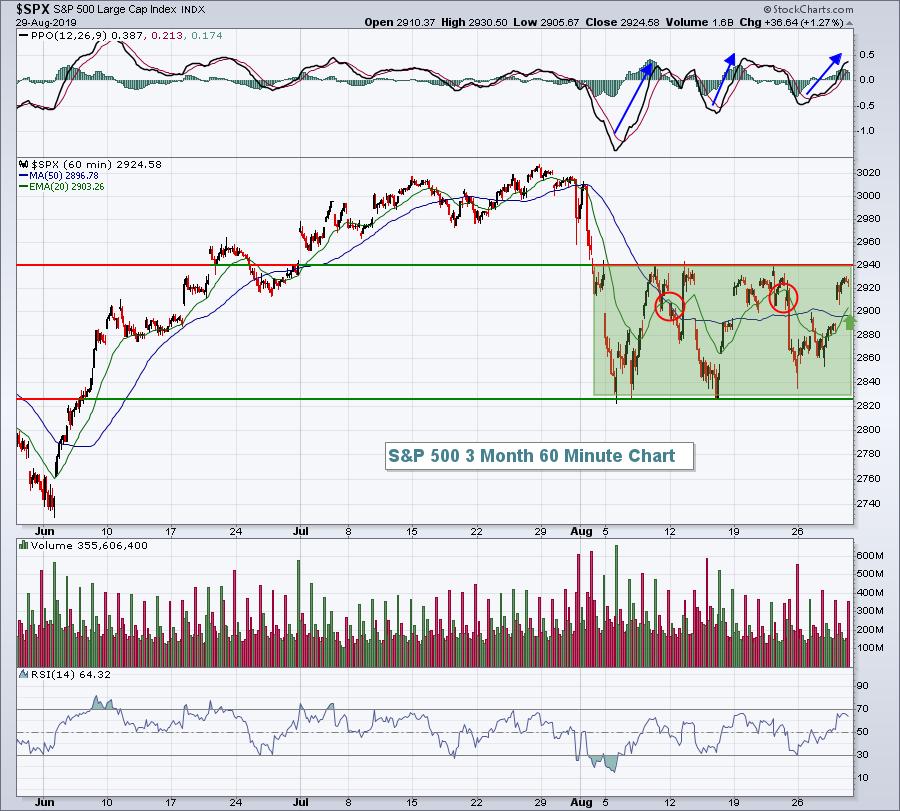 That's a three month look at the S&P 500 and the last month has been spent in that green shaded area. It's a fairly wide trading range with every move from the bottom to the top (and then back again) representing a 4% move. We've made this move 6 times in 4 weeks, fairly remarkable and quite dangerous to a short-term trader. If you buy in the face of extreme fear (VIX in mid-20s) and sell while the market is in a good mood, you're golden. That is easier said than done when tweets cause rapid 3% declines and the market behaves irrationally.

Let's see if today finally gets us over the hump or leads to more of the craziness that we've seen thus far in August.

The combination of historically low interest rates and a strong consumer has resulted in another breakout for the home improvement group ($DJUSHI, +2.84%). In addition to a strong day on Thursday, the DJUSHI is up nearly 5% for the week and has broken to fresh new highs: 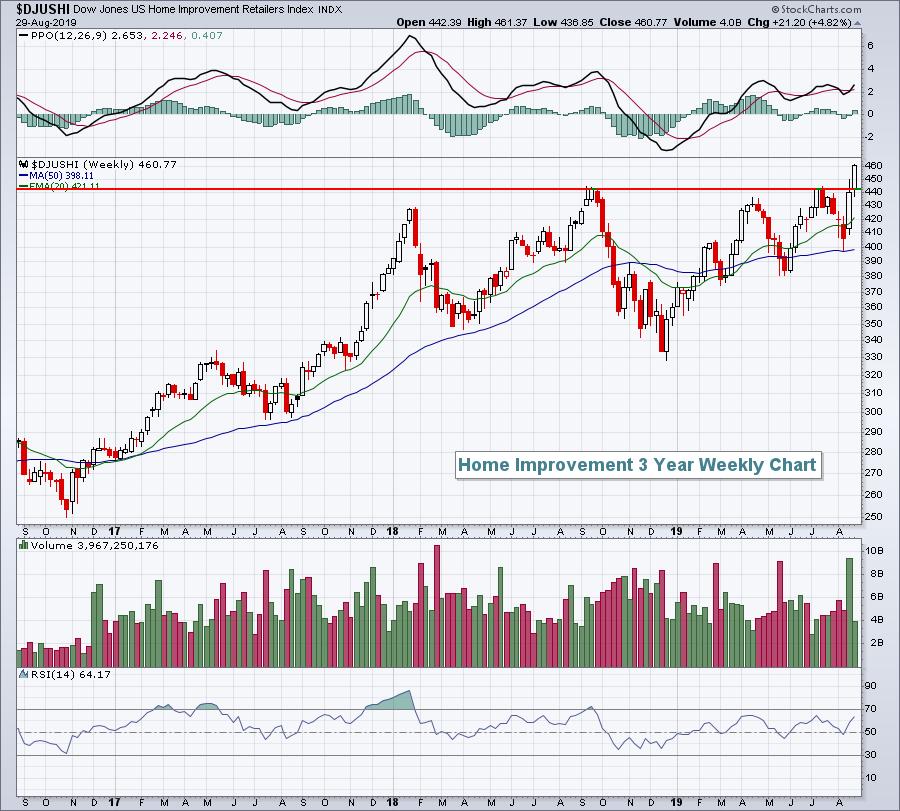 Should the overall market perform well through September, home improvement appears poised to be among the leading industry groups.

For frequent looks (3 days a week) at earnings reports and relative strength, please join me and the rest of the EarningsBeats.com community by subscribing to our free EB Digest newsletter. CLICK HERE to sign up!

The good news is that our major indices typically perform well at the very end of August and the first couple days of September. The bad news is that Labor Day weekend falls from August 31st through September 2nd, erasing those historically bullish calendar days.