I received an email the other day after I discussed the rising volatility ($VIX) and likely move lower and it stated "Tom, I thought you were bullish. Why the bearish view now?". Let me address this because maybe some others are asking the same question.

I AM BULLISH. We are in a secular bull market that, in my opinion, is still in the very early stages. A mountain of money will rotate from overbought global treasuries to fuel a massive stock market rally. GDP in the U.S. still remains healthy, jobs are strong and interest rates are near historic lows. It's a PERFECT environment for stocks. But the stock market is facing hurdles in the short- to intermediate-term that rear its ugly head from time to time, causing fear and panic and sudden selloffs that are currently unavoidable. They are part of investing in the here and now. Trying to short the stock market and remaining on the short side is an incredibly dangerous strategy, however. Yesterday, one piece of mildly bullish trade news and the Dow Jones moved up nearly 600 points in 45 minutes. Imagine a trade deal!

While I'm very bullish in the intermediate- to long-term, it's a big mistake to stick your head in the sand when the VIX jumps into the 20s and short-term moving averages fail to hold as support. That's what we have now. How far does it drop? I don't know. Probably when the trade war fears ease, just like they did in late-December and early-June. The problem with timing a bottom is that if you're off by a day or two, your portfolio can get clobbered. I've said it before and I'll say it again. Trading stocks in a highly volatile market is crazy. I sit these types of markets out until I see a major reversal at or near key price/moving average/trend line support and with volatility readings near levels where we've seen major reversals in the past. I'm not sure we're there yet, so I am remain cautious near-term. From a price perspective, yesterday's big advance really did nothing to the short-term daily outlook on the S&P 500: 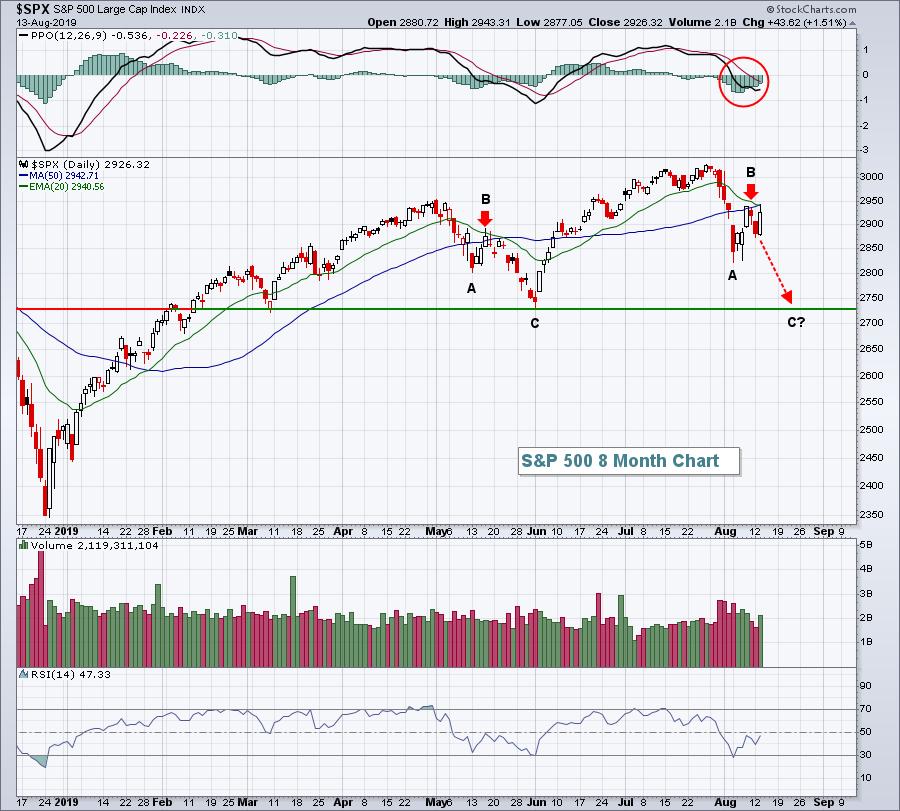 Watch those two moving averages - 20 day EMA and 50 day SMA - to the upside and the early August low to the downside. Which way do we break first? That will be our first clue.

On Tuesday, the White House announced that it would delay tariffs for some items imported from China to include cell phones and laptops. As you might imagine, Apple, Inc. (AAPL, +4.23%) helped to lift the computer hardware group ($DJUSCR, +3.97%). Technology (XLK, +2.52%), as a whole, was the primary beneficiary, although the widely-diversified retail ETF (XRT, +1.62%) performed very well too, lifting consumer discretionary (XLY, +1.65%).

The bulls are right back on the defensive with Dow Jones futures down nearly 400 points. The 10 year treasury yield ($TNX) is down 7 basis points to 1.61% and the yield curve has inverted. An inverted yield curve has been present before the last several recessions, so that is giving bears ammunition to take prices lower.

Macy's (M) has been underperforming for quite awhile and this morning we saw the fundamental reasons why. M missed its earnings estimate badly and lowered its guidance with the shares down another 16% in pre-market action. It's another great example why understanding relative strength is so important. Wall Street has been bailing on M for months. There's little sense to catch that falling knife, especially as it morphs into a machete.

I looked at the shorter-term daily chart of the S&P 500 in the Market Recap section above. Let's look at the longer-term weekly chart and hopefully you'll understand my more bullish Big Picture view: 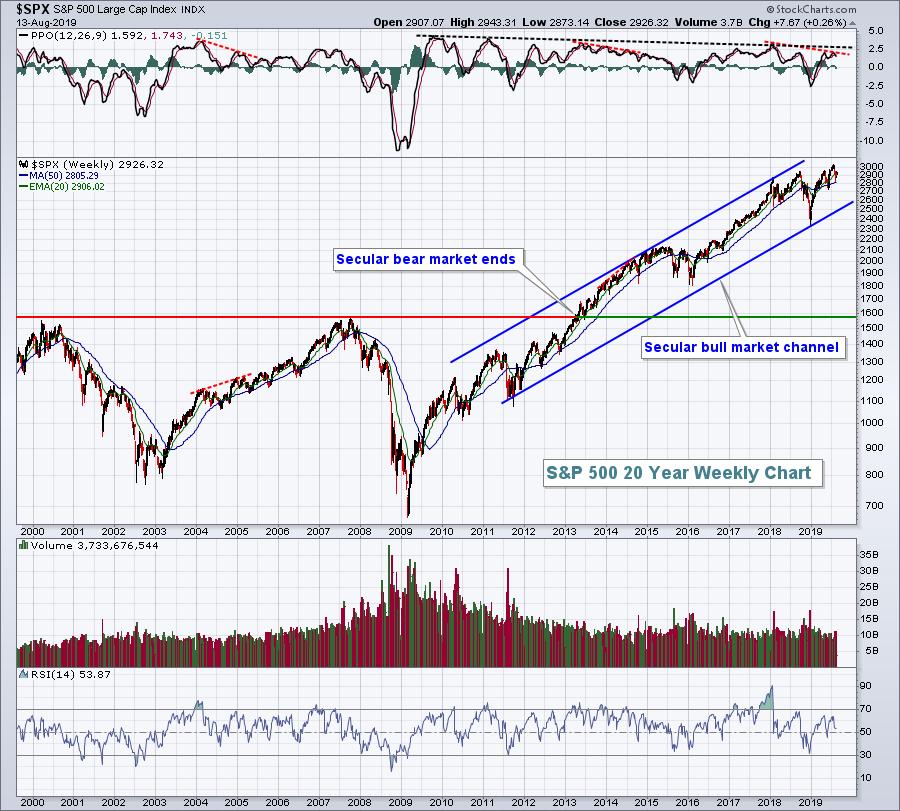 Could we see more downside near-term? Absolutely. I think the odds are greater than 50-50 that we'll move below the early-August low. But while others grow more fearful, I'll be looking at it as a major opportunity to buy cheaper in a secular bull market.

The Dow Jones U.S. Apparel Retailers ($DJUSRA, +3.09%) surged on Tuesday, but remains in a huge symmetrical triangle, not really providing any signs just yet on which way this index will go: 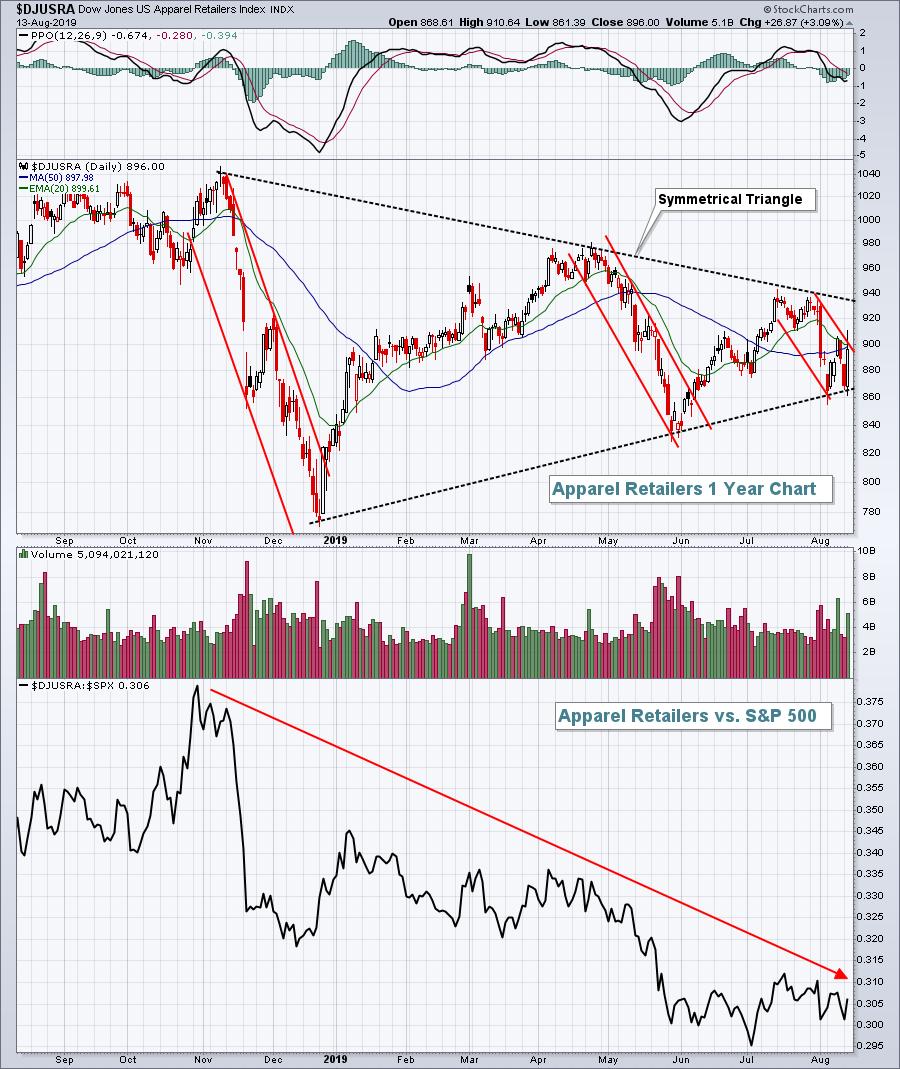 The down channels in Q4 2018, May 2019 and over the past couple weeks have coincided with intensifying trade fears. The key trading range to watch is 860-940. Which way will it break?

We're nearly halfway through August, so it's probably not a bad time to consider what the next couple months might hold. In doing so, it would be remiss on my part to ignore the seasonal strength of internet stocks ($DJUSNS) in both September and October: 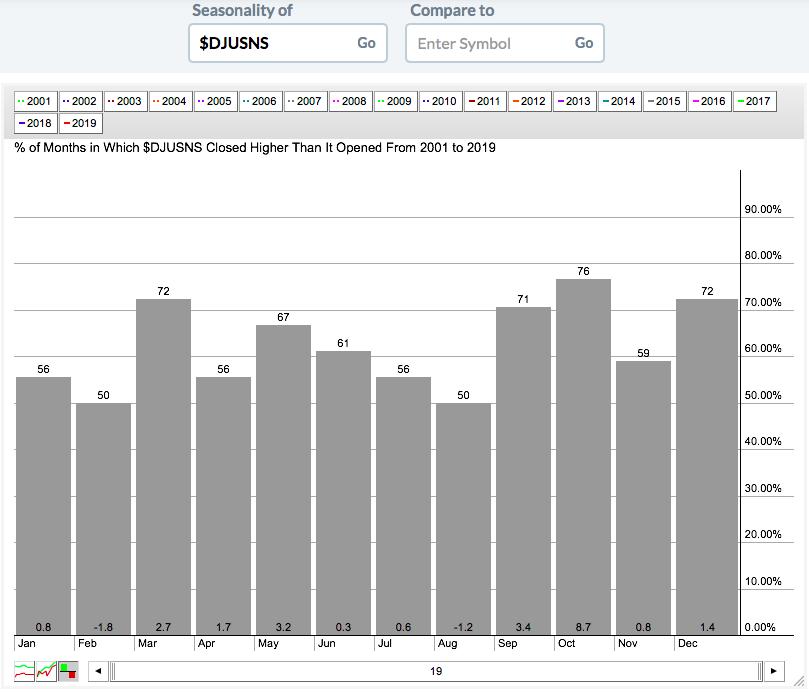 Over the past 19 years, this group has averaged gaining 12.1% during just those two months. Using relative strength, I'll be looking to uncover a few of the better looking charts in this space. They may end up finding a spot in one or more of portfolios.

On Monday, I discussed my methodologies for selecting stocks in my portfolios - which have crushed the benchmark S&P 500 since their respective inceptions. I'd like for you to review this webinar recording and judge for yourself. It's probably an hour long, but well worth your time. If you're not already at least a free EarningsBeats Digest newsletter subscriber, you can CLICK HERE to become one.

Finally, if our service sounds appealing to you, we're running an annual special, which is the best deal we've ever offered. Here's the LINK to sign up.