I think most technicians would agree that stock market action into the close is generally much more important than stock market action just after the open. That is magnified even further when we have a major event take place intraday. Yesterday, we had a widely anticipated Fed meeting with growing concern that the Fed would not lower rates. A week or two ago, the market was indicating about a 90% chance that the Fed would cut rates a quarter point. By yesterday, many in that camp had reversed course and the market was suggesting there was only a 50-60% chance the Fed would cut rates. It's been very difficult to predict what this Powell-led Fed might do, so many market participants had been moving into value-oriented stocks over growth-oriented stocks heading into this meeting.

Therefore, the response to the Fed's actions would be quite meaningful and literally could have a major impact as to how the market trades in Q4 and into 2020.

The Fed lowered rates by that quarter point expected and the stock market's and bond market's reaction was EXTREMELY positive by the close - in my view. Money rotated towards aggressive areas of the market into the close after the initial (and mostly normal) "knee-jerk" reaction lower immediately after the Fed policy statement was announced.

I have a very detailed analysis of how every index, sector, and industry group performed and that could be critical to how the market continues to perform over the intermediate-term. Suffice it to say that value stocks, which had been in favor during September, took it on the chin in the final hour yesterday. The stock market LOVED what it heard from the Fed and money poured back into aggressive areas. On the surface, not much changed on the growth vs. value ratio chart (IWF:IWD) when looking at a daily chart: 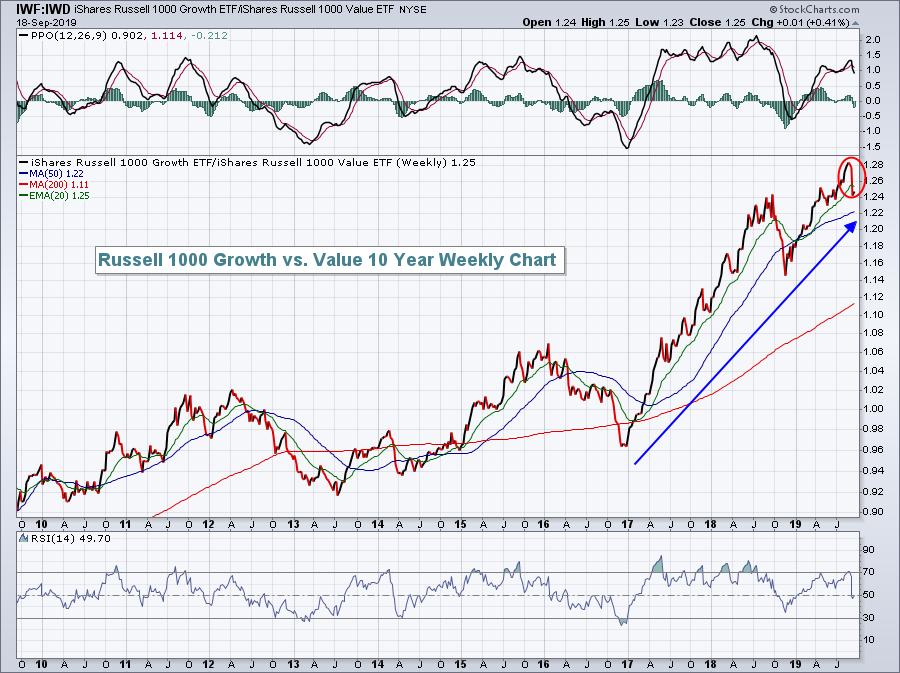 You can see that steep drop in this ratio over the past couple weeks and it really doesn't look like yesterday did much to change it. However, I can tell you that from Wednesday's post-Fed low after 2pm EST through the close, the IWF spiked 1.15% (well above the S&P 500's 0.95% rise), while the IWD gained just 0.68%. In other words, the IWF performance nearly doubled that of the IWD. Buyers of growth stocks were back in full force.

There was one industry group in particular that surged yesterday after the announcement and it's a group that's been on fire on a relative basis over the past 3 months. It is perhaps the most rapidly improving industry group and Wall Street is accumulating shares. This is an industry group that will almost surely have representation in my portfolios next quarter and is a group that everyone should be looking at. I'll provide very compelling evidence in my EB Digest newsletter article tomorrow, so if you're not currently a subscriber, please do so by signing up HERE. It's completely free and is one way we can keep our EarningsBeats.com community up-to-date on breaking news and technical developments.

While the overall Fed announcement yesterday could still be viewed as "mixed", I was pleasantly surprised to see the Fed turn a bit more accommodative and I believe that will go a long way in establishing new record highs for our major indices in Q4 and beyond.

PS. I'm posting my EB Daily Market Report this week and I'd like for you to check it out at no cost. CLICK HERE to see the type of information that I include in it each and every day for our EB members. Give some consideration to joining and trying it out for 30 days at a special $7 rate. Thanks!