An exponential moving average (EMA) puts more weight on recent prices and less weight on older prices. This reduces the lag, but does not completely remove the lag. EMAs react quicker to price moves and are often closer to the current price after a strong directional move.

The 200-day EMA and 200-day SMA often converge during long and steady trends. The chart below shows both moving averages from June-August 2013 until August 2014. The EMA was closer to the actual price in July and August, but the SMA closed this gap as the trend extended. These two moving averages were virtually identical from October 2013 to August 2014.

The 200-day EMA performed the best with a 7.02% annual return, a better Risk-adjusted Return and a better Maximum Drawdown.  Before leaving this table, notice that losing trades outnumbered winning trades by three to one. There 151 losing trades because of whipsaws around the 200-day moving averages (EMA and SMA). This underscores the significance of the 200-day moving average as an important level for the S&P 500. It is where trends start and it is also a battle zone. 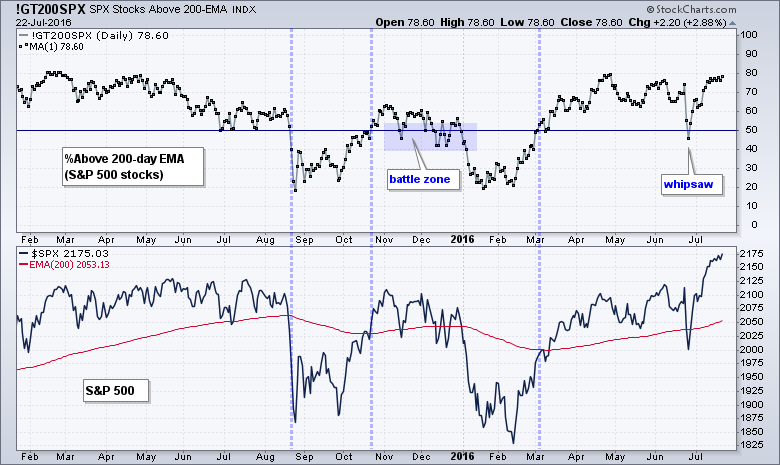 The chart above shows S&P 500 Stocks Above 200-EMA (!GT200SPX) with a horizontal line at 50%. This indicator tells use the percentage of stocks in the S&P 500 that are above their 200-day EMA (the rest are below). The S&P 500 is shown in the lower window with the 200-day EMA in red. In general, we can see that crosses above/below the 50% level coincide with crosses of the 200-day EMA. There was a battle around the 50% level in November-December as the index battled the 200-day EMA with several crosses. There was also a whipsaw in late June with the reaction to the Brexit vote.

There is always a trade-off when looking for the perfect signal. Sensitive indicators will trigger quicker signals and this will result in more whipsaws (bad signals). Smoothing the indicators will add some lag to the signals and reduce the whipsaws. This means the entries and exits will not be as good.

Chartists must first decide how they wish to use the indicator. I am using the Stocks Above 200-EMA to help define the environment for the stock market as a whole. Is it bullish or bearish? The definition of long-term is also open for debate. For me, it is anything longer than two months. I basically have a short-term outlook (1-8 weeks) and a long-term outlook (2+ months). Anything more just gets too complicated for me simple brain.

Chartists should expect signals to lag because the Stocks Above 200-EMA is a trend following indicator by nature. My goal is not to reduce lag, but to reduce the whipsaws by ignoring insignificant moves in the indicator. The chart below shows the 10-day EMA of S&P 500 Stocks Above 200-EMA with a bullish threshold at 60% and a bearish threshold at 40%. This is like a double smoothing. First, I am smoothing the indicator itself by adding a 10-day EMA. Second, I am setting the signal thresholds above and below 50%. 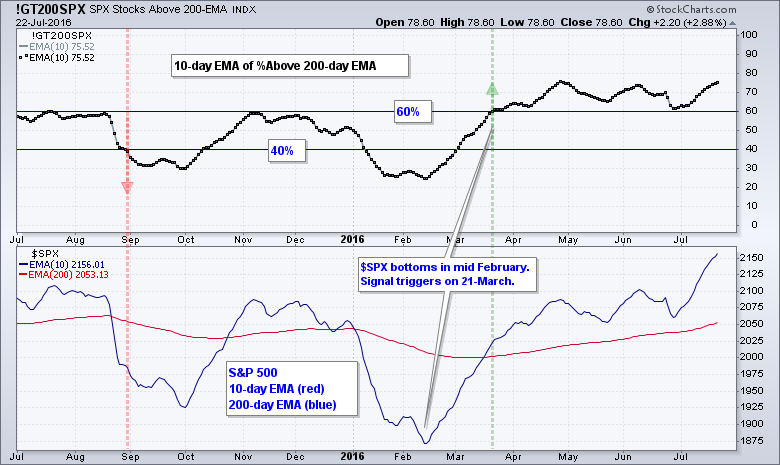 As seen from the number of losing trades in the backtests and the first chart, the 200-day EMA can be quite the battle zone. This is why I am looking for significant signals instead of mere crosses above/below 50%. It is of bullish significance when more than 60% of stocks trade above the 200-day EMA. Conversely, it is of bearish significance when fewer than 40% trade below their 200-day EMA. What happens between 41% and 59% is anybody's guess. Basically, I am avoiding the 50% area on purpose because this is a big battle zone subject to whipsaws. I am looking for a signal that the battle is over and a clear winner has emerged. 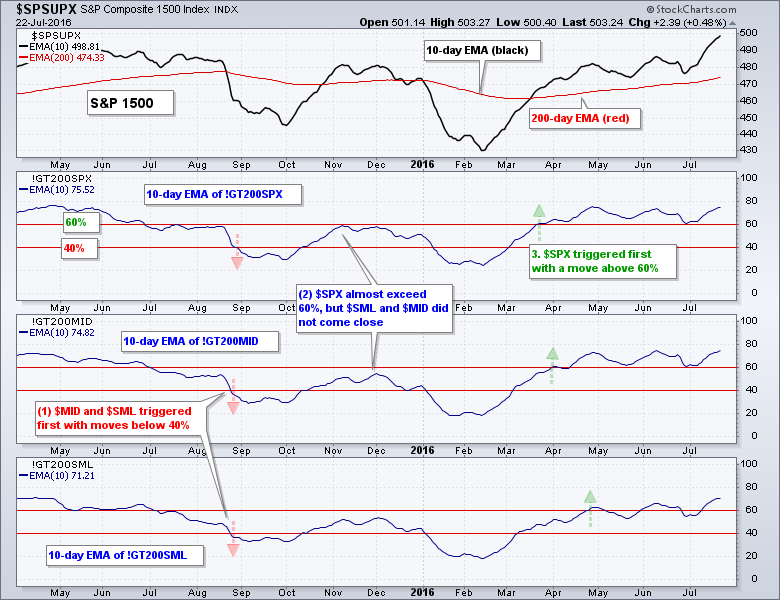 The Stocks Above 200-EMA is a breadth indicator we can use to determine participation levels in a trend. As with High-Low Percent, its signals will lag and trigger after the market has turned. As a trend-following indicator, it is designed to keep me on the right side of the market. The bulls have a clear edge when the 10-day EMA of Stocks Above 200-EMA exceeds 60% for two of the three indexes. This edge remains until there is enough selling pressure to push two of the three indicators below 40%. Moves below 50% can still be part of a correction and this is why I am looking for more selling pressure before turning bearish.

%Above Moving Average Symbols at StockCharts

StockCharts calculates and publishes the Stocks Above EMA data for dozens of (several indexes and the nine sectors). These include the Dow Industrials, Nasdaq 100, Gold Miners ETF and the nine sector SPDRs. Chartists can find this list by searching the symbol catalog for "above 200-EMA". We also calculate for the 20-day EMA and 50-day EMA. Just substitute 20-EMA or 50-EMA for 200-EMA in your symbol search. 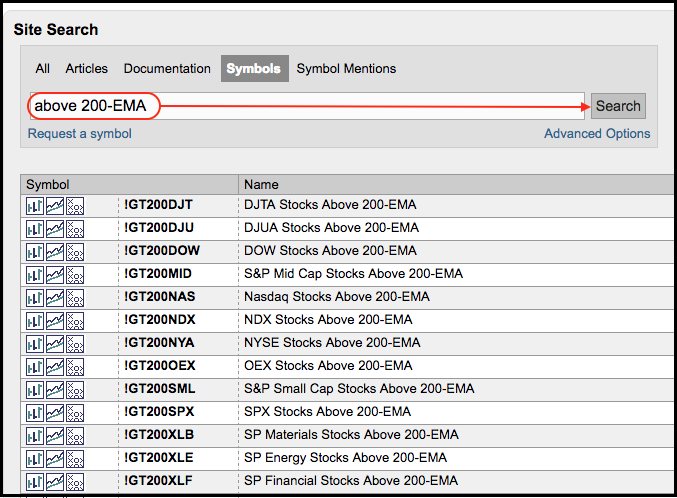 The charts shown in this article can serve as templates for creating other breadth indicators. Users can click on these charts to open them in the SharpCharts workbench. The indicators settings will then be visible below the charts. Simply replace the existing symbols with other Stock Above EMA symbols to create different charts. Users can then click "save as" and place them in a ChartList for future reference.