Seasonal patterns are the talk of the town with "go away in May" taking center stage. Thankfully, we have the means to test the classic six-month cycle and see how it actually performed over the last twenty years. Today I will put this cycle through the wringer and offer some adjustments for improvement. I will then build on these adjustments by adding some simple trend indicators for timing. The end result is pretty good and gives us something to watch as June draws near.

It is hard to measure a strategy's effectiveness with a visual inspection so I decided to put it to the test. The testing period ranges from May 1997 to May 2017 (20 years) and covers two bear markets, as well as three bull markets. Note that SPY was up over 300% during this timeframe with a Compound Annual Return of 5.62%. This buy-and-hold period, however, included two drawdowns that were around 50% each. 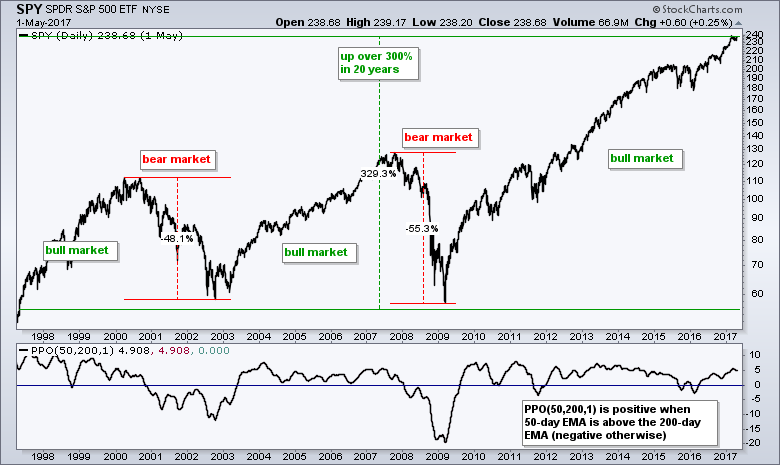 The table below shows performance for buy-and-hold, the best six months, the worst six months and the golden cross (50-day EMA crossing above 200-day EMA). There is clearly some merit to the best-worst six month periods because the November to April period clearly outperformed the May to October period. Buying on November 1st and selling on May 1st returned +5.83% per year (green shading) while buying on May 1st and selling on November 1st resulted in negative returns (red shading -.21% per year).

A look at the Seasonality chart for the S&P 500 SPDR (SPY) shows a four month stretch between June and September with consistent weakness. On average, SPY closed higher just 52.75% of the time during these four months. Moreover, the ETF averaged a 1.1% loss over this stretch. In an interesting twist, July closed higher just 47% of the time, but the average gain/loss was a .40% gain. 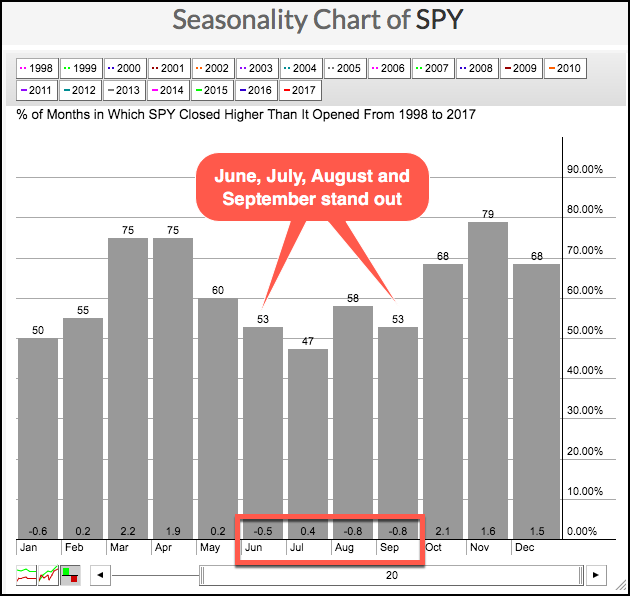 Based on the seasonality chart above, I ran some tests and came up with the best eight months strategy. Basically, one buys on October 1st and sells on June 1st, thus avoiding the dog days of summer and September. The table below shows the results outperforming the best six months strategy. Notice that the Compound Annual Return was 7.85% and the Win% was 85% (green shading). In contrast, the Compound Annual Return was a negative 2.37% when buying on June 1st and selling on October 1st (red shading). This four-month stretch is clearly the weakest of the year over the last twenty years. 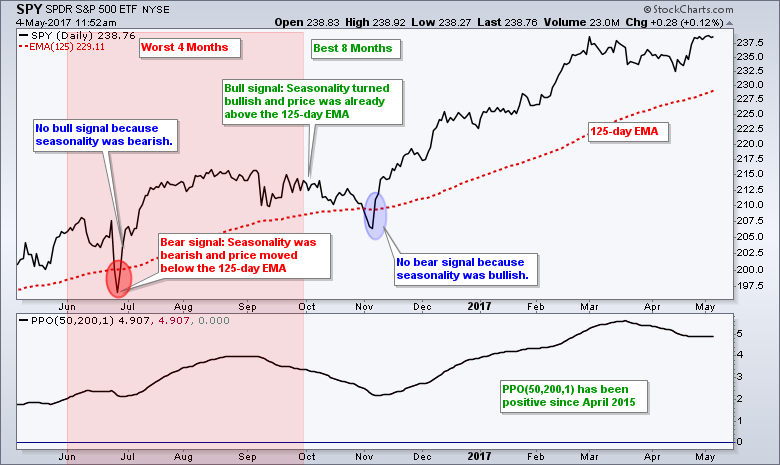 Backtest Results for Seasonality Plus Timing

The table below shows the results for seasonality and timing. The golden cross with seasonality worked a little better than the golden cross without seasonality (first table). Seasonality combined with the 125-day EMA cross returned almost 10% per year over the last twenty years. There were two big drawdowns during this period (-23.08% in 2002 and -18.76% in 2008). The five largest drawdowns averaged 16.3%, which is not too bad for a 9.8% Compound Annual Return and a 14.16% Risk-adjusted Return.

There is clearly something to be said for the worst four-month period, which includes the dog days of summer and September. The S&P 500 SPDR is up some 15% from its November low and still in bull mode with the worst four month period right around the corner. Even so, the trend is clearly up and the trend holds more sway than seasonality. Chartist can watch two things as June nears. First, a break below the April low (support) would be negative. Second, a close below the 125-day EMA during June would suggest that a correction is underway and the fish are biting. In other words, that might be the signal that it is a good time to go fishing!