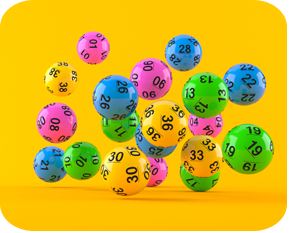 ... The Utilities SPDR (XLU), the Energy SPDR (XLE) and the Real Estate SPDR (XLRE) are the strongest sectors in the market, when measured from mid February to early August. The PerfChart below shows XLE with a 12.63% gain, XLU with a 9.73% and XLRE with a 12.18%. These three sectors are even outperforming the Technology SPDR (XLK) during this timeframe. 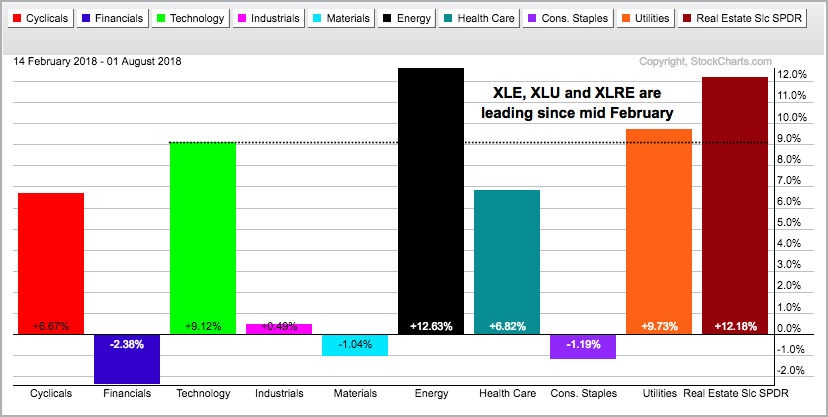 The next performance picture looks a lot different when I change the timeframe to year-to-date. Notice that the Consumer Discretionary SPDR (XLY), XLK and Health Care SPDR (XLV) are leading in 2018. XLU and XLRE are still up this year, but up much less than the others. 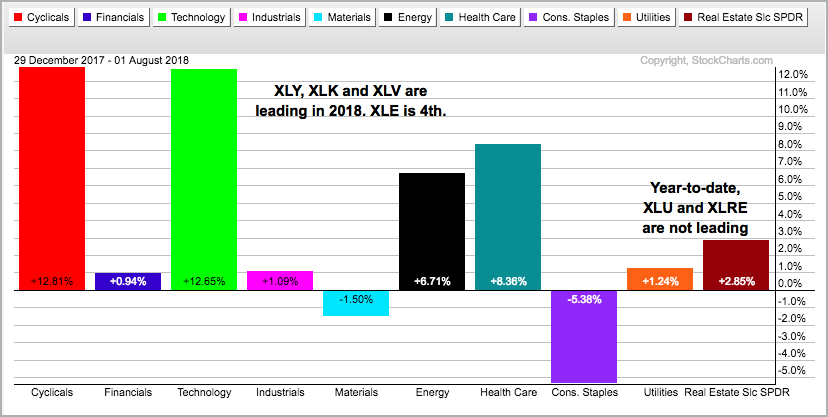 Personally, I think it is important to be consistent with our timeframes and indicator settings. Try too see what is really there on the chart, not what you want to see.

Regardless of the Performance differences, some of the best performing groups of the last few months weakened over the last two weeks and the broader market environment could be turning defensive. This means the broader market could be hitting a soft patch (correction). Corrections are normal after sizable gains and could provide us with next setups.

The next chart shows the Utilities SPDR with the Aroon indicators, which were developed by one of our blog authors, Tushar Chande. The chart shows XLU moving above its April high and then consolidating with a small triangle. An upside breakout would be bullish and target a move towards the 2017 highs. 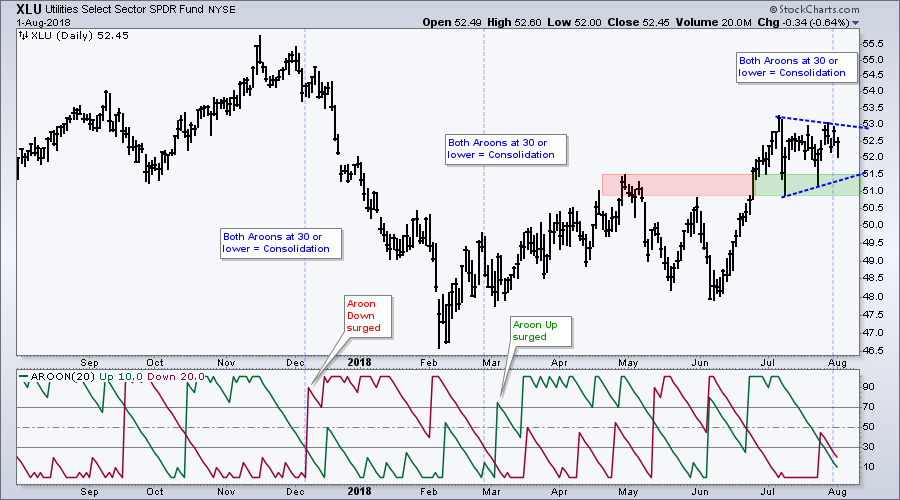 The indicator window shows both Aroons moving below 30. This occurs during a consolidation because it means there is little downside movement (Aroon Down) and little upside movement (Aroon Up). The first to break above 70 will trigger the next directional signal. For reference, the prior two signals are shown on the chart.

XLRE Breaks Out of Flag

The Real Estate SPDR (XLRE) surged and broke out of a bull flag over the last few days. The chart shows XLRE bottoming in early February and advancing over 15% from February to July. Wow. Keep in mind that this advance includes dividends because I am using dividend-adjusted data. Precede the symbol with an underscore to see unadjusted data (_XLRE). 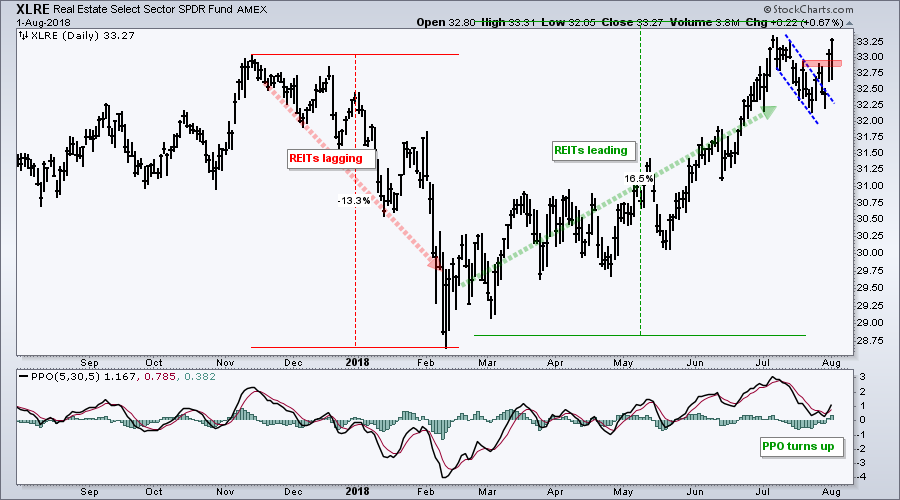 The flag breakout is bullish and signals a continuation of the bigger uptrend. The indicator window shows the PPO (5,30,5) moving below 1% and turning up over the last three days. This indicator moved above its signal line and this is a bullish momentum signal.

REITs, Utilities and the 10-year Correlation 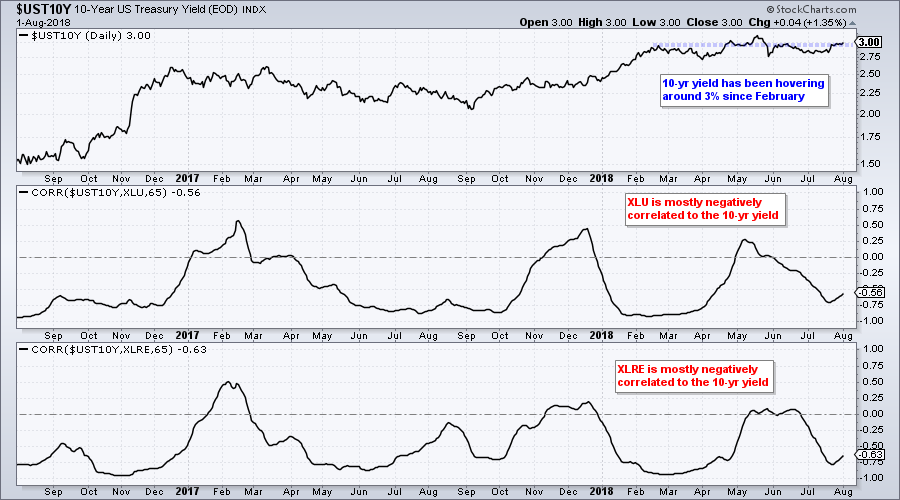 HACK Becomes Oversold in an Uptrend

Several leading industry-group ETFs were hit hard over the last 1-2 weeks and some are near oversold levels (RSI(10) below 30). Here are the RSI levels for a few: SKYY (32.63), HACK (27.85) and FDN (34.2). SKYY and FDN hit new highs in July, while HACK hit a new high in June. The long-term trends are up and this means an RSI move below 30 would set up a mean-reversion trade. The chart below shows HACK falling to the top of a potential support zone and RSI moving below 30. 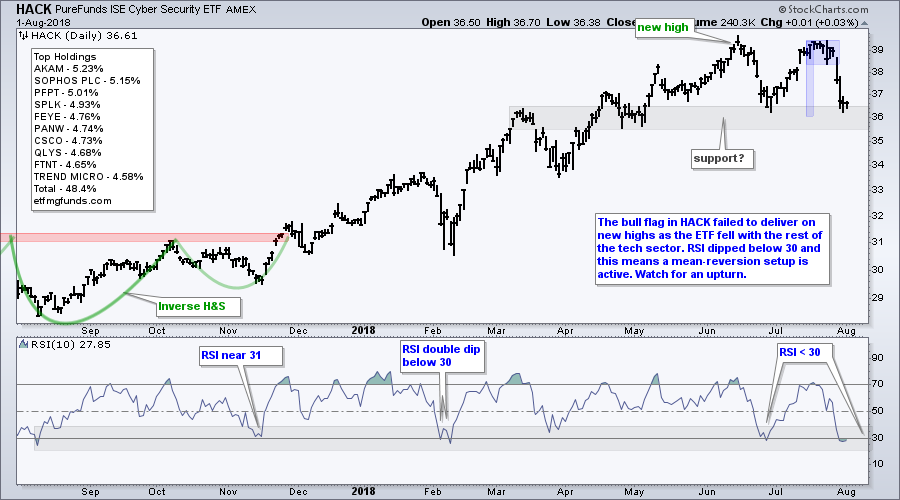 An RSI move back above 30 would trigger a short-term bullish signal. Such a signal, however, does not preclude HACK from moving lower. The market is looking a bit soft and the leaders are correcting. This means the market may need some time to settle before a decent mean-reversion bounce takes hold. This is purely a judgement call. Mean-reversion systems, which do not use judgement, would simply buy when RSI moves above 30, set a profit target and wait for a bounce, which may come in one week or one month. The key is to plan your trade and trade your plan. Get a strategy and apply it!

The Dreaded Double Dip in RSI

The next chart shows the Biotech SPDR (XBI) with RSI moving above 30. The long-term trend is up and this RSI move signals that a mean-reversion bounce could unfold. The April signal worked quite well as XBI bounced off support from the February low. The signal in late October, however, did not work so well as XBI moved lower into mid November. RSI did the double dip below 30 and the second signal turned out well. We never know how these signals will turn out, but a broad market correction or trading range over the next few weeks could produce the dreaded double dip. 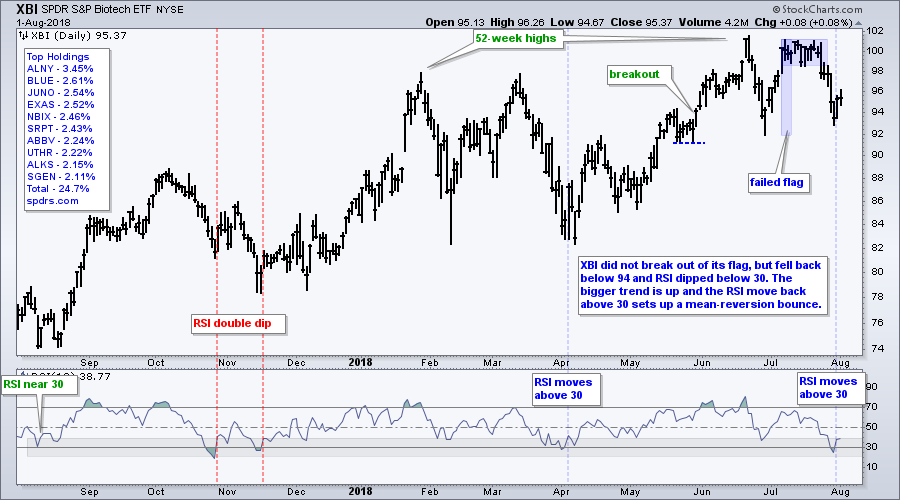