My assumptions and biases are based on the bigger trend because it is the dominant force at work. When the trend is up, I view the cup as half full and expect more bullish resolutions than bearish resolutions. This means I favor bullish setups over bearish setups, successful support tests over breakdowns and oversold bounces over overbought pullbacks.

I laid out my case for SPY and the five offensive sectors in Thursday's report (Ranking and Grouping ETFs). In short, SPY hit a new high in July and held the August low here in September. Price is above the 200-day SMA, the 20-day SMA is above the 200-day SMA and the 65-day SMA of RSI(10) is above 50. The trend is currently up and will remain so until proven otherwise. 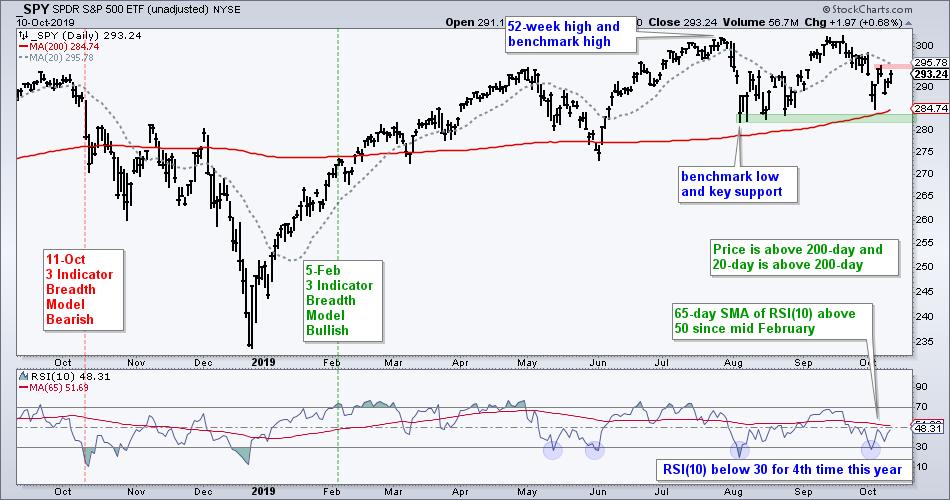 Short-term, we are seeing a lot of noise, in both price and news flow. SPY plunged below 290 with a gap last Wednesday, and then immediately recovered with a reversal on Thursday and gap-surge on Friday. SPY again gapped down on Tuesday and closed below 290, but rebounded the last two days and closed above 293. This noise is occurring within the confines of a bigger uptrend so I would still expect a bullish resolution. A break above short-term resistance at 296 would provide follow through to last week's short-term reversal and argue for a challenge to the summer highs.

The next charts shows the six biggest sector SPDRs in the S&P 500. Together, these six sectors account for some 78% of this key market benchmark. The green lines mark the August lows and five held their August lows. XLV was the only one to break its August low and is the weakest of the six. The top three, XLK, XLY and XLF, held above their August lows and show some relative "chart" strength. This is positive.

The red lines mark short-term resistance levels based on the highs from last Thursday and Friday. Breakouts in the majority of sectors  (four of six) would be bullish for the S&P 500. XLK, XLY and XLF held up the best and may lead should we see breakouts. XLI and XLC are testing their August lows and short-term breakouts would argue for a successful support test.

The next chart shows the High-Low Percent indicators for the S&P 500, S&P 400 MidCap Index and S&P 600 SmallCap Index. S&P 500 High-Low% ($SPXHLP) triggered bullish in mid February with a move above +10% and has yet to reverse this signal with a move below -10%. S&P 400 MidCap High-Low% ($MIDHLP) triggered bullish in early June and reversed this signal in mid August. S&P 600 SmallCap High-Low% ($SMLHLP) is the big laggard because it triggered bearish in October 2018 and has not been above +10% since August 2018. The lack of new highs in mid-caps and small-caps shows very little upside leadership in these two groups. 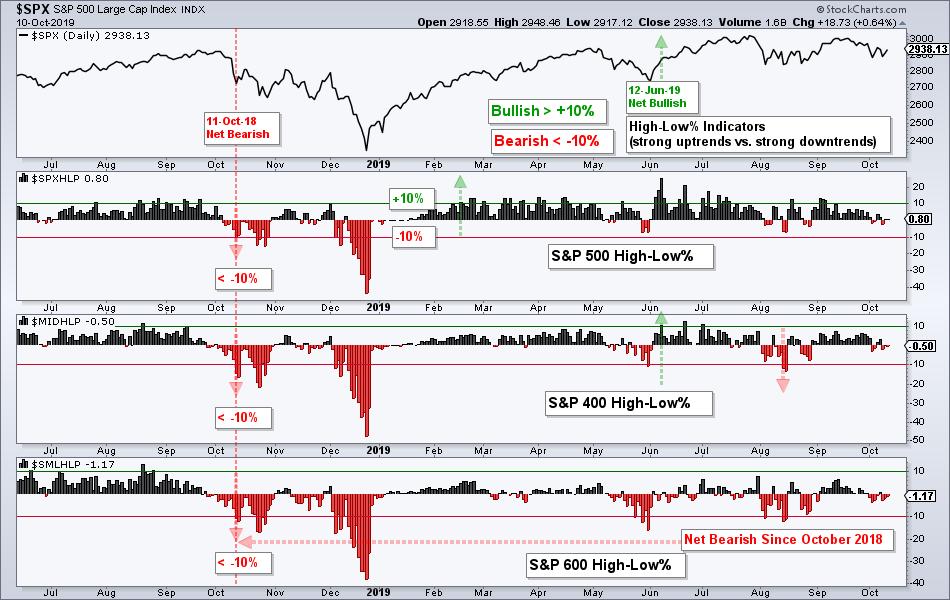 The percentage of stocks above the 200-day EMA also reflects weakness in small-caps. 57.6% of large-cap stocks are above their 200-day EMAs, but less than 50% of mid-caps (48.25%) are above and less than 40% of small-caps (39.17%) are above. The majority of small-caps and mid-caps are currently below their 200-day EMAs. The chart below shows these indicators turning bullish for the S&P 500 in early February and staying bullish, but whipsawing for mid-caps and small-caps. These latter two groups cannot get any traction. 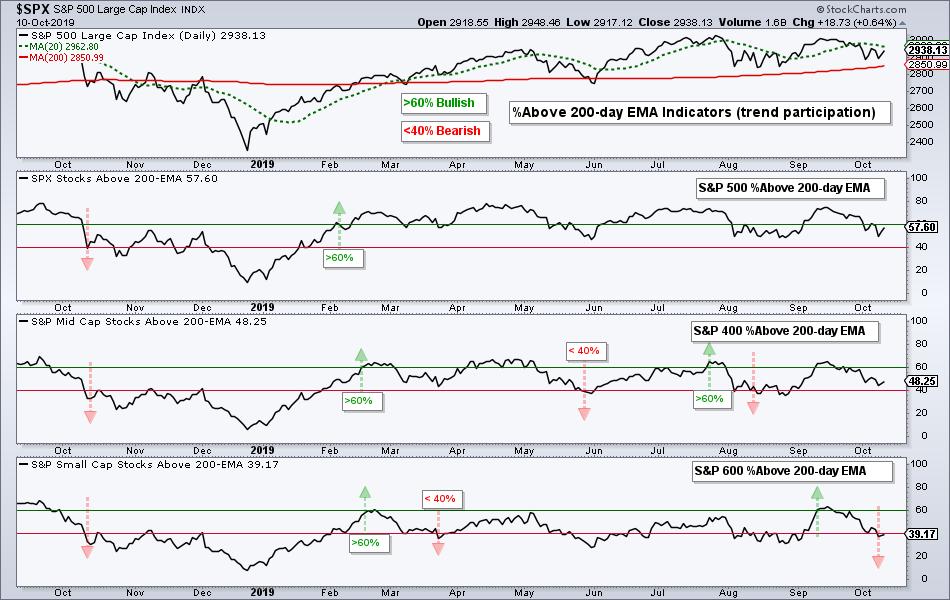 It has been a difficult year for traders active in small-caps and mid-caps. This is due to a deficit of strong uptrends, as measured by new highs and the percentage of stocks above the 200-day EMA.

The SPY chart above shows RSI(10) dipping below 30 to become oversold last week. We can also measure oversold conditions using the Percentage of Stocks above the 20-day EMA. The chart below shows this indicator for $SPX, $MID, $SML and $NDX. The indicator becomes oversold with a move below 20%. This is still the falling knife stage, but it provides the alert to watch for a bounce. A subsequent move above 50% then acts as the short-term bullish trigger. The green lines show signals in early June and late August. Currently, the Nasdaq 100 is holding up the best and the closest to triggering. 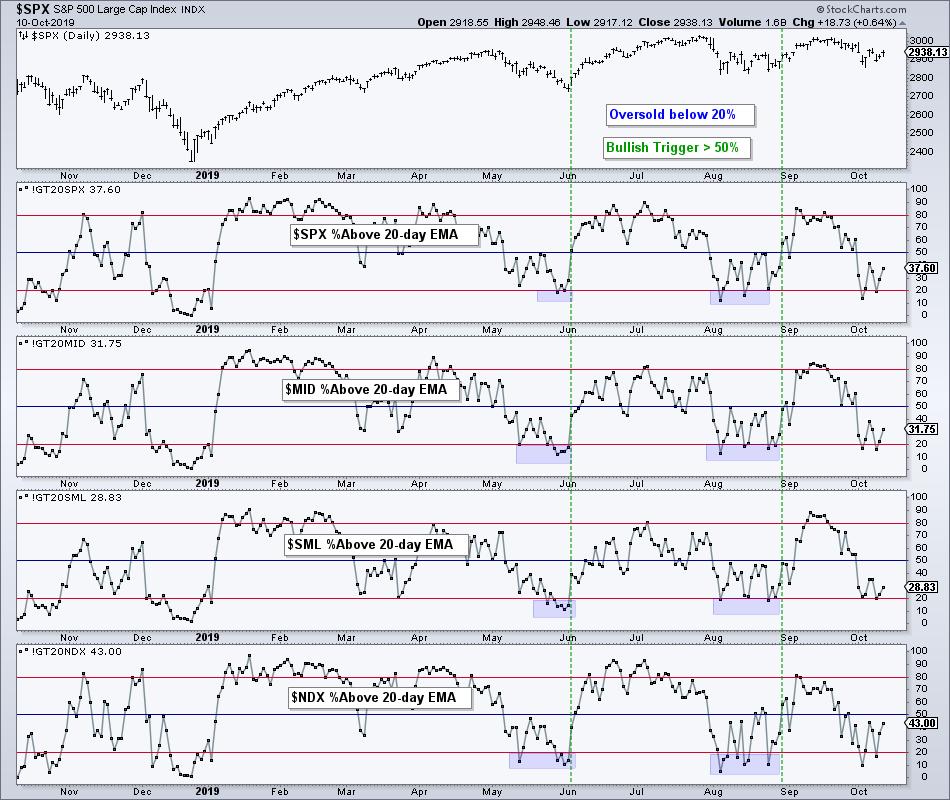 The Sector Breadth Model remains bullish overall, but two bearish signals triggered as the percentage of stocks above the 200-day EMA moved below 40% for Healthcare and Communication Services. XLC was already net bearish so this does not alter the standing too much. Nine of the eleven sectors are net bullish and this is enough to keep the S&P 500 firmly bullish. Even though Healthcare remains net bullish, XLV has gone nowhere for a year and is the second weakest sector for price performance. XLV is down 1.61% since October 2018 and XLE is down 21.47%. 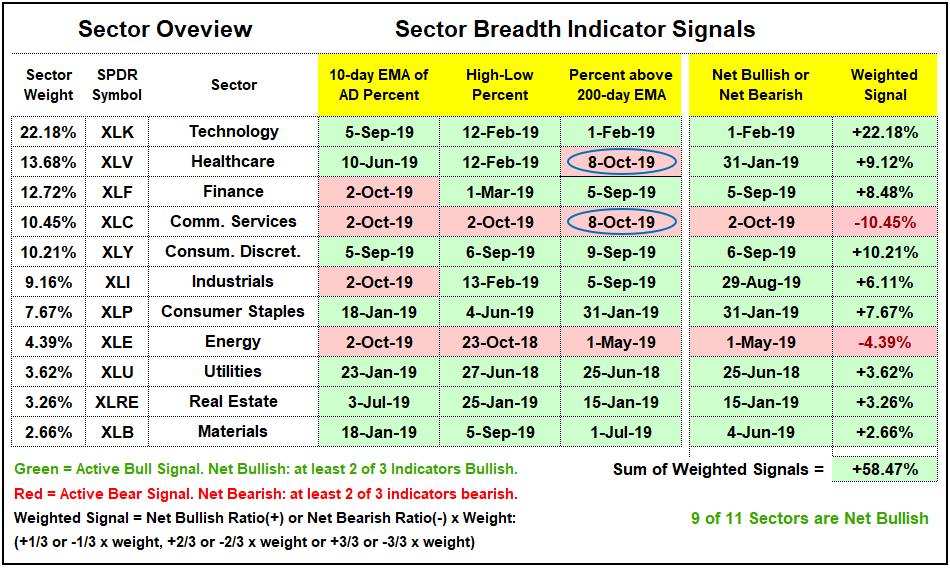 The Fed's balance sheet expanded again this week. The chart below shows total Fed assets in the upper window and the weekly change in the SOMA (System Open Market Account Holdings of Domestic Securities), which accounts for most of the Fed's assets. The balance sheet has expanded three of the last five weeks and we can see the sharp upturn in total Fed assets. The Fed is hitting the gas pedal and it is usually not a good idea to fight the Fed. 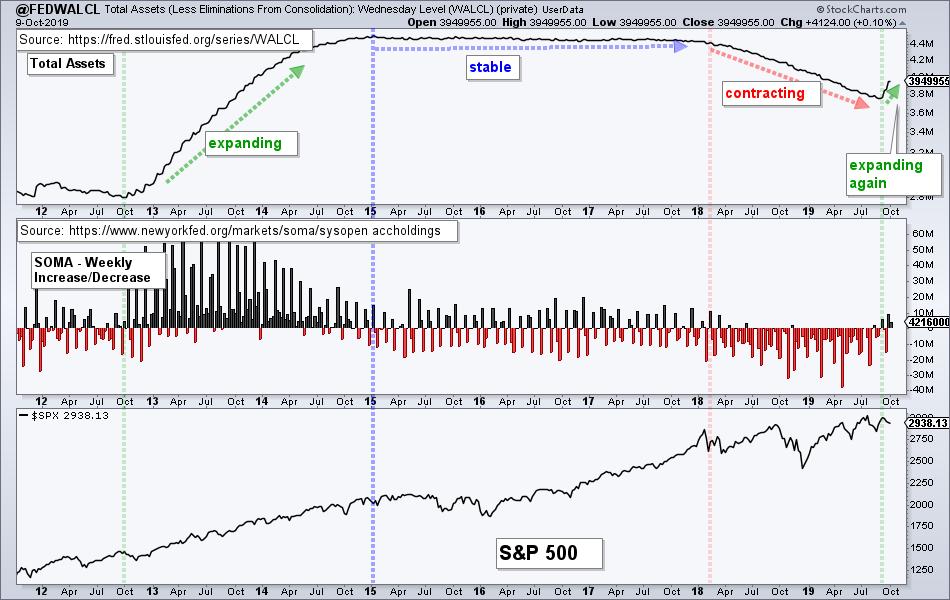 Despite a mixed bag from small-caps and mid-caps, the bulk of the evidence remains bullish for stocks. In other words, we are not in a bear market environment. The lack of new highs in small-caps and mid-caps shows a lack of leadership and strong uptrends in these two groups pretty much the entire year. New highs in the S&P 500 are not exactly inspiring, but we have yet to see an expansion of new lows.

This market has something for everyone. The bears will argue that small-caps are underperforming and this is negative for the entire stock market. The bulls will argue that the S&P 500 and big sectors are holding up and this is bullish for the market. I have good news. We have a choice and do not have to pay attention to the weak parts of the market. As traders and investors, we should just focus on what is strong and what is working.

And the rest? Fuggedaboutit!