The 5G Next Generation ETF (FIVG) is taking the lead within the tech space as it breaks out of a bullish continuation pattern. FIVG is leading because it recorded a new high here in early June. Not very many tech-related ETFs hit new highs here in early June and this makes it relatively easy to separate the leaders from the laggards. The Networking iShares (IGN) also recorded a new high and is leading.

Note that many tech-related ETFs peaked in mid February and have yet to exceed this high. The PerfChart below shows the percentage gain/loss for ten tech-related ETFs since February 12th. FIVG, IGN and the Technology SPDR (XLK) are the only ETFs with a gain over this timeframe. The other seven show losses of varying degrees. SOXX (-.04%) and QQQ (-.25%) are basically flat and holding up better than the other five (IGV, CIBR, FDN, FINX, IPAY).

On the price chart, FIVG surged from early November to mid February and then consolidated with an Ascending Triangle into early June. This is a classic bullish continuation pattern where the upper line represents overhead supply (resistance) and the lower line represents rising demand (higher low). Overall, this is a consolidation within an uptrend and the breakout signals a continuation of that uptrend. There could be some backing and filling, but I would stay bullish as long as 35 holds on a closing basis. 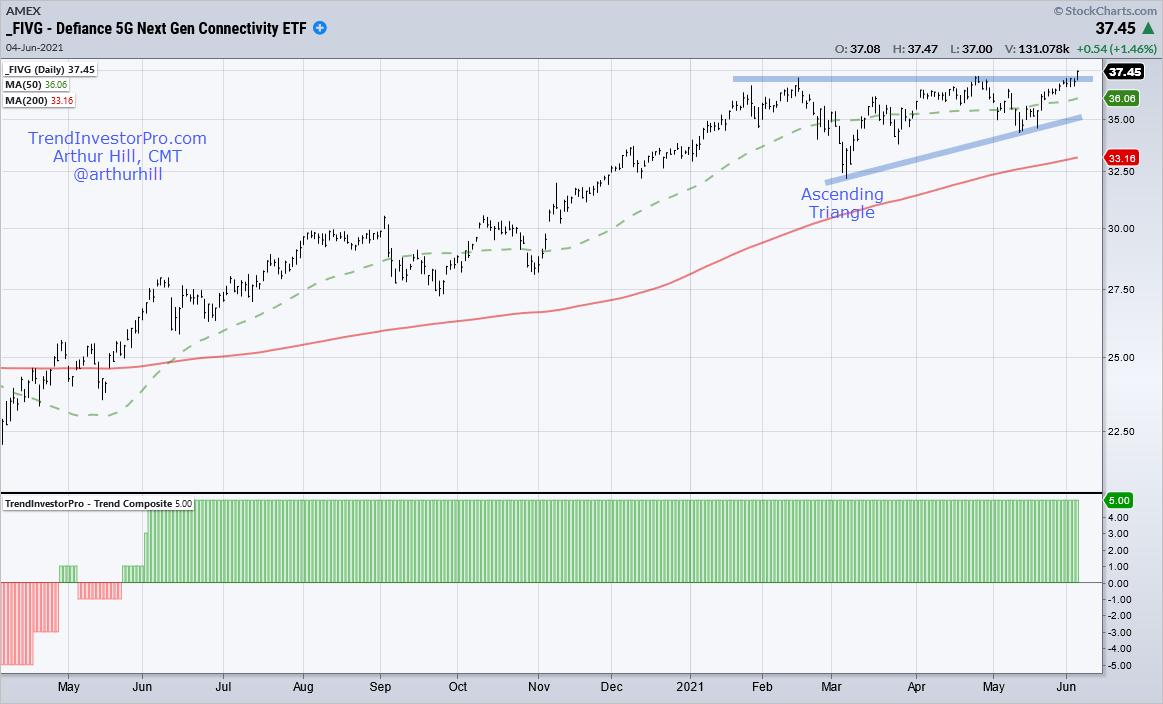 The lower window shows the Trend Composite, which aggregates signals in five trend-following indicators. After a whipsaw in April-May, the indicator turned bullish in late May and remains fully bullish with all five indicators on active bullish signals. I will be covering this indicator and more when I join Erin Swenlin in the DecisionPoint Trading Room today at noon ET on Monday, June 7th. Click here to join.