Well, just back from time in Tuscany, and the markets have a thousand stories. All interesting, all for us to trade. The interesting thing is the opinions are barbell weighted here. Strong bull market, strong Bear market. Lets do some review.

Here is a chart of $COMPQ. Looks ok, or does it? 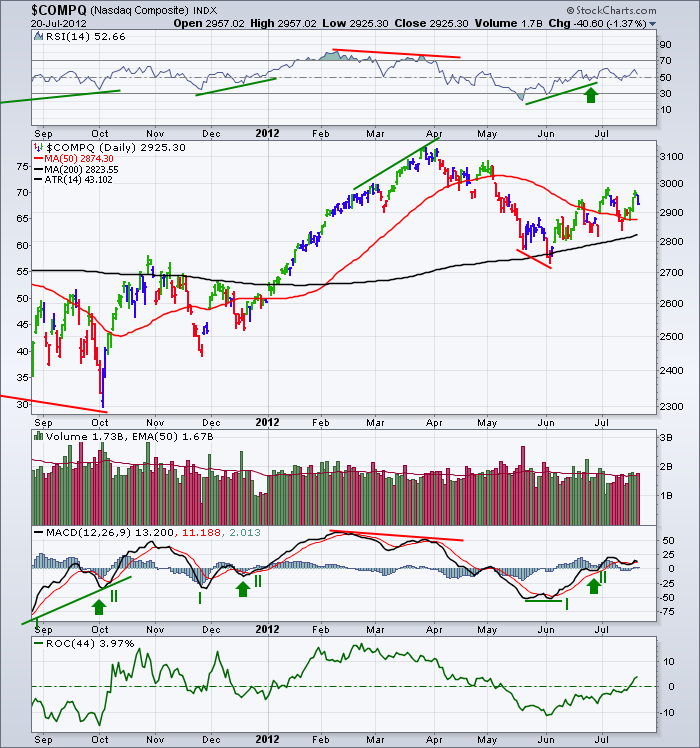 Let's zoom in on the last 4 months. 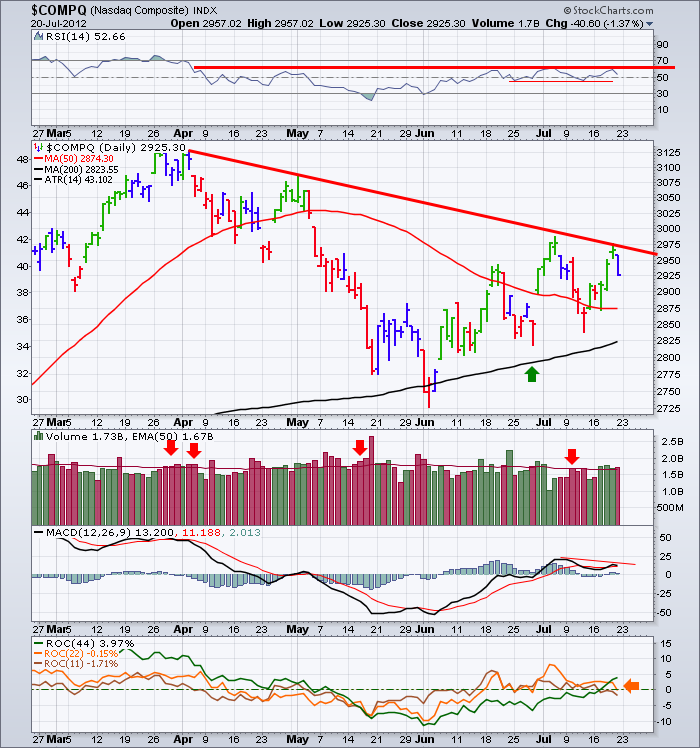 Lets label why on late June early July I started to get optimistic.

1) We were heading in to earnings season.

2) the bears were yelling out loud. The market was due for a bounce at least as all oscillators made bullish turns.

3) last 3 years has had a strong rally into July Earnings.

Well, am I still optimistic?

1) the price action is churning here. Elliot Wave technicians look to find where the impulse moves are. The current price action is just choppy. 100 Compq points in a month is poor.

2) earnings are not providing lift.

3) The libor fraud (truth stretching) will impact banks. Nobody will go to jail, but nobody will be convinced they can fight off the lawsuits either. So less investments in US banks.

4) Commodities have had a bounce, but no real progress other than Oil in reaction to the straight of Hormuz. 3 aircraft carriers and a 4th on its way should mellow this threat rather substantially.

6) The Nasdaq chart above shows churning or distribution. IBD does a nice job of counting distribution days (DD's) to see when the large funds are selling. A distribution day is a down day by at least 0.25% on increased volume. In a bull market, you might get one of these a week. In the transition to a down market, the frequency of these DD's picks up. So you can see the significant number of red volume candles that were higher than the day before in July. This is bad. Look at the end of March with high volumes on down days. This is institutional selling. They can't sell out of their positions very fast. It takes numerous days.

7) Bernanke does his best work when the institutional investors are not on vacation. The market needs the call to action by the Fed and then the institutions to start buying, not selling. Bernanke has a good track record of catching the short traders at the weakest moment.

8) Many charts at resistance lines as price action moves up from the bottom. Like the Canadian Dollar. Crude, Copper failed, The downtrend on COMPQ. The RSI on COMPQ signalling a bear market with a dip below 30.

9) The US Dollar appears poised to keep running.

10) world markets are not rallying either. China, Kospi etc.

13) Europe has not been able to produce a game changing plan.

15) My greg indicator went to sell signal even as the market made a high Thursday. More importantly, some of my longer term trend indicators stayed negative on the recent bounce.

18) when a MACD line dies just above zero, it is a very weak place to expect a turn. Look at the COMPQ above.

So can I  short here? Yes with a stop above the recent high. I don't like being short before Apple speaks though. Bottom line, my early July, late june call said lets let it run till July 20th and see. Well we tried to rally and made some small profits. For me, time to be defensive.