The Toronto Stock Exchange continued to get beaten up and closed down 11% on the year, near the weakest level of down 13%. 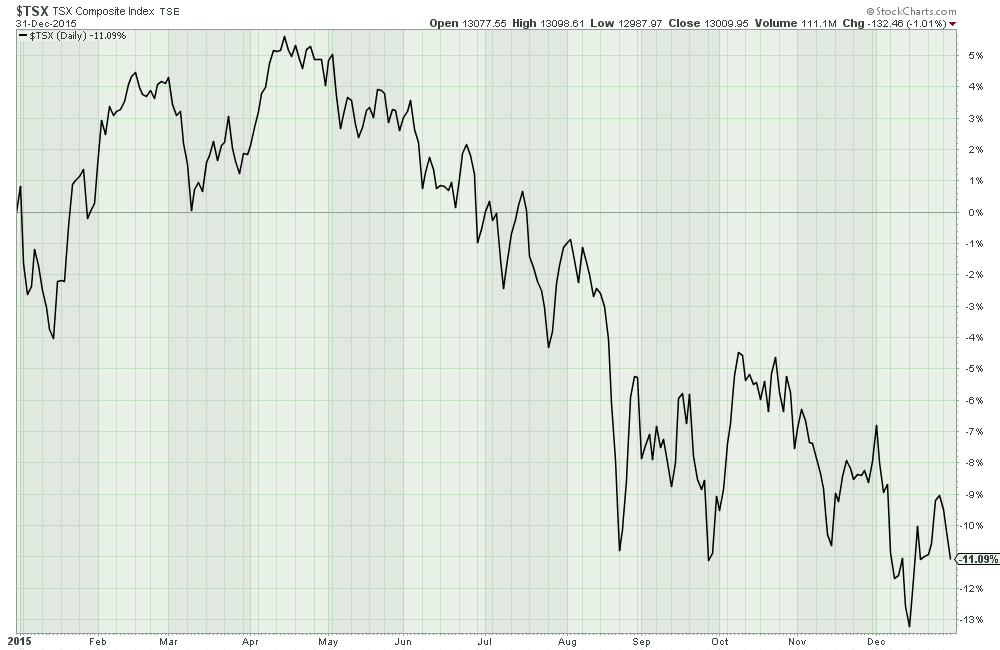 The 13000 level is an important support level for the Canadian market and investors struggled to hold there. It did manage to close the year above 13000 but the chart shows how close it was. 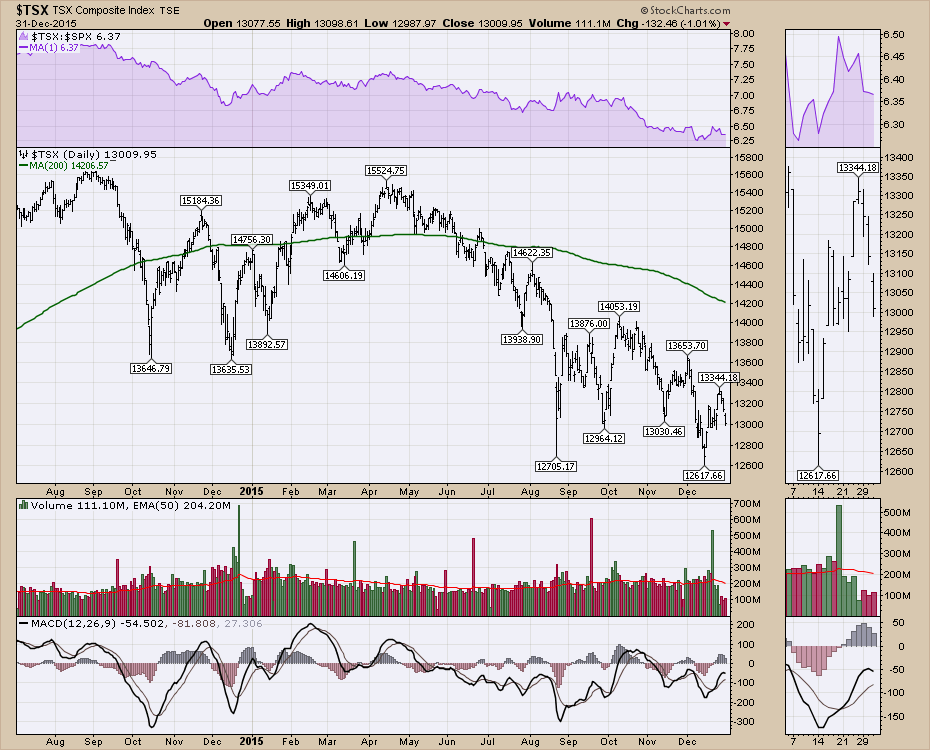 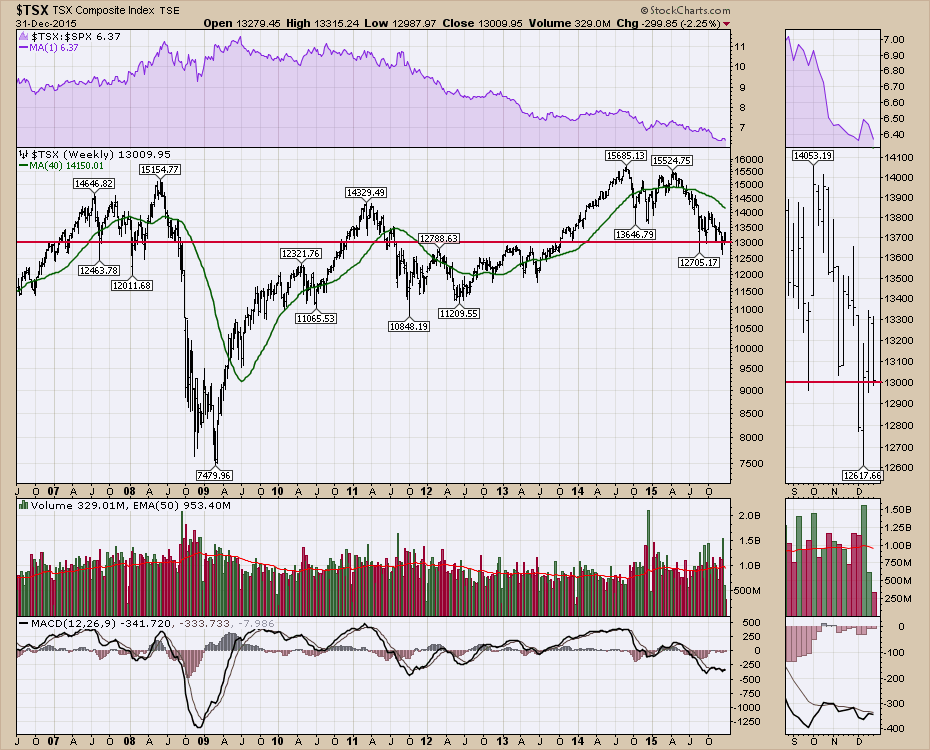 If the Canadian market can not hold this level, investors should be very cautious. A look at how the Canadian dollar behaved after it lost the 2008 level was very telling of the move down. The actual area on the $TSX above should be thought of as a range between 12500 and 13000. If the Canadian market struggles to stay above that level, this would become meaningful resistance in the future. 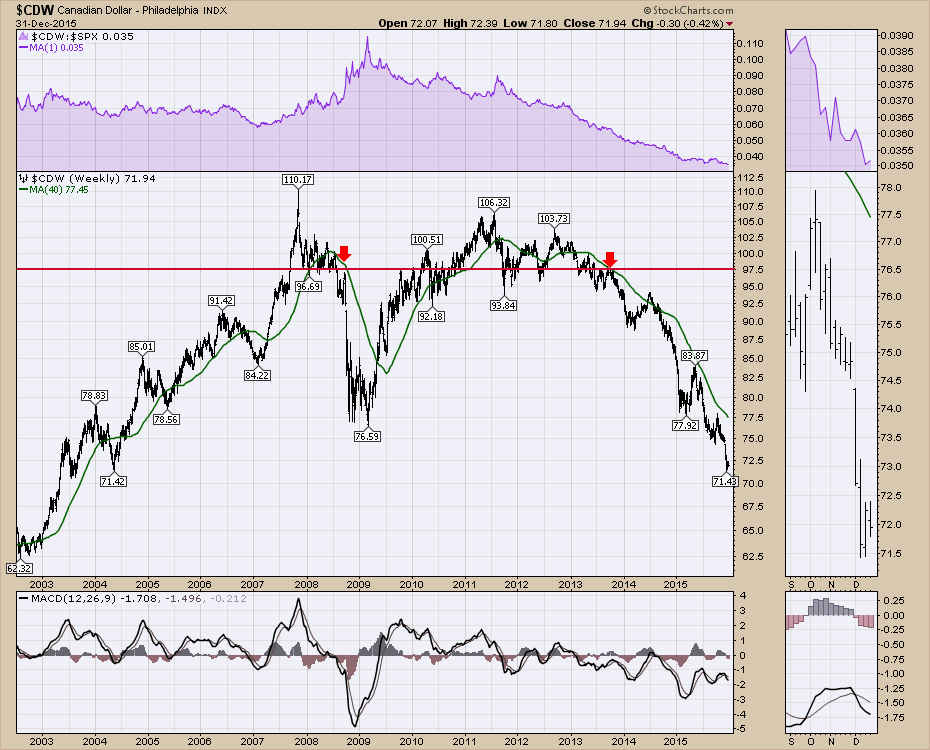 The Canadian Banks outperformed the $TSX, but 4 of the big 5 gained between 10-20% including dividends over a two-year period. Scotiabank (Bank of Nova Scotia) has Latin American exposure as well and Brazil's stock market closed at 6-year lows. The BNS.TO chart is actually breaking down quite hard shown in Aqua Blue. If the $TSX gives way, you could probably expect the banks to make a move lower. 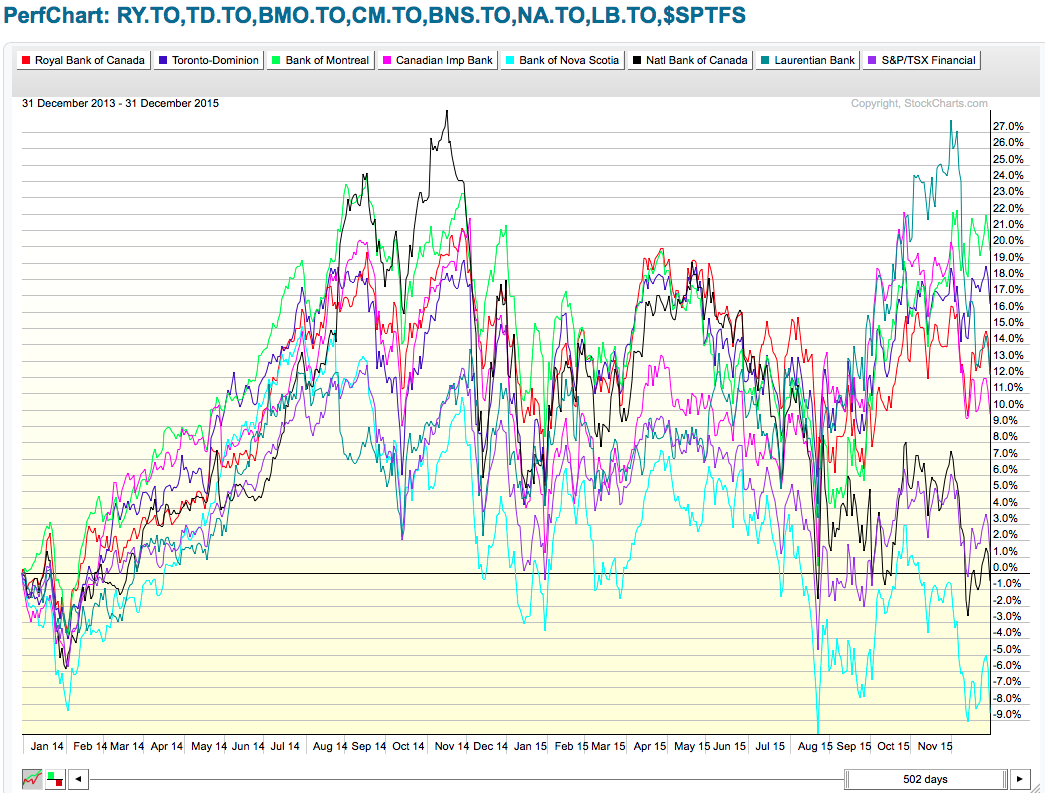 Canadian Transportation stocks showed a slowing economy as all of them were down on the year. 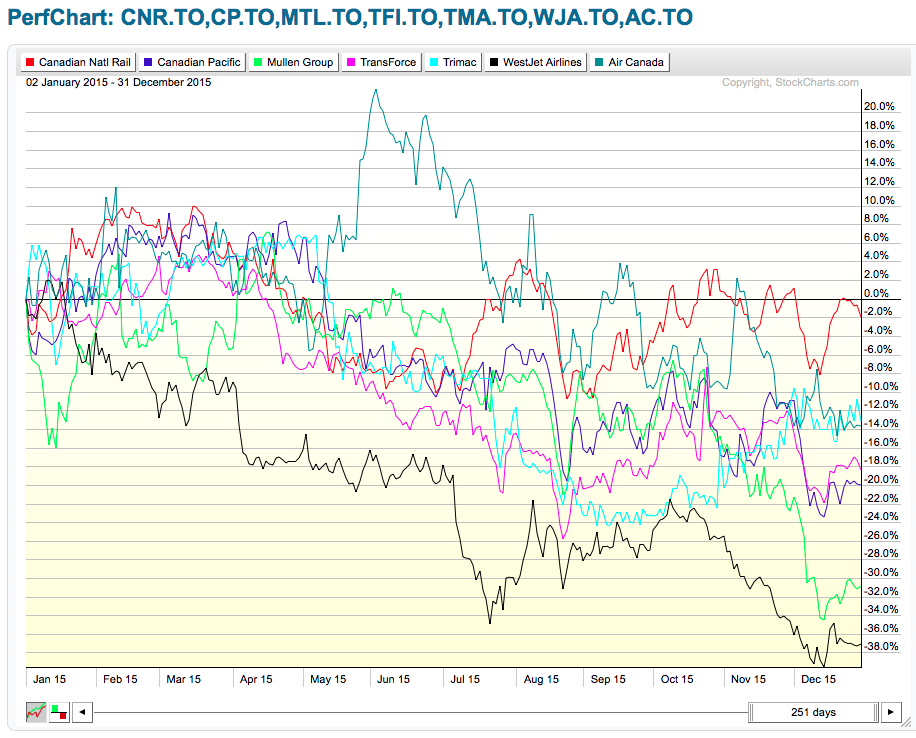 Consumer Discretionary ($SPTCD) has been falling since July 2015. Santa Claus failed to start a rally as the discretionary group had one of the lowest weekly closes of the year. I don't think this is just Alberta weakness. 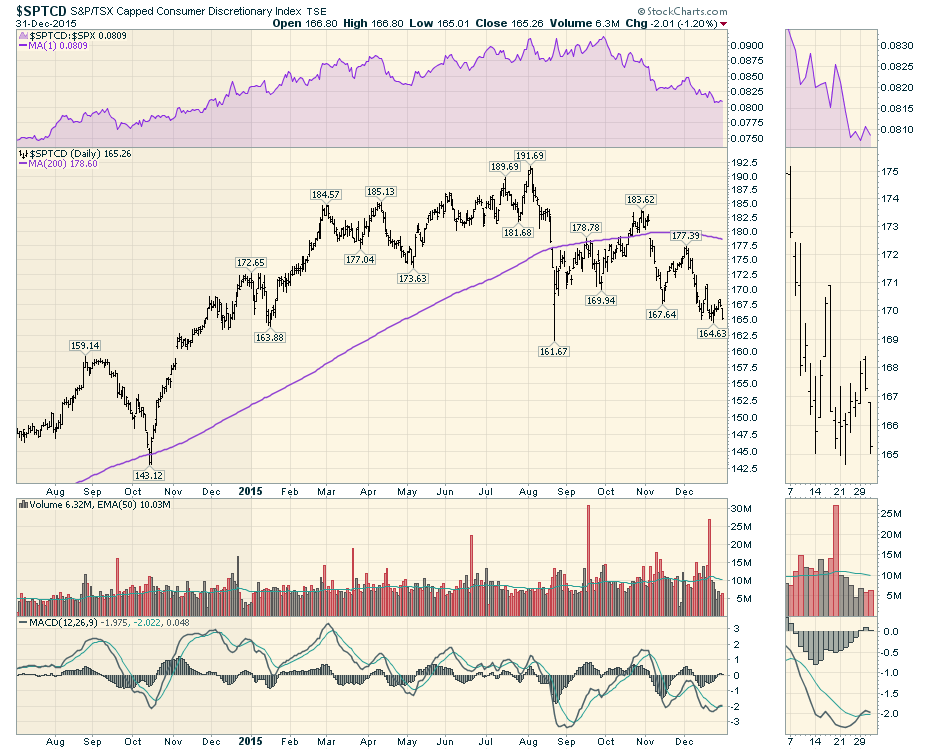 The energy sector got taken out to the woodshed, punched, kicked, quartered, crushed, and shredded, but other than that, all was well. I am not optimistic that the lows are in as the oil and gas bankruptcies start to be reported weekly. 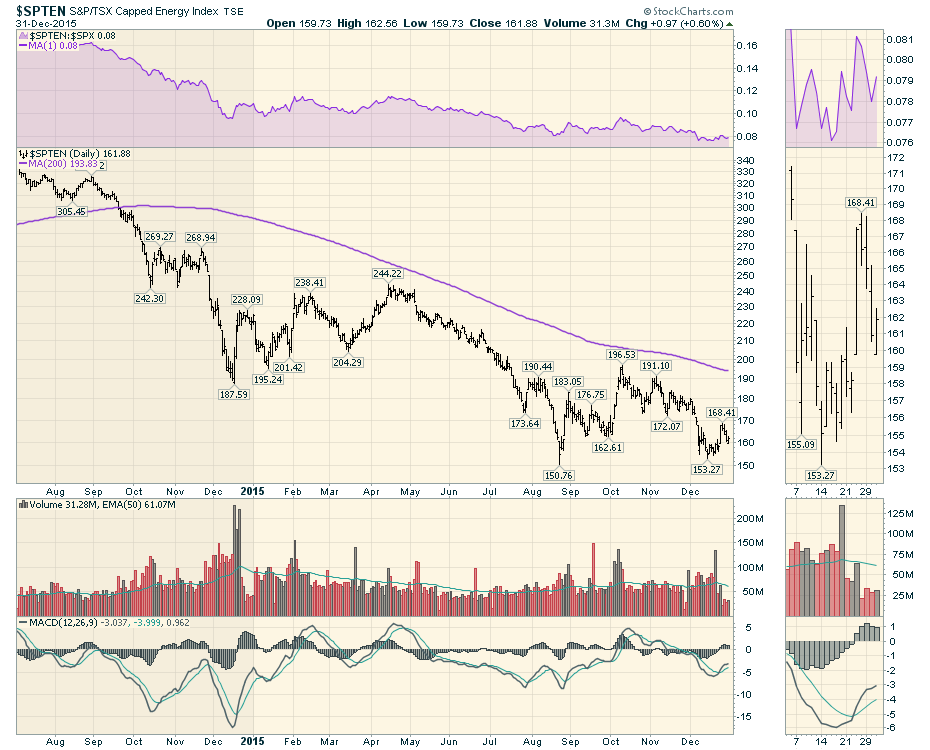 If there is a bright spot in the energy sector, it might be that Natural Gas ($NATGAS) might have put in a tradeable low. 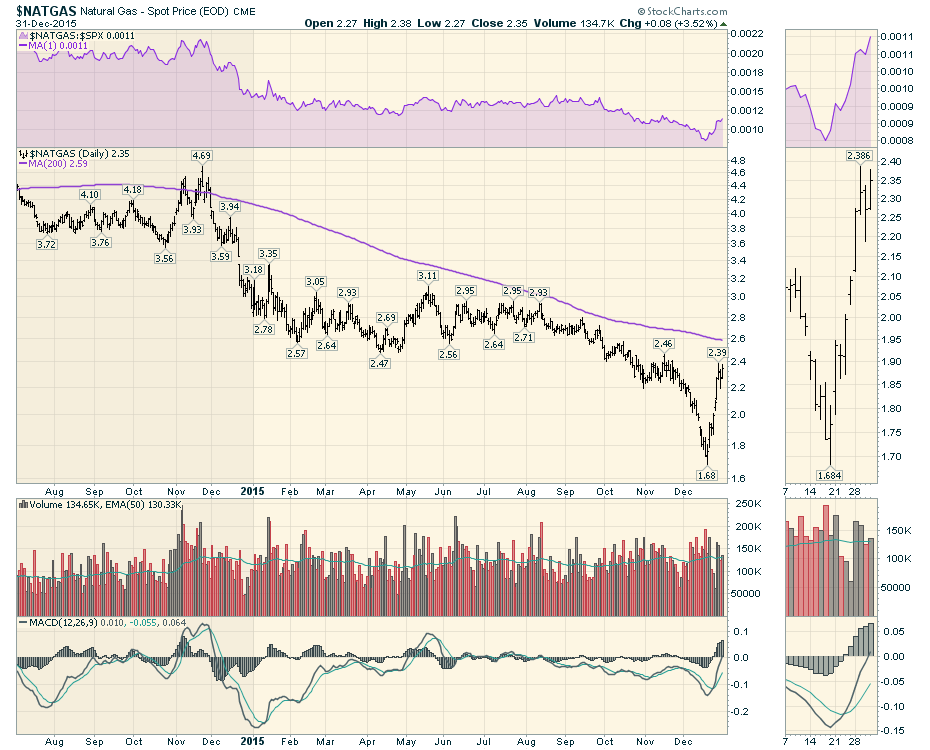 Canada's pride, our diverse supply of industrial metals to precious minerals, failed to rally. The current low was put in 2 weeks ago. Unless the $USD stops soaring higher, this low is going to be violated or at least tested. Just because companies are going bankrupt with low prices, politics and a lack of demand, does not mean it can't go lower. 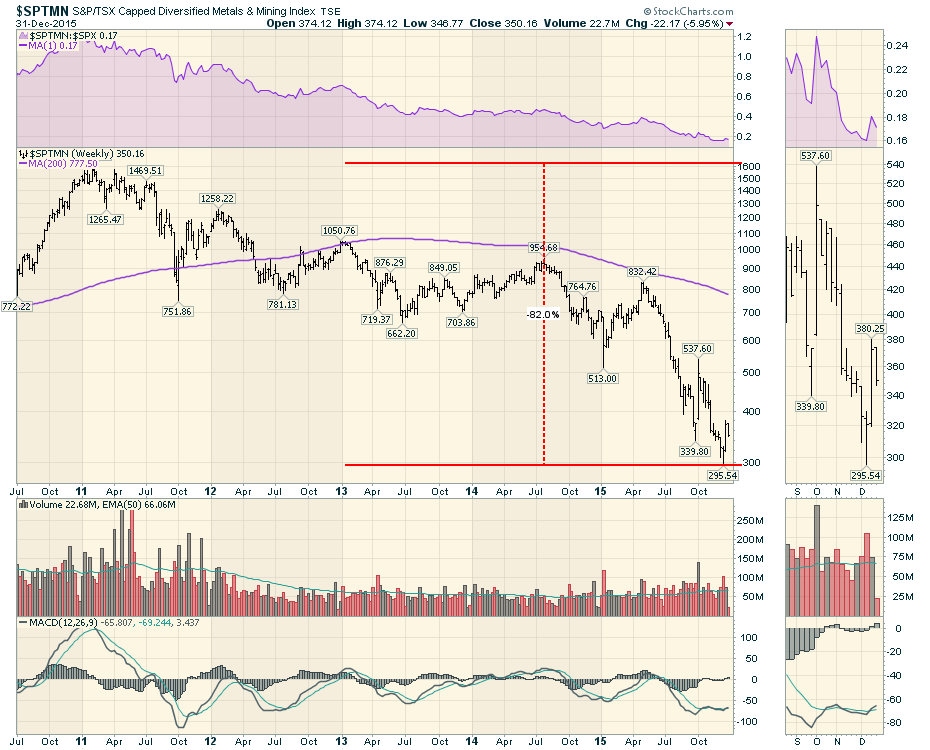 Lastly, the Canadian Industrial complex ($SPTIN). Everyone keeps suggesting the low Canadian dollar is a boon for manufacturing. The problem is you still need demand and that hasn't shown up in Canada or the USA. 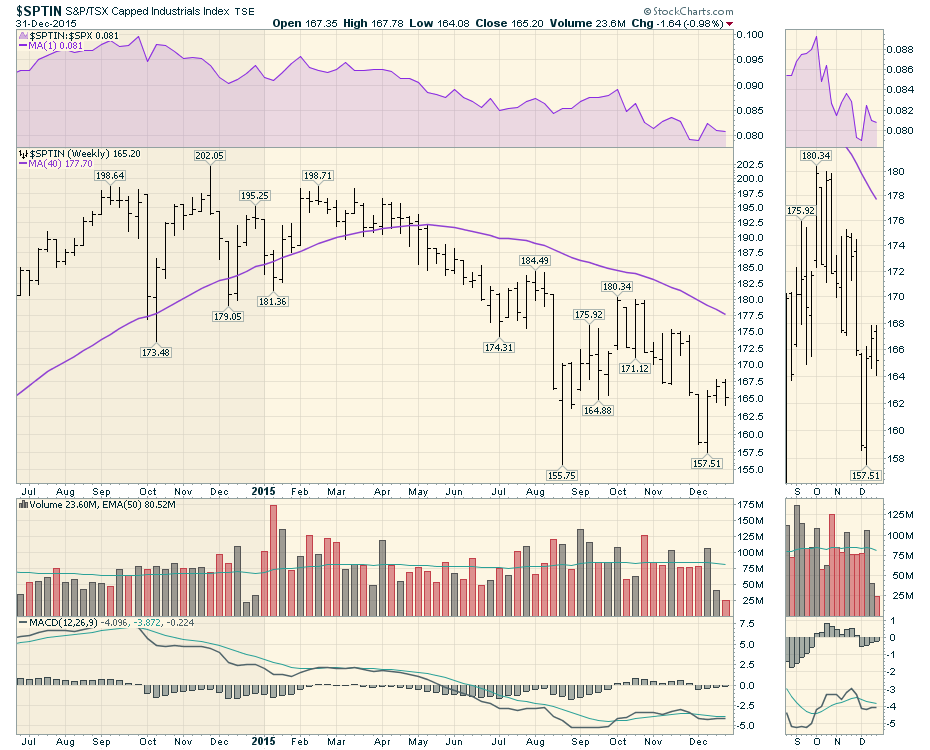 To wrap up, I don't see signs of a turn yet for the Canadian economy. The Australia market has rallied slightly, and I emphasize slightly, so that could end up being a signal that Asia is getting better. Should that be the case, the charts in Canada may start to revert and a bullish swing could help rejuvenate into a positive trend. Until then, the bear market in Canada is firmly frozen on the charts. At this point, a defensive strategy looks like the best medicine in a weak market sitting on a precipice of support.