Much is made of airline on-time departure. This article from the Huffington Post revealed that Air Canada had twice the percentage of late departures as Russia's Aeroflot. Air Canada also dramatically underperforms many other competitors, including Alaska Airlines and Westjet. These three competitor airlines in particular also hub out of northern climates, which prove that it's not the weather that's responsible. Extreme weather only accounts for 5% of the US industry flight delays, but late-arriving aircraft were responsible for 42%. Canada's industry has decided not to keep these statistics, according to the article.

Air Canada made two out of three flights with an on-time departure. It was also alarming to see Air Canada rate worse than Air Transat and perform in the same neighbourhood as Sunwing in the HuffPost article. While Toronto Pearson is Air Canada's main hub, the airport is ranked at 475th overall, one of the world's worst. The on-time performance at the airport was also the worst of the primary airports in Canada. Perhaps that might be the main tenant creating the problem, or possibly the other way around. The dismal on-time performance of Air Canada in the international and domestic airline peer group is clearly disappointing and makes you wonder how an airline can be an industry competitor with that as a backdrop. This would be a difficult backdrop for you to expect great things from the stock.

As an investor, I can't help but be more convinced that something is weird under the wings of Air Canada when I look at the stock chart. When one tries to correlate the earnings, the peer group results, industry metrics or passenger experience to the stock price, it seems as uncorrelated to reality as an Enron chart. Enron famously outperformed their peers right up until they didn't. Analysts kept believing until the month before bankruptcy. This huge divergence from the peer group has my antennae up. There may be nothing wrong, but there could also be a wreck. For me, the price action of the stock is king, not analyst opinion. Something about 500% compared to no gain smells odd. We can learn from past mistakes.

Before the recent buyout bids for two of Canada's air carriers, Air Transat by Air Canada and Westjet by Onex, Air Canada's stock was soaring in the clarity of a lousy 2018. The performance chart below shows Air Canada from July 2017 to April 2019 outperforming everybody, with nobody else coming close. It clearly shows Air Canada as operating an entirely different business than other airlines in North America, suggesting a remarkable airline on the cusp of greatness, a la CN Rail when its on time performance/cost structure was legendary relative to the other railroads. The Air Canada stock has outperformed some of the common US names by ridiculous percentages. If the average US airline is up a few percentage points over a couple of years, why is one of Canada's airlines almost 40x that couple of percentage points but not the other? Without any research, it would be normal to assume they were doing something wonderful to change the airline experience. 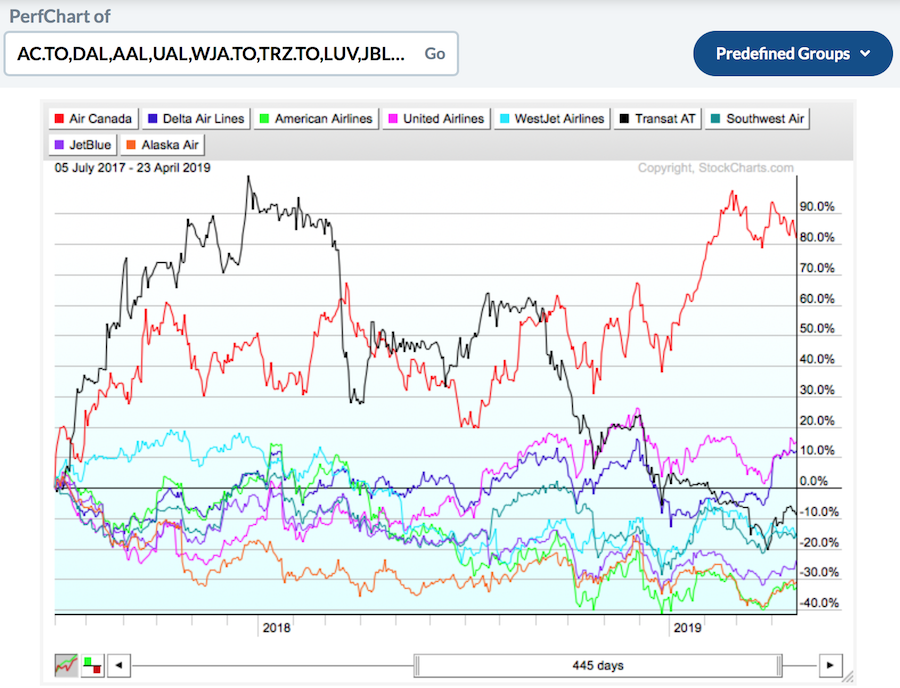 In JD Powers rankings, Air Canada is not considered any sort of award winner; in fact, it is grouped in the lowest category they have by almost every measure. Air Canada touts itself as an award-winning company for passenger experiences through a media organization (Apex) that Air Canada sits on the board of as a Vice President. I'll leave that to others as to which award provider has credibility.

The whole Aeroplan points fiasco involving Air Canada was equally opaque. First there was the divorce from Aimia, then there was the buyout of Aeroplan from Aimia. The government, without much review, decided there was nothing suspect about the transaction. Aimia's net proceeds for the Aeroplan portion of the company was $500M. All of this currently affects the reported financials, making comparisons difficult even though some information has been provided.

While Air Canada revenues may be hitting new highs, the customer experience is not. Air Canada continues to implement more low-privilege seats (Rouge), many times at the same cost or higher for travelers through the same booking site (aircanada.com) as the premium Air Canada airline. If you are not an experienced traveller knowing what to look for with a firm understanding of the quality differences, the site is uncomfortably difficult. Last class and business class are very different experiences on each airline but that is not clear when booking. Only the reality of travel on Rouge brings clarity. That may help investors squeeze extra margin, so perhaps that supports the institutional investor.

How about investing in the airlines in general? The top panel in the chart below shows the airline industry over the last five years; you can see that the industry has been flat going back to early 2015. Air Canada, in the lower panel, is up nearly 500% within 3.5 years. 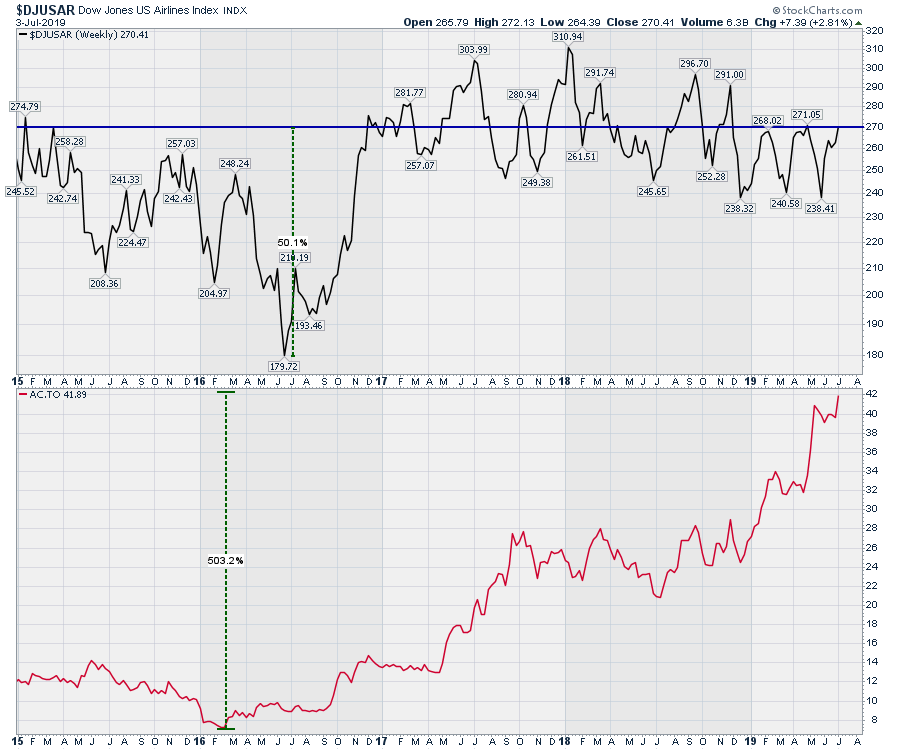 Below is the chart of Air Canada, which is hitting new highs today as it appears the company will succeed in its buyout/removal of a competitor (Air Transat). The vertical ramp of the stock in May happened on this acquisition news while the rest of the industry was dropping. This recent move over the last two months was not on the performance chart shown above ending in April 2019. Is this the institutional investor enjoying the thinning out of competition? Based on the position that Canadian consumers will have less travel options, Air Canada may be in the catbird seat for vacations. 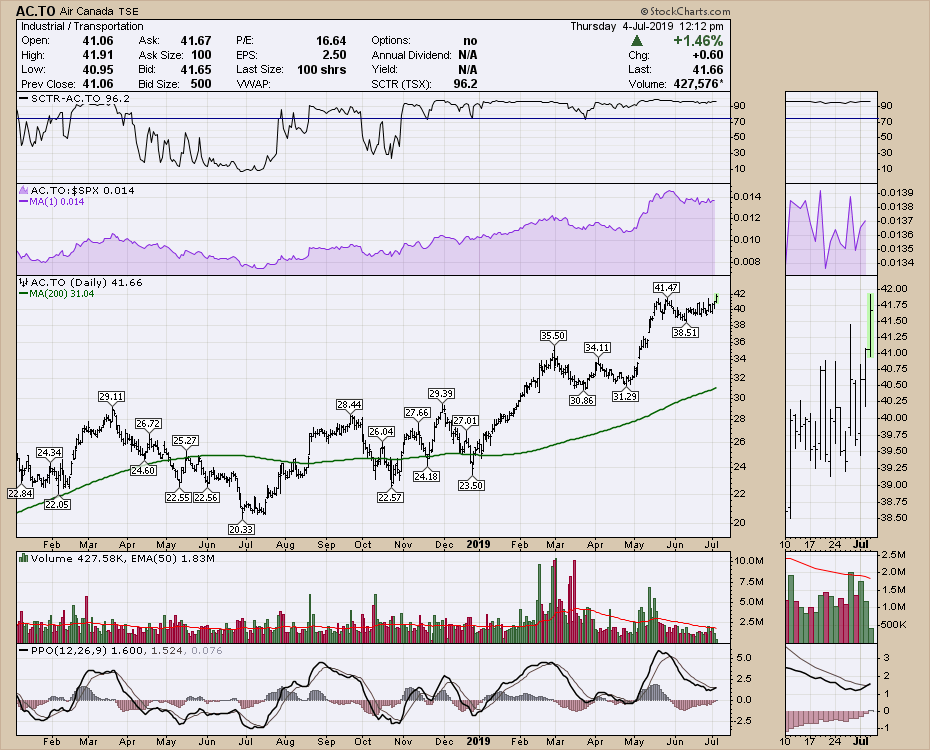 One source of good news for the airlines is the recent passenger bill of rights. Recently, the Canadian Government put out a new passenger bill of rights for airline travel that was mocked by consumer groups for helping the airlines deliver less-than-stellar travel experiences. There is a debate over how much dominance the Canadian carriers have had on the "airline - bill of rights" and the government's oversight of the industry. This new cliff drop in standards may also aid in the value in Air Canada's stock price; however, it had not helped Westjet, so it is not clear if that has an effect on valuation.

The bottom line is that the Air Canada stock is not behaving like most other publicly traded airline stocks. To recap, the customer experience ranks near the worst in Canada based on the article and amongst the worst in the JD Power surveys. The main Air Canada hub is one of the worst airports in the world for passengers. On-time performance is abysmal. The earnings were remarkably weak year-on-year. The growth rate is 7% for available seat miles in an old airline, which is bullish. The adjusted net income was almost 1/2 of 2017. The unrestricted liquidity is up 20% while the free cash is falling. This unrestricted liquidity popped another 20% in Q1. The financial engineering of Air Canada seems to be the focus of the current leaders and investors, not operational performance. While I am not a balance sheet analyst, the institutional investors still like the stock. It doesn't add up to me, and it doesn't have to.

Wondering when the outperformance of a stock seems to have no fundamental basis is not a requirement as an investor. Most fast-moving stocks are well outside normal parameters of P/E or price-to-book ratios. Usually, you will see an industry group move up on the prospects for things improving. As an example, in the US software space, a significant number of stocks going up together suggests an industry-wide move. While they trade at lofty valuations, the growth rates are stellar. That compares to this article about an airline with single-digit growth rates and plummeting profits. While the first quarter was up, the three-year chart trend says the recent move is a continuation of a wonderful investment. However, the airline industry is not seeing the same backdrop. Perhaps this price trend continues if the acquisition benefits of Air Transat and the suction of Aeroplan back into the mothership help improve the rate of change in cash flow.

As long as the Air Canada stock performs, it will be fine to own it. Without management commentary, the financial results seem very alone in the industry. Westjet is in the top half of industry performance and the stock was in the bottom right before the buyout. Air Canada is the exact opposite. It is clear that Air Canada does not have a correlation to the most common passenger performance metrics that I can see.

In this case, it seems remarkable to believe plummeting earnings on single digit growth in revenue is attractive. The first quarter numbers as presented were strong, but the chart does not show any downside with last year's drop in results. It would be different if it was a profitable industry. As a chartist, it is important to be aware of the oddity of the current price action relative to peers, which was the reason I went to review the information a little deeper. Do other institutions have a unique Air Canada benefit worth holding that makes sense, or is it all based on financial engineering that flops on the tarmac? I remain concerned that one airline can soar without the other majors following in some way. Competition doesn't usually take three years to get on the same plane headed the same direction if it's possible to do so.

If I owned a position in the stock, the first clue for me to head to an exit would be when the stock price starts to underperform in relative strength. As long as big investors believe the stock is going higher and outperforming, it is bullish. I wouldn't wait for management to tell me things are slowing, but when the chart starts to underperform peers or the $SPX, I would be quick to move to a sell button. After 500%, can it really be a long way off? When any of the trend lines/arrows marked on this chart start to get bypassed, I would use those to help time an exit. Again, the stock is missing most of the airline metrics, so why wait for trouble to show up in earnings? 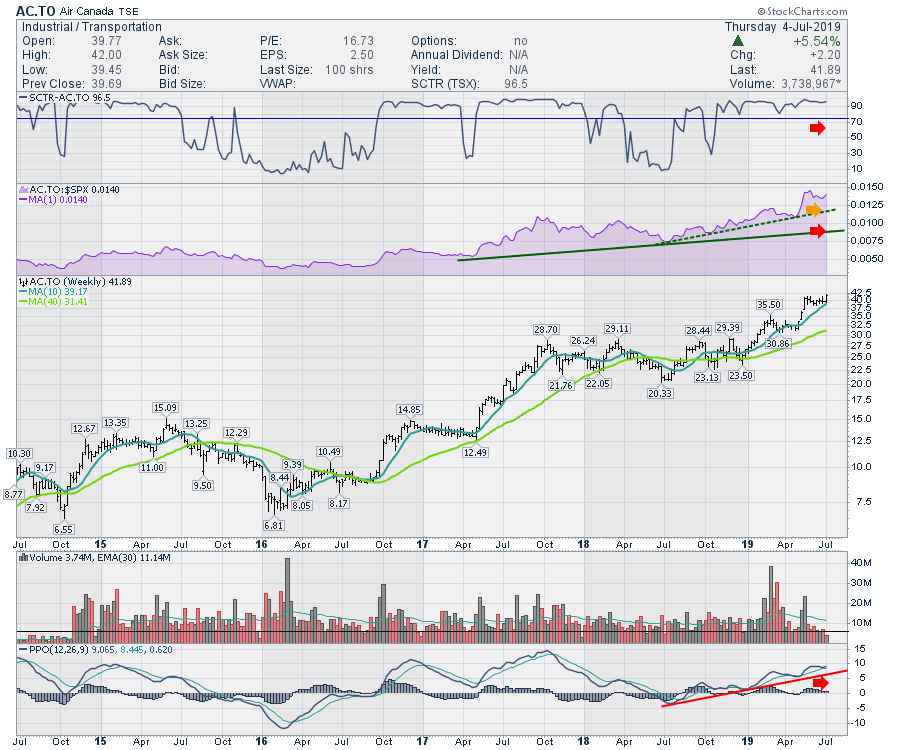 I am a technical chartist, not a financial analyst. I analyze investor behavior towards a stock, not what management thinks of the stock. In this case, the stock chart is in la-la land relative to the rest of the group and presented a unique situation for analysis.

I have no short or long position in the company at the time of writing and no intention to short the stock in the near future.