This week, the markets followed through on some big moves that started during the last week of August. Across the globe, almost every major market was kicking higher. The Canadian market had a little underperformance due to the strong declines in precious metal stocks. Meanwhile, some of the most encouraging news in terms of chart patterns came from the Asian exchanges. 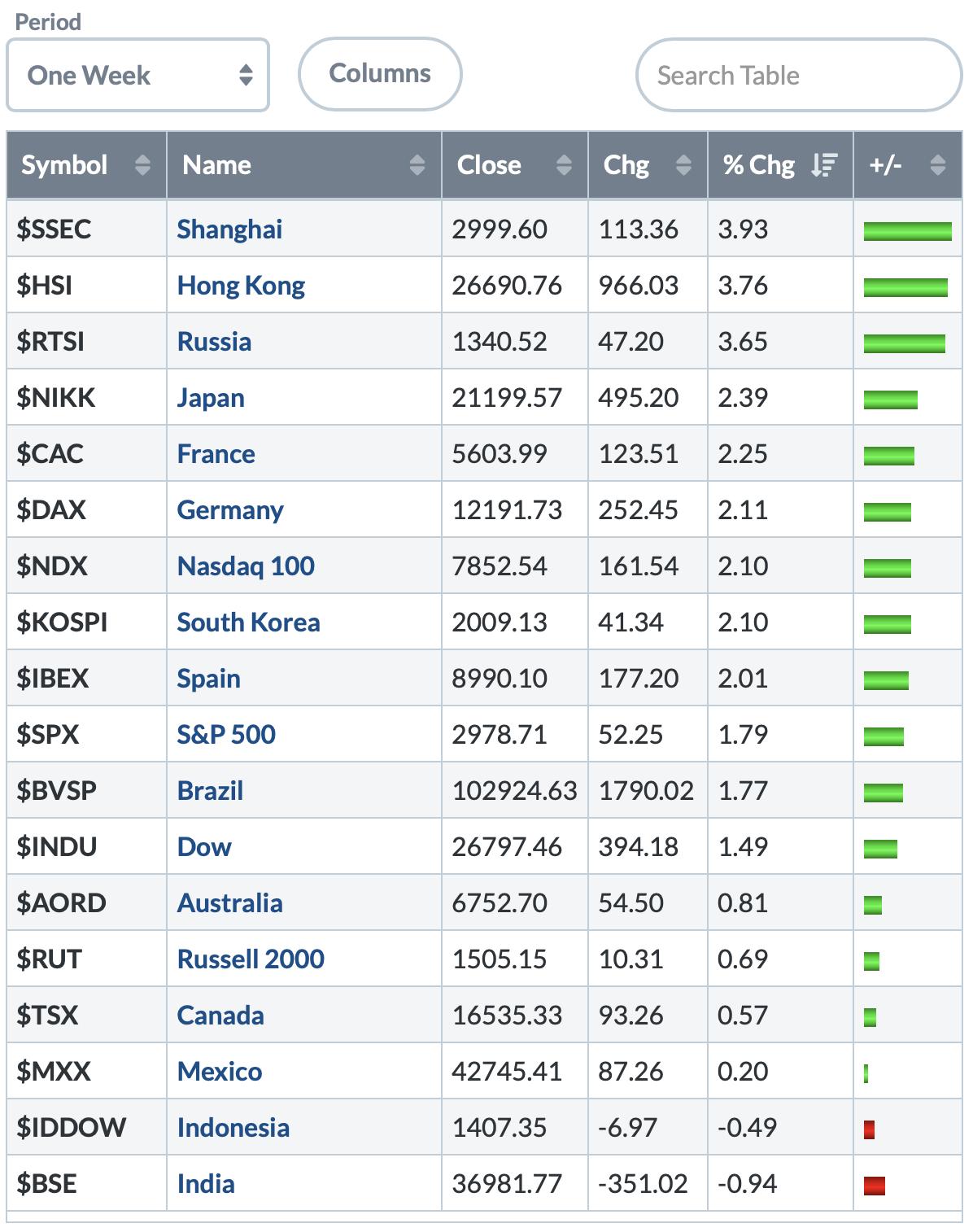 The Shanghai Composite ($SSEC) is setting up nicely on the weekly chart. One of the problems we have seen since the tariff talks started back in early 2018 is that the entire globe has seen growth slow. After the early 2019 surge, the last few months from April to August have seen a pullback. Now, it looks like the upside momentum is really kicking in. I like the chart making a turn higher on the PPO very close to zero, which looks like it is setting up for a major run higher. The surge above the 10-week moving average also looks very strong. Notice the Full Stochastic moving above 50, which is usually a very bullish indication. 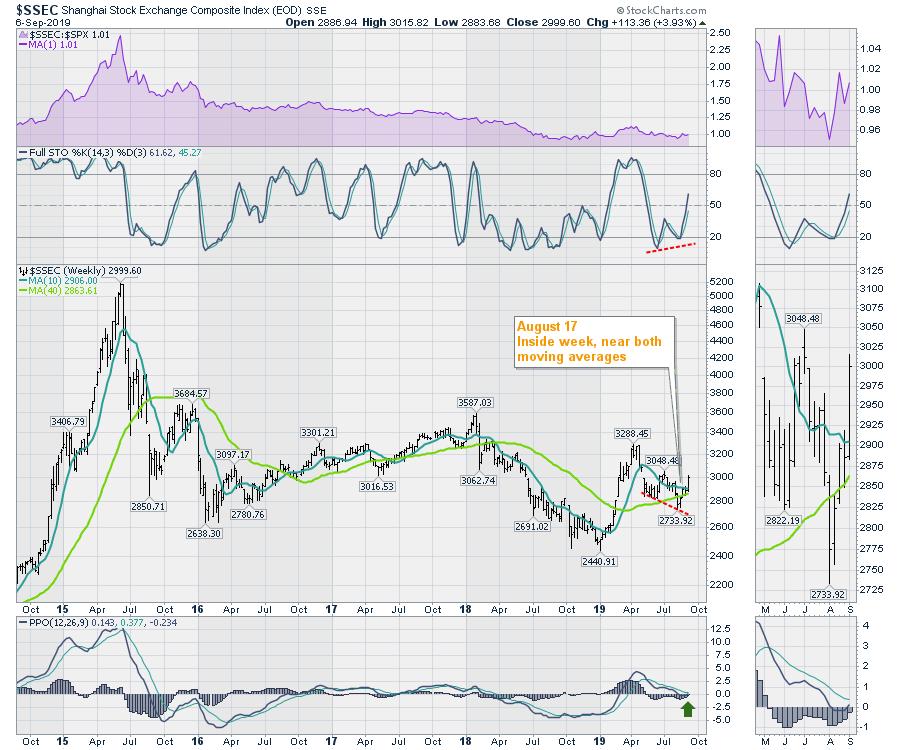 Commodities also had a particularly strong week. While the gold and silver miners reversed this week after months of outperformance, different industrial metals surged, including copper, steel and rare earth metals. The movement in oil was also nice to see. 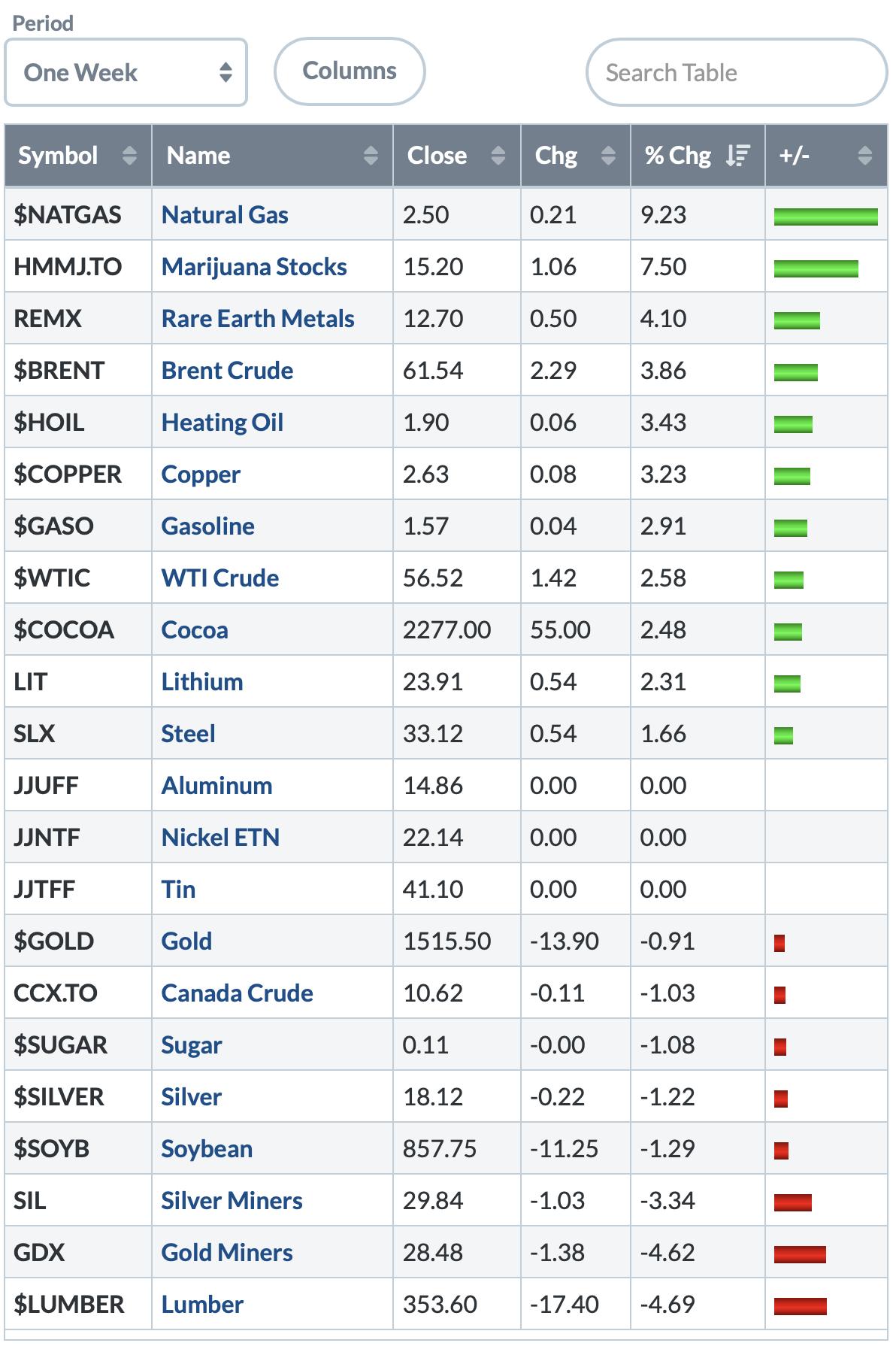 The West Texas oil chart ($WTIC) moved back above the 10-week and 40-week moving averages. With the full stochastic turning up again, it looks more like crude oil is set to break to the upside. On the PPO, the momentum indicator has been idling lower rather than surging lower, which suggests to me that selling pressure is easing. The chart moved up $1.42 this week and locked in a higher low. Just to put the gain into context, the $SPX was up 1.8% this week while the percentage gain for oil was 45% more at 2.6%. That strong bid on energy and industrial metals, coupled with a global surge, suggests the potential for a 4th quarter run in both commodities and equities. Notice how the momentum downtrend on the PPO started when the tariff talk started. A move back above zero on the PPO would suggest a break in the down trend and a new cyclical swing higher. 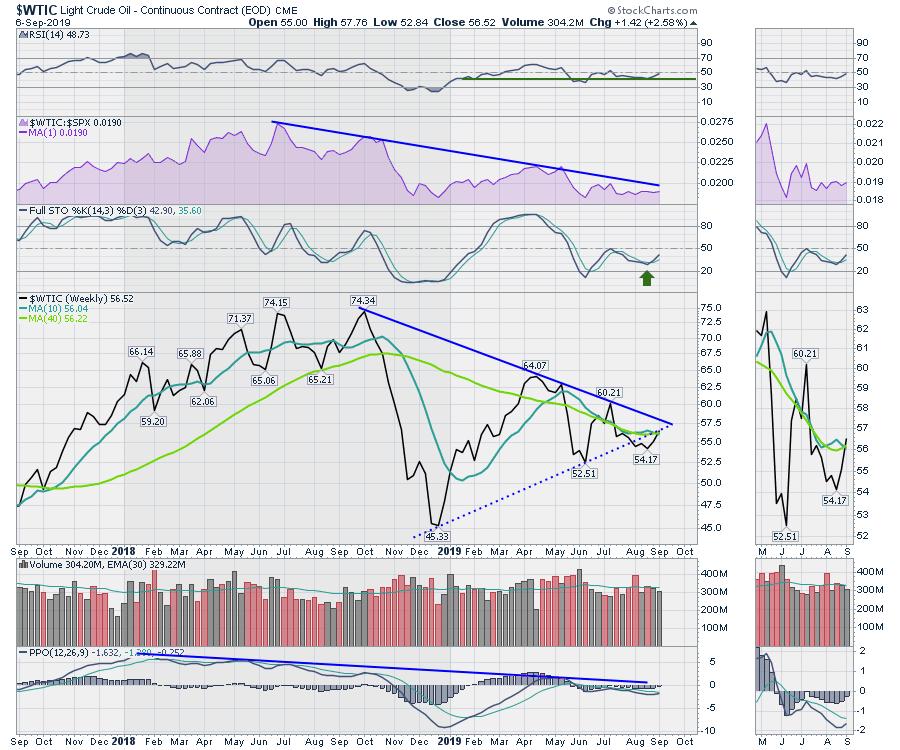 This week, the video focused primarily on the commodities, as they look set to continue higher. While commodities have been held down recently as the equity market rallied in July, the stage looks set for some commodity outperformance. 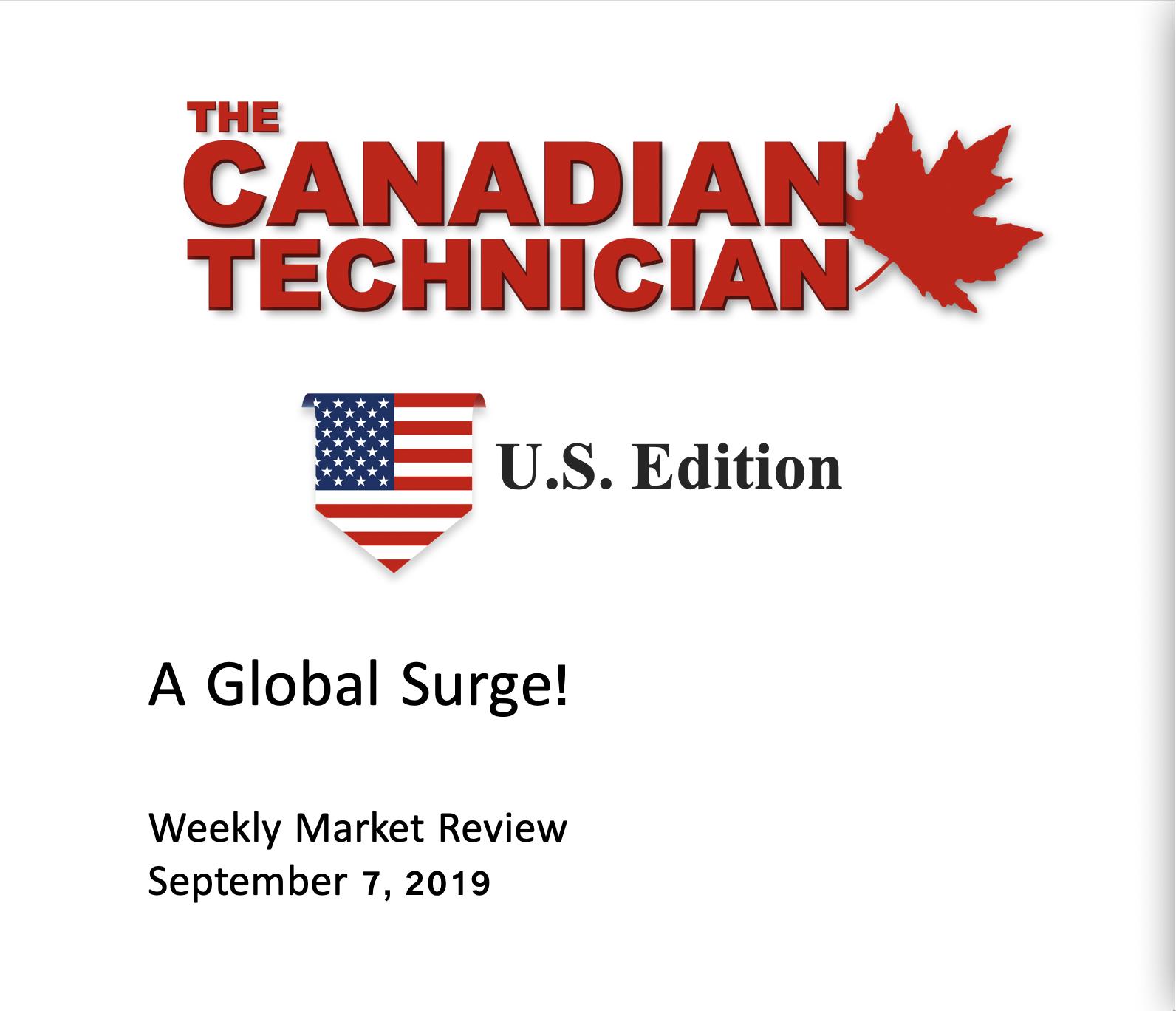 I do want to point out some of the places I'll be speaking over the next few weeks. Firstly, I'll be presenting at the TSAASF.org conference on Saturday, September 14. Head over to TSAASF.ORG for more information.

On Tuesday September 17th, 2019 I'll be at the Minneapolis CMT Association meeting as part of a panel discussion about the current state of the markets. Ralph Acampora, Jay Woods, Craig Johnson, Katie Stockton and I will be rolling through some ideas for the 4th quarter of 2019 and 2020.

On September 21, 2019, I'll be presenting at the Toronto MoneyShow.

We are also getting set up for the Canadian Society of Technical Analysts' annual Technicians Day on October 19th, 2019. Book that date in your calendar; it's an all-day event that you can attend online for just $35 or in person for $75. I'll have more information in the coming days.

Just as a last reminder, Tom Bowley has a presentation Monday, September 9th at 4:30 PM ET.

Following up on last week, my indicators are turning positive and my charts are turning higher. Europe and Asia are making strong moves and we are working toward new 52-week highs on some country indexes in September. New 52-week highs are bullish and do not usually occur in a bear market! I will say I was correct that the market would break lower in August, but the fact that there is fresh optimism on the charts means we should change with the tide.

It's harvest season, make hay while we can! 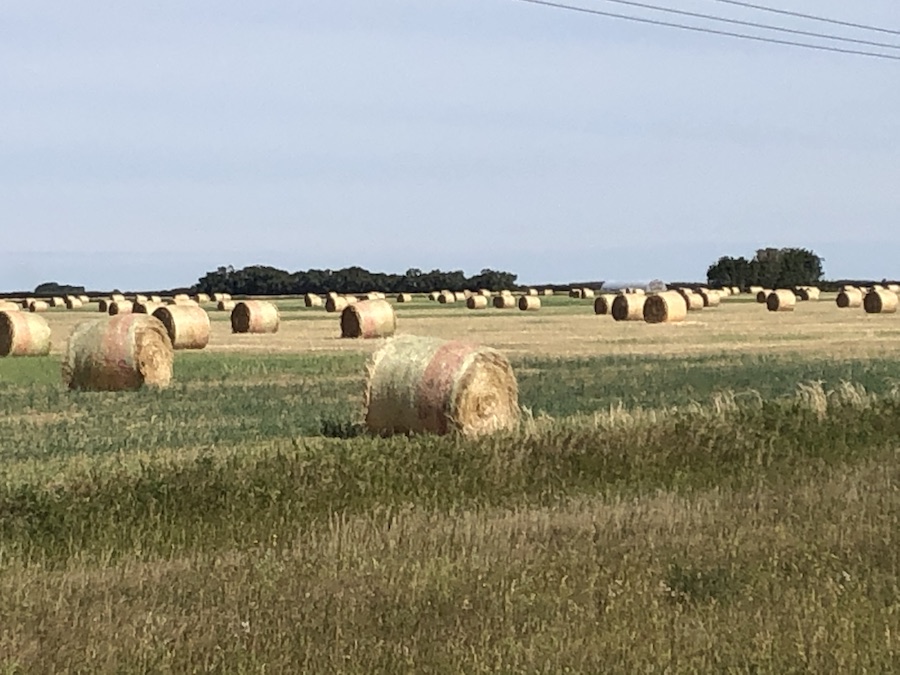