Our main concern here is the relationship between the world's strongest currencies and the Japanese yen. Since 2000, the world's strongest currency has been the Euro (followed by the Swiss Franc, Canadian and Aussie Dollars, and the British Pound. The yen has been the weakest global currency). Chart 1 measures the yen against the Euro (XJY:XEU ratio). The yen has been falling against the Euro (and all other currencies) since 2000. The Yen:Euro ratio, however, has reached a major support level at its 1998 lows and is in oversold territory as measured by the monthly stochastic lines. Purely on technical grounds, this would be a logical time to start reversing the "yen carry trade" that's existed for seven years. In other words, it may be time for the yen to start rising against the world's major currencies (including the Dollar). Chart 2 shows that the yen is bouncing off a nine-year support line (versus the U.S. Dollar). The monthly stochastic lines are turning up from oversold territory. The yen may be done with "carrying" the rest of the world's markets. That's why everyone is very nervous about the bouncing yen. 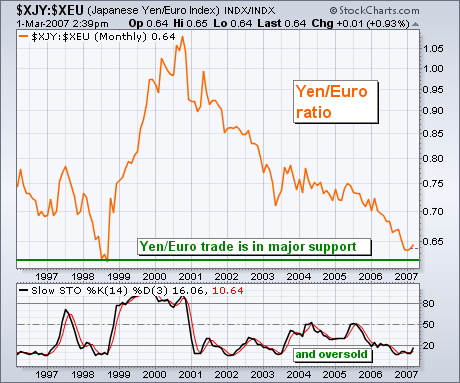 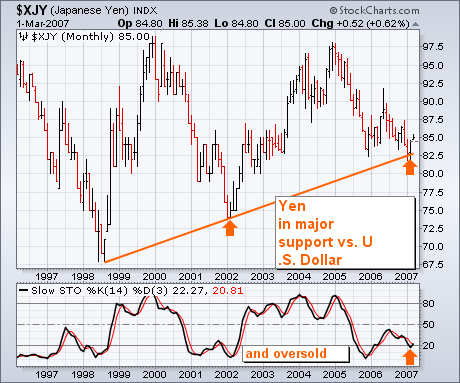