We've been watching and following the semiconductors for the past many months, awaiting their attempt to join the stock market's rally. But it hadn't happened....until this past week. We have remained steadfastly bullish over the past couple years and became very bullish when we saw long-term positive divergences form on the MACD on the major indices last July. Lower lows were in place, but the MACD actually put in a higher reading on those lower lows. We could see that selling momentum was dying. In articles over the past several months, we've indicated that we believe the market could be ripe for an advance - the likes we haven't seen seen since 1999 and early 2000. However, we also indicated that we expected the Semiconductors to participate. We felt we needed to see participation from the semiconductors in order for the NASDAQ to lead the major indices higher. Let's take a look at two charts. First, let's look at the Semiconductor Index (SOX). We've seen repeated struggles at 492 until finally we got the breakout we were looking for. Not only did we see the breakout, but we've since retested that breakout area and by the end of last week were looking to breakout again. This is bullish action by the group and we're not looking for any significant resistance until the 530-540 area. If the semiconductors can take out that symmetrical triangle downtrend line shown below, there is solid potential for a very significant rally in this group. 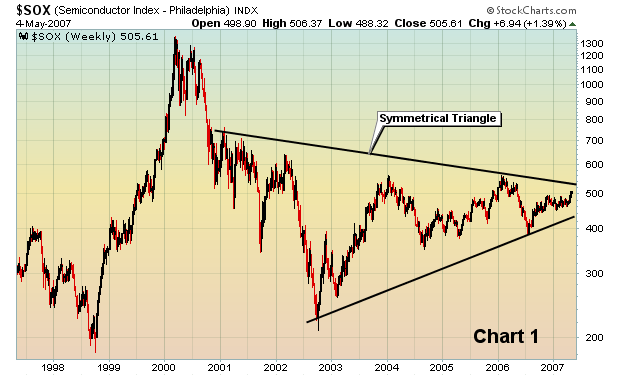