Even though the Dow is trading at all time highs and the S&P 500 is trading above 1500 for the first time since 2000, the Russell 2000 continues having trouble with resistance around 830. Thinking in terms of Dow Theory, I view this as a non-confirmation. A bull signal is triggered or renewed when both the Dow Industrials AND the Dow Transports move to new highs. Failure by one of these averages results in a non-confirmation and this questions underlying strength. 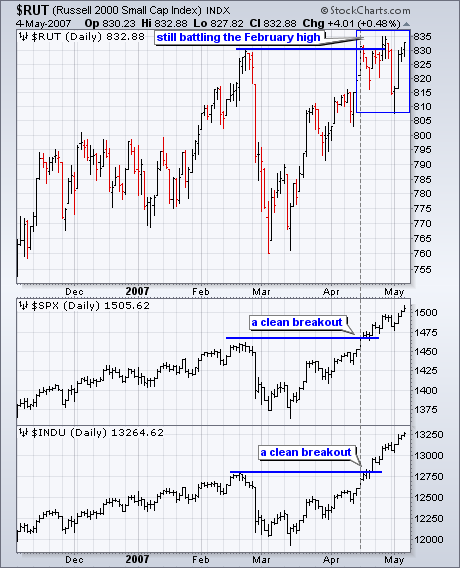 The Dow and the S&P 500 cleared resistance with relative ease, but the Russell 2000 has been consolidating around 830 the last three weeks. Technically, the Russell 2000 closed above its February high in late April and again in early May. Realistically, the index has yet to forge a convincing breakout and relative weakness in small-caps is casting a shadow on the current rally. The Russell 2000 represents, uh, 2000 stocks and it would be nice to have them on board to confirm strength in large-caps.