It makes perfect sense that higher oil prices could derail (no pun intended) transports as the implications are clear. But the truth might surprise you. From Chart 1 below, you'll see that oil prices have been rising dramatically over the past 6 years. The price per oil was below $20 per barrel in 2002. That seems almost unfathomable as we contemplate $110 per barrel oil. That's nearly a six fold increase in the price of oil over a six year period. There's no possibility that transportations could thrive in that environment, correct? I mean, it just doesn't make any logical sense. Or does it? Supply and demand drives oil prices just as it does any other commodity or financial instrument, at least from an economic perspective. As the world economy was strengthening after our 2000-2002 bear market, oil prices naturally rose and they continued rising. Economic growth was sustained for a very long period and oil prices went along for the ride. Transports also benefit during economic expansion. So long as demand is at least partially responsible for higher oil prices, then transports can also thrive simultaneously. Now take another look at the Chart 1: 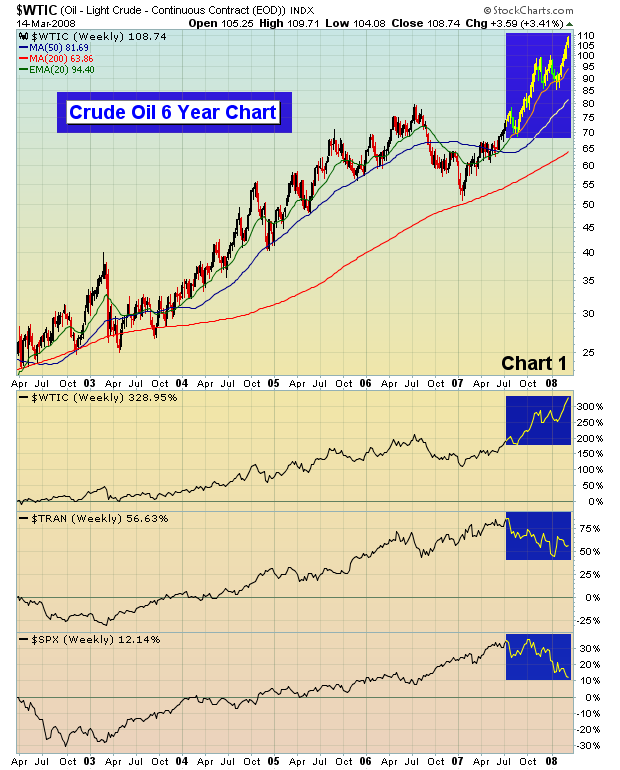 Crude oil rose dramatically during our economic expansion, but that expansion began to slow at the onset of credit issues relating to subprime loans that surfaced in July 2007. From the Chart 1, you can see that both crude oil and transports far outperformed the S&P 500 during the expansion period. But notice in Chart 2 the inverse relationship that's developed since July 2007: 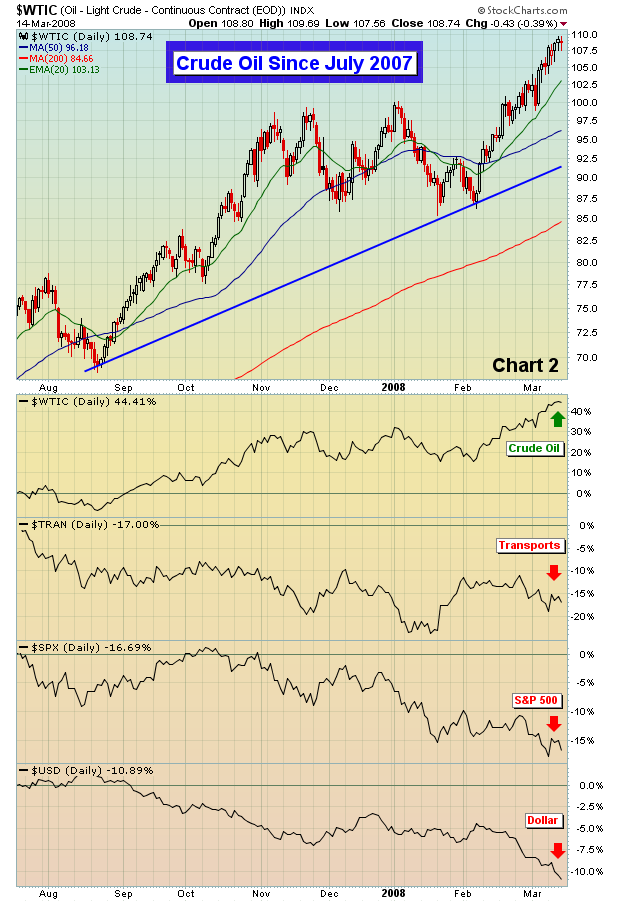 Crude oil definitely was rising from increased demand during global economic expansion. But it also was benefitting from the weak dollar. Since July the dollar index has tumbled, down another 10% in the last 8 months. It's the spiraling downward dollar that is fueling crude oil's continuing advance. It has been that same weak dollar that has helped to fuel other commodities like gold, silver and copper. I'm not saying it's solely responsible, but the extremely weak showing of the dollar is, at a minimum, aiding the commodity bulls. I believe the one event that could turn the tide on commodities is the lowering of interest rates by the European Central Bank (ECB). World markets are suggesting that the economic weakness felt here in the U.S. is not isolated. To date, the ECB has been adamant that inflation is the primary concern and rates abroad have remained elevated. The interest rates here in the U.S. are heading lower, so until the ECB changes its policy stance, commodity bulls will likely reap the rewards.

At the hint of an ECB rate cut, we'd lock in any and all commodity profits.