THE FED'S IN A BOX ... I've written recently about the Fed turning its attention away from the economy and back to inflation. Unfortunately, this week's market downturn is going to make its job a lot harder. The Fed apparently concluded that its easing program since last September would be enough to stabilize the stock market and the economy. This week's stock drubbing calls that analysis into question. How can the Fed raise rates to fight inflation with stocks tumbling? It can't. That should keep the dollar from rallying much further and could give a boost to gold. Money moving out of stocks and into bonds is also keeping long-term rates from moving up any further. Here's the problem. The market can't expect anymore help from the Fed. To lower rates again would give inflation another leg up which is a big part of the problem. Rising inflation and a weak economy make for stagflation which we haven't seen since the 1970s. One of our readers asked if "cash was trash" in an inflationary environment. Right now, cash looks better than stocks.

BEAR FUNDS ARE RISING ... Outside of bonds, the only other markets that gained ground today were bear funds. We've shown these two bear funds before, but here they are again. Chart 1 shows the Short S&P 500 ProShares Fund (SH) reaching a three-month high. Chart 2 shows the ProShares Ultra Short Dow 30 (DXD) acting even stronger. 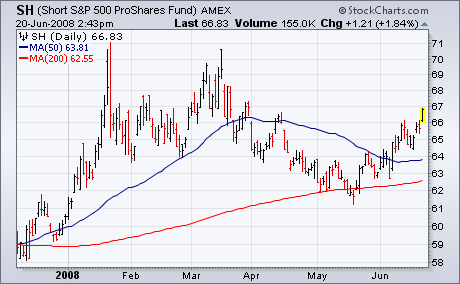 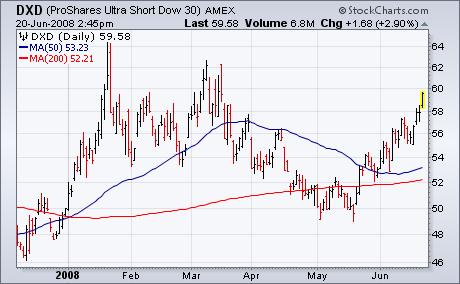