Sector performance in May and June shows the bear extending its grip into other key sectors. The Financials SPDR (XLF) and the Consumer Discretionary SPDR (XLY) woke up the bear with dismal performances in May. The first PerfChart shows sector performance from 1-May until 2-June, which is basically the month of May. XLF and XLY led the way lower in May. Notice that the Industrials SPDR (XLI), Materials SPDR (XLB) and Technology SPDR (XLK) held up relatively well in May. In fact, selling pressure in May was pretty much limited to the financial and consumer discretionary sectors. 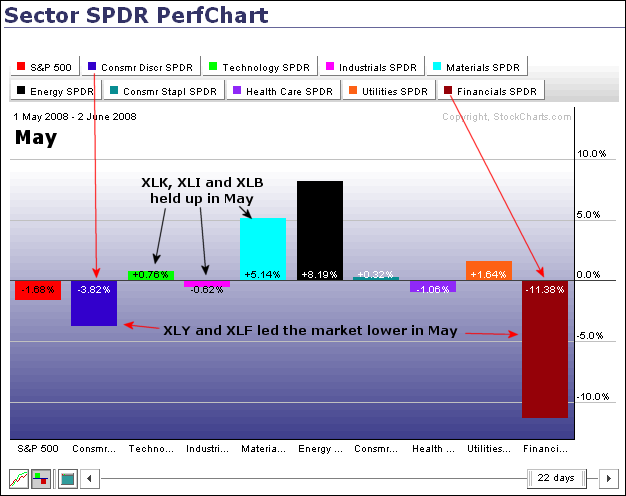 The second PerfChart shows sector performance from 3-June to 1-July, which is basically the month of June. There are two items worth noting here. First, the Technology SPDR, Industrials SPDR and Materials SPDR declined rather sharply in June. These three held up in May, but fell apart in June as selling pressure expanded among the sectors. Second, the Utilities SPDR (XLU), Consumer Staples SPDR (XLP) and Healthcare SPDR (XLV) held up the best in June. Well, outside of the Energy SPDR (XLE) that is. 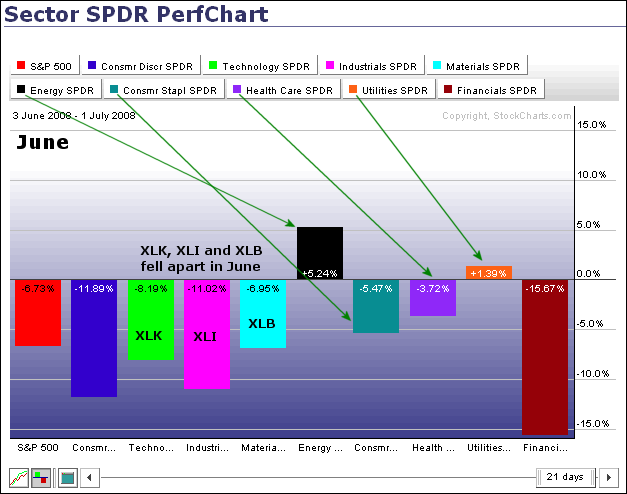 Utilities, healthcare and consumer staples represent the defensive sectors. No matter what happens in the economy, we still need electricity (XLU), toothpaste (XLP) and medicine (XLV). While the S&P 500 moved lower in May and June, XLU edged higher both months and showed relative strength. XLV and XLP are down over the last two months, but less than the S&P 500 and this shows less weakness, which can also be interpreted as relative strength. Fund managers that are required to be fully-invested in stocks are no doubt watching these relative performance numbers and looking for the sectors that are holding up the best.