While we tend to focus more on the short and intermediate term, we notice that there is a lot going on in the long term time frame.

Most obvious is the breakout above the top of a long-term trading range. The breakout is decisive (more than three percent), so the technical assumption is that it is unlikely that prices will fall back below the line of resistance, which is now support.

After a breakout we expect prices to correct back toward the point of breakout. We can see that the index is approaching the top of a rising trend channel, and, when that is reached, it would be a logical time for a correction to begin. 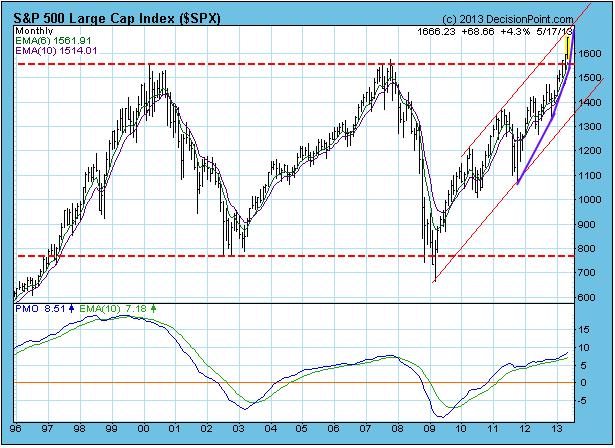 However, we noted in our blog earlier this week that a parabolic up move appears to be in progress. On the chart this has been annotated as purple trend lines with ever-increasing angles of ascent. Parabolic moves are signs of mania in the market, and this can cause prices to move higher and faster than would be considered reasonable. These moves can be fun to ride, but it is virtually impossible to know when they will end. When they do end, the reversal is usually abrupt, and the decline breathtaking. The most exaggerated parabolics occur in prices of a single stock or commodity. With an index composed of many stocks, it should be more subdued.

Conclusion: The S&P 500 is in uncharted territory, and the only resistance is the top of the rising trend channel, at which point we would expect a consolidation or correction toward the point of breakout to begin. The long-term breakout implies that prices are going to go higher, and the parabolic nature of the advance implies that it is likely to accelerate.