First, let me say Happy Halloween to all!  It's an exciting time for many, but especially the children.  I know our neighborhood is always buzzing with kids anticipating the sugarfest!  :-)

Unfortunately, the stock market bears were SPOOKED on Halloween this year.  I've said for months the biggest problem with shorting all the warning signs I've been seeing throughout 2014 are the central bankers.  We've seen it all too often here in the U.S. - just when it appears there's been irreparable technical damage inflicted on stocks, the Fed steps in with another round of QE or dovish announcements.  On Friday, it was Japan's turn as the Bank of Japan announced an increase in its asset purchase program.  That lifted stocks around the globe and begged the question, "Is this a Trick or Treat?"

Well, no one knows for sure, but I do not pay attention to the headline news that reminds us the key benchmark indices - Dow Jones and S&P 500 - are hitting all-time highs.  Don't misunderstand me, it is significant because it's lifting portfolios everywhere and we're all investing to make money.  But it's more important to me to gauge the risk that I'm taking in order to achieve those nice returns.  Investing heavily while knowing there are signs of an impending major correction or bear market right around the corner is not prudent.

So is this the renewed vigor of a runaway bull market or should we be cashing in our chips?  Let's take a look beneath the surface of this latest rally and then you decide how much risk you're willing to take.

It's important to realize that this latest all-time high on the Dow Jones and S&P 500 comes with 4 out of 9 sectors breaking out recently to year-to-date highs.  3 of those 4 sectors are defensive sectors - healthcare, consumer staples and utilities.  Only industrials have made the breakout among the aggressive sectors with financials and technology on the cusp of doing so.  If we break it down even further, here are the percentages of industry groups within each sector that have broken out:

Financials:  33% (excluding the defensive REITs, this would be 21%)

To summarize, 60% of the industry groups in defensive sectors have supported the breakout in our major indices, while just 25% of industry groups in aggressive sectors have gone along for the ride.  That's a significant variation that certainly suggests traders are hedging their bets and not fully believing in this rally.  And while treasury prices have finally started falling, sending the 10 year treasury yield ($TNX) back above 2.30% and its 20 day EMA, treasuries have been heavily purchased throughout 2014 as our major equity indices have begrudgingly pushed to fresh highs.

This just doesn't pass the smell test to me, but we can't ignore the "candy store" remaining open at central bankers everywhere.  This is unprecedented and really makes technical analysis more challenging currently.  Technical analysis does require the study of history and historical prices and the Fed's (and all central bankers) QE measures have not been a part of history - at least not to the extent we're seeing it now.

There are industry groups that look particularly attractive, but before I get to those, let's take a look at one positive development technically.  The weekly MACD on the S&P 500 has been signaling slowing momentum throughout 2014.  The weakness we saw in October actually has helped to alleviate that technical issue moving forward.  Check out this chart: 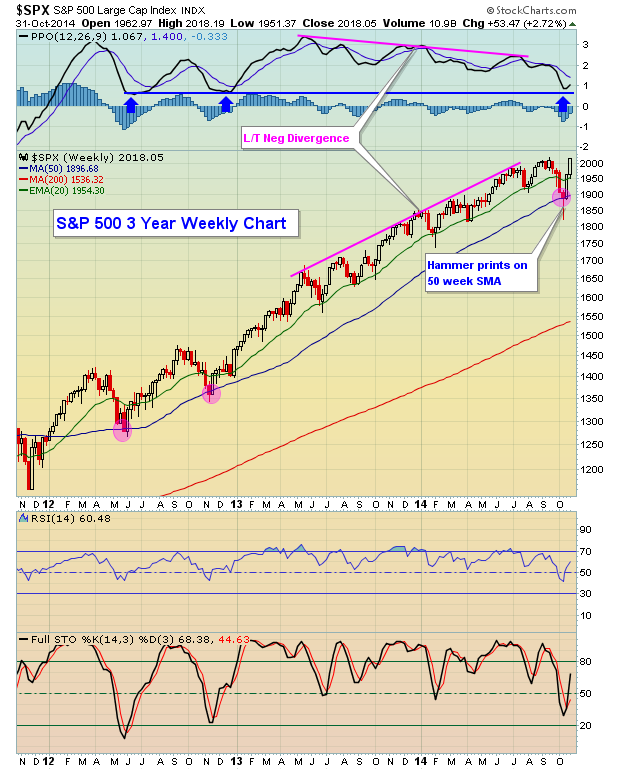 So I consider this at least one red flag erased.  There are plenty more to go though, including the lagging Russell 2000.  While its larger counterparts are breaking out, this small cap and much more aggressive index remains roughly 3.5% from a breakout.

We want to see leadership from aggressive areas of the market.  Despite all the Fed's great intentions, many traders simply haven't bought into all the hype that the Fed has resuscitated our economy and it will perform well on its own as we move forward.  There's also the concern of how the Fed reverses its bloated balance sheet.  But I'll leave that for another day.

Today, let's talk about a key aggressive industry group that is leading the recent action.  Consumer Finance ($DJUSSF).  We finally saw a breakout last week after a long basing period in this group that can be seen on both the daily and weekly charts below: 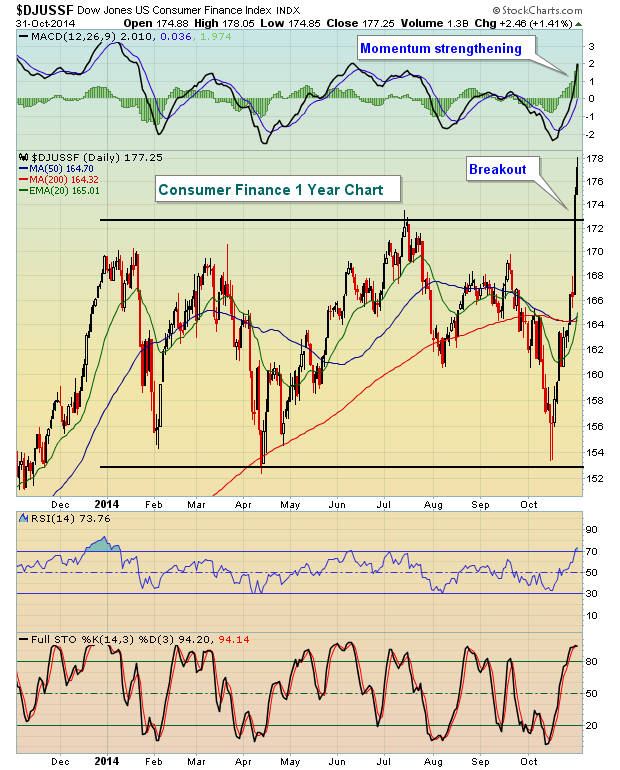 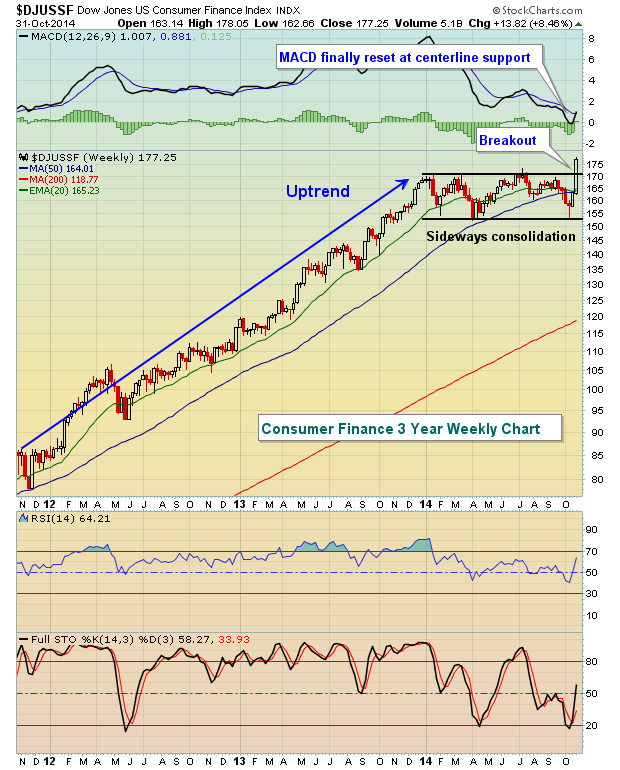 I am now offering a FREE chart of the day every day the stock market is open. It will be highly educational and also present possible trading opportunities.  Monday's chart of the day features perhaps the best stock within that consumer finance space.  CLICK HERE to register.