Two Indicators in One

Indicators generate lots of signals and many of these signals are just noise. It is imperative that chartists understand how their indicators work and exactly what these indicators are saying. Understanding the ins and outs of an indicator will help chartists determine which signals to take seriously and which signals to ignore. Today we will look at MACD, one of the most popular momentum indicators.

MACD as a Trend Indicator 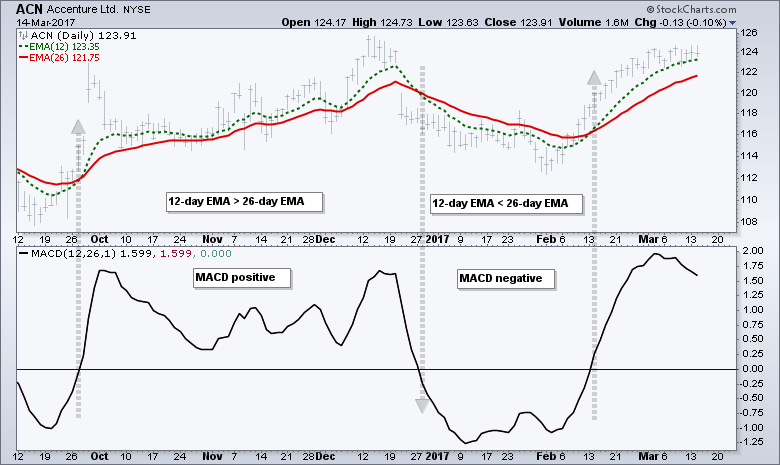 MACD as a Momentum Indicator

The convergence and divergence of these moving averages captures the momentum aspect of MACD. The chart below shows Medtronic with four different combinations. The first two examples show MACD moving from uptrend to downtrend (positive to negative). First, the positive difference between the two EMAs is narrowing when MACD is in positive territory and falling. This means upside momentum is slowing, but the trend is still up. Second, the negative difference between the EMAs is widening when MACD is in negative territory and falling. A downtrend with increasing downside momentum is the most bearish combination for MACD. 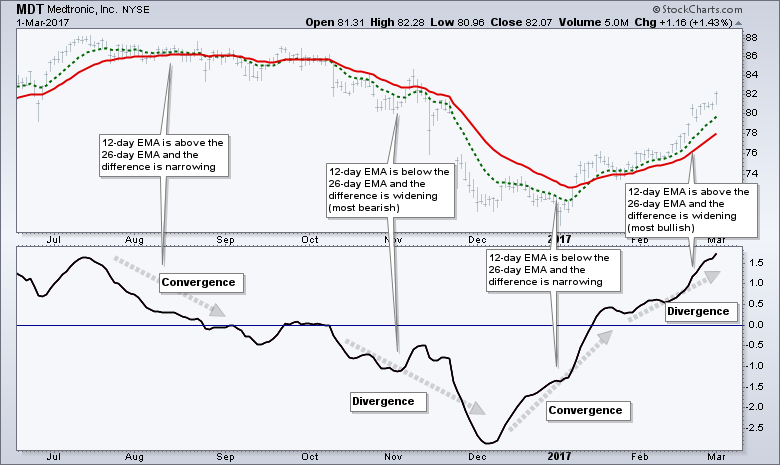 The next two examples show a move from downtrend to uptrend (negative MACD to positive MACD). First, the negative difference between the two EMAs is narrowing when MACD is in negative territory and rising. This means downside momentum is slowing, but the trend is still down. Second, the positive difference between the EMAs is widening when MACD is in positive territory and rising. An uptrend and increasing upside momentum is the most bullish combination for MACD.

Beware of Trends that are Simply Slowing

The momentum aspect of MACD is a double-edged sword. Decelerating momentum seems to warn of a an impending trend reversal, but does not always result in an actual trend reversal. The chart below shows Microsoft with MACD and the MACD signal line, which is a 9-period EMA of MACD. First, notice that MACD surged in July when the stock surged over 20% and then plunged in August when the stock traded flat. This is typical for momentum oscillators because they gravitate towards the centerline during a consolidation or flat trading period. This can be expected because momentum is essentially flat during a trading range. Thus, a surge-plunge sequence in MACD is not always bearish because a consolidation after a sharp advance is just a rest designed to alleviate overbought conditions. 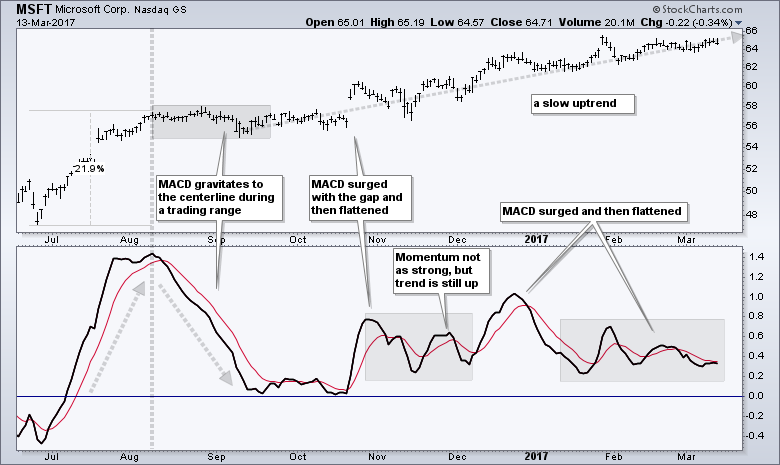 Looking further down the chart, Microsoft traded flat into October and then resumed its advance with a gap. Again, MACD surged as upside momentum accelerated and then fell back as momentum decelerated the next five weeks.  Upside momentum in late November was not as strong as in late October, but MACD was still positive and the trend was still up. The same thing happened in December as MACD surged, fell back and flattened. Again, upside momentum in February was not as strong as in December, but the trend was still up and decelerating momentum did not derail the uptrend.

Keep the Big Trend in Focus

Chartists must also analyze the actual price chart to put MACD signals into perspective. MACD, after all, is just an indicator and indicators are secondary to price action. The chart below shows Abercrombie & Fitch (ANF) breaking down in May with a move below support and the 200-day SMA. The long-term trend was clearly down at this stage and this means chartists should ignore bullish signals. In other words, do not fight the bigger downtrend. Even though MACD turned positive from mid July to late August, a look at the price chart revealed a bounce back to broken support, which turned into resistance. ANF was just retracing a portion of the prior decline with a counter-trend bounce. 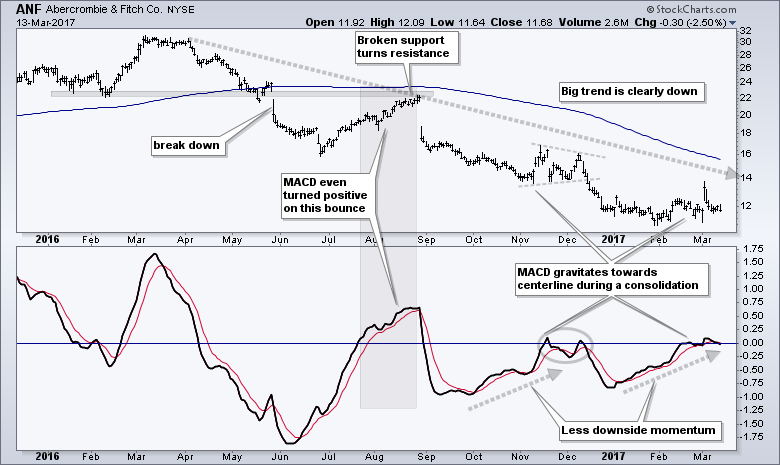 MACD fell sharply when ANF plunged in late August and then started moving higher in October. Downside momentum decelerated and MACD even edged into positive territory in late November. The move into positive territory was not a robust signal because the bigger trend was down. Conversely, the subsequent moves back below zero were robust signals (gray oval) and foreshadowed a move to new lows in the stock.

MACD and other momentum indicators can add value to the analysis process, but chartists must first understand what they are implying and when to ignore signals. Decelerating upside momentum does not always lead to a sustainable trend reversal. Similarly, decelerating downside momentum does not always reverse the downtrend. Even crosses of the centerline should be viewed in context with the bigger trend. In short, chartists should focus on robust bullish signals when the bigger trend is up and robust bearish signals when the bigger trend is down. Ignore the rest!