Many market pundits on CNBC continue to predict a market top, discussing how we've run too far too fast and that valuations are too high and blah, blah, blah.  Fear sells and CNBC is all about their ratings and advertisements.  There's an occasional nugget of solid information, especially if there's a worthwhile guest on to listen to.  But keep in mind what their end goal is - to make money, and usually at your expense.  I'll watch CNBC for guest appearances and streaming news, but it's typically muted and in the background.

Market tops come in all shapes and sizes and they don't form in the same fashion each time, but rotation is an important component as it simply makes sense that money will turn defensive before the market begins to drop.  Below is a chart of the 2007 market top that shows key relative ratios that gauge whether money is rotating towards offense or defense: 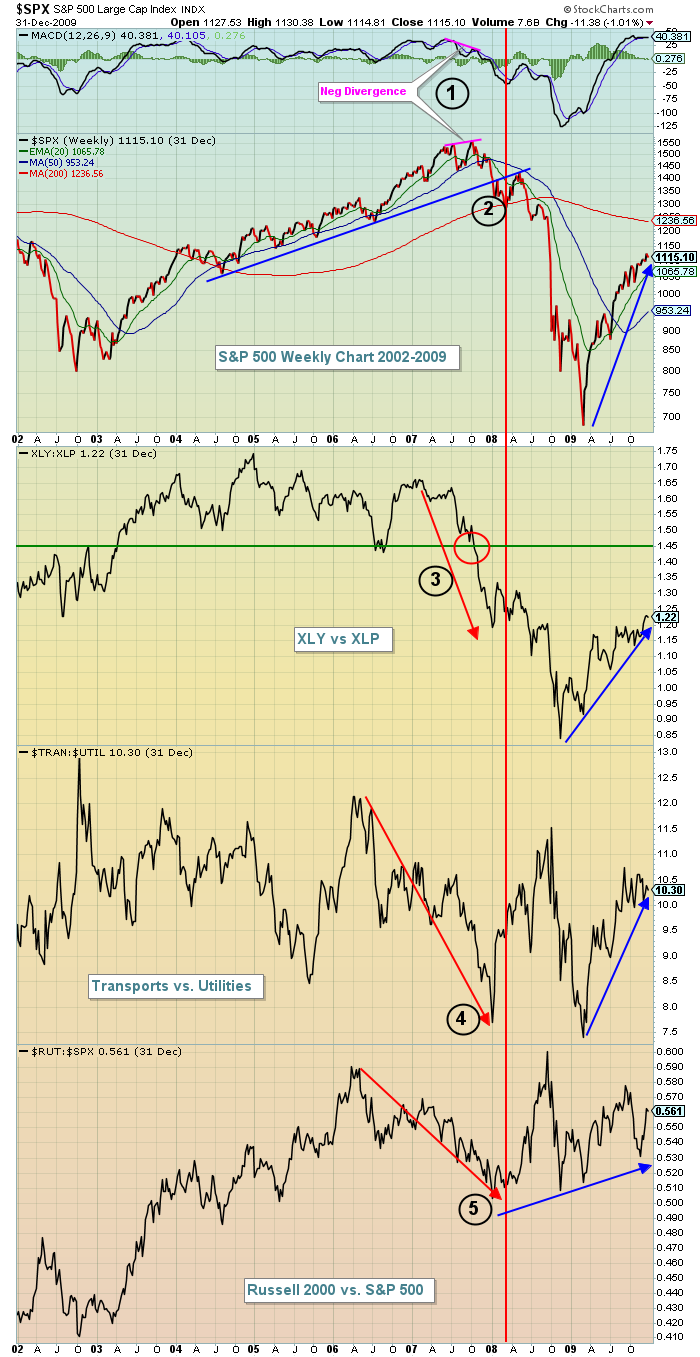 1.  Momentum was clearly slowing, as evidenced by the weekly negative divergence that emerged on the final price high in October 2007.

Slowing momentum, price breakdowns and rotation towards safety is a very bad combination and a major warning sign, if nothing else.  As it turned out, it marked the top just before a major stock market selloff.  Now let's fast forward to 2017 and see how these same signals stack up.  First, let's look at the chart:

I showed both the Dow Jones and S&P 500 on this chart to highlight the fact that our key major indices both are doing extremely well.  Now let's discuss the five areas where we had warnings in 2007:

1. The weekly MACD could not be any stronger.  It has been rising with each price breakout, suggesting that momentum is accelerating, not weakening as it was in 2007.

2. There clearly have been no price violations.  If anything, the S&P 500 consolidated from 2014 to mid-2016, before breaking out in a big way post-Brexit, then again after the November U.S. presidential election.

3. The XLY:XLP ratio has been climbing nicely over the past year - much different than what we saw in 2007 - but we haven't cleared the 2015 relative high.  A breakout above that level would be extremely bullish.

4. Transports vs. utilities have also increased significantly since November, a good sign, but we haven't seen this ratio clear its early 2015 high and the ratio has been falling in 2017 thus far.

5. The RUT:SPX ratio has been declining since 2014, but it's very strong for the past year.

I see the absolute price action on our major indices to be very strong and, in my opinion, relative price action continues to support a higher S&P 500 in 2017.  Breakouts on the above key relative ratios would add confirmation to this belief while deterioration in these ratios going forward would be warning flags to be confirmed by price breakdowns.

I remain bullish until I see proof to the contrary.