My Wednesday message showed Brent Crude Oil trading over $60 for the first time in more than two years. Brent is trading over $62 today. It also showed West Texas Intermediate Crude Oil (WTIC) trying to break through overhead resistance at $55. Chart 1 shows WTIC trading slightly above that resistance barrier today ($55.69). If it's able to hold above that level, that would mark its first close over $55 in two years. That would be an impressive upside breakout and would lend more support to energy shares. 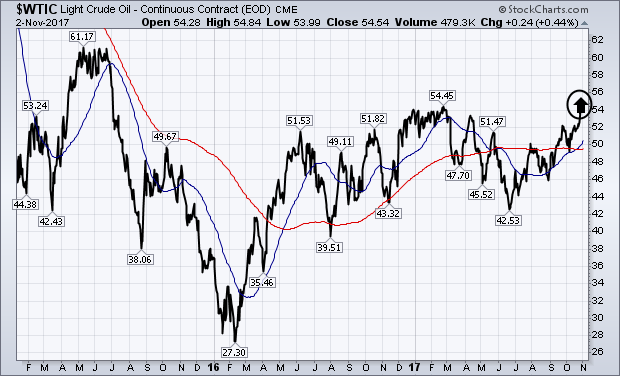 My Wednesday message also showed the Energy Sector SPDR (XLE) on the verge of reaching a new six-month high. The XLE has actually been rising faster than the S&P 500 over the last two months. It should do even better if WTIC completes its bullish breakout. But there's another energy ETF that's doing even better than the XLE. Chart 2 shows the S&P Oil & Gas Exploration & Production SPDR (XOP) already trading at the highest level since May. And it just cleared its 200-day moving average. What caught my attention, however, was the fact that the XOP is rising much faster than the XLE. That can be seen by the XOP/XLE relative strength ratio in the top box which has experienced an upturn of its own. Since the start of September, the XOP has outpaced XLE by an 18% to 10% margin. Both have outpaced the 5% gain in the S&P 500 over the same two month period. 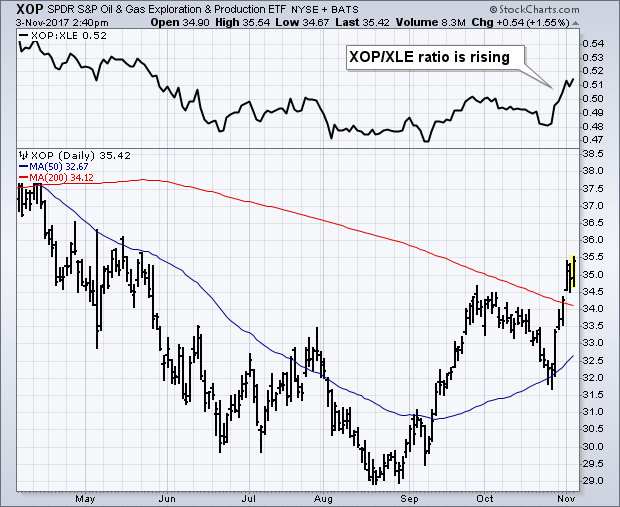