It seems simple enough.  Buy stocks/ETFs that are outperforming the benchmark S&P 500.  Well, that's part of it for sure.  But it really goes a lot deeper than that.  StockCharts.com provides you a myriad of ways to evaluate relative strength.  I tend to use relative ratios most of the time so I'll focus on this method in my article.  As an example, let's compare the consumer discretionary sector (XLY) to the S&P 500 ($SPX) by using the symbol "XLY:$SPX": 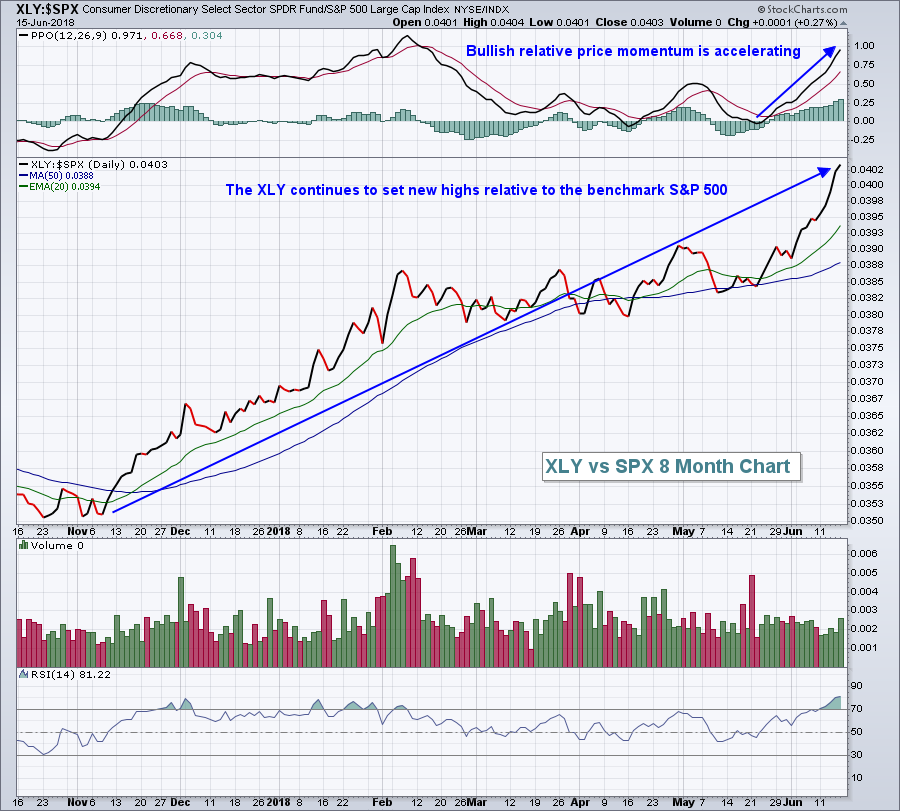 Consumer discretionary is one of four "aggressive" sectors that historically perform very well on a relative basis during bull markets.  The others are technology (XLK), industrials (XLI) and financials (XLF).  As long as signals point to a sustainable bull market, which I believe we have right now, you want to overweight these groups.  For a "WOW!" moment, check out what a $10,000 investment in the S&P 500 at the 2009 bear market low would be worth today, followed by similar $10,000 investments in the XLY, XLK, XLI and XLF at that time:

I know many preach diversification and, as you move closer to retirement, it's probably a good idea.  But those that have many years left in the work force should really think about how much diversification you really want in the stock market.  For me, diversification equals lower returns and a smaller nest egg.  There are certainly times to get more defensive and the stock market will provide us clues when that time is appropriate.  But right now, we're in the midst of a raging bull market and diversification is costly.  You can agree or disagree with me and I'm sure many of you will choose the latter, but facts are facts.  Bull markets produce excellent relative strength in the four aggressive groups so overweighting those groups should be considered - even by the most risk averse investors.

Sector relative strength is only the first part of the equation.  If you invest solely in sector ETFs, you can stop right here.  But if you want to dig deeper to build a portfolio of outperforming stocks, I'd only consider stocks that have proven time and again they can be counted on to outperform their peers.  I'll use Netflix (NFLX) as a perfect example of a stock that could be a staple in anyone's portfolio:

I know hindsight is a beautiful thing, but NFLX has been an outperformer for many years.  It didn't just happen last week.  Finding stocks that are outperformers can be particularly rewarding.  $10,000 invested in NFLX on March 9, 2009 would be worth $702,691.  It doesn't take but one NFLX in your portfolio to erase a multitude of investing sins.  The way to uncover a jewel like NFLX is to evaluate stocks using relative strength.  Yes, the weakness in NFLX in 2011 would have been difficult to "ride out".  After all, it dropped 75-80% in 6 months!  But even if you had waited until it made the breakout above the low 40s in mid-2013, you'd be looking at a stock that's nearly grown tenfold in 5 years.

You want to own companies that show rising blue directional lines (from left to right) on all the various absolute and relative charts identified above.