Before heading off on my vacation, I mentioned the breadth indicators for the major exchanges were getting weak, but the breadth for the $SPX was still very bullish. This week the main exchanges saw the breadth crash to twenty-four month lows.

The Bullish percent index for the NASDAQ is now below 50% but more importantly it has declining tops since the beginning of the year. Notice the series of lower highs on the BPI compared to the higher highs on the $COMPQ. This divergence is huge and meaningful. It is very important that the market bounce from here. Notice at the other major tops marked by blue vertical lines, how the declining highs in the Bullish percent Index occurred before the market broke down.

The Percentage of stocks above the 200 DMA in the bottom panel is only at 42% shown in black. THat means that on Friday's close, over 57% of the stocks  were under the 200 day moving average! These are not levels to expect new highs from. This also looks like a failed test of the August high on the $COMPQ. 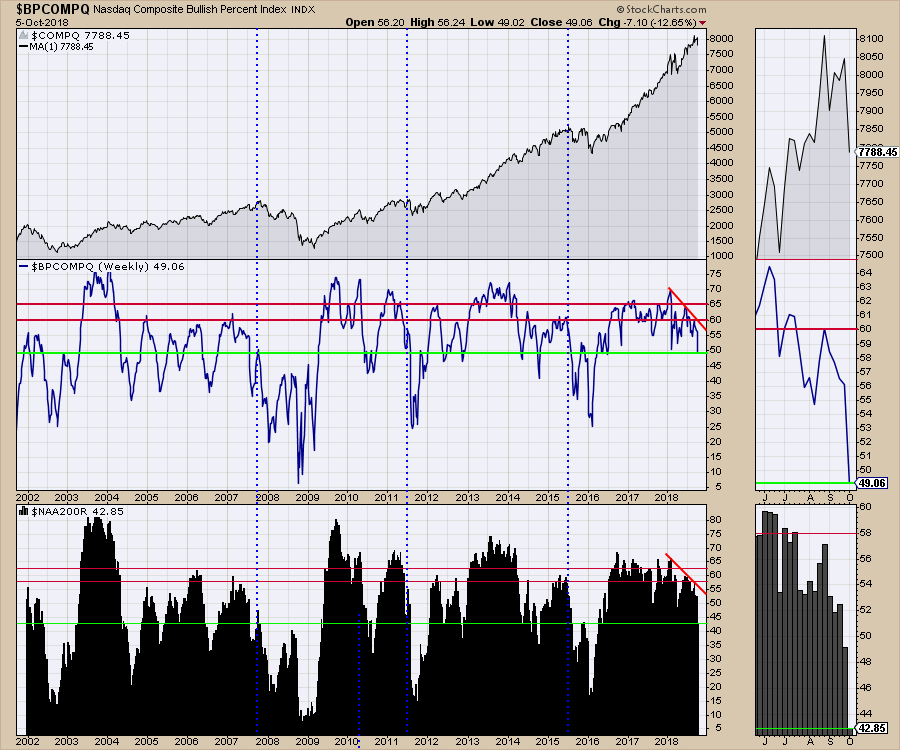 On the NYSE things are a little better, but let's not split hairs. The $NYA index is in trouble as well. The Bullish Percent Index  (BPI) has been struggling to get back above 60% for a while. It has also made lower highs in each of the last three months in the zoom box. This divergence is now playing out. While the BPI is still above the early 2018 lows, it is the failure to get strong above 65 % again after that deep low that is meaningful. Looking left, most major tops happened when the deep oversold rallies fail to get broad participation at the next high. We have to be on notice that this is at least a potential major top.

The low reading on the % of stocks above the 200 DMA ($NYA200R) did have a lower reading in late March than the current one. But the failure to get back above 65% is another warning shot. Notice where the bull market tops peaked out at after having deep pullbacks on the $NYA200R before. You will get some rally, the question is how high? Now we are starting the breakdown from an extremely weak level.The European PIIGs issue in 2011 wasn't a clear turn at it rallied sharply but still caused a big selloff. Look how clear 2007 and 2015 are. The blue lines show these moments. I have dropped a blue line there for the current levels because it definitely qualifies as a major potential topping weakness. We'll watch to see how it plays out. 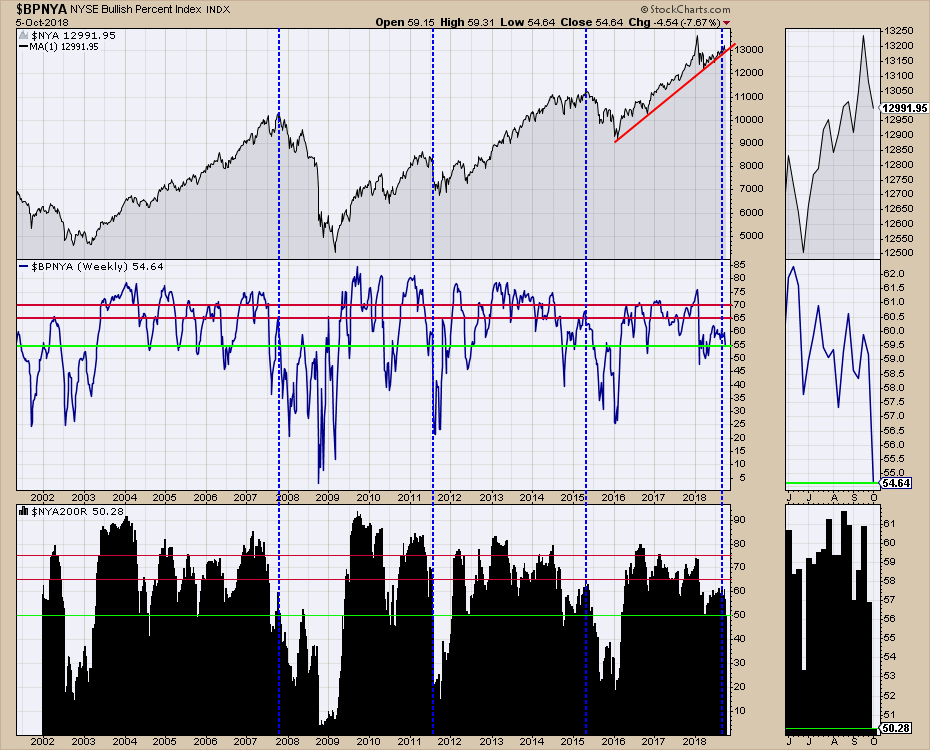 The $SPX BPI is much more robust suggesting a group run into the $SPX by managers into only the biggest broadest stocks.

In this chart below, what I like to look for is how big is the bounce after a deeply oversold condition. Can it generate enough breadth to start the next bull market? 2007 and 2015 both had big pullbacks below 50 % on the BPI. The  following rally was big in each case, but not enough to push the breadth to start a new bull market. Then the rallies failed and the markets rolled over. Well on this bounce it is the worst of the three in terms of breadth. It is similar to 2007 in that it got into the 60% and above level, but maxed out there while making new highs. Both 2011 and 2015 saw higher highs on the BPI before rolling over after a big down move below 50%. 2011 looked extremely strong only to still fail. So the weak drop in the spring of 2018 suggests caution to me later in the year. Guess what, so far we have failed to get the breadth in the rally.

Lastly, the $SPXA200R is showing the same signals. A giant pullback to really low levels and then a failure to rally broadly while making higher highs. Without question it at least adds caution that a potential major top is in place. Trade accordingly. 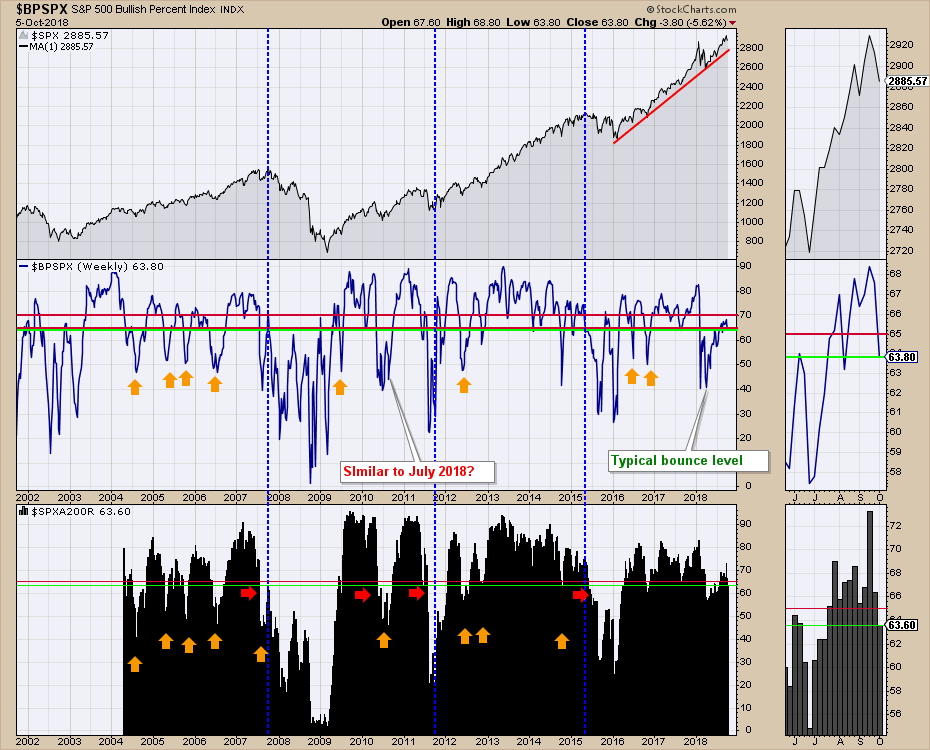 This appears to be a pivotal time for the markets. I am hosting an online and in person conference in Calgary on Saturday October 13th. Could it be a better time to hear some live speakers discuss the current setup?

I have five very exciting technicians joining me on Saturday October 13th from 8 AM MT to 5 PM Mountain time.  If you would like to hear some more thoughts around the current market setup and more discussion by me on these breadth indicators, please follow this link. It is a very affordable day and StockCharts members will be authorized to get the best discount. The Past President of the CMT Association will be presenting as well as two other American technicians who have written great books on TA. Jon Vialoux and I will round out the speakers list.  Please click here to register and use the savings code SC2018W. Can you really beat $35 CDN which converts to $28 USD for a whole day? 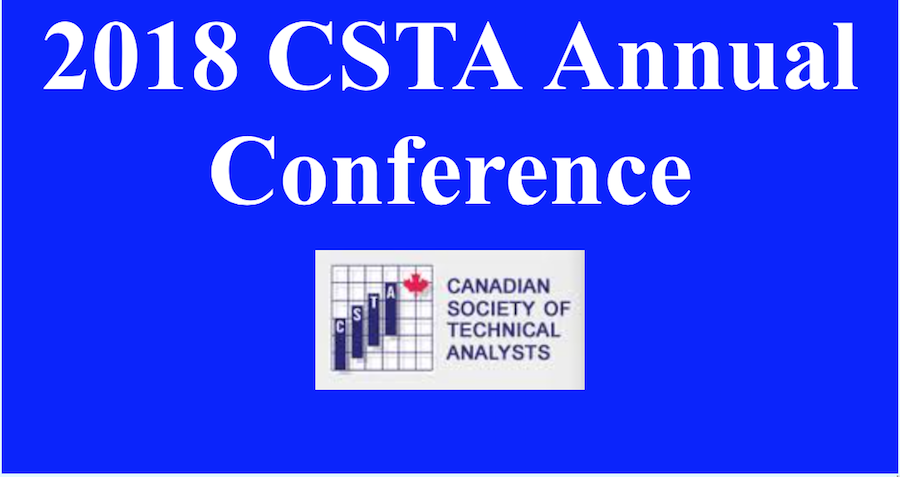