It was another bumpy week in the markets, as investors digested a barrage of political headlines which brought fear-induced selling to those areas most sensitive to the latest tweet. While the Tech-heavy Nasdaq was hardest hit, the Dow Jones Industrial Average held in surprisingly well last week, with several heavyweight stocks in this Index posting solid gains.

In addition to these select stocks showing strength in a tough market environment, they also have growth prospects that should help them continue to outperform – particularly once the market's volatility subsides. The fact that they offer a yield that's higher than the S&P 500 average of 1.9% also makes these stocks attractive. 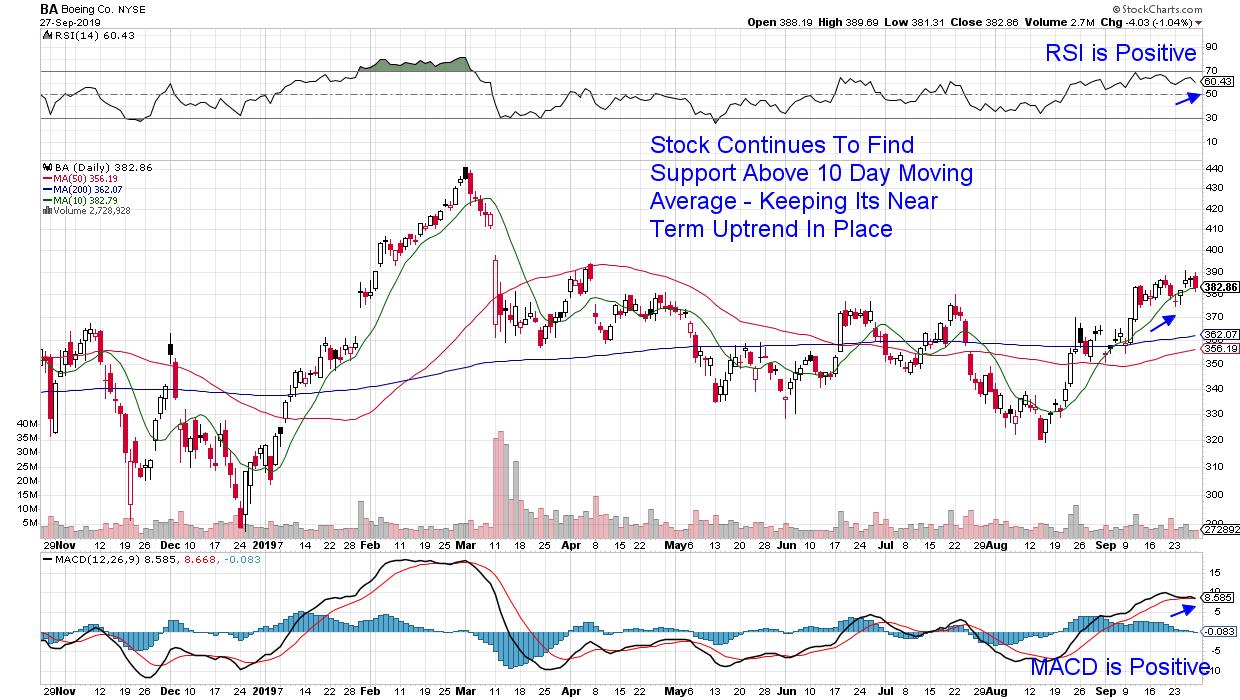 Let's begin with the Dow's largest component – Boeing Co. (BA). This company has had a lot to overcome over the past year, as 2 deadly plane crashes within the span of five months led to a mandatory grounding of their 737 MAX aircraft. While the impact may not be entirely behind them, Boeing has seen growth in U.S. government contracts alongside continued sales globally. In fact, the Pentagon announced the award of a $2.6 billion contract with Boeing after the market's close on Friday, which is on top of Air New Zealand's $1 billion Dreamliner order earlier in the week.

As you can see in the chart above, the stock is in a bullish uptrend as it continues to find support at its upward trending 10-day simple moving average. In addition, the Relative Strength Indicator (RSI) and Moving Average Convergence Divergence (MACD) are in positive positions as well.

In addition to a bullish chart, analysts are suggesting that the stock could hit a $450 price target if they can get their MAX 737 issues resolved. BA's CEO will be addressing Congress next month to review safety and other issues, which may help. 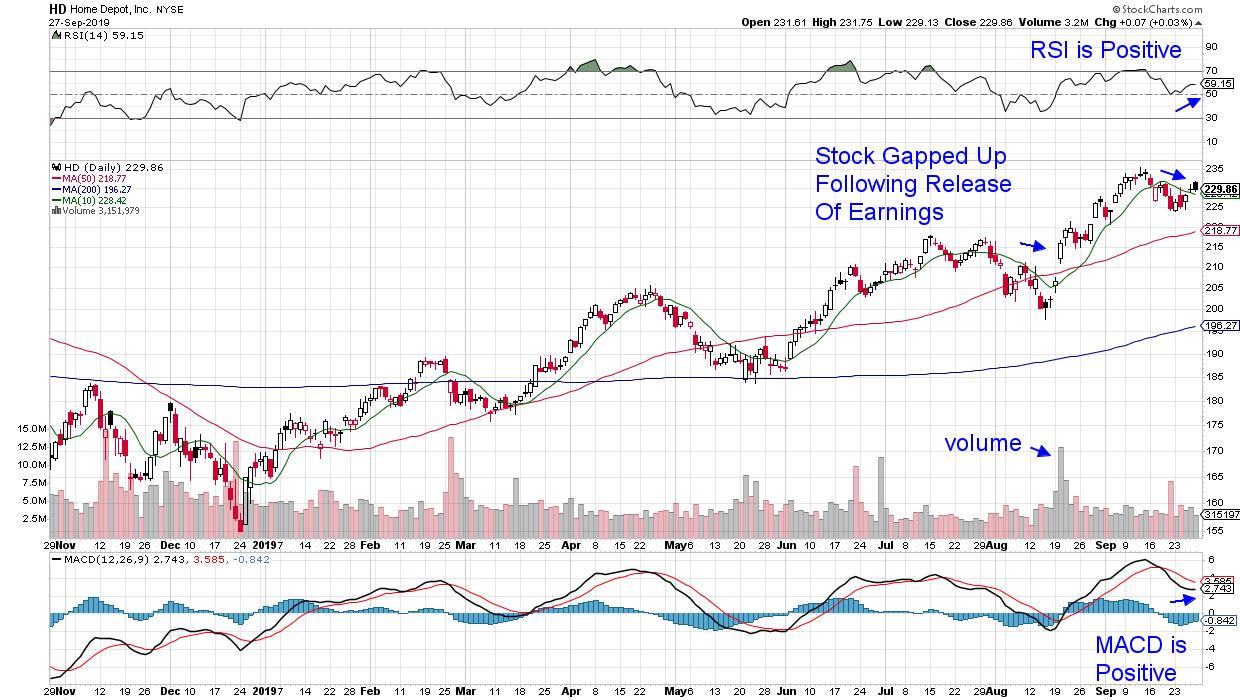 Next up is Home Depot (HD), which came out with their most recent earnings report in late August. While the numbers were not as robust as anticipated, management's comments regarding a 20% increase in digital sales, coupled with easy locker pickup options and other customer service improvements, has analysts raising guidance. Lower interest rates are also helping HD's outlook as increased home sales are leading to an increase in home improvement projects.

The stock experienced a gap up following their earnings release last month and the move was on volume, which was bullish. More recently, last week's break back above its 10-day moving average is near-term bullish, as is the fact that the RSI and MACD are both in positive territory. A break above $235.5 would be even more bullish for a continuation of this 2.4% yielder's uptrend. 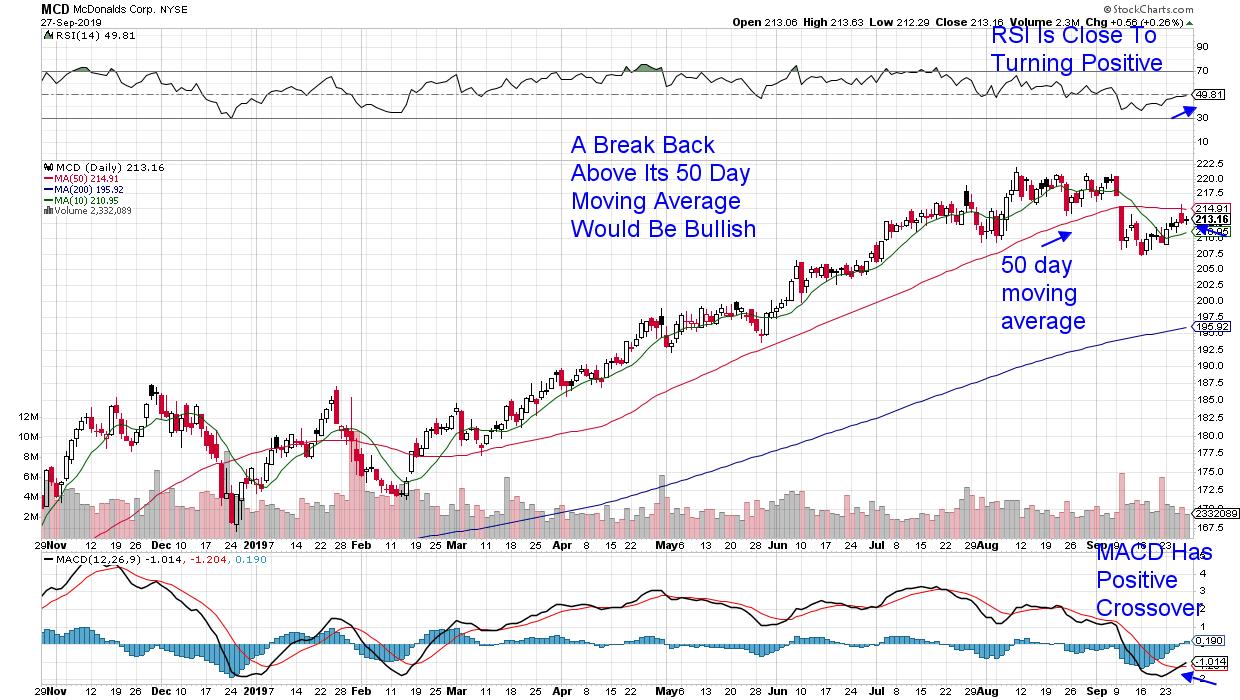 While the next stock has more work to do before being in a bullish position, last week's 1.8% rally put the stock closer to a needed break back above its 50-day moving average. McDonalds Corp (MCD) had been hovering around its all-time high in price before breaking down earlier this month.

The stock's drop below its 50-day moving average was spurred by fears of competition in the heated-up breakfast market following fast food company Wendy's announcement that they're entering the fray. More recent news from MCD that they're testing a vegan burger, while also opening a lab in Silicon Valley to help incorporate new technologies, has analysts back to being interested in the company while raising guidance for 2020 earnings.

Though the current volatility in the broader markets has some investors unnerved, the fact that stocks with a positive growth outlook are continuing to be supported is a positive.

For those who would like regular insights into areas of the market that are poised to outperform the markets, take a trial of The MEM Edge Report. This high performing bi-weekly newsletter provides stock picks as well as broader market analysis and sector insights you won't get anywhere else. You can trial the report for a nominal fee by accessing this link here.