The decline in the U.S. dollar continues. Chart 1 shows the Invesco US Dollar Index (UUP) dropping to the lowest level in two years. Previous messages have described some of the intermarket side-effects of a weaker greenback. One of them is that it's usually good for foreign markets. That also increases demand for foreign currencies. And right on cue measures of foreign stocks are hitting new records. 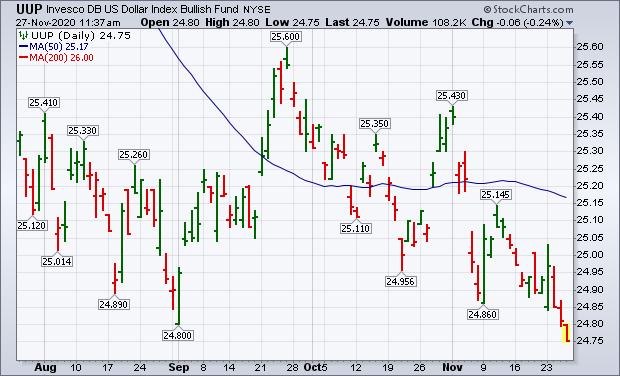 The daily bars in Chart 2 show the MSCI All Country World Index ex US (ACWX) moving above its January high to a new record. A big part of that recent gain has come over the last month as the dollar started its latest downleg. Foreign stocks are also starting to play catch-up to the U.S. That can be seen by the ACWX/$SPX relative strength ratio in the upper box. The foreign stock/U.S. ratio hit bottom at the start of September; and has since risen to the highest level in four months. And it's not far from a new eight-month high. That's a sign that investors may be rotating some funds from the relative safety of the U.S. and into foreign markets that had been lagging behind. Positive vaccine news may be the driving force behind that foreign rotation as investors become more optimistic on the global economy. Emerging markets have been the biggest beneficiary of the falling dollar. But foreign developed markets are also gaining ground. 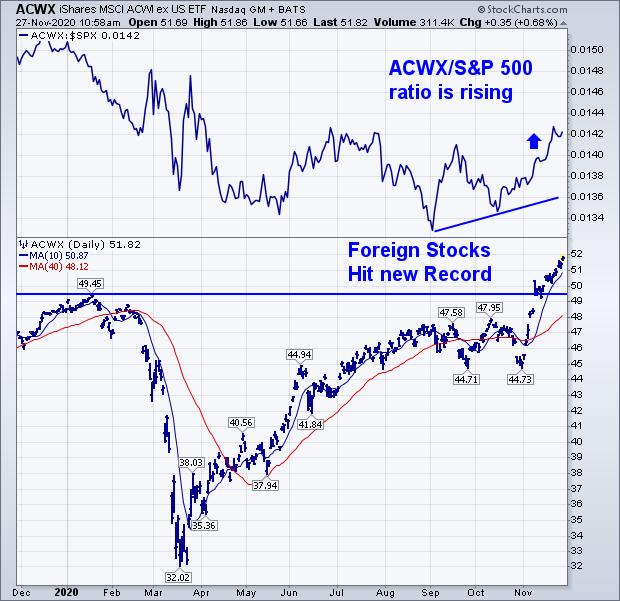 Chart 3 shows the MSCI EAFE iShares (EFA) moving above its January high to a new record. [EAFE includes developed stocks in Europe, Australasia and the Far East.] That puts them in sync with the Emerging Markets iShares (EEM) which are also in record territory. A lot has been written recently about the positive rotation in the U.S. into more cyclical parts of the stock market that stand to benefit from a stronger economy next year. The recent rotation into foreign stocks may be sending the same positive message. The fact that foreign stock ETFs are quoted in weaker dollars also gives them an added advantage. More optimism on the global economy and stocks may also be reducing the appeal for the safe haven qualities of the U.S dollar. 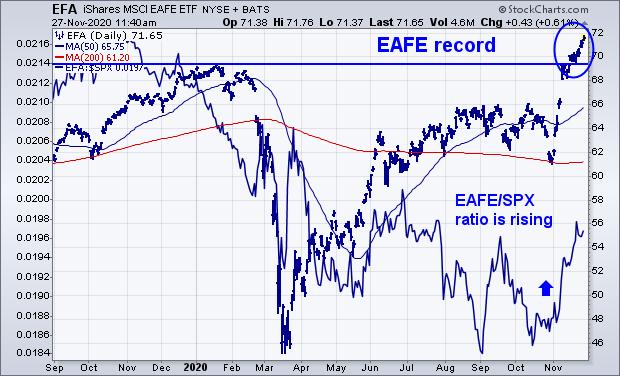 Editor's Note: This is an article that was originally published in John Murphy's Market Message on Friday, November 27th at 2:09pm ET.