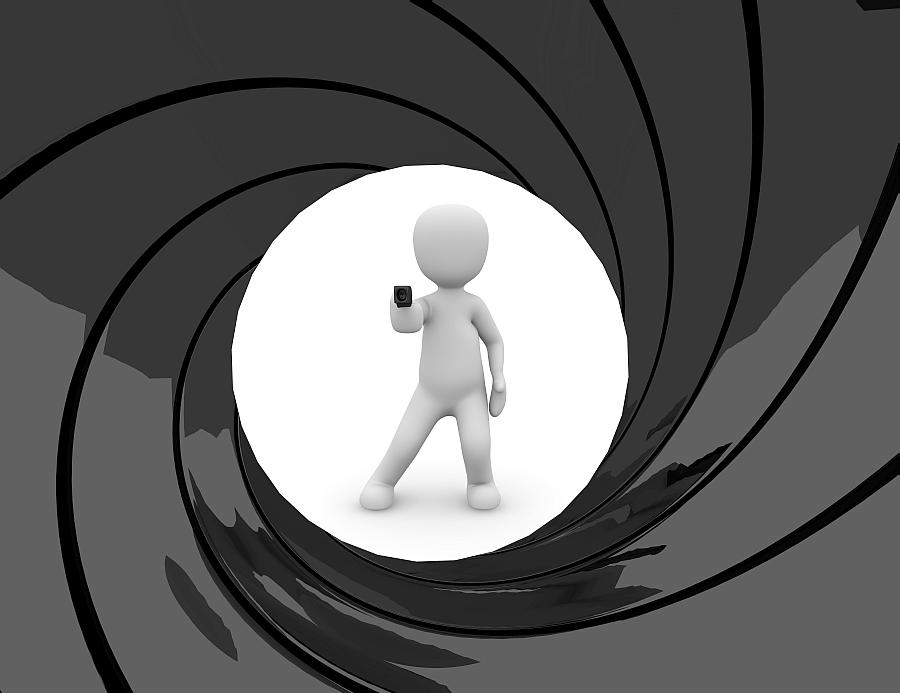 The Growth/Value relationship is always interesting to keep an eye on -- but even more so recently.

For a long period of time, roughly from late 2018 until Q3 2020, Growth stocks were beating Value hands down. 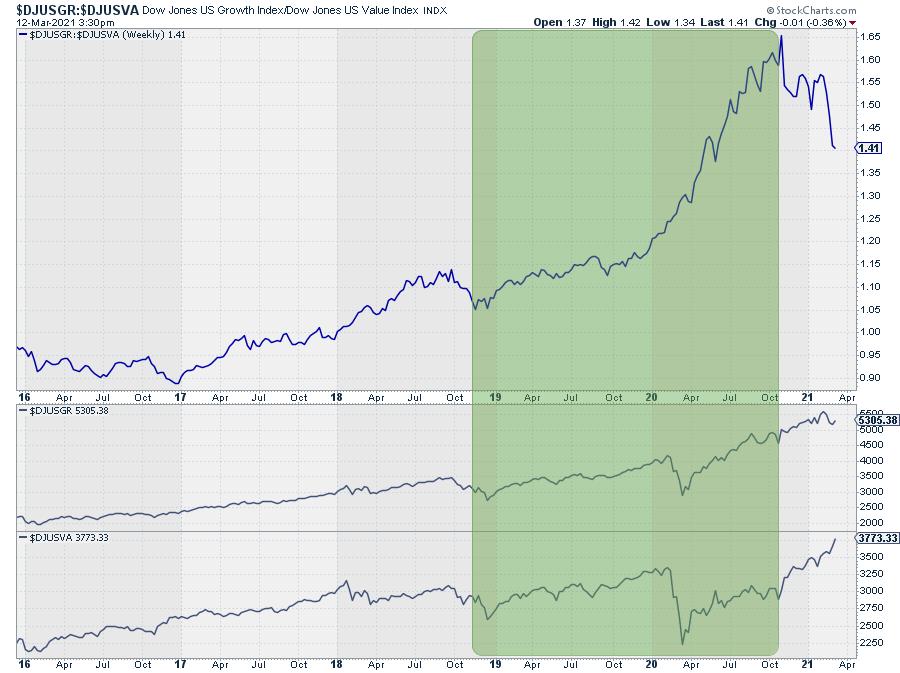 The chart above shows the Growth/Value relationship in the big pane and the individual indexes, DJ-Growth and DJ-Value respectively, in the lower two panes. The dominance of Growth over that period is easily spotted. $DJUSGR is trading well above its early 2020 high at the end of the green-shaded period, whereas $DJUSVA was not even close to that level. As a matter of fact, it was only marginally above the level it was at the end of 2018.

That started to change at the start of September 2020, while the first signs of a turn in the making already started to show up in July: see my article What About Growth vs Value Going Into the Second Half?, which describes the early signs of a rotation underway from Growth to Value while Growth was inside the leading quadrant and rolling over and Value was curling upwards inside the lagging quadrant.

The RRG below shows the Growth/Value rotation over a 30-week period starting 8 Sept. 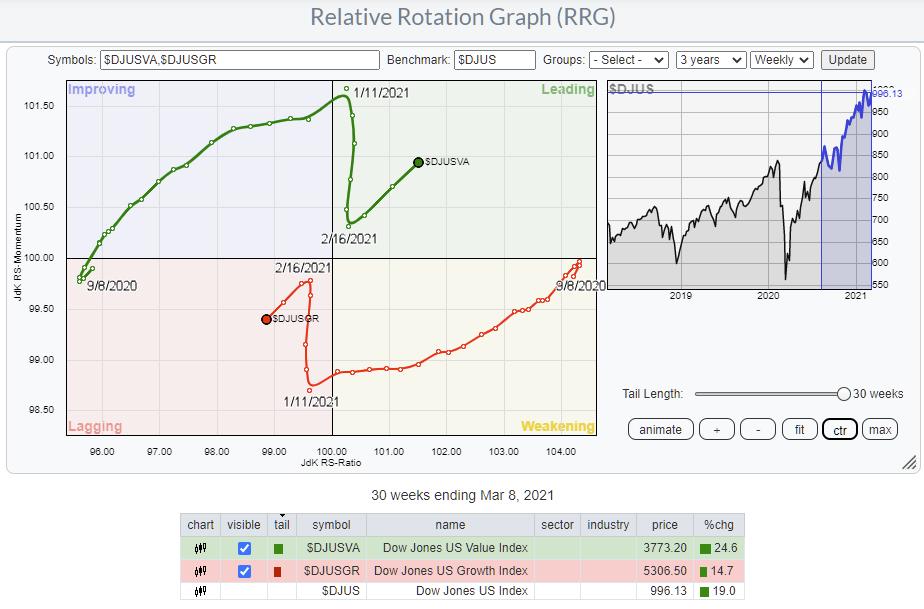 In the table below, you can see the massive difference in performance between these two indexes, +24.8% for Value and "only" +14.7% for Growth. This results in a +19% for the general market, the DJ US index.

The rotation moves smoothly in favor for Value from 9/8/20 to 1/11/21, and the the tails turn swiftly, moving higher/lower on the vertical (JdK RS-Momentum) scale but remaining stable on the horizontal (JdK RS-Ratio) axis. Then, around 2/16/21 the tails get back to their opposite rotations, NE for Value and SW for Growth.

On this weekly RRG, that looks like a counterclockwise rotation, but, as you may know, that is not the case. That rotation is just too fast for that weekly timeframe. When we switch the RRG to the daily timeframe, we can see that the rotation that played out in the expected rotational fashion around that date. 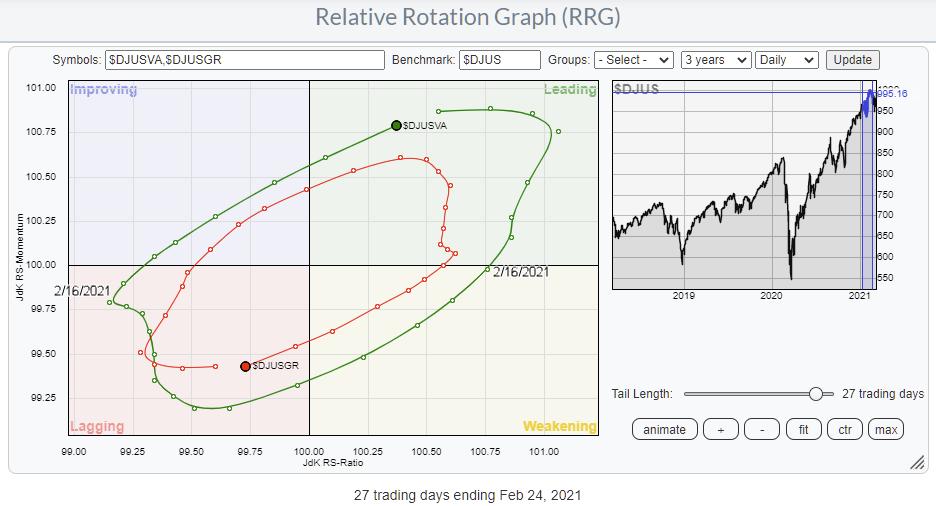 The "hook" on the weekly RRG signals a resumption of the (up)trend in value that already started when the tail crossed over into leading. Very often, such resumptions trace out from leading through weakening and then back into leading. 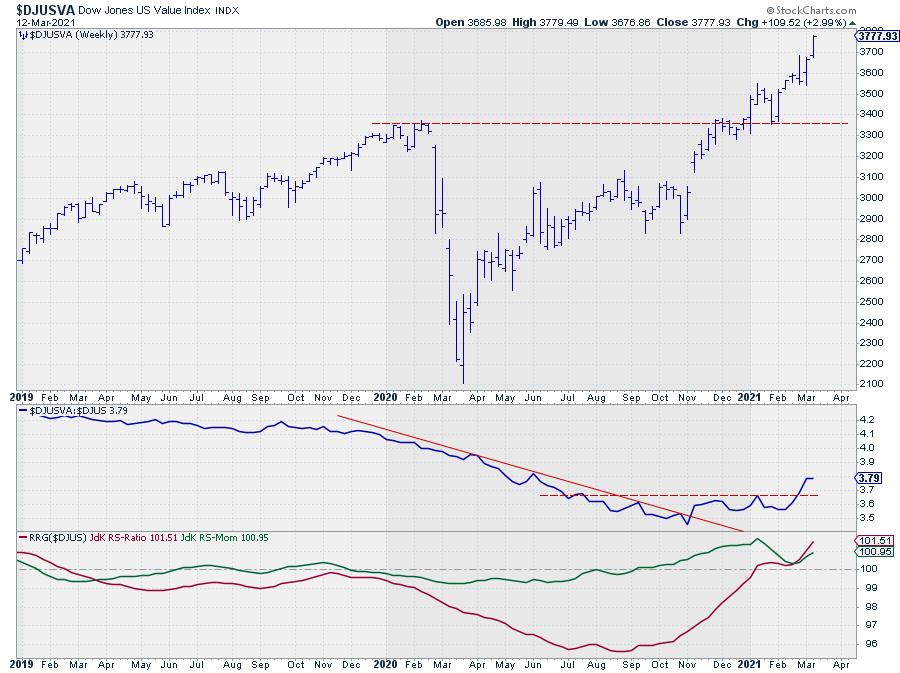 In this case, the rotation was so swift that the tail on the weekly RRG did not even make it into the weakening quadrant, but resumed its rotation further into the leading quadrant without leaving it.

On the chart above this shows as both RRG-Lines putting in a low above 100 and then starting to move higher. The bottoming out of the relative strength line is clearly visible, as it first broke the falling resistance line and then took out the newly build horizontal resistance. The series of higher highs and higher lows continuing higher after breaking to new all-time-highs earlier in the year confirms this strength.

Most of the time, these hooks or rotations on the right side of the graph are reliable signs for a continuation of the prior trend, i.e. Value over Growth. 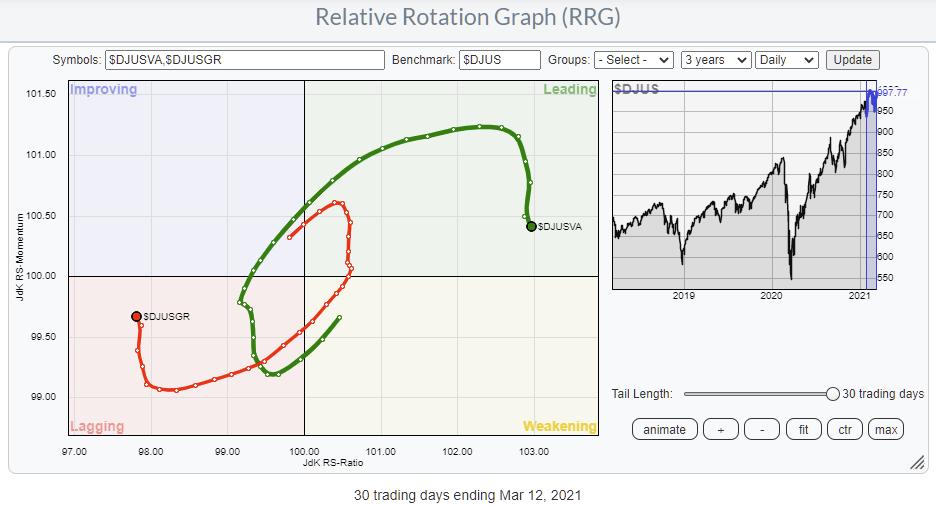 The daily RRG is updated to today and shows that the daily tails have started to roll over again. The loss of relative strength is minimal so far, which suggests that this is, again, a minor setback and just a pause in the prevailing longer trend.

If we bring that back to the current price chart, then this counter-trend rotation on the daily RRG could lead to a corrective move in the Value index -- and offer a new buying opportunity to jump on this train that is currently slowing down a bit, but still traveling in the right direction.

Below are some suggestions to play this relationship.

Of course, you can substitute IVE and IVW for ETFs of other suppliers that are tracking growth and value stocks.