The Cybersecurity ETF (CIBR) was hit with the rest of the tech sector over the last few weeks, but it held the March lows and is on my radar as a possible triangle forms over the last few months. In particular, I am watching the downswing within this triangle for early clues on a bullish reversal. First, note that the long-term trend is up because CIBR is above its rising 200-day SMA. Otherwise, I would not even consider a bullish setup.

The chart shows CIBR hitting new highs in February and then correcting with a trading range the last three months. With a lower high and possible higher low, a triangle could be taking shape. Note that a triangle within an uptrend represents a consolidation or bullish continuation pattern. CIBR was quite overbought after the prior 42% advance and this triangle worked off these overbought conditions. A break above the upper line would end the consolidation and signal a continuation of the bigger uptrend. 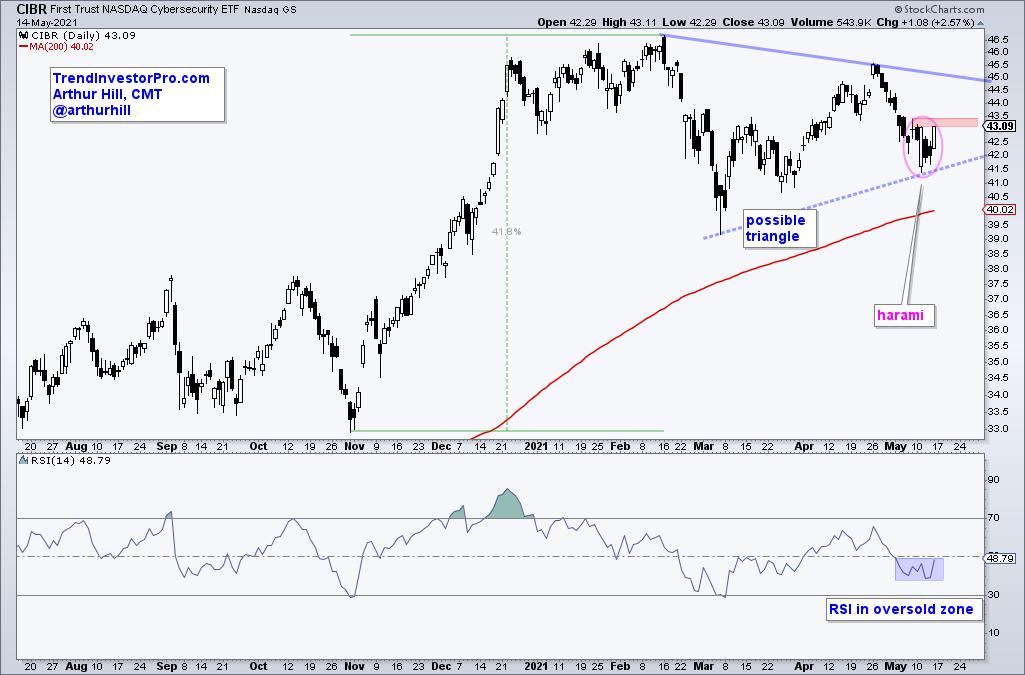 I do not want to wait for a triangle breakout so I am watching the swings within the triangle for a quicker jump. CIBR fell from late April to early May and the current swing is down. A harami formed on Tuesday-Wednesday with the long white candlestick and inside candle. After a few weeks of selling pressure, harami signal sudden indecision that can sometimes foreshadow a reversal. There was another inside candle on Thursday and a nice bounce on Friday. A break above 43.5 would fully reverse the downswing within the triangle and provide the first sign that a bigger breakout is in the making.

Covering over 200 names in our master ETF chartlist, TrendInvestorPro specializes in finding bullish setups within bigger uptrends. This week we are looking at the Airline ETF, two China ETFs and a few others setting up. Click here for immediate access to our reports, videos and ETF ranking table.