This crazy world has so many unique twists and turns. The turn that absolutely baffles me is the move to green energy without the planning. Not just in one country, but worldwide.

President Biden suggested America would buy all the copper offshore rather than start new mines in America. But the planning isn't being done in the rest of the world either. The new IEA report might just be the most amazing politically-produced report, highlighting how vast the incompetence is of governments for the lack of broad planning before cancelling oil. But the report recommends cancelling oil immediately, knowing no replacement for that energy exists using electric power in any sort of time frame.

From a website I read that writes about all things energy, it takes on average 16 years to get a copper mine approved and into production in the world today. We want to be well on our way to green energy having completed the transition in 2050. 2021 + 16 = 2037. That gives us 13 short years before 2050 if we started approving mines today. But we want to have all electric cars by 2035 in some states.

I learned from a reader of my work, that transmission lines are aluminum, not copper due to weight. He mentioned the supply of aluminum is also under pressure. If there is little hope for new energy transmission lines on a massive scale due to NIMBY (not in my back yard), and the aluminum required is under pressure, how does this work out? The massive shortage of copper for building out electric cars, creating larger home wiring capacity demands for charging begs the question - what will people do? In the next 15 years, as we stop the production of liquid energy, but we haven't filled out the infrastructure of electric, the bottleneck will be immense.

We saw the 4-day drought of gasoline in a few states caused by the cyber attack on the Colonial pipeline. Laws got instantly changed to allow other means of moving the oil. It took mere days to react to a shortage. Amazingly it is reactive for something so important. The Texas power outages were another example. How will this energy system, urged to dramatically undersupply liquid energy while dealing with a shortage of electric energy, create a conversion to electric without an immediate boost to new copper supply? How will it play out through 2025, then 2030, then 2035 before we see a meaningful increase in Copper supply?

We saw the 4-day drought of gasoline in a few states caused by the cyber attack on the Colonial pipeline. Laws were instantly changes to allow other means of moving the oil. It took mere days to react to a shortage. Amazingly, it is reactive for something so important. The Texas power outages were another example. How will this energy system, urged to dramatically undersupply liquid energy, while dealing with a shortage of electric energy, create a conversion to electric without an immediate boost to new copper supply? How will it play out through 2025, then 2030, then 2035 before we see a meaningful increase in Copper supply?

From the EIA reports this week (the next six charts are from EIA.gov):

It would appear we have an average supply of crude oil, remembering that last year we had huge amounts of crude in storage but no demand. The height of the top part of the grey area was influenced by last year's economic stoppage globally, where oil in storage surged to new highs. Remember how oil went to zero because there was no place to store it? So it would appear that we have abundance because we aren't on the south edge yet. That couldn't be more wrong. We are declining our inventory heading into the peak gasoline driving season. Globally, inventories are dropping quite quickly. We are currently 5% below the 5-year average.

The next chart is gasoline supply. We are at the bottom of the five-year range and getting tighter on supply.

Gasoline demand? The blue line shows us returning to normal and still increasing. We have states that have not opened back up yet, like California, as a small example. Gasoline demand is 3% above the 5-year average.

For distillate - read this as diesel fuel, home heating oil, jet fuel for simplicity - we are near 5-year lows and plummeting for supply.

We are at the top of the range for distillate demand. I have seen other charts that suggest we are higher than the 5-year high for demand at this time of year. Distillate demand is 13% above the 5-year average.

The refineries are going full blast at 87% trying to keep up, which is within 1% of the 5-year average. Congress has passed a law against countries holding back oil. But Congress itself is stopping oil flowing. US production used to be near 12.5 million barrels/day. It is down by at least 15% and closer to 20% from the prior highs.

You can start making a list of people who helped the world get into this shortage of energy, both liquid and electric. When there is an inquiry, they will be hiding. Wars have always been fought over lack of energy supply. During wars, many times it is the break in the supply chain that helps win the war.

Company after company is warning of supply shortages coming, but no one wants to hear it. Goldman Sachs, JPM, BAC and many others warn of critical supply shortages approaching over the next 18 months.

A new report from another bank titled their review of the IEA report "The Dangers of Fantasy Island". They comment that soaring crude oil prices are what the governments and environmentalists want to see. The bizarre aspect is why the leadership of government is not going all out, and from my view - ALL OUT - to make the transition to energy through copper a massive priority? This is economically fundamental and the traditional role of government.

The oil majors have stopped planning new projects. Exxon's board just had new members appointed who want to stop XOM from producing oil. Shell just got a ruling in the courts to change their business impossibly within 8.5 years. Who will invest in replacing the energy reserves depleting at 100 million barrels per day with a backdrop like that?

Be careful what we wish for. We saw how people were affected by shutting down the world due to the coronavirus. We have more violence on airlines than ever before by restricting liberties. Creating long-term energy shortages is not going to end well for governments or civilians without a major boost in immediate planning.

As oil moves above $67 to multi-year highs, it's about to get a lot more valuable. 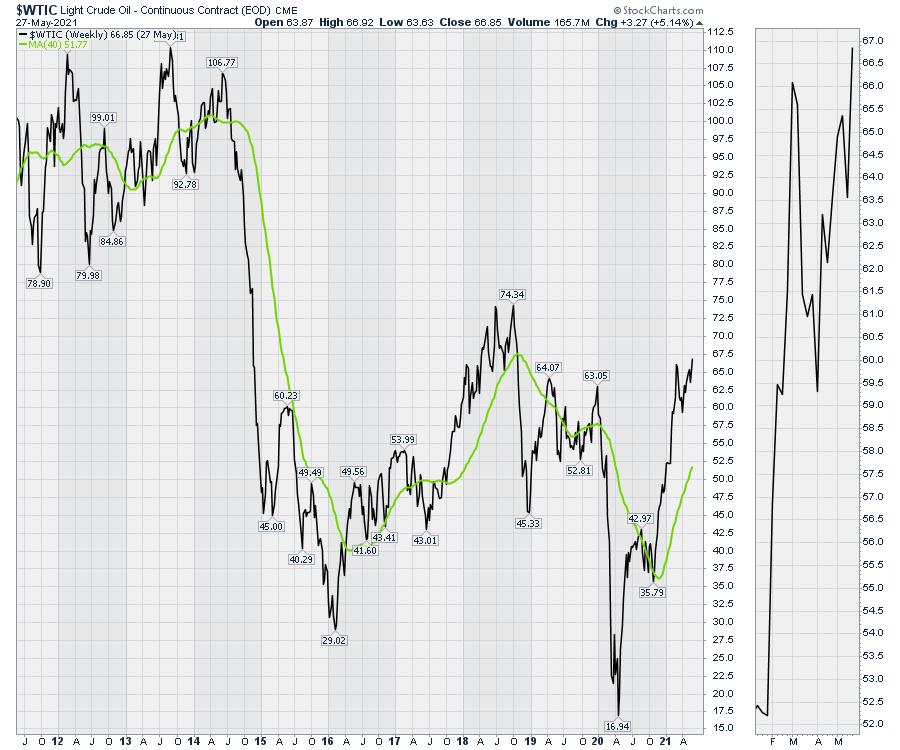