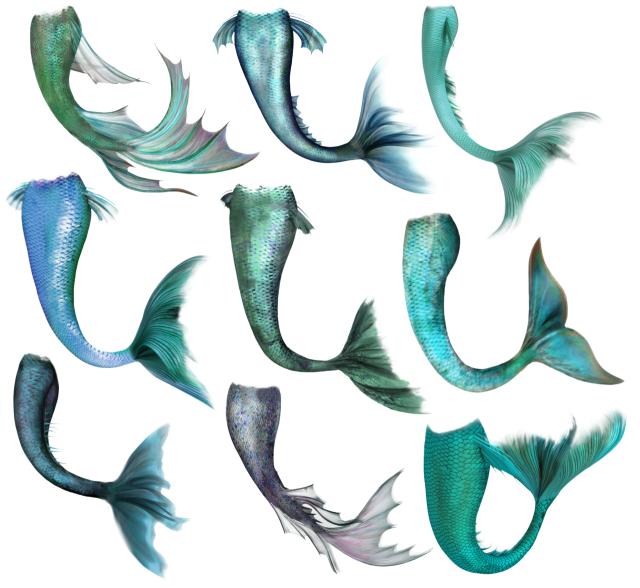 One of the main characteristics of a Relative Rotation Graph is the "tail," which shows us the sector's trajectory through recent history.

Tails illustrate how the security ended up in the position where it currently is, helping us to view current rotations and create a big picture/high-level overview of how all elements in the universe are behaving against the benchmark and each other. But that tail in itself holds a lot more information that we can use when analyzing/interpreting a Relative Rotation Graph. 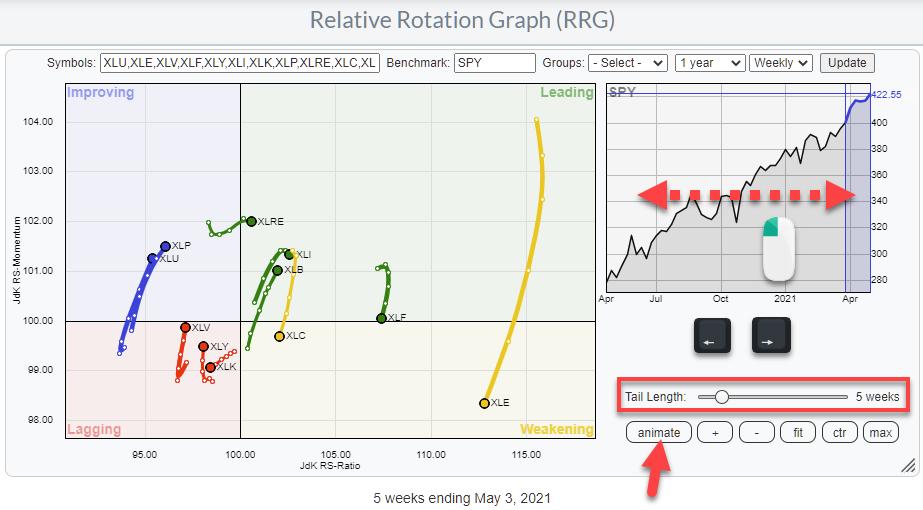 The "Tail length" setting determines the number of historical observations. In the chart above, it is at five weeks. Changing the tail length by dragging the slider only makes more or fewer data points visible; it does not impact the position of those data points. It is NOT a variable, a lookback period, a parameter, etc. 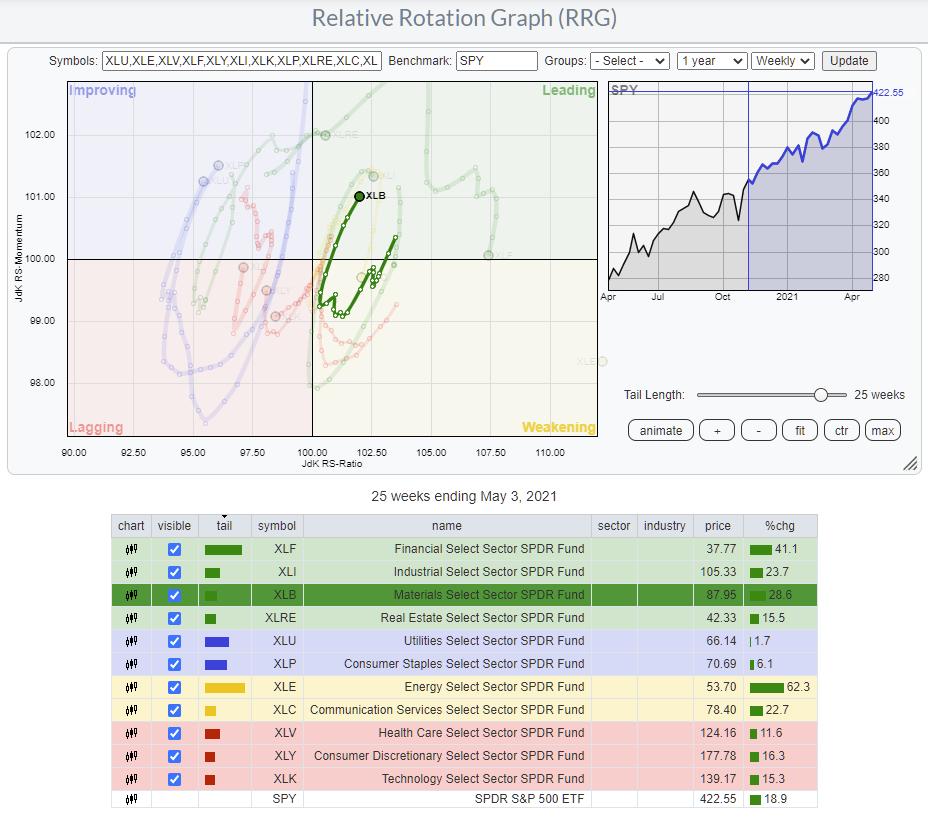 Another handy feature is the possibility of "highlighting" a tail on the RRG.

When you click on a line in the table below the graph, that security will be highlighted while all others are dimmed. This makes the selected security stand out clearly and allows you to study the rotation better.

As you can see, this also allows us to use longer tail lengths without the chart becoming unreadable. 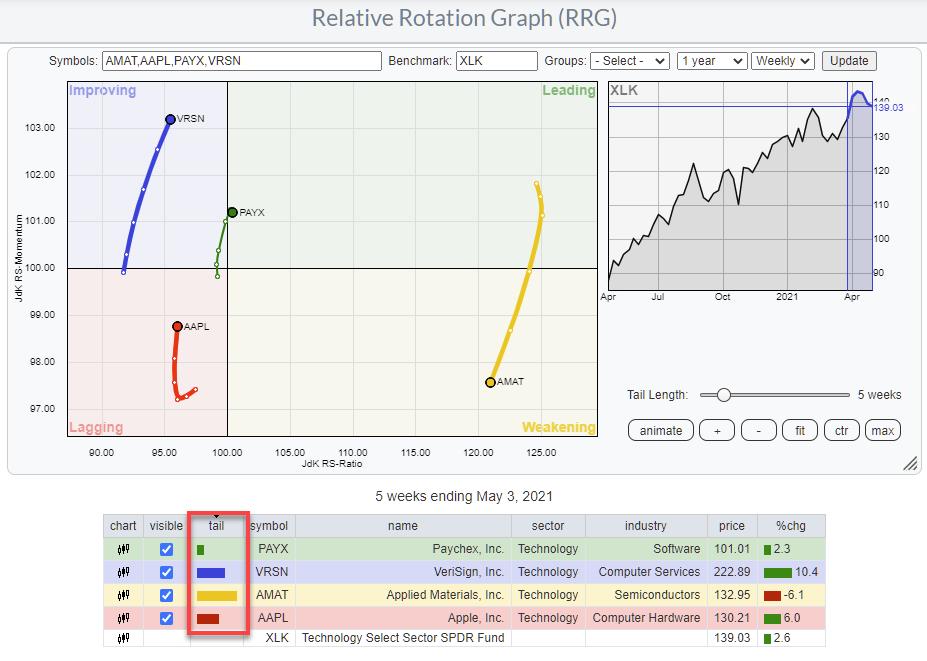 If you watch closely, you may have noticed that the thickness of the tails is not always the same. The further away from the benchmark a tail, or better the last observation on a tail, is, the thicker the tail will be drawn.

In general, securities that are moving or have moved far away from the benchmark have higher odds of turning around, mean-reverting, and therefore offer bigger opportunities to capture alpha vs. the benchmark. 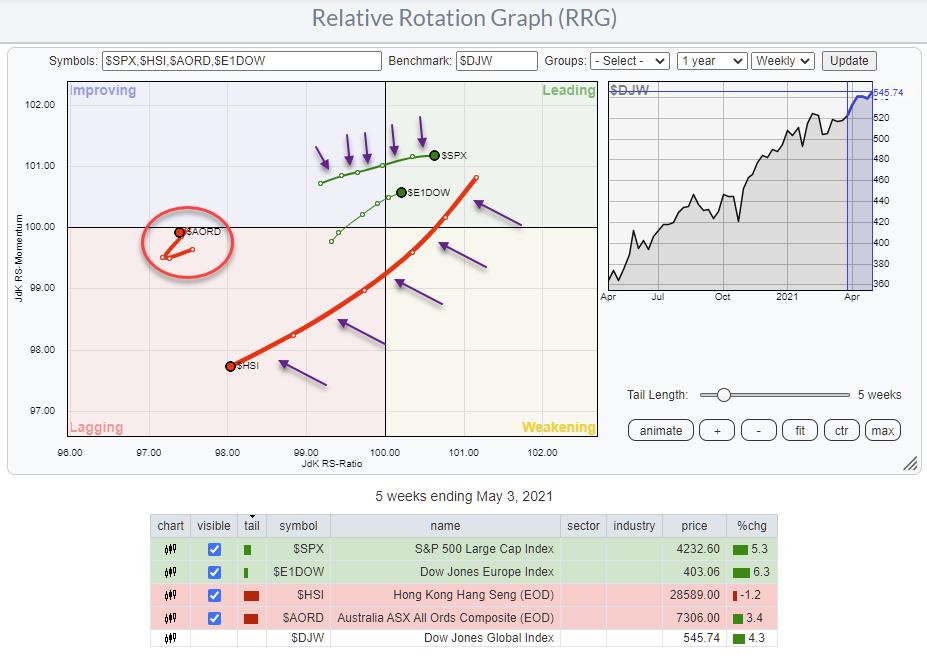 On the RRG above, the tail-length setting is at four weeks. So all four stock market indexes show four weeks of the historical rotation. But we can immediately see that the length of the tail for $HSI is much longer than the tail for $AORD.

The (in this case) five-week tail shows five weekly segments (six data points). The distance between two observations is called the RRG-Velocity. The sum of RRG-Velocity values over several periods gives the length of the tail on the graph. A long tail signals a strong move; it shows that there is momentum or power behind the move. A short tail, on the other hand, signals a stable trend. 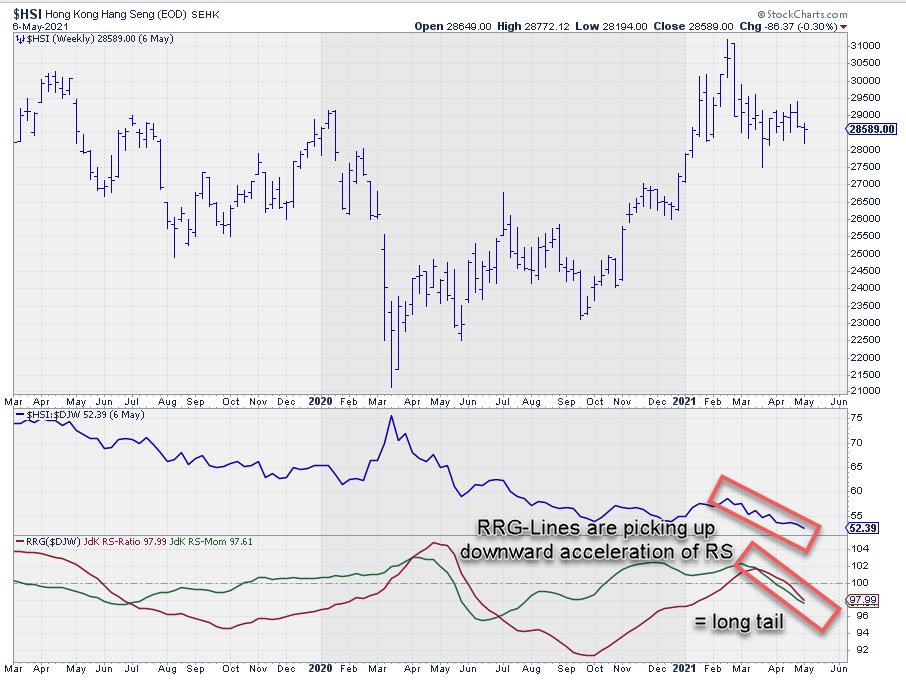 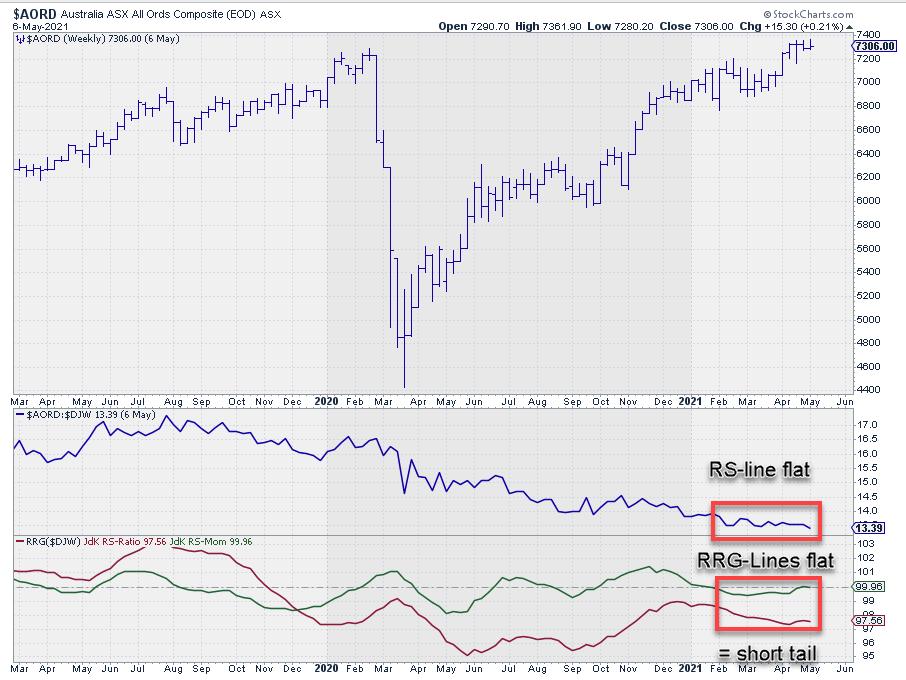 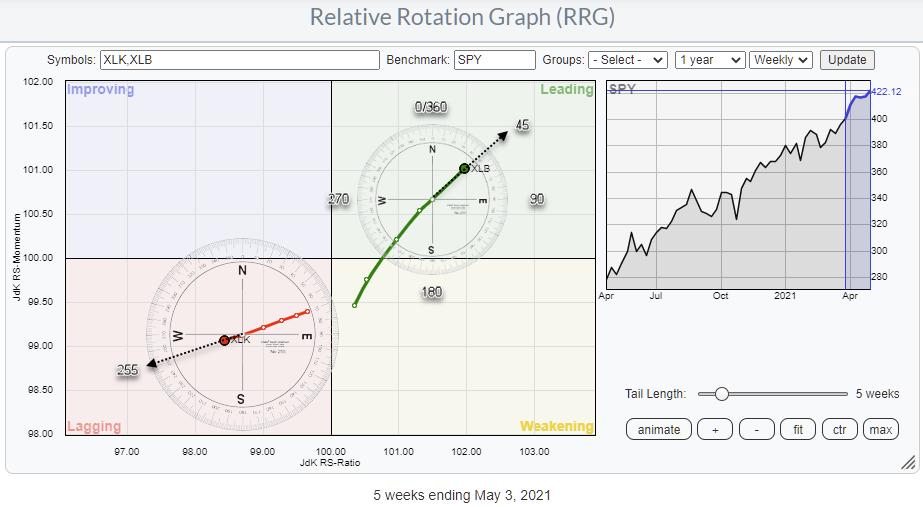 On the RRG above, you see two tails; XLB inside the leading quadrant and XLK inside the lagging quadrant. On the XLB tail, I have positioned the compass with its center on the previous observation. Drawing an imaginary line from the center of the compass through the last observation of the tail gives the heading at the intersection with the compass. In this case, it is near 45 degrees. On the XLK tail, the Heading is around 255 degrees.

We have learned that an RRG-heading between 0-90 degrees, in general, is positive and leads to further strength, while headings between 180-270 degrees are a sign of weakness and generally lead to more weakness in the periods ahead. This is conceptually also easy to understand. A heading between 0-90 degrees means that the security is gaining on both axes, while the opposite is true when the heading is between 180-270.

The fact that tails can turn and start moving at or turning into another heading in any of the four quadrants is one of the unique features of Relative Rotation Graphs, which highlights turnaround situations in a very early stage which are very hard or impossible to detect on a regular chart.

If you would like a more visual and animated explanation, please check out the 4/20/21 episode of Sector Spotlight, in which I discuss "The Tale of the Tails."

The Tale of the Tails

My regular blog is the RRG Charts blog. If you would like to receive a notification when a new article is published, "Subscribe" with your email address.