The Regional Bank ETF (KRE) and the 10-yr Treasury Yield are positively correlated and the recent surge in the 10-yr yield led to a breakout in the Regional Bank ETF. More importantly, this breakout signals an end to a corrective period and a resumption of the bigger uptrend. As noted last week, signs of rotation are appearing again.

The chart below shows $TNX (top window) and KRE rising from October to March and falling from March to July. These directional movements show that they are positively correlated. The correction in $TNX returned to battle the RISING 200-day SMA and retraced just over 50% of the prior advance. According to Charles Dow, secondary price moves (corrections) within primary uptrends retrace between one-third and two-thirds of the prior advance. Fifty percent is right in the middle and marks the base case. This week's surge is the first sign that the correction is ending and the bigger uptrend is resuming. A follow-through break above the late July high would complete the reversal with a higher high. 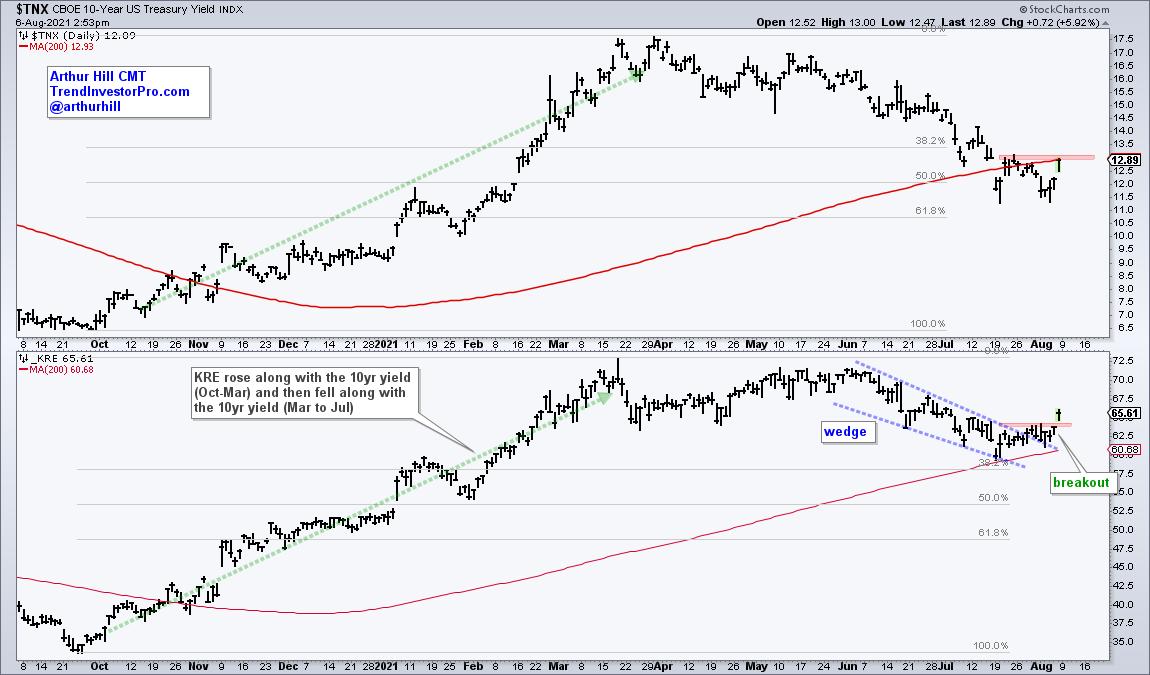 The lower window shows KRE doubling with a surge to new highs in March. Such a move deserves a correction and KRE fell back to the rising 200-day SMA. This decline retraced around 38% of the prior advance and formed a falling wedge. The price pattern and retracement amount are also typical for corrections within bigger uptrends. KRE reversed this decline with a strong move the last two days and this breakout argues for a challenge to the March-June highs.

As the name suggests, TrendInvestorPro specializes in trend identification and finding short-term bullish setups within the bigger uptrend. We constantly monitor a core ETF list with over 120 names and regularly update trend signals. Click here to take your analysis to the next level!