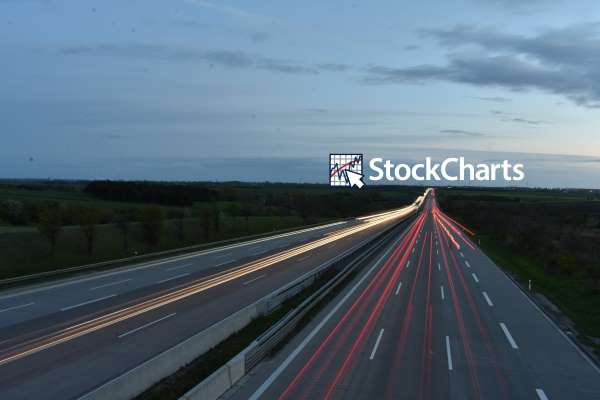 This month marks exactly seven years ago that I started contributing to the StockCharts website, after Relative Rotation Graphs were added to the graphical toolbox in July 2014.

As the number of eyeballs on RRGs, the blog and the weekly episodes of Sector Spotlight has grown substantially over these years, I thought it would be cool to recycle an updated version of my very first blog article, describing how Relative Rotation Graphs made their way to the StockCharts platform.

I am pretty sure that many of today's readers may have missed that introduction and the backstory. So here is an updated version!

As of last Saturday (19 July, 2014), StockCharts.com has launched Relative Rotation Graphs as part of their web-based charting services.

The past few months here at RRG Research, we have been working hard with the StockCharts.com staff to implement Relative Rotation Graphs in their web-based charting service. And, I must say, we're very impressed with their professionalism. They have created a very nice web-based version of RRG. All this hard work has now led to the official launch of RRGs on StockCharts.com. Needless to say, it's something we're very proud of.

As you may know, RRGs have been available on the Bloomberg terminal since January 2011 and on Thomson Reuters EIKON (now Refinitive) terminals since late 2013. Market Analyst International (now Optuma Software) has also been offering an RRG toolbox as an add-on for their Market Analyst v7 software since early 2013.

Hence, RRGs were only available on professional systems and a high-end technical analysis software package..... that is, until now!

The relationship with StockCharts.com goes back to 2009. In November of that year, I presented Relative Rotation Graphs for the first time at a major conference, the annual IFTA conference in Chicago.

In the room was Greg Morris, someone I only knew from his books until then, he approached me after my talk and told me: "this was the first time in 25 years someone actually showed me something 'new.'" (Editor's Note: That sounds like something Greg would say.) When we found out that, besides a passion for technical analysis we also shared a military/air force background, the day was too short and the bar did not carry enough bottles of beer for us.

At some stage, Greg asked me what I wanted to do with RRG. I told him I was already talking to Bloomberg for them to have RRGs on their professional terminal, but that I would be very interested to be introduced to StockCharts.com to get the tool on a service like theirs. Before I was back in Amsterdam, Greg had connected me with Chip Anderson, the President of StockCharts.com.

Following that introduction, Chip and I started to chat about having RRG on the SCC platform. In hindsight, that discussion was probably too early. RRGs were still "too rough" at the time and not very well known yet.

Remember, they would only be introduced on the Bloomberg platform two years later in 2011. After our initial conversations, I stayed in touch with Chip, who proved to be a valuable resource, and I learned a lot about servicing retail clients and web-based charting platforms.

The basic message he gave me was "It's a great tool, but it needs (much) more recognition and visibility before I can do anything with it on StockCharts.com." Wise words indeed. You can only "introduce" something once... and it has to be done properly right from the bat.

From San Francisco to New York

Our connection was then renewed during the 2013 IFTA conference in San Francisco, where Trevor Neil and I sat down with Chip again. Trevor is my partner in RRG Research and is based in London, UK.

At that stage, we already started to receive messages from visitors to our website - www.relativerotationgraphs.com - saying things like "please make RRGs available via sites like StockCharts.com." By the way, that website is now getting really old, and we are working on a new version which I hope will be released in the next few months. From November 2013 until April 2014, we stayed in touch discussing our potential cooperation, which was then sealed with a handshake and finalized during the MTA symposium in New York.

From May to July, we worked together on the implementation. That period was nothing but professional "fun" and it resulted in a very good-looking and, more importantly, a very functional implementation of Relative Rotation Graphs on the platform.

For me, it's always fun to work with programmers and see how they implement certain things slightly different than others, but most of all how they can get carried away thinking of all the "stuff" they can do based on the RRG concept. Pete Behmer, the programmer in charge of RRG on SCC, was no different, and Chip told me he had to slow Pete down a few times because "otherwise we would still be coding up all kinds of cool functionality and not have a product out for the users."

Since then, I have met with Pete in the (old) StockCharts office in Redmond and I can totally understand Chip's words.

Ready for Launch in July

In the second week of July 2014, Chip declared RRG ready for launch and, subsequently, the first version of the tool was introduced for StockCharts users on Saturday, 19 July 2014. And, reading from the first reactions, I think we can call it a success. I hope that the RRG tool on SCC will be picked up by its users like it is picked up on the other platforms where RRG is available.

As regulars will know and can attest to, I love to get feedback and learn from it or help you to get your questions answered. So please continue to feel free to put up any questions or discussions in the forums or comment on any (blog) post or video. And I will continue to personally answer them.

I am pretty sure I have not answered every email that came in, but after a quick look in my mailbox and doing some rough calculations, I think that, over in the past seven years, I have received and answered somewhere around 4000 emails, comments, etc. following 283 blog articles and 93 episodes of Sector Spotlight. I am looking forward to the next 4000 messages ;)

If you have not seen RRG on the StockCharts platform yet, you can check it out here.

Shortly after the introduction, we wrote an RRG section in ChartSchool, which you can find here, as well as a support article here describing the different functionalities of the RRG implementation.

The first sketches for RRG in ACP are ready and some initial Proof of Concept coding is underway. There is no timeline yet, but a newer and, very likely, upgraded version of RRG will certainly make its way to ACP in the future. So please stay tuned and stay in touch.