The S&P 500 is still holding up inside the boundaries of its rising channel, but the market is nervous, which resulted in a VIX reading above 30. That hasn't happened since February.

Nervous markets, or rather their participants, usually mean that people start checking out defensive sectors. The Consumer Staples Sector is one of these defensive sectors and, in this article, I want to take a look at the rotation of the various groups that are part of that index.

The Relative Rotation Graph above shows the rotation of these groups against the S&P 500 ($SPX). What can we learn from this chart?

First of all, all groups, but one, are positioned on the left side of the chart, indicating a relative downtrend. 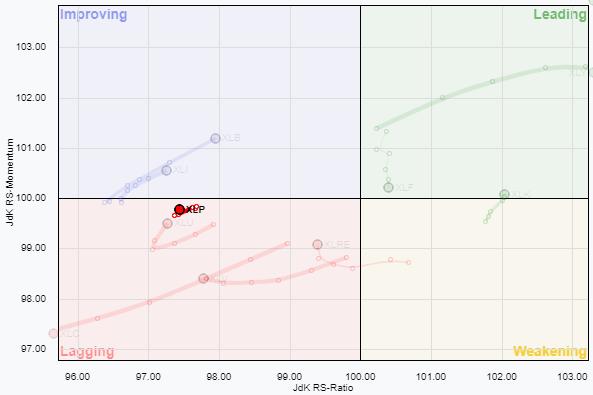 With the sector index, XLP, positioned inside the lagging quadrant just below 100 on the JdK RS-Momentum axis, it is not surprising to also find the majority of the groups on the left side of the chart. And, just like XLP, most of these groups have short tails, which indicates that they are in stable relative downtrends.

But that does not go for all groups. In the RRG at the top, I have highlighted a few groups that have long tails and/or are in interesting positions on the RRG.

First of all, the only group inside the leading quadrant is the Food Retailers and Wholesalers Index ($DJUSFD). 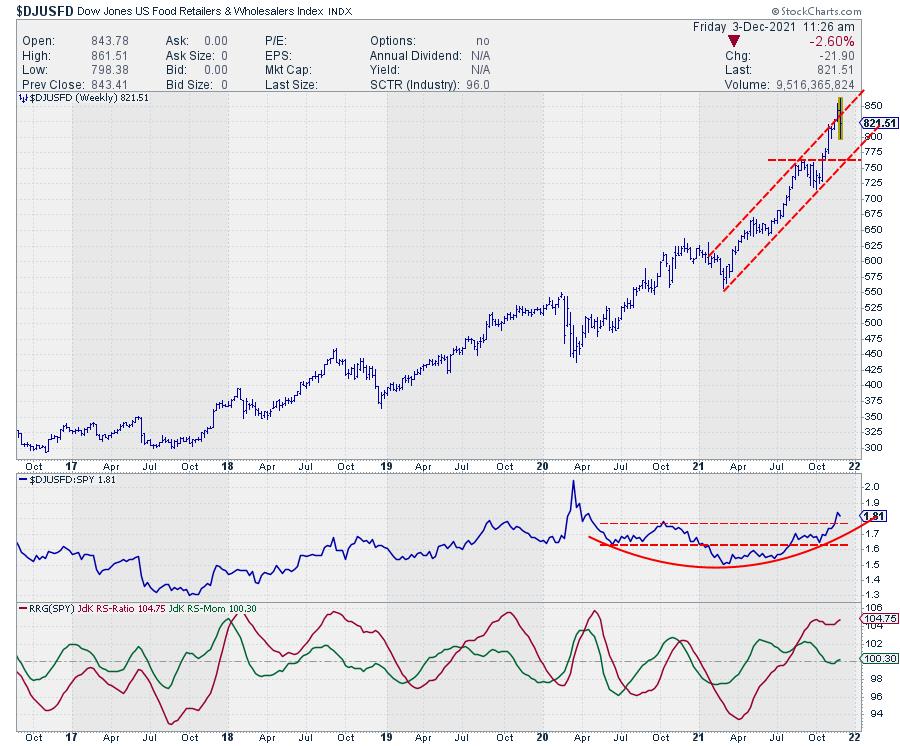 This group is in a nice rising channel and briefly managed to break above the upper boundary, but is falling back into the channel this week. Usually, that means a further drop to the bottom of the channel, which means that there is some short-term risk for this index.

The relative strength chart, however, is showing a big rounding bottom that continues to move higher, and the resulting RRG-Lines seem to be bottoming, which is positive. This is causing the tail on the RRG to rotate back up towards and into leading from weakening, which marks a new up-leg within an already rising relative trend. This makes the Food Retailers & Wholesalers Index the strongest group inside Consumer Staples. 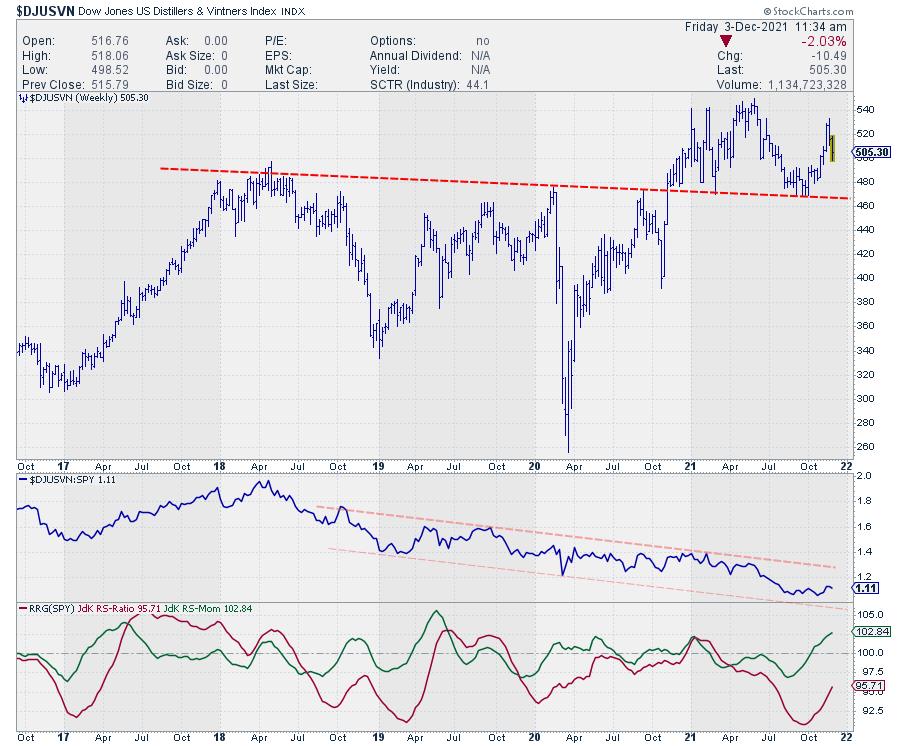 This group broke above major resistance at the end of 2020, with a follow-through rally that peaked in June and then tested the old resistance area as support. Out of that recent low, the group has started to pick up again.

From a relative strength perspective, the improvement is in the very early stages, if there is any improvement at all. The long-term relative downtrend, which started at the start of 2018, is still in play, but recently the RS-Line started to flatten, causing the RRG-Lines to improve and send the tail into the improving quadrant.

We need to wait and see how far this improvement can continue but, in the near term, there is quite a bit of room towards the upper boundary of that falling channel. If the price chart can hold up above that old breakout level and continue its improvement, then more gains for relative strength can follow. 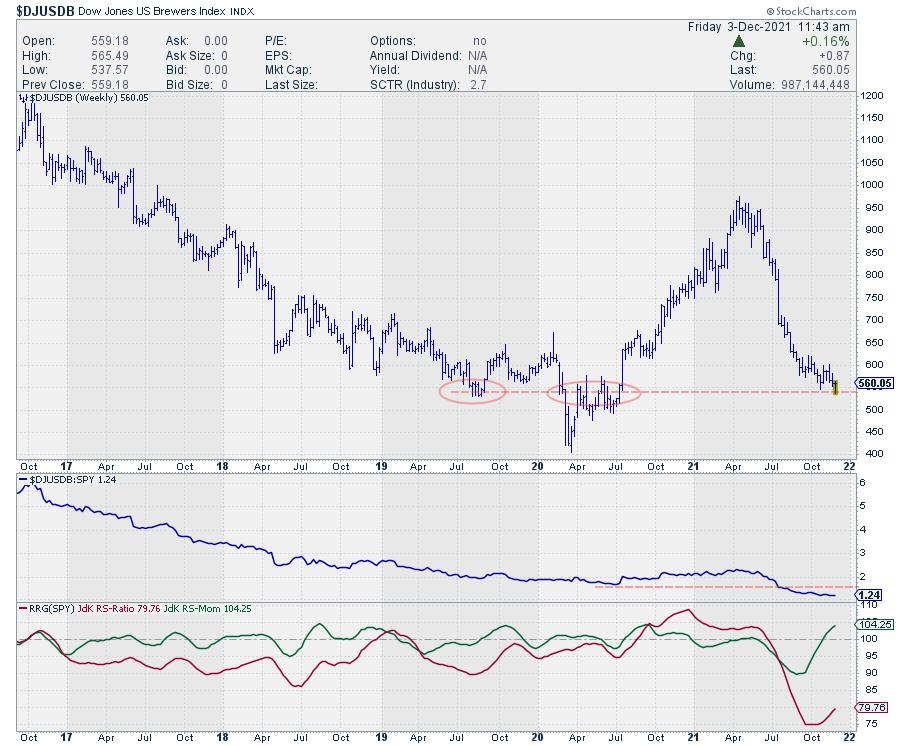 Brewers is a very small group. Within the S&P 1500, there are only two stocks classified in this group, which are SAM and TAP.

After a strong rally from early 2020 to April 2021, the index dropped back just as fast and is now trading around H1-2020 levels. The improvement in relative strength, and therefore the rotation into the improving quadrant, is the result of a slowdown in the decline of relative strength. This means that there still is a good amount of risk for this tail to roll over within the improving quadrant and come down to lagging before entering the leading quadrant. For this group, just like Distillers & Vintners, there is a bit more risk involved for long positions.

Given the fact that Distillers & Vintners are quite a bit higher on the RS-Ratio scale, that makes them the preferred group over Brewers, at least in the near term. 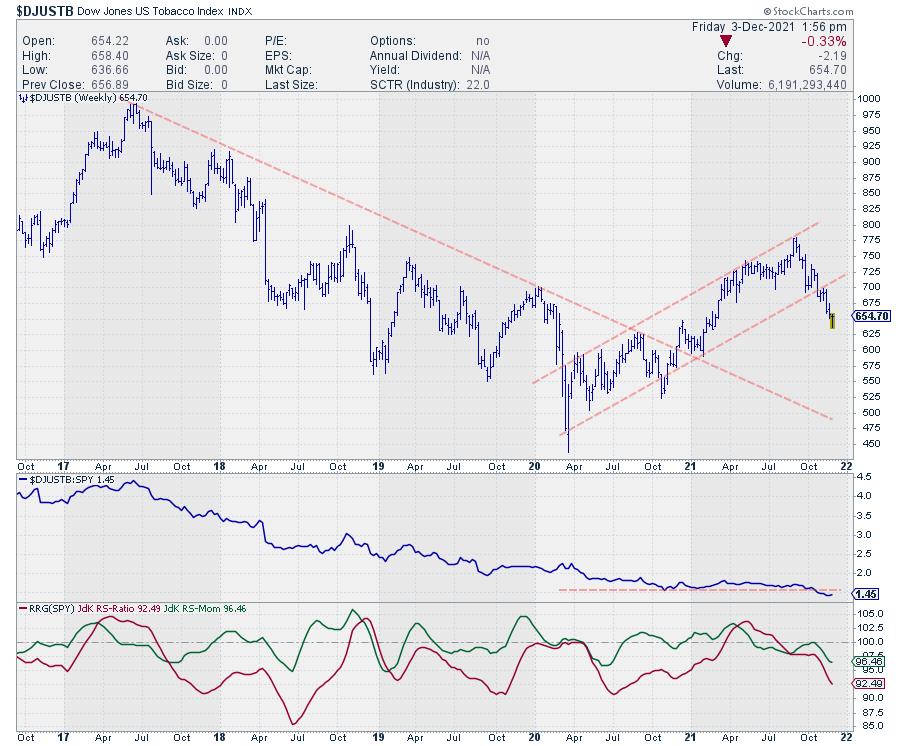 On the price chart above, we can see that price broke out of a rising trend (channel) a few weeks ago and is still continuing lower. Relative strength also broke lower after a period of sideways movement, causing an acceleration lower that is pushing the RRG-Lines lower and the tail deeper into the lagging quadrant.

The Consumer Staples Sector is still in a relative downtrend vs. SPY, but we know people start looking at defensive stocks when markets get nervous. Within the Staples Sector, the group Food Retailers and Wholesalers is the strongest while Distillers & Vintners, along with Brewers, could offer (short term) opportunities inside the improving quadrant. Tobacco is best avoided as it continues deeper into the lagging quadrant.

So it looks as if Americans are buying food and booze, but no cigarettes.