On Friday the SPY 20EMA crossed up through the 50EMA, generating an Intermediate-Term Trend Model (ITTM) BUY signal for the broad market (SPY). Does this mean that I will have to reconsider my assumption that we are in a bear market? Well, I can hardly avoid it, but I still have some reservations. 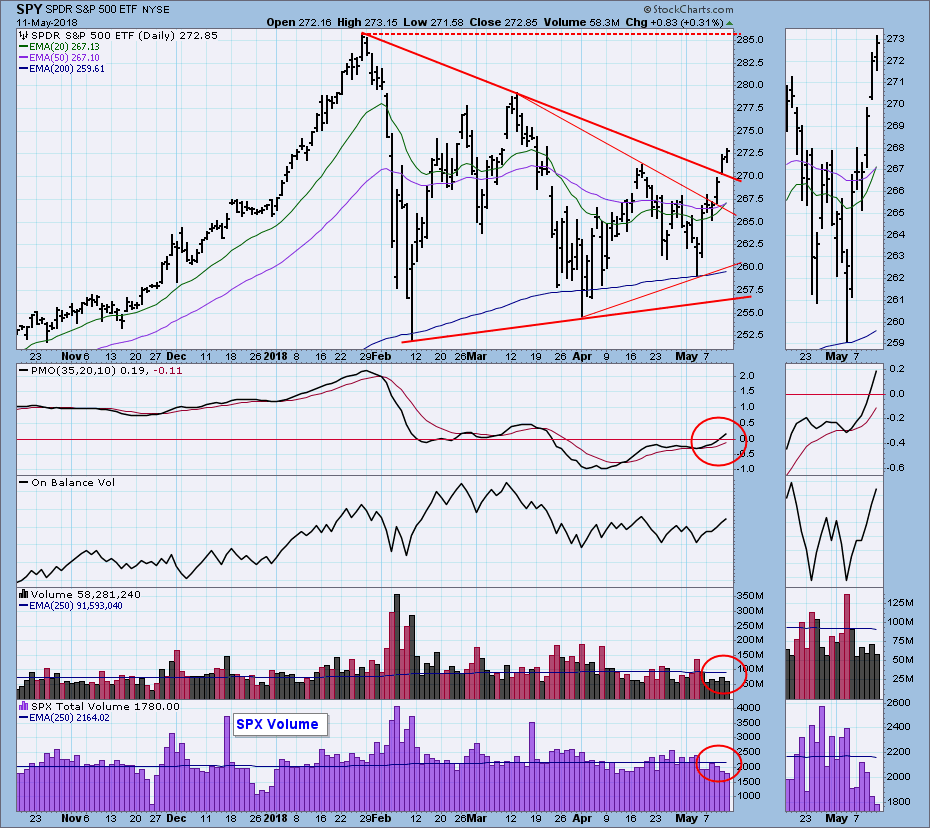 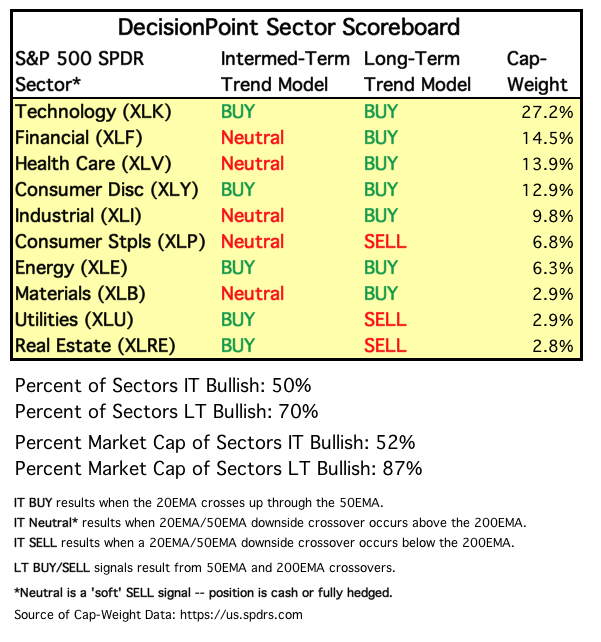 SPY Daily Chart: Something about this week's breakout feels familiar, and I don't have to look back too far to find a time when I had similar feelings. Note on the chart below I have put a red arrow next to the big breakout move in March. I remember vividly how at the time I thought, incorrectly, that the bull was back, so I can't help but feel we may be in a similar situation now. Volume on this week's advance was a little thin, but let's look at our other indicators. 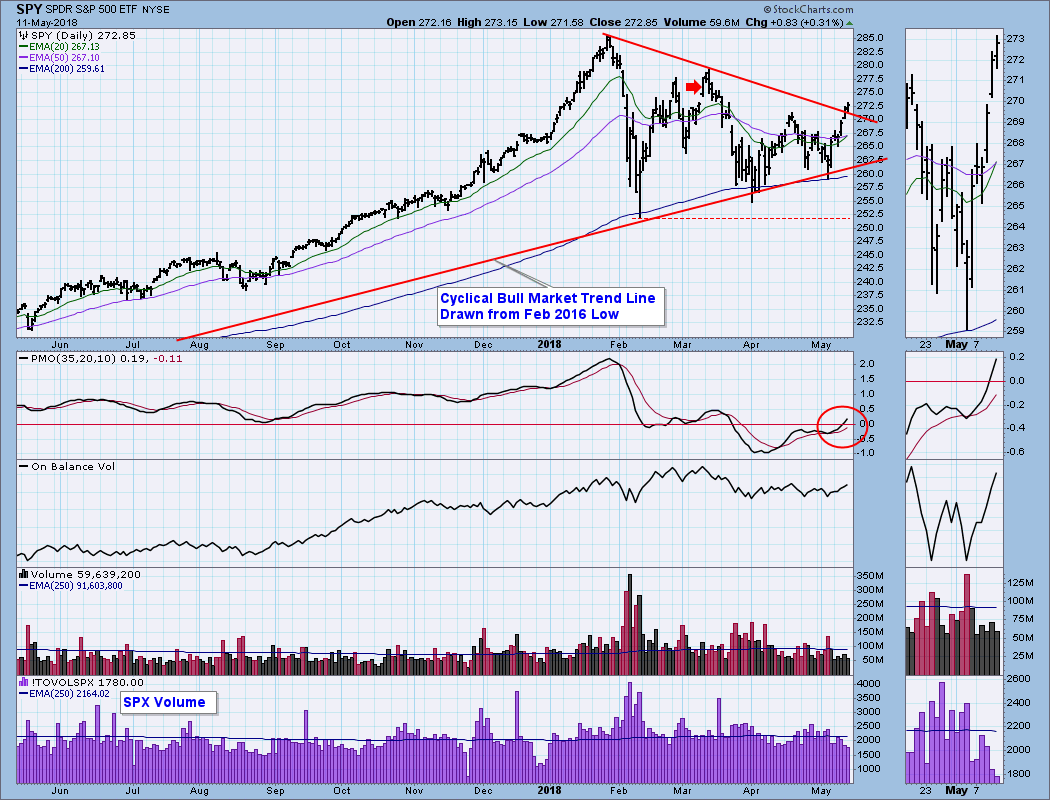 SPY Weekly Chart: SPY is very positive in this time frame. The weekly PMO has bottomed, price has broken above a declining tops line, and the 17EMA remains above the 43EMA (it never made a downside crossover). And the bull market rising trend channel remains intact. 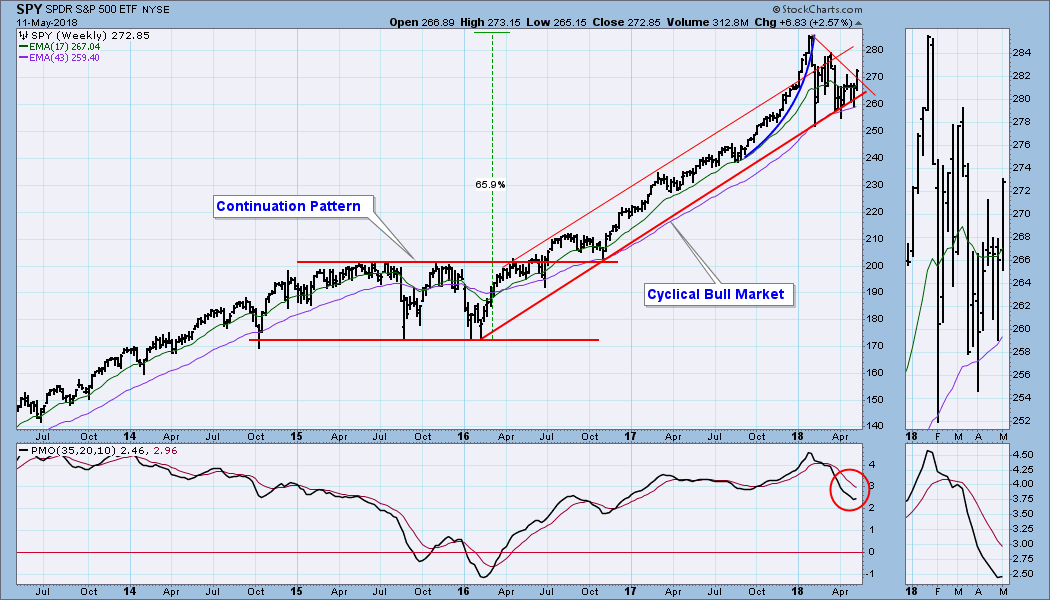 Short-Term Market Indicators: The STO-B and STO-V are oversold and about to top. In bull market conditions it is possible for prices to advance, even while these indicators top and decline, but it needs to be a very strong bull market. At this point, I think we should expect a short-term decline when the indicators begin to unwind. 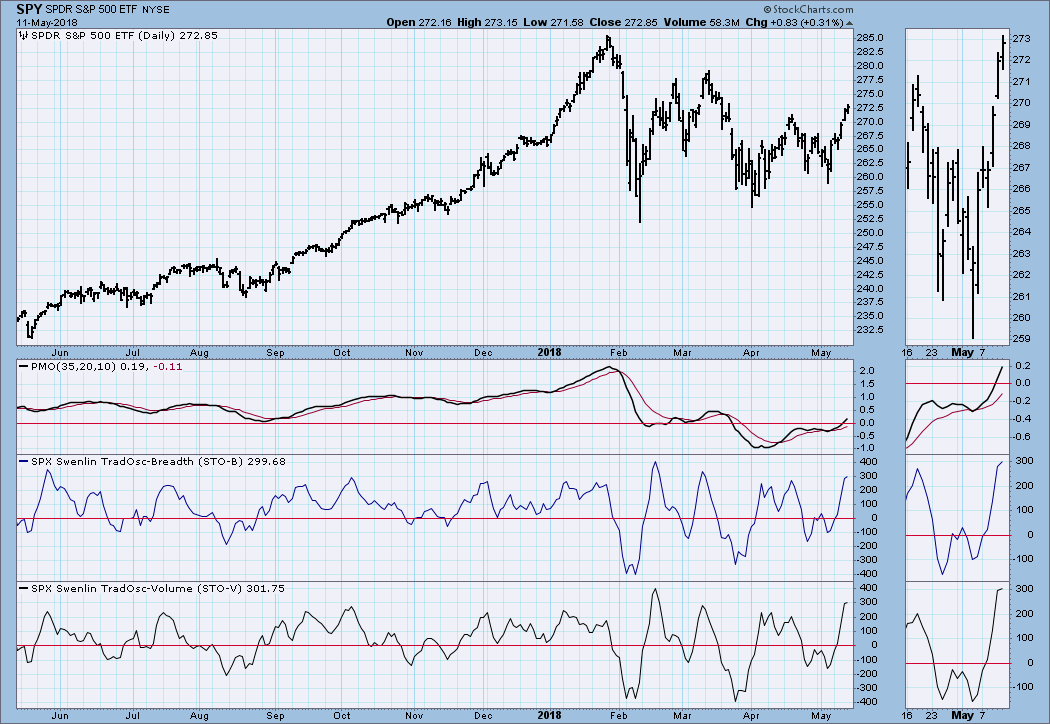 Intermediate-Term Market Indicators: Since their bottoming last week, the ITBM, ITVM and PMO are moving up strongly, and they have a long way to go before becoming overbought. 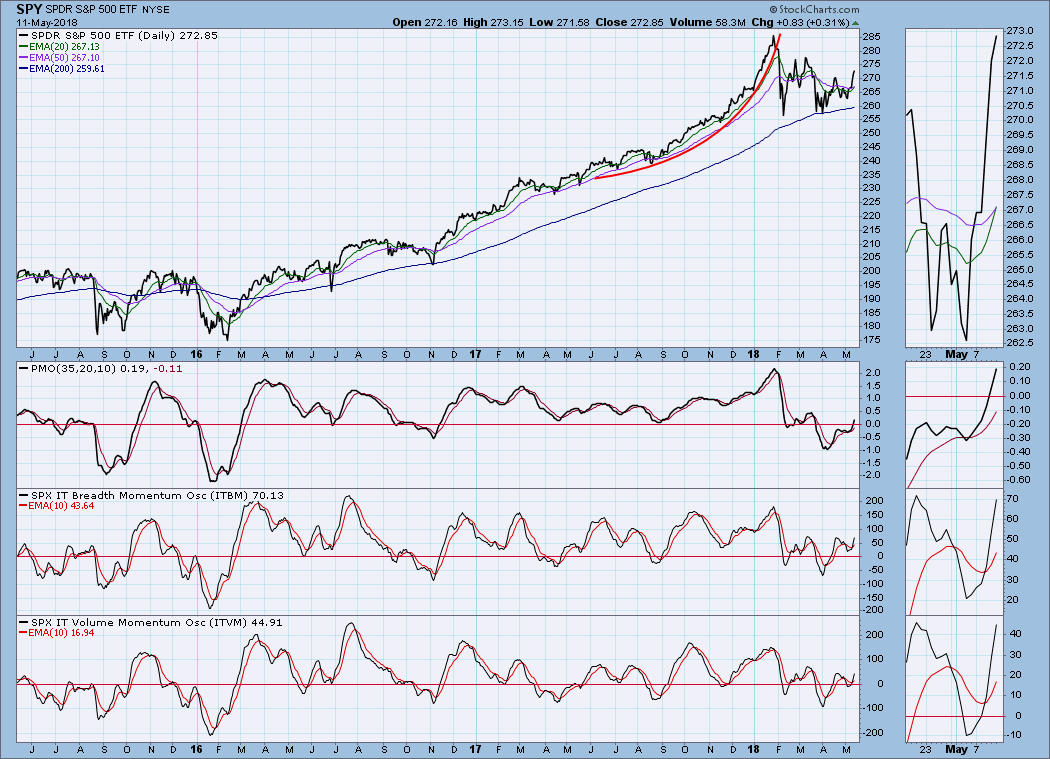 Conclusion: To review, I thought that the breakdown of the parabolic in January had set us on a path into a bear market; however, this week's 20/50EMA upside crossover kind of obviates any assertion that we are in a bear market. While it seems we have traversed a correction, and it may not be over, the bear market triggers we traditionally rely upon have failed to appear. I should emphasize that an ITTM BUY signal in an information signal, not an action signal. The market climate has turned favorable, but buying the breakout may not be the best course of action, particularly when the short-term indicators are telling us to look for a decline in that time frame.

UUP Daily Chart: The UUP price and daily PMO topped this week. Both are overbought, so we're beginning a short-term correction. 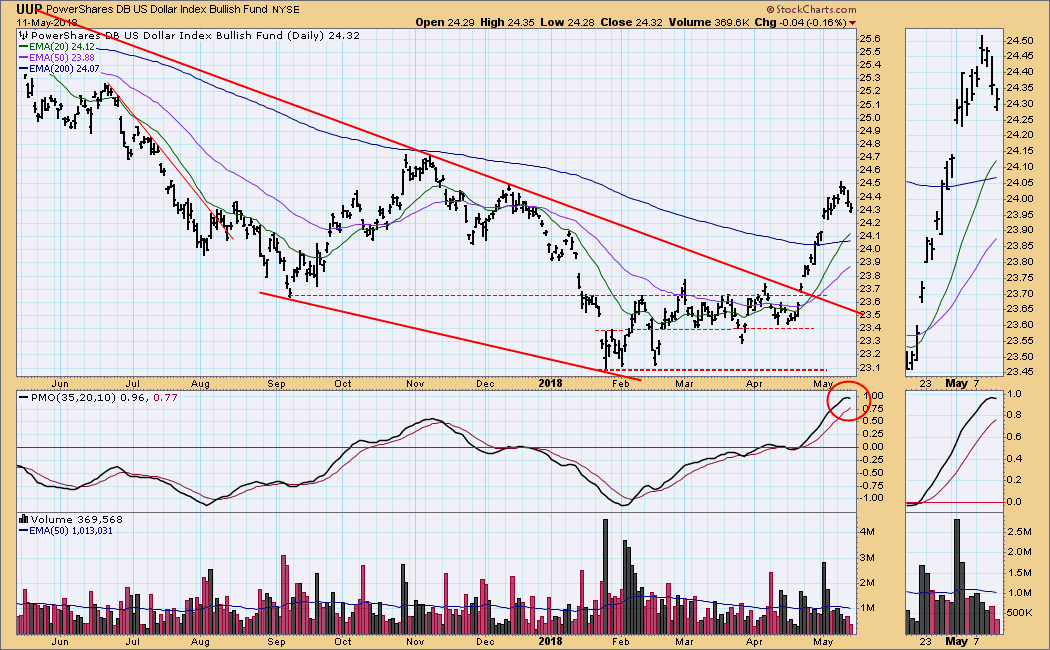 UUP Weekly Chart: A strong breakout from the large falling wedge formation, and a rising weekly PMO implies a positive outlook in this time frame, but let's see what kind of pullback we get. 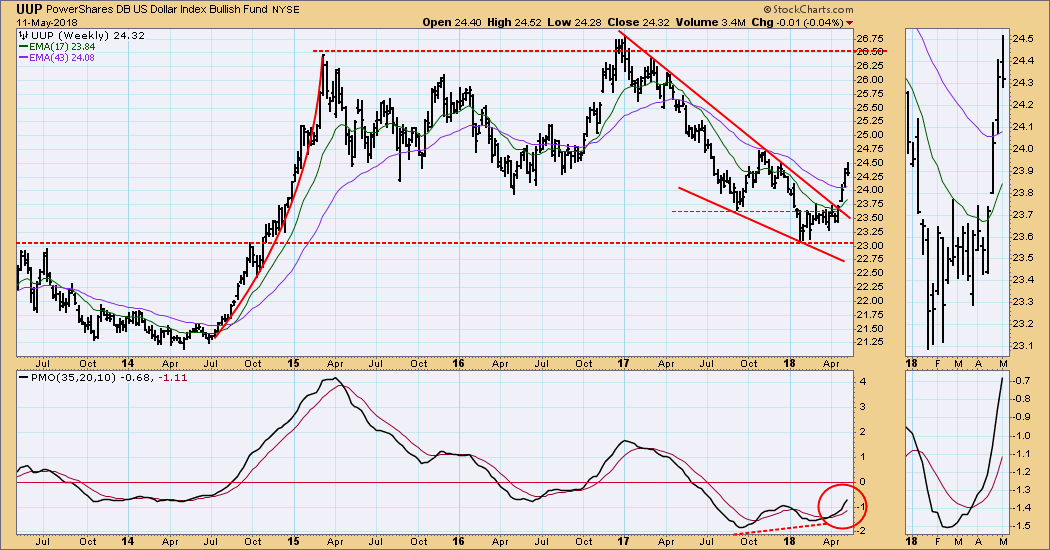 GOLD Daily Chart: Gold has bounced off a horizontal support line, which also coincides with the 200EMA, and it appears that a price bottom has been put in. This is confirmed by the daily PMO, which has also bottomed. 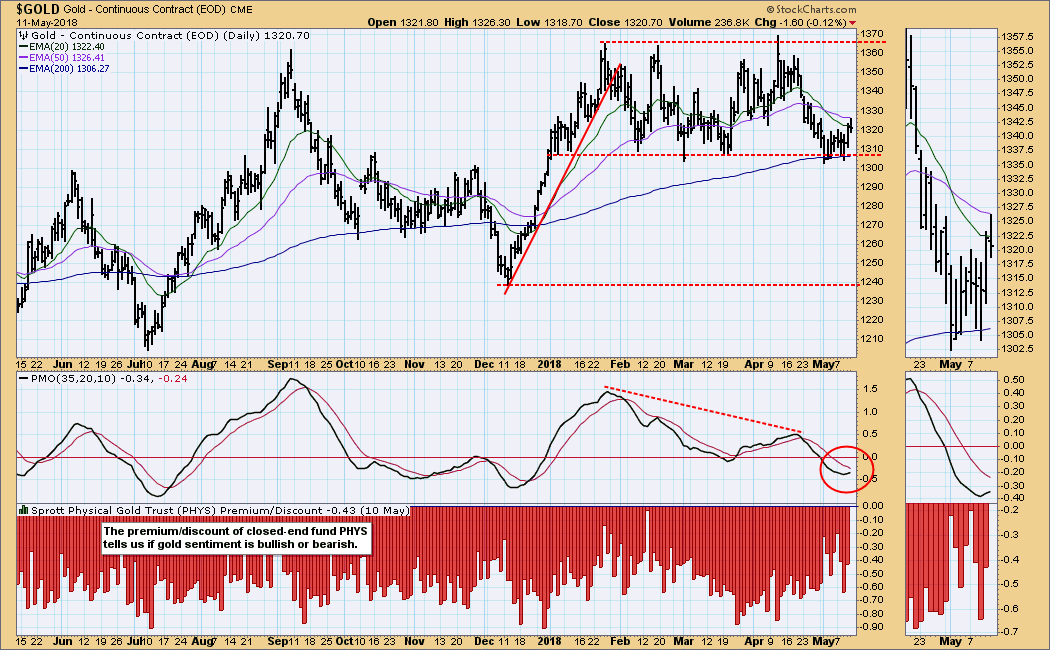 GOLD Weekly Chart: The weekly PMO has been running flat for about a year. The fact that the PMO is above the zero line reflects the moderately positive condition of the long-term price trend. I have often referred to the rising trend from the late-2016 low as being 'tortured.' Unfortunately, the term still applies. I should mention that the magnification of thumbnail charts of tends to exaggerate moves. In the case of the weekly PMO, I urge you to concentrate on the full chart to view it in proper context. 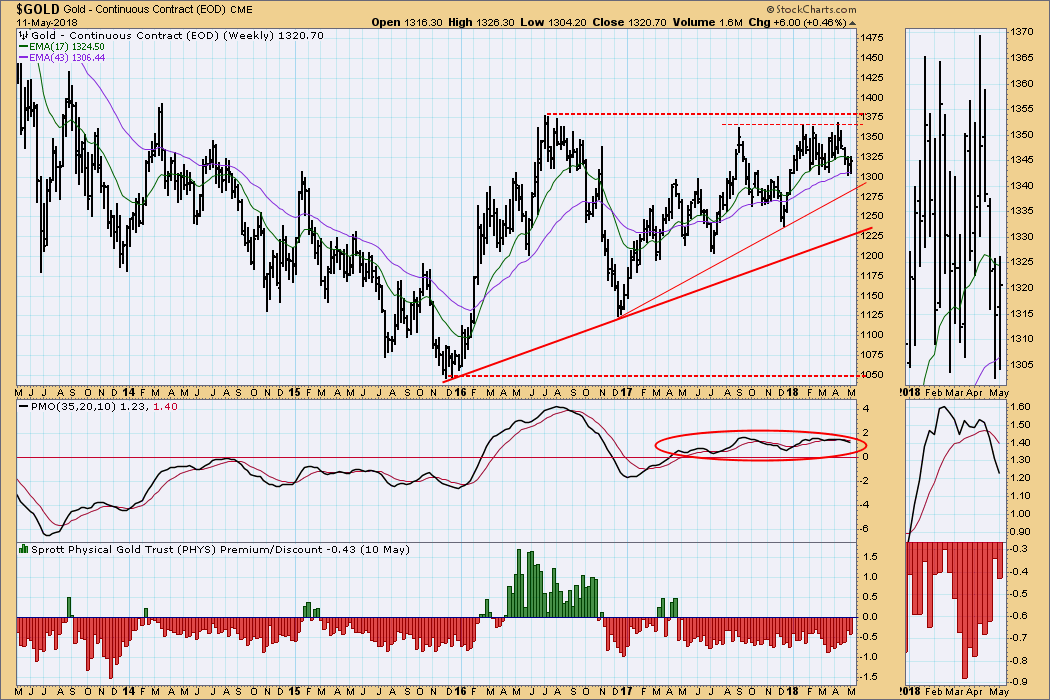 USO Daily Chart: Crude finished the week higher, but not without some turbulence on Tuesday. There was a sharp pullback that tested the rising trend line, but it had recovered by the end of the day. Nevertheless, we got a second top, across which we are able to draw the top of a rising wedge pattern. This pattern usually resolves downward, but it currently seems to be fighting that tendency. 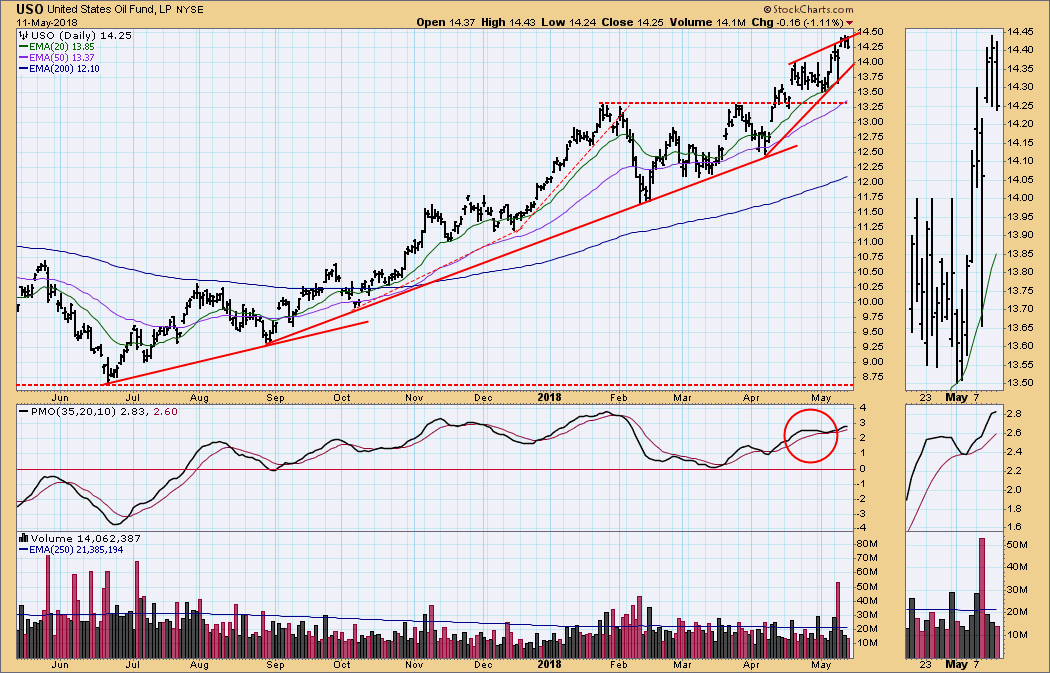 USO Weekly Chart: The next most prominent resistance for USO is at about 16.00, which translates to about $78/bbl for crude. The fully executed 2016/2017 double bottom has strong long-term bullish implications. We're hearing targets for crude of $100/bbl, but let's wait to see how we feel about it when/if crude gets to $78/bbl. 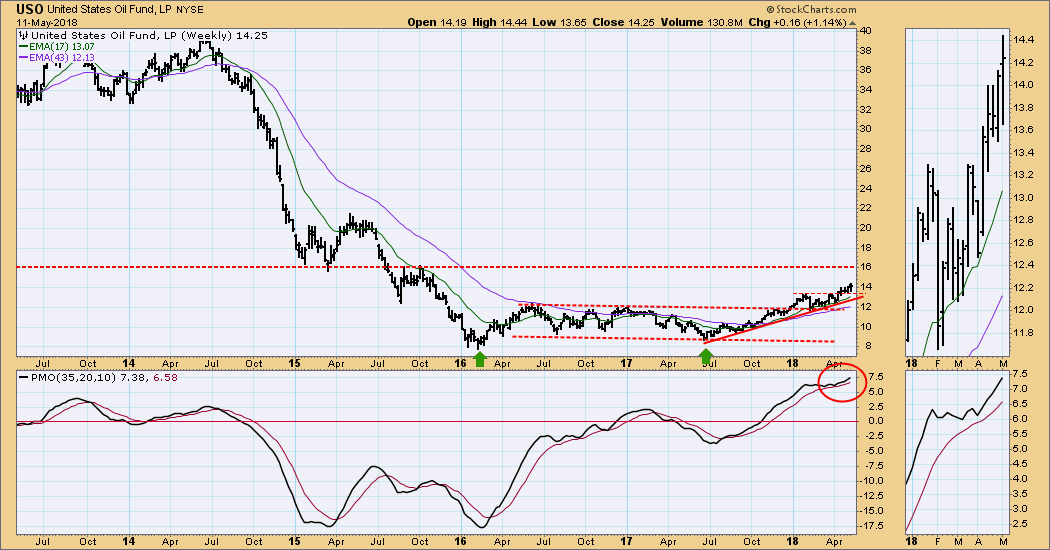 TLT Daily Chart: After April's dramatic breakdown, TLT has recovered a lot of the loss, but price has been stalled for about two weeks. Since TLT is in a bear market, a negative outcome is most likely. 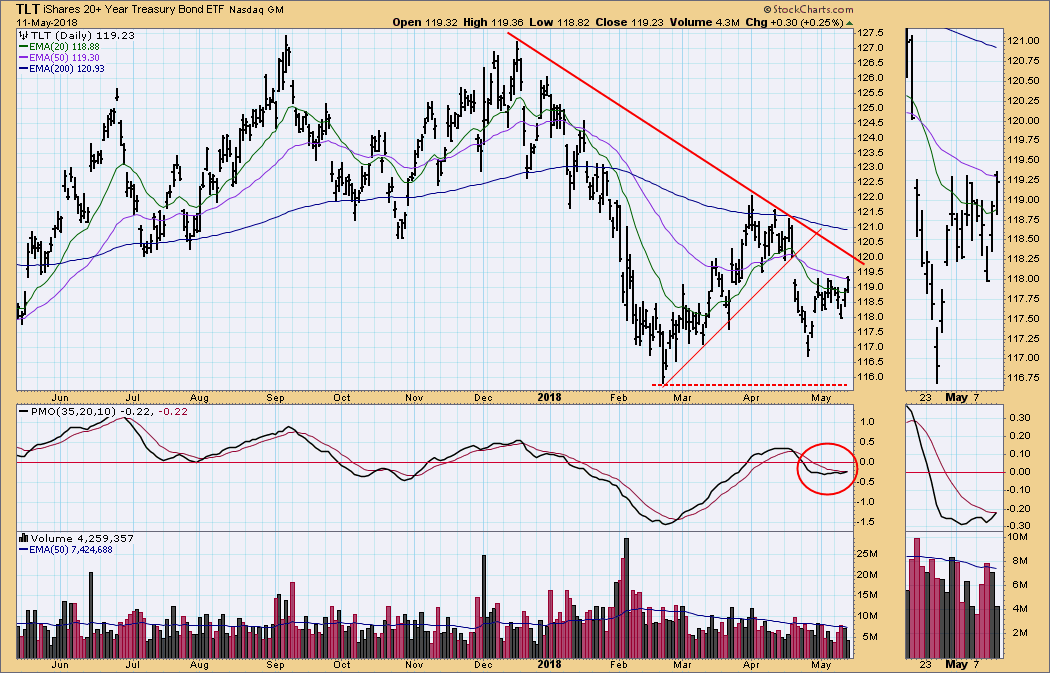 TLT Weekly Chart: The head and shoulders pattern persists, and price is bouncing along just above the support of the neckline. If the pattern 'executes,' (violates the neckline), the minimum downside target would be about 90.00. 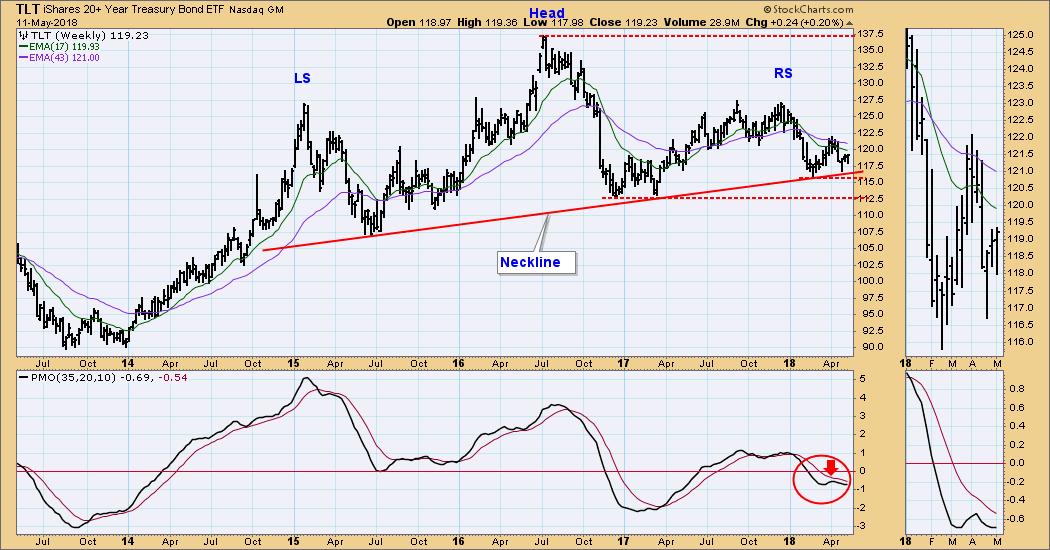