Recently I received an email asking about when to invest in foreign market ETF's.

I had discussed the $USD might not be heading lower on my Commodities Countdown and on the Canadian Technician video recordings. Now in fact it might be reversing and start heading higher which would be a headwind for US investors in foreign market tracking ETF's.

That just goes contrary to all the news about a new US Dollar bear market as seen on all the major business news channels.

Below is a chart with four panels:

While there are many choices to do that through ETF's, the $USD direction has to be one of your main decisions for choosing the right ETF. I have used a percentage scale in chart 1 so you can see the percentage gains in the German market and the ETF in the hedged version.

Panel 2: In order to get the same gains or losses as a European investor in Euros, the hedged ETF in panel 2 would closely match the performance in any market direction.

Conversely, as the $USD is rising and you still want to invest in a foreign market, you'll want to use a hedged ETF in Panel 2 to remove the currency risk. 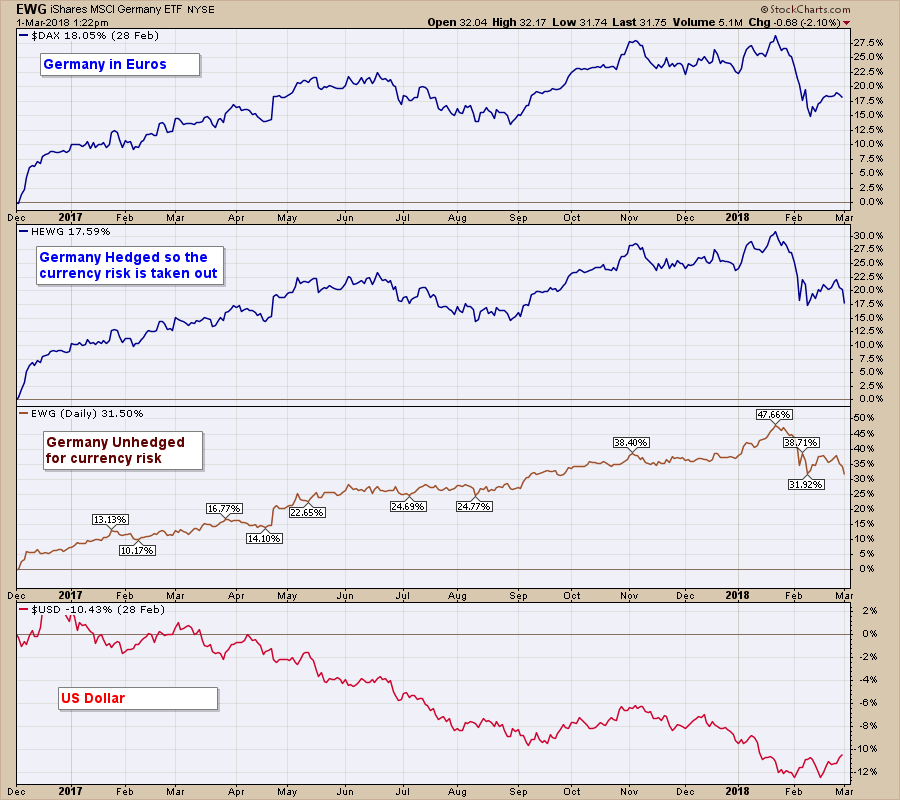 Hopefully that helps explain when to use hedged ETF's in foreign markets. You may wish to add a bookmark for this article so you can find it later as trends in the market reverse. All of these charts can be clicked on to get current updates any time in the future.

Note: The chart below uses actual price of each ticker symbol, not the percentage gain or loss as in chart 1 so the charts will look slightly different.

There are multiple ways to show relative strength in the hedged vs. unhedged ETF. A quick one is to compare them straight away using the ratio tool shown in panel 3 as a bar chart or panel 4 as a line chart below. When rising, the first ticker symbol is outperforming the second one in the ratio. The scale on the ratio tool is not that helpful. It is the direction of the trend that you want to be aware of. 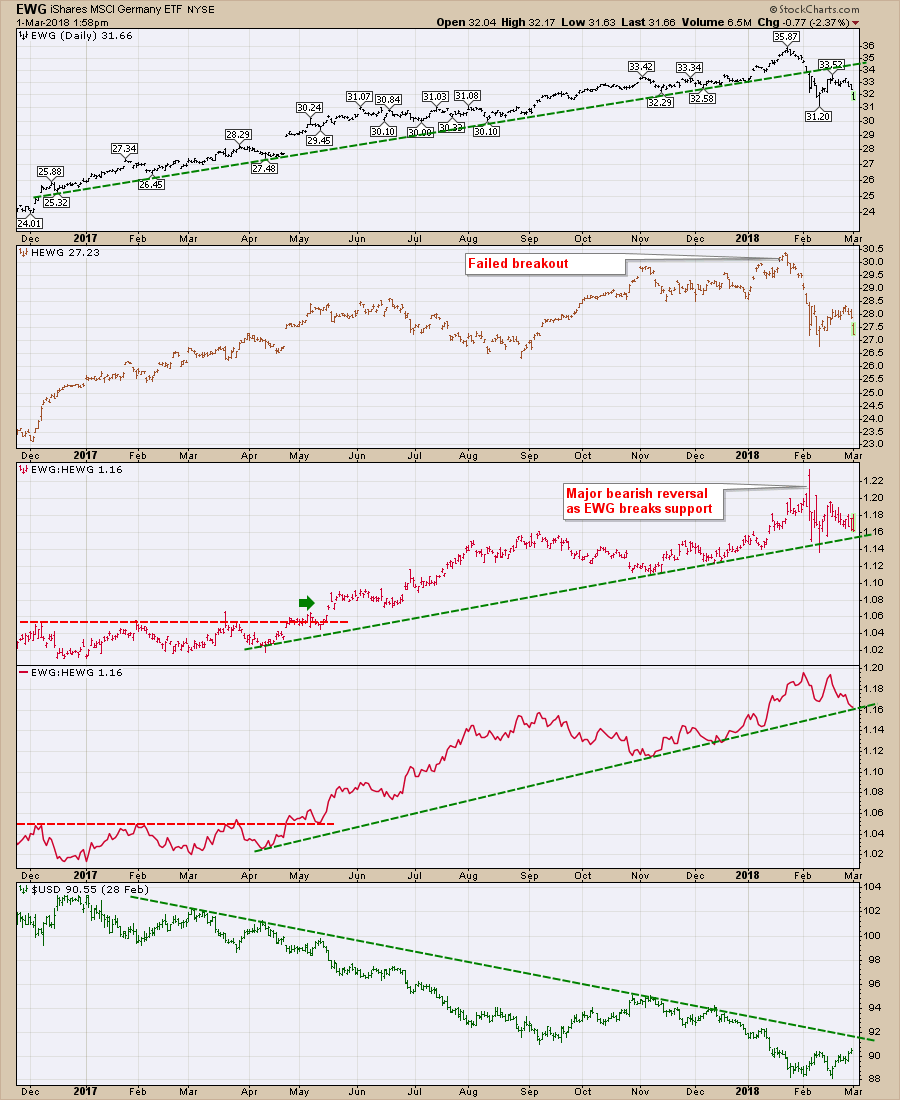 Lastly, let's do a little technical analysis on the $USD on a weekly chart. Even though the US stock market is down hard today (Dow down 500), the Dollar is relatively unchanged. The $USD chart has consolidated for 7 weeks which is shown in the zoom box. However, there are a couple of critical things in play. There is a significantly higher low in the PPO currently than on the previous low which is setting up positive divergence with price. Price has made a lower low, with a higher low in momentum (PPO).

Price is also at an important 7-year trend line. The last two points on this chart were major inflection points for commodities as shown. In 2011, there were also European issues for the 'club med' countries having some debt issues. Greece became the highlight reel for that. In 2014 the fed announced the potential end to QE infinity. The stock market continued higher, but the dollar started to soar. In September 2014, oil broke support which caused a fall correction in equities and expanded across most sectors in 2015.

One of the clues I watch for on the weekly charts is when the PPO trend lines start to break. If we get a breakout in the PPO above the yellow down trend line, I would expect commodities to fall away again. We'll see if my bias is correct. 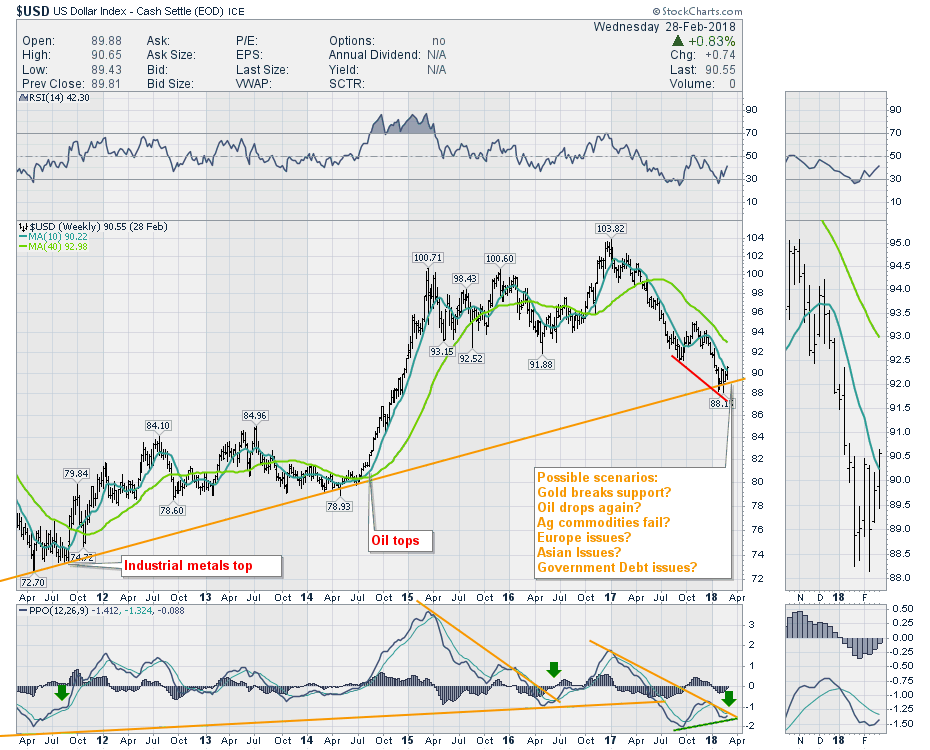 If the potential upside breakout in the dollar is a new idea and the first you have heard of it, you may find the videos I do every week helpful. You can find them on my Vimeo channel. Hopefully, the timeliness of this article can also help you with hedged currency vs. unhedged currency investing.