I was taught early on that "a rising tide lifts all boats" and that the real game as an equity investor was to get the market call right. Forget about the individual stocks and instead focus your attention on the macro call.

After our three panelists each shared five ideas during our latest episode of The Pitch, I commented to the group that it's fascinating to me that, while there are plenty of potential headwinds to the major market averages, none of seem to be having trouble finding compelling charts. In fact, some of the groups like restaurants, renewable energy equipment and automobiles basically look downright bullish.

So how do we reconcile a weaker tape this week with emerging strength in these groups? Well, we have to remember that it's not a stock market... it's a market of stocks.

I use my Market Trend Model as a systematic way to determine whether I should be leaning risk-on or risk-off. But I realized a long time ago that, regardless of the overall market trend, it is always a good time to own good charts.

The S&P 500 failed to hold a key support level this week, finally closing below 3900 for the first time since mid-July. And mega-cap leadership names, like MSFT and AMZN, are testing key support levels while other FAANG stocks, like META, have already broken down to new lows for the year. 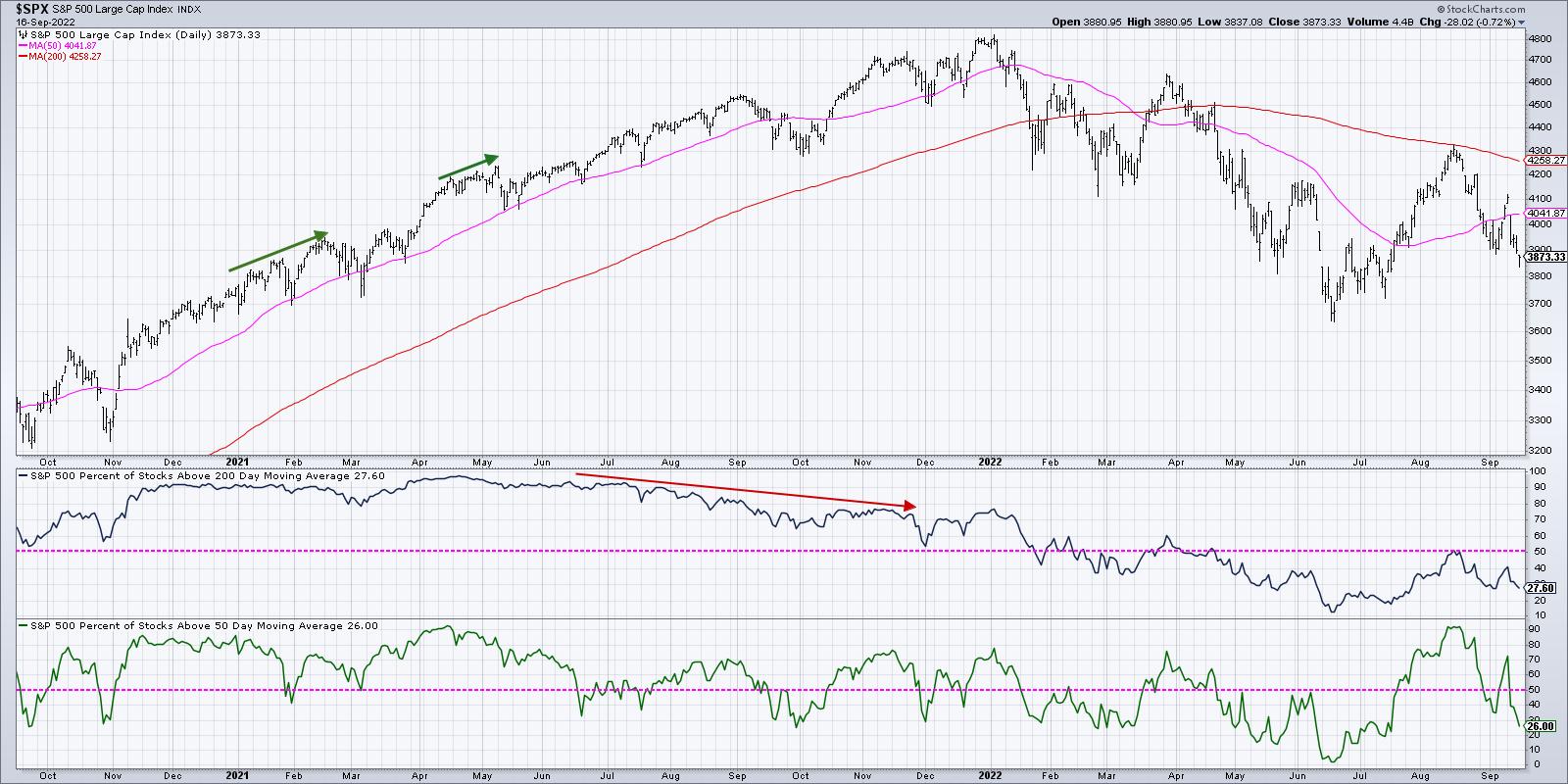 Perhaps most concerningly, only 26% of S&P 500 members remain above their 50-day moving average as of Friday's close. That's down from over 70% just one week ago! I've learned that when that indicator is below 50%, then the breadth is just not supportive of further upside for the benchmarks.

But despite all of those macro headwinds leading into next week's Fed meeting, plenty of individual stocks are demonstrating clear patterns of accumulation. When I scanned for new swing highs and lows for my Market Misbehavior Premium Members earlier this week, I came up with 83 new highs and 125 new lows. And that's after Tuesday's big down day.

Despite the questionable market conditions, three groups stand out with strong patterns and upside potential. I should note that all three of these groups were highlighted in our latest episode of The Pitch. As a matter of fact, this first group was selected by not one, not two, but, for the first time ever, all three of our panelists. 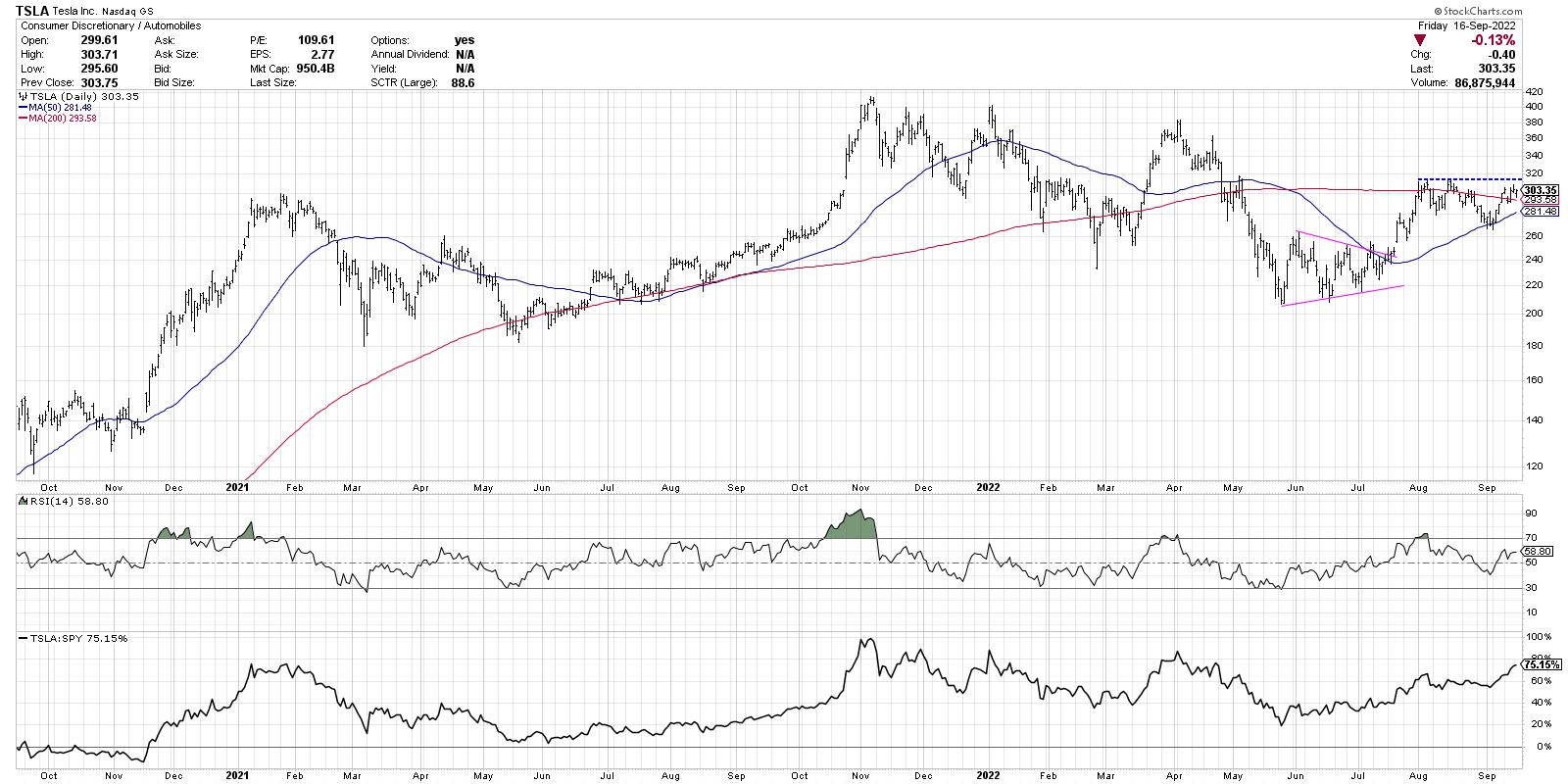 Tesla (TSLA) managed to pound out a new four-month relative high this week, handily outperforming the broader market as it remains above both the 50-day and 200-day moving averages. While a break above previous resistance around $315 would complete the bullish rotation here, it's important to focus on the relative picture, which indicates that this name has provided a fantastic opportunity to outperform in recent months.

And it's not just Tesla. Other auto makers, like RIVN and GM, have rotated from a distribution phase (lower highs and lower lows) to an accumulation phase (higher highs and higher lows). 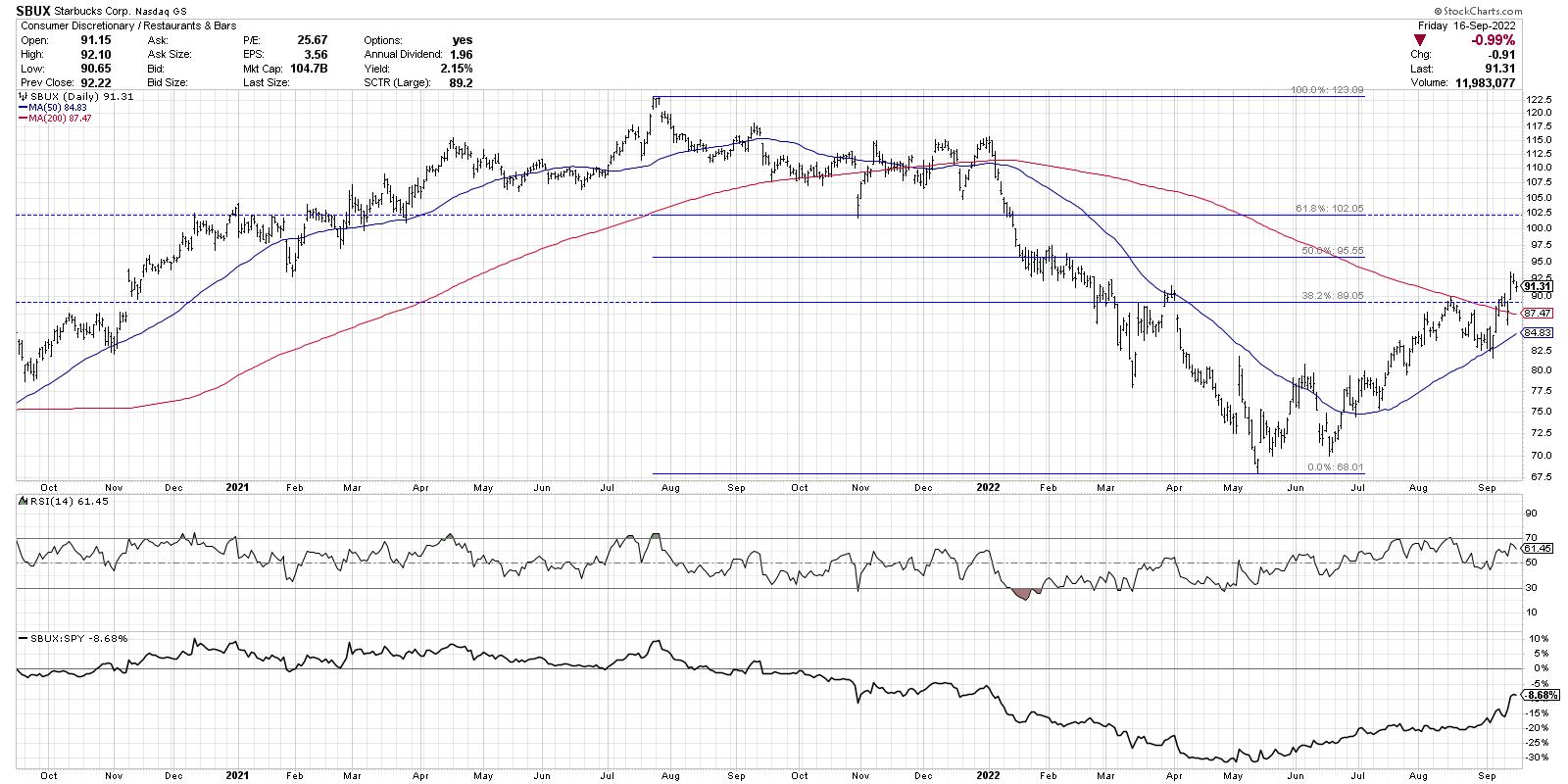 The restaurants group has also had a strong run despite the challenges facing the broad market averages. CMG and others have rotated nicely to an accumulation phase.

I chatted with Julius de Kempenaer on The Final Bar this week about the strength in Consumer Discretionary stocks, which is a little surprising based on its traditional role as offense. In fact, one of the great indicators in 2022 has been the equal-weighted Consumer Discretionary to Consumer Staples ratio, which has proven to be a much better indicator than the cap-weighted ratio using the XLY and XLP. 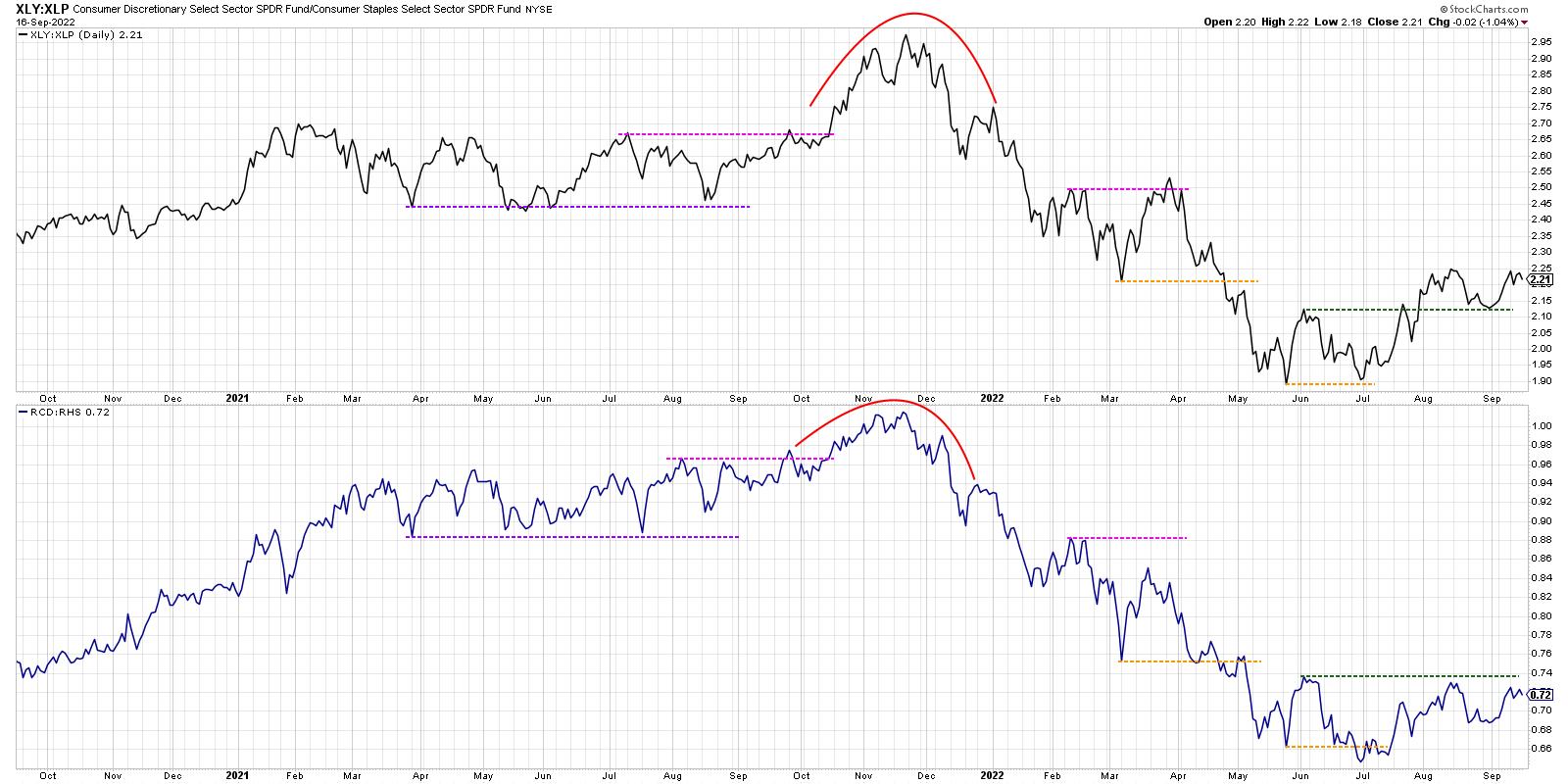 So while Consumer Discretionary as a whole has provided mixed results, charts like Starbucks (SBUX) are breaking above key resistance levels and signaling further upside potential. 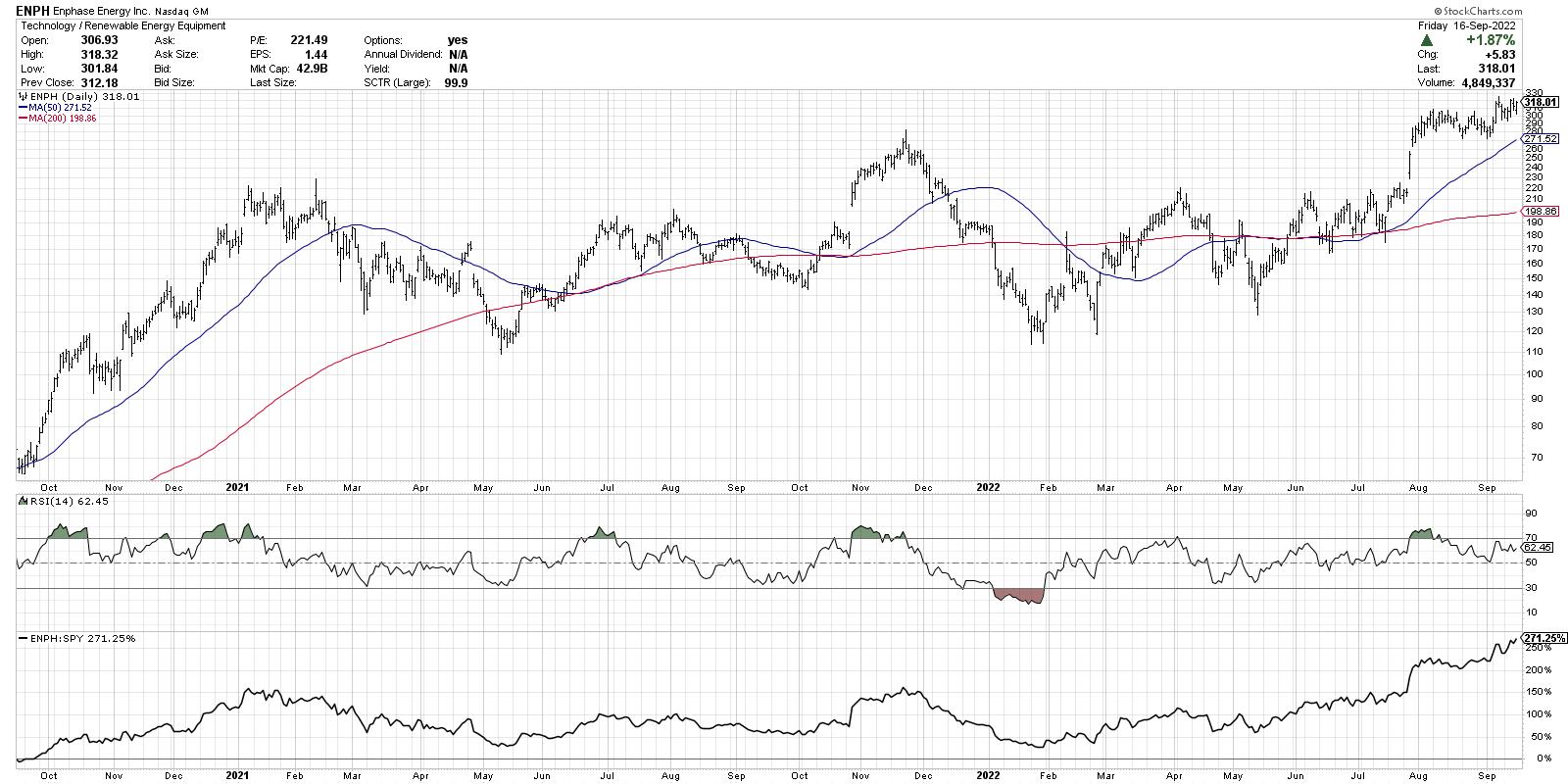 Finally, we have the renewable energy equipment, which consists of names like PLUG, FSLR and ENPH.

Enphase Energy is currently the top-ranked large-cap name, using the StockCharts SCTR rankings, and ended the week near a 52-week high. So while FAANG stocks are testing new 52-week lows, charts like ENPH almost look a FAANG chart flipped upside down.

I'm concerned about downside potential for the major market averages going into next week's Fed meeting. I've even updated downside targets for the S&P 500 and Nasdaq, given the increase likelihood of a retest of the June lows. But despite the potential weakness for equities as a whole, there are plenty of opportunities out there if you know where to look!

For more information on why the S&P 3900 level is so important, head over to my YouTube channel.