The Relative Rotation Graph below holds a number of international, country and regional, stock indices. In order to get a bit more clarity I have zoomed in to the central area that holds the most observations. You will see one observation "off the grid" in the top right-hand corner, this is China. And you will find one observation far in the top-left corner, just peeking back on the plot again, which is Portugal.

Let's have a quick look at those two charts to get them out of the way and then zoom in on the remaining markets on the RRG. 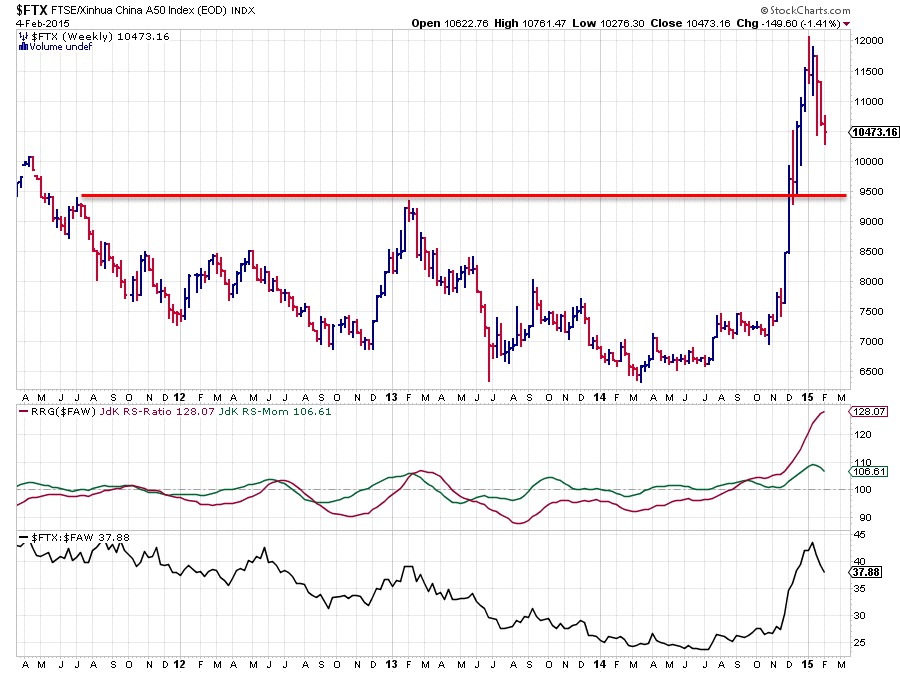 Despite the weak performance of the Chinese market over the past few weeks, the relative trend is still strong. The JdK RS-Ratio line has stretched all the way up to levels above 125 which is really really strong. One argument could be that this is now way over-stretched on relative strength against the rest of the world and China will be an under-performer. This may be the case for a while but when I look at the bigger picture I see a raw RS-Line which shot straight up and now entered the first 'corrective' move since mid-2014. I am reluctant to qualify that as a 'new down-trend'

A similar situation is seen on the price chart. The acceleration in November and December, followed by the upward break of horizontal resistance and another acceleration leading to the recent peak is a very strong move after which we now see a first correction. It would be very unusual for the market to drop straight back. With regard to that please also refer back to the previous post on international markets here. The long-term situation (price perspective) has not changed.

The first natural support level would be the old resistance level near 9.500. Any low formed at a level higher than 9.500 is a sign of strength. It looks like better entry points are ahead but this trend does not seem to be over. 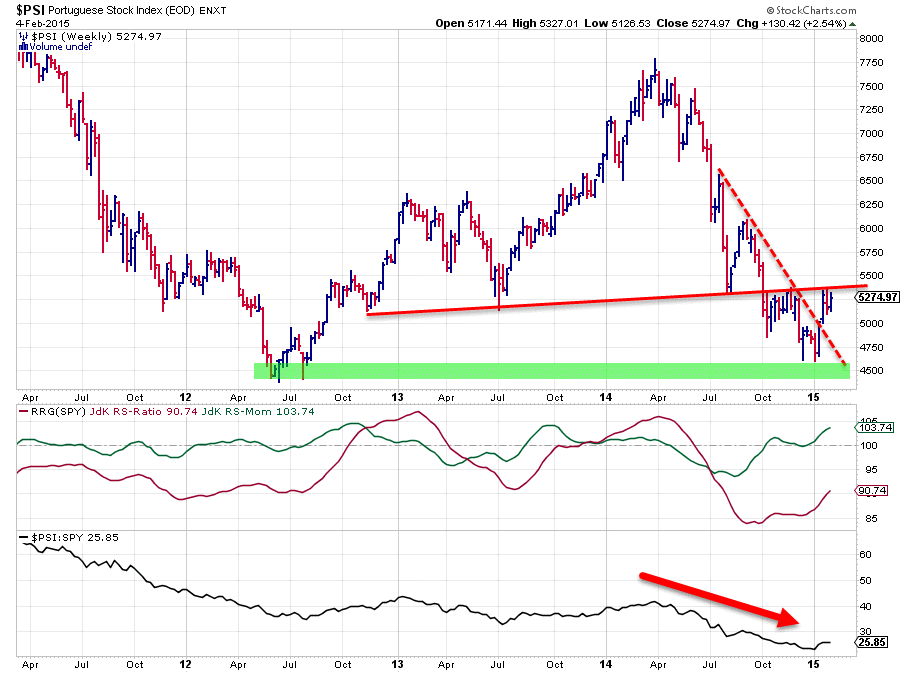 The Portuguese market is somewhat different. The strong down-trend that started in April 2014 has dragged relative strength down, causing the JdK RS-Ratio level to reach values below 85. Starting Q2-2014 there was no doubt about the relative or price trend of Portuguese stocks. However, things seem to be changing.

At the end of 2014 prices reached a support cluster coming off the June-July lows in 2012 and the market bounced off that level. In the same move, a pretty steep, falling resistance line was broken. On the relative charts this has only translated into a rising JdK RS-Momentum line but not much else. The trend is still down. On the price chart a significant overhead resistance level seems to come back in play now around 5.300. All in all this makes me think that even IF this is really a turnaround situation we need to see the start of a new series of higher highs and higher lows on the price chart. That has not happened yet. Also a real turn up in the raw RS-line (JdK RS-Ratio above 100) is needed. Hence my idea that another rotation on the left hand side of the RRG is needed before thinking of anything else.

Rest of the world

The Relative Rotation Graph holding the "rest of the world" also offers some interesting observations.

The first one being that almost all 'green trails' on the plot are European markets. Secondly we see two major world markets, the US and Japan, heading lower on both axes and entering the weakening quadrant. At a bare minimum this is giving us some warning signals that forces are shifting internationally. The third thing that catches my eye is the move of Emerging Markets. This is still, together with Portugal, one of the weakest markets in this universe measured by JdK RS-Ratio. Given the fact that the move is almost vertical on the RS-Momentum axis and there is virtually no improvement on the JdK RS-Ratio axis suggests that this is merely a hiccup in the existing relative down-trend. Finally there is the Swiss-Italian controversy. The Swiss market-index being hammered for obvious reasons over the past few weeks is rapidly heading for the lagging quadrant. The Italian market  is rotating almost exactly opposite. 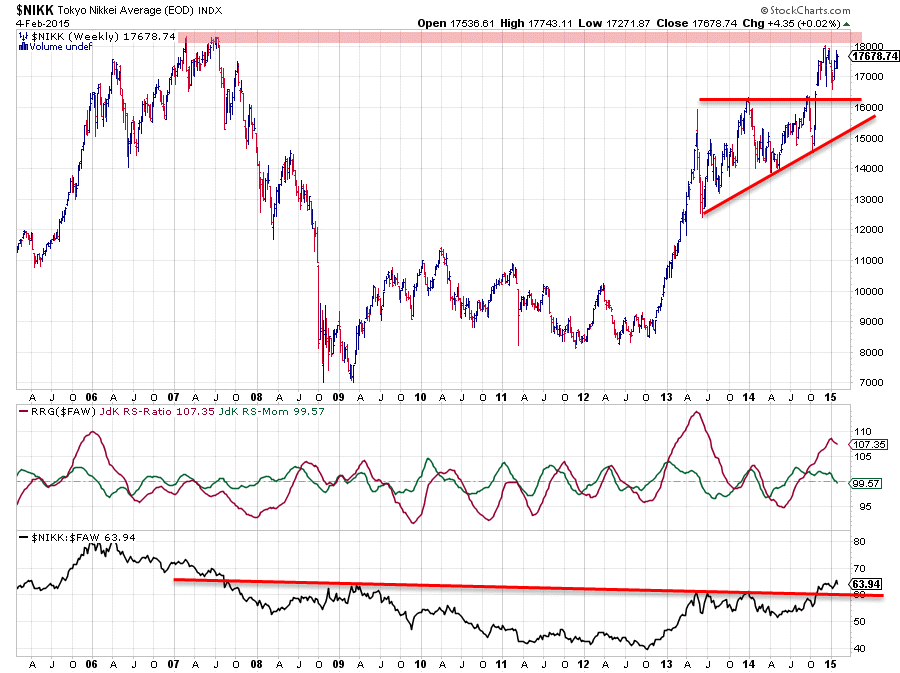 To get a handle on the rotation of Japanese equities vis-a-vis the world we need a longer-term chart as shown above. The price action over 2013 and 2014 can be characterized as an ascending triangle formation. A bullish pattern when the horizontal boundary is broken upwardly. This happened in October. The raw RS-line turned up sometime mid last year and recently broke an important overhead resistance level clearing the way for more relative improvement. The JdK RS-Ratio already picked up this relative up-trend in July when it broke above the 100-level.

However, the longer-term chart reveals that another heavy horizontal resistance level is waiting overhead just beyond 18.000. Taking out this barrier will be crucial for the continuation of the current move. The target that can be determined based on the ascending triangle comfortably positions the Nikkei index above 18.000 and suggests that more upside is needed. So watch for a break of 18.000. That move will very likely cause the Nikkei index to rotate back into the leading quadrant on the RRG chart. 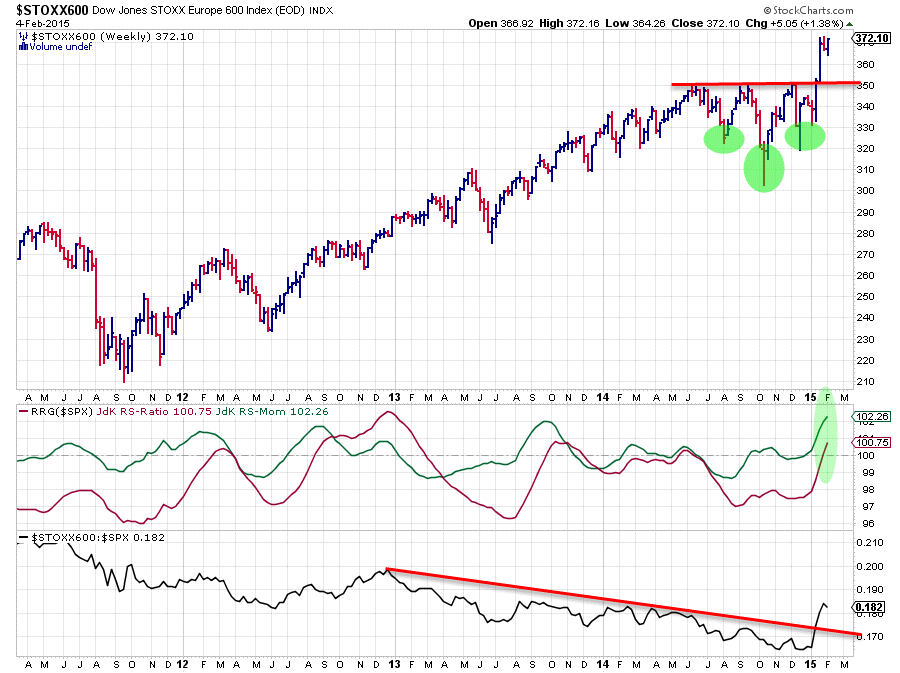 On the Relative Rotation Graph the STOXX index and the SPX index are rotating opposite of each other. For a long time the American market was leading the way but the forces are shifting in favour of Europe.

However, the real power is seen on the price chart where the STOXX index completed an inverted H&S pattern (continuation) by breaking the neck-line (horizontal resistance) near 350. That break caused the acceleration that we are currently experiencing in European markets.

The US market on the other hand ($SPX) has not been able to take out its recent highs and is now struggling with overhead resistance between 2050-2100. I am going to monitor how long this out-performance of Europe over the US is going to last. But for the time being: enjoy the ride (while it lasts).