Energy (XLE) and financials (XLF) led the market action on Thursday, although our major indices were bifurcated with slight gains in the Dow Jones and S&P 500 and minor losses on the more aggressive NASDAQ and Russell 2000.

Crude oil ($WTIC) has been flat the past two days, but now appears to be uptrending in 2016.  Take a look at the following chart of just the past few months: 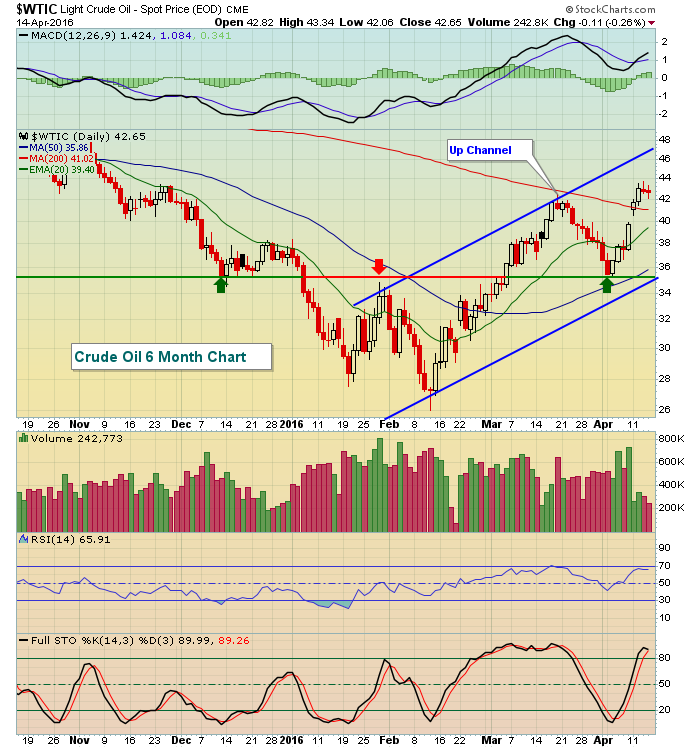 The move higher in crude oil and the energy sector in general is helping to keep the S&P 500 stable and rising.  The $35 per barrel level has proven to be fairly significant throughout the past six months and that $35 level is now where a potential trendline within the up channel resides.  Losing $35 support would be bearish on a number of fronts, including the likelihood of weaker global economic conditions ahead so keep an eye on this support level.

Consumer staples (XLP) produced the largest loss on Thursday as the Dow Jones U.S. Food Products Index ($DJUSFP) lost 20 day EMA support with a negative divergence in play.  This industry could be staring at an upcoming 50 day SMA test, applying more pressure to the staples area.

Crude oil is down 2.6% this morning (at last check) and that's pressuring U.S. futures.  In addition, today is options expiration (third Friday of calendar month) and much of the action of late has been higher.  Therefore, it's reasonable to assume that downside action could benefit market makers in the near-term.

Overnight, Asian markets finished fractionally lower and Europe this morning shows mostly losses in the 0.5% range.  Still, behavior in those indices have been very bullish of late so small losses are not really changing the short-term bullish picture.  Longer-term technical indications are much more dicey, which is why it behooves most traders to keep stops in place in the event the short-term picture changes.

Citigroup (C) and Regions Financial (RF) both topped EPS expectations in their latest quarters and could provide another boost to the banking space ($DJUSBK), which is looking for a catalyst to break above 300 price resistance.

As I'm sure you know by now, I spend a great deal of time studying intermarket relationships to determine the sustainability of trends - in both directions.  By following the rotation of money, I believe you can predict price reversals in our major indices before they occur and this rotation receives little or no attention in the media.  Most of my focus with respect to intermarket ratios relates to daily charts, or the intermediate-term (say 6-12 months).  Below is a longer-term look at what's transpired (and still transpiring) in the U.S. stock market: 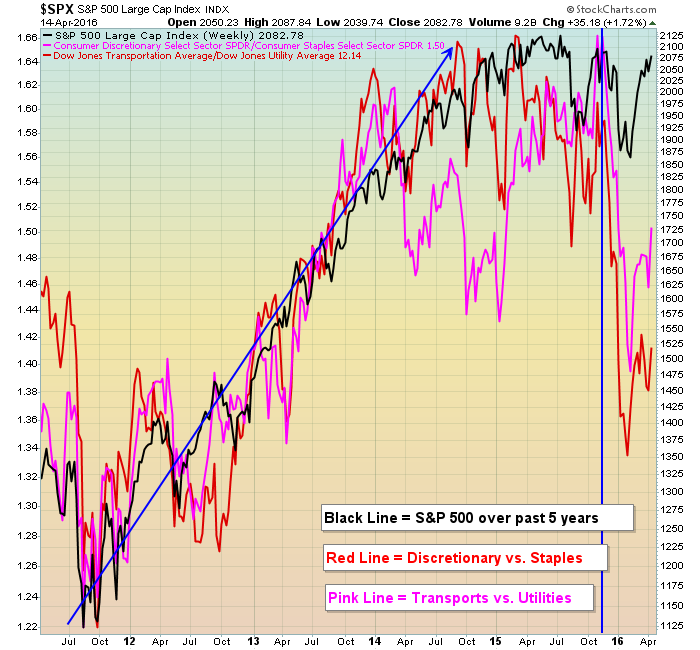 The XLY:XLP and TRAN:UTIL completely fell apart in late 2015.  They're recovering, but they have a long way to go for these relationships to appear healthy.

Clearly, rotation is not what it needs to be to sustain a breakout in a bull market.  Look at how closely these lines follow one another throughout the 2011-2014 bull market push higher.  That was a very strong period in U.S. equities.  Since then, we've seen deterioration and it's no surprise that the S&P 500 has struggled to push higher.  The S&P 500 (black line) was above both of the relative ratio lines in the second quarter of 2015 and, not surprisingly, that's where we topped.  Now look at where those relative ratios stand.  WELL below the S&P 500 line.  This is a signal that money has turned much more defensive.  While that guarantees us nothing, it tells me to at least be very cautious until market participants decide to turn more aggressive.

Problem #2 is slowing momentum that appears all over our index, sector and industry group charts in the form of MACD negative divergences.  Over the past three months, industrials (XLI) have surged 13.60%, trailing only energy (XLE) and materials (XLB) as the best performing sectors.  But the XLI may have one of the worst divergences I've seen.  I featured the group under the Sector/Industry Watch section on Thursday, awaiting a breakout.  Yesterday, the group broke out barely - check out the negative divergence: 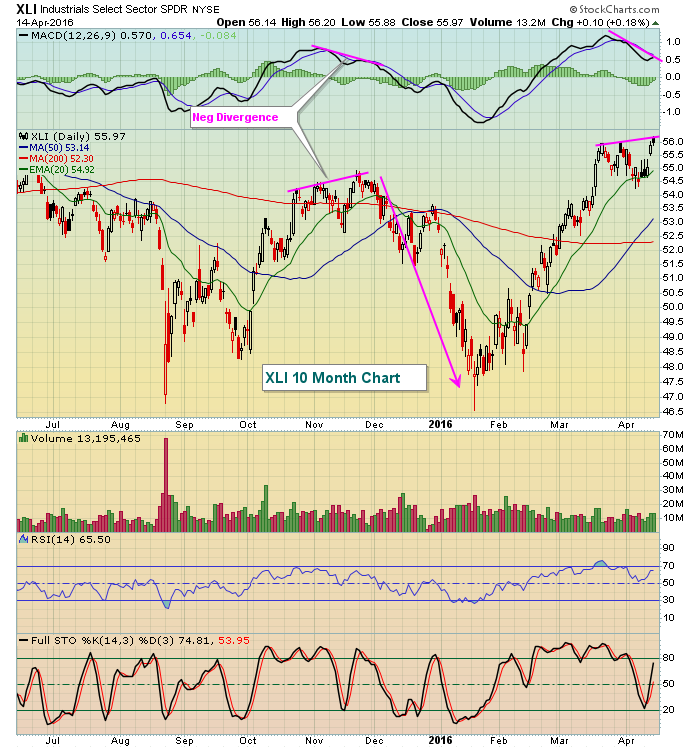 You can see what happened to industrials after the last negative divergence printed.  I'm not predicting a free fall, but you should assume that the group carries much higher risk as a result of this slowing momentum.  And the problem is that it's not just this group.  These negative divergences are printing everywhere.  Therefore, if rising 20 day EMAs are lost or if significant reversing candles print, I'd grow much, much more cautious - even bearish if that's your thing.

Finally, the market has history going against it as it tries to move to all-time highs.  For more on that, check out the Historical Tendencies section below.

Specialized consumer services ($DJUSCS) is a part of the consumer discretionary sector (XLY) and is attempting to reverse its downtrend.  There's been much consolidation over the past two months as the group attempts to clear price resistance.  Check out the technical issues: 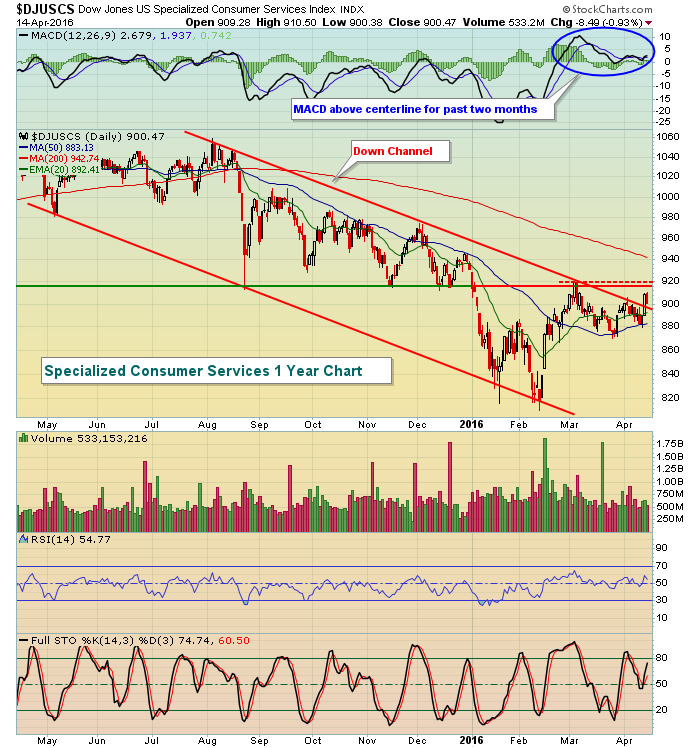 There are some positive signs here, including the MACD remaining above zero for the past two months and improving volume trends.  Also, the down channel appears as though it could be broken.  But one primary obstacle remains.  The DJUSCS must clear resistance near the 920 level.  In my opinion, that would confirm the other bullish developments on the chart technically.

October through April tends to produce very solid S&P 500 performance.  Below are the annualized returns by calendar month on the S&P 500 since 1950:

Now look at the annualized returns on the S&P 500 (over the same 66 year period) for the May through September period:

The difference in performance appears rather obvious to me.  Again, it doesn't mean we can't break out, but the odds seem to be stacked against the bulls.