The much-awaited FOMC policy statement was released at 2pm EST on Wednesday afternoon and the market collectively yawned for an hour before selling kicked in during the final hour.  Beneficiaries on the session included basic materials (XLB, +0.45%) and the defensive REITs ($DJR, +0.82%) as the market now considers a rate hike any time soon to be minimal.  That put pressure on the U.S. dollar ($USD), which turned lower after its recent string of gains.  A weaker dollar benefits materials stocks, especially gold (GLD) and GLD finished higher by 0.74% on Wednesday and is threatening another breakout.  Check it out: 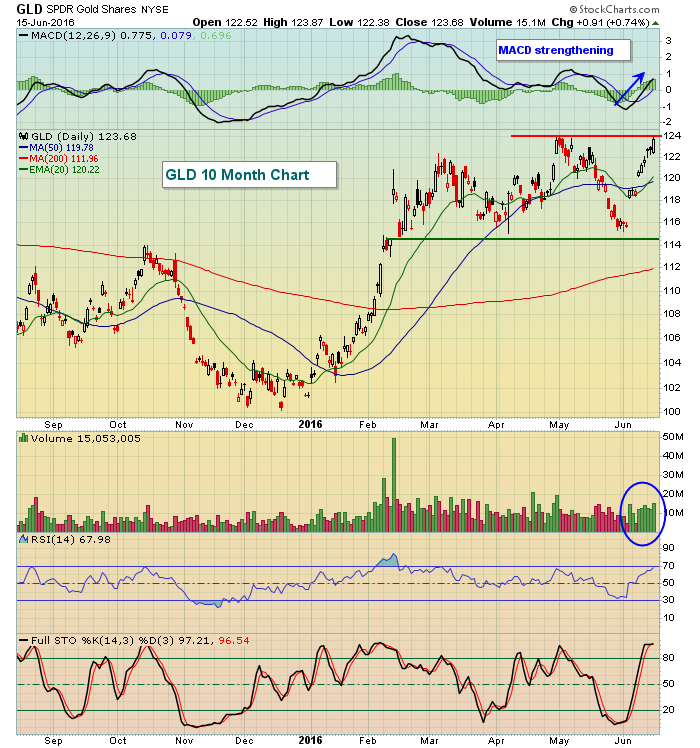 Gold is on the verge of a breakout, but it is technically overbought as it tests price resistance (red horizontal line).

Healthcare (XLV, -0.69%) and utilities (XLU, -0.63%) were the worst performing sectors yesterday.  Multiutilities ($DJUSMU) lost 1.00% on the session, but that appears to be more profit taking than anything else.  The DJUSMU is reviewed below in the Sector/Industry Watch section.

The German DAX ($DAX) is down more than 100 points and currently trades beneath the 9500 price support that was highlighted in yesterday's blog.  The S&P 500 tightly tracks the action in this European index so it is not comforting at all to see the DAX trading beneath multi-month price support.  Contributing to global weakness is the Bank of Japan's decision to do nothing.  The yen strengthened against the dollar as a result while the Tokyo Nikkei ($NIKK) fell another 3.05% and now isn't far from major price support close to 15000.

Traders are now turning their attention to Brexit, the upcoming referendum on Britain's membership of the European Union, another uncertainty that's driving fear and equity prices lower.

Finally, money continues rotating towards treasuries with the TNX down to 1.54%, a fresh recent low - bad news for equities.  Dow Jones futures are currently lower by 64 points as recent weakness continues.

Global weakness in equities, combined with a soaring VIX, is likely to spell trouble for the S&P 500.  The VIX fell back intraday on Wednesday, but once the sellers lined up again in the final hour, the VIX was quickly regaining its upward stride.  Check out the intraday chart: 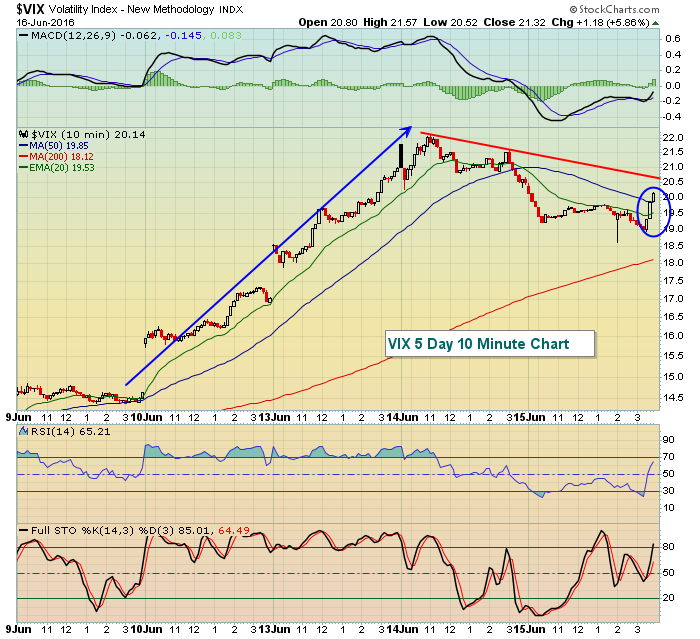 The VIX spiked 50% in just over two trading days before relaxing as the FOMC policy decision and statement approached.  Note the VIX spiked again after the decision yesterday.  The problem is that impulsive selling typically occurs when the VIX is rising rapidly and at an elevated level.  That's where we are now.  It's not helping that global markets are weak and money continues to rotate towards defensive areas.  I'm looking for more weakness ahead and I'd suggest extreme caution.

Utilities have been very strong on an absolute and relative basis of late as the defensive treasuries remain in favor.  That has sent the 10 year treasury yield ($TNX) tumbling and makes the high dividend-paying utility stocks look very attractive to income-seeking traders/investors.  Multiutilities ($DJUSMU) have been strong recently and, quite honestly, are in need of some profit taking and relief from overbought momentum oscillators.  Take a look: 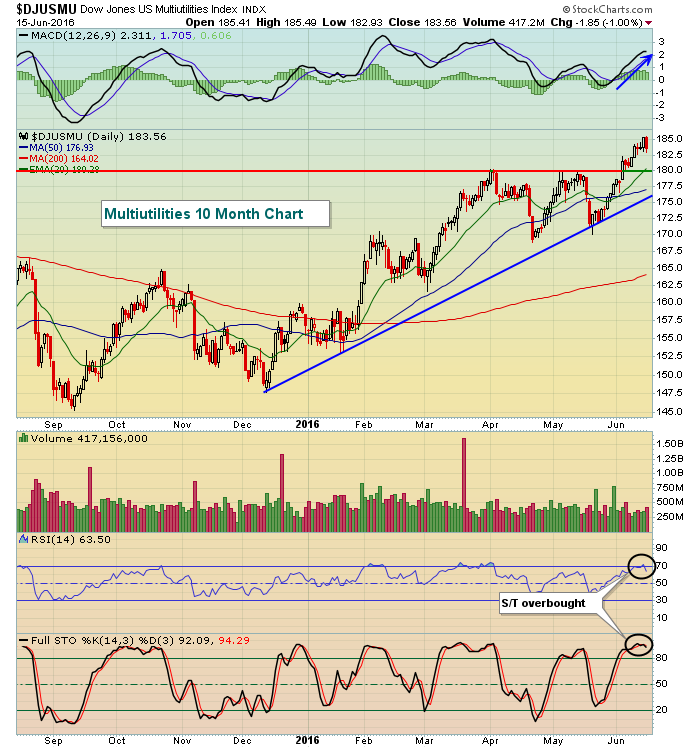 Although not marked above, Wednesday's candle is a bearish engulfing candle and that would indicate that the DJUSMU may have topped near-term.  I'd look for a trip back to test the breakout level near 180.  That should help to relieve the overbought RSI and stochastic.  The blue trendline and the rising MACD, however, are bullish and suggest any short-term selling most likely won't last.

The upcoming short-term bearish period on the S&P 500 from June 18 through June 26 has been well documented.  But the upcoming month of July has produced annualized returns on the S&P 500 of +11.75% since 1950.  In fact, from May through September, July is the only calendar month on the S&P 500 to produce returns greater than the average S&P 500 annual return (+9.00%) over the past 66 years.