Our major indices were strong throughout much of the day on Tuesday, only to see most of those gains vanish by the close.  The NASDAQ was the target of most of the selling as this tech-influenced index finished in negative territory.  The other major indices managed to hold on long enough to end the day with gains, albeit much smaller than earlier in the day.  Surprisingly, technology (XLK, +0.41%) overall didn't have a bad day, but influential groups like internet and software stocks did end lower.  Mobile telecommunications, however, surged to fresh recent highs and the action is very bullish.  Take a look: 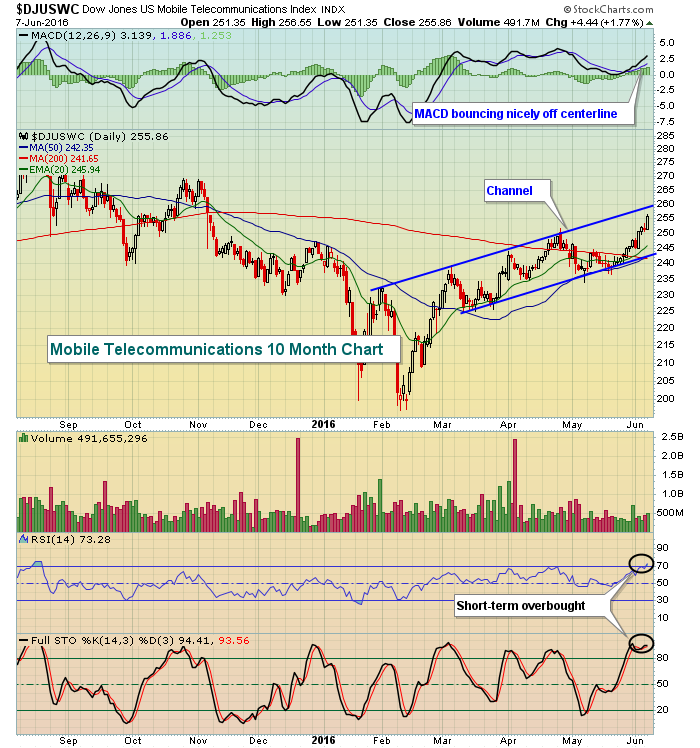 Mobile telecom is trending higher, but it is very overbought in the near-term and could use a little profit taking to relieve those overbought oscillators.

Energy (XLE, +2.26%) had another huge day as crude oil ($WTIC) topped $50 per barrel.  The XLE is nearing the key short-term price resistance level just above 70 that was highlighted in recent blogs.

To the downside, healthcare (XLV, -0.62%) was dragged lower by a very weak biotechnology group ($DJUSBT).  Biotechs are featured in the Sector/Industry Watch section below.

Despite the afternoon selloff in U.S. equities on Tuesday, the bulls are back out this morning with Dow Jones futures up 33 points at last check.  Overnight, Asian markets were mixed and there's a slight negative slant this morning in Europe with the German DAX ($DAX) leading the selling and falling 0.44%.

Perhaps the biggest news is that crude oil continues its upward trek, rising above $51 per barrel and that should once again help energy shares lead the S&P 500 in its quest to challenge its all-time closing high of 2131.

Verifone (PAY) is being slammed after missing estimates and lowering guidance after the bell on Tuesday.  PAY is down 28% in pre-market trading this morning and it underscores why I do not like holding stocks into their earnings reports.

The S&P 500 rose to 2119 intraday on Tuesday to move within just 12 points of its all-time high close of 2131.  Volume was just moderate, however, and the end of session close at 2112 left an ominous tail above.  A break above 2119 would negate the tail but increased selling on Wednesday could confirm it as a short-term top.  Given that this has been an area for reversals the past year to 18 months, we should respect it.  Take a look: 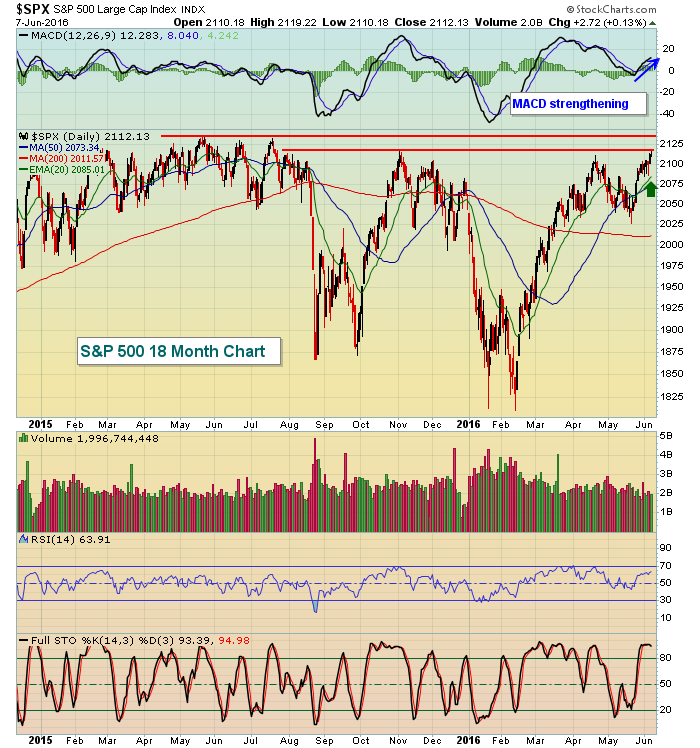 Overhead resistance from 2120-2131 is rather obvious from the above.  Now that the MACD has once again moved higher and suggests strong momentum, look for the rising 20 day EMA (green arrow) to provide support on pullbacks.  That's the trading range for now.

The Dow Jones U.S. Biotechnology Index ($DJUSBT) lost 2.31% on Tuesday, despite the overall bullish conditions.  Technically, it isn't anything to become overly upset about as its rising 20 day EMA has not been lost with its MACD above its centerline and pointing skyward on the most recent price high.  Check it out: 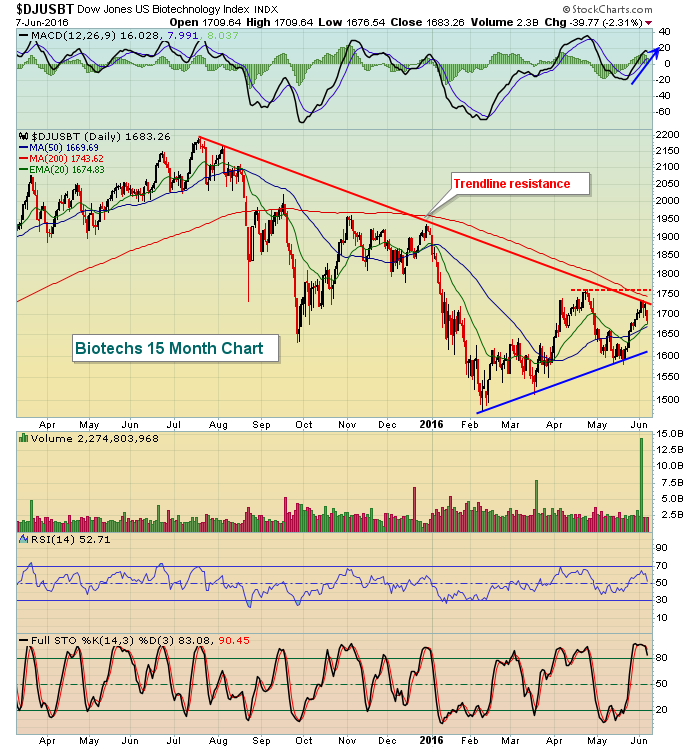 The short-term uptrend (rising blue line) remains intact and the MACD is bullish.  The problem with biotechs remains the longer-term downtrend (descending red line) and the group's inability to clear that falling 200 day SMA.  A very bullish signal would be the DJUSBT clearing the following;  (1) trendline resistance, (2) the 200 day SMA and (3) price resistance (horizontal red dotted line).

Thus far, the Russell 2000 has been dodging the historical selling that tends to take place this time during the month of June.  Here are the annualized returns (since 1987) on the Russell 2000 for the past couple and next few trading days:

It's worth noting that June 11 and June 12 carry annualized returns of -108.78% and -86.20%, respectively, but these two historically bearish days fall on a weekend this year.