It was mostly a broad based rally on Thursday as all of our major indices finished higher.  Seven of nine sectors ended the day higher as well, with technology (XLK, -0.09%) and energy (XLE, -0.13%) the two weak links.  Key areas within technology struggled, including semiconductors, internet and computer hardware.  Biotechnology ($DJUSBT) led a strong healthcare sector where all of its industry groups finished at least 1% higher on the session.  Pharmaceuticals ($DJUSPR) closed at their high of 2016 and nearing a very important resistance level at 510-515.  Take a look: 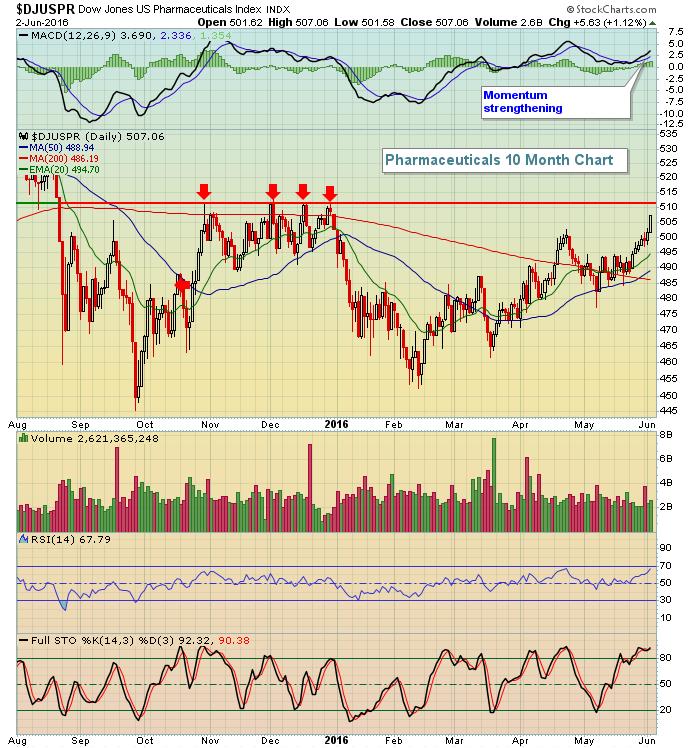 The recent market strength has pushed stochastic to overbought territory at 95 on the S&P 500, but its RSI remains in neutral territory at 63.  70 is generally considered overbought on RSI.

It's an interesting morning.  Nonfarm payrolls were the lowest in six years at just 38,000, well shy of the 158,000 that was widely expected.  Those looking for a market collapse on such bad news have been disappointed thus far with futures down about 0.4%, not too bad considering the significance of the miss.

The 10 year treasury yield ($TNX) has tumbled more than 8 basis points back to 1.72% on the news as investors seek the safety of treasuries.

It's always nice to see equities rising and small caps leading the way.  That's exactly what we're seeing during this rally.  Below is a look at the fresh recent highs on the Russell 2000, followed by a fresh new relative high as well: 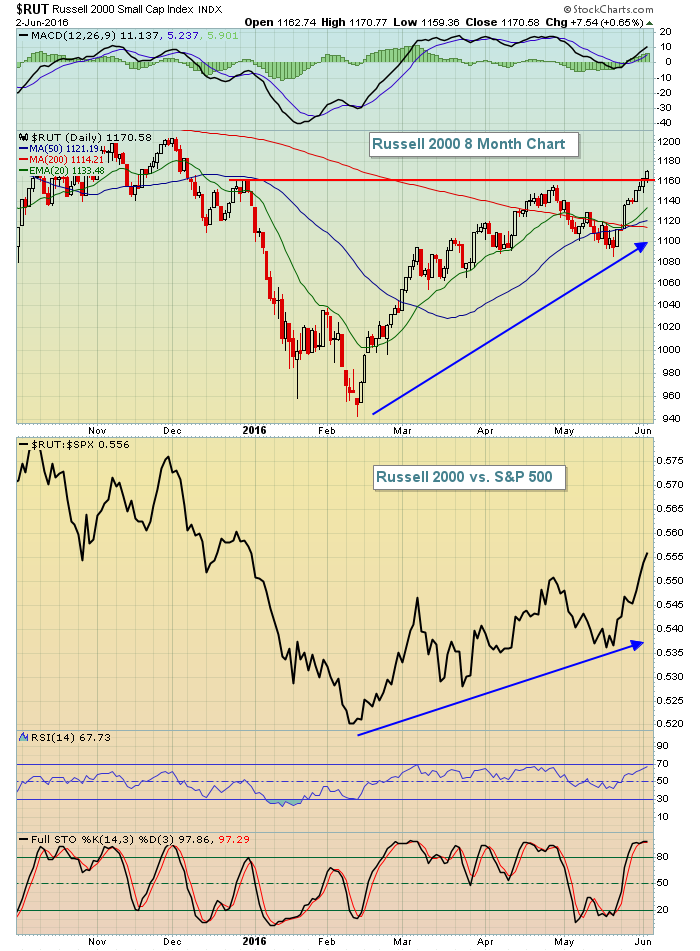 Keep in mind that the relative trendline is rising and that means the more aggressive Russell 2000 is outperforming the benchmark S&P 500.  Rallies are generally sustained when money rotates into more aggressive areas so this relative breakout should be considered bullish.

Footwear ($DJUSFT) fell on Thursday to near its 52 week low.  It's not only testing its price low, but it's also approaching its relative trendline support (vs. the S&P 500).  Check this out: 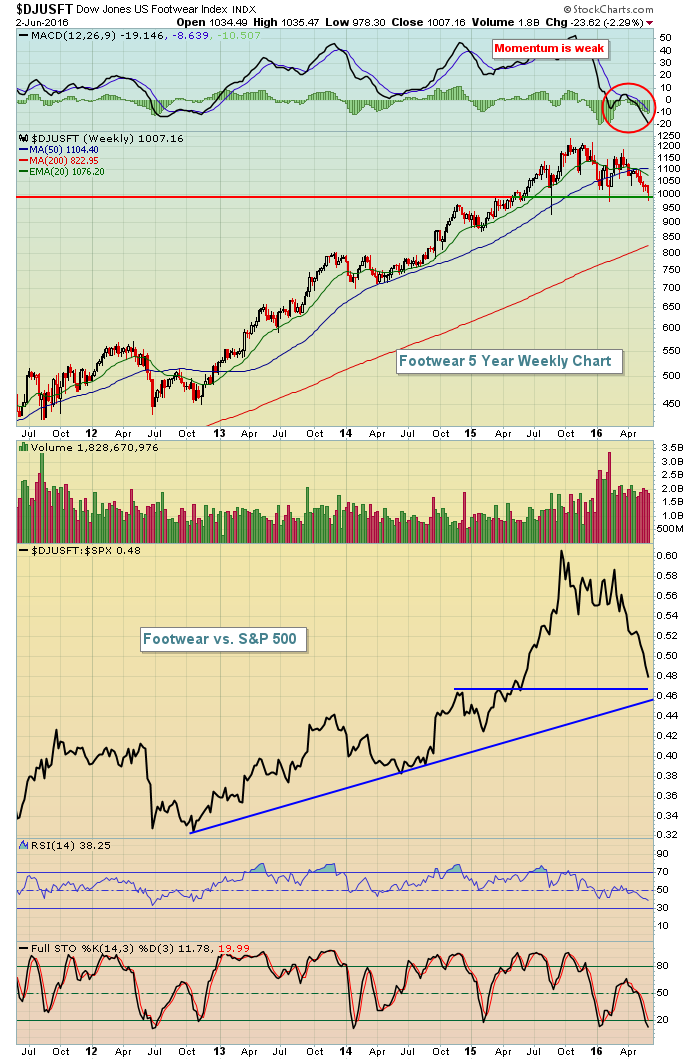 Clearly, footwear stocks are nearing a very critical price support level.  There looks to be a bit more relative weakness down to relative trendline support and that might coincide with the seasonal pattern for footwear stocks, which generally is weakness during the summer months.  More specifics are provided on seasonal patterns for the group in the Historical Tendencies section below.

While footwear stocks have climbed 59% of the time during the month of June over the last 17 years, their average June return is -1.1%.  The job for footwear bulls will be to try to hang onto technical support through August because the September to December period is very strong historically.  Here's the snapshot of what this group faces: 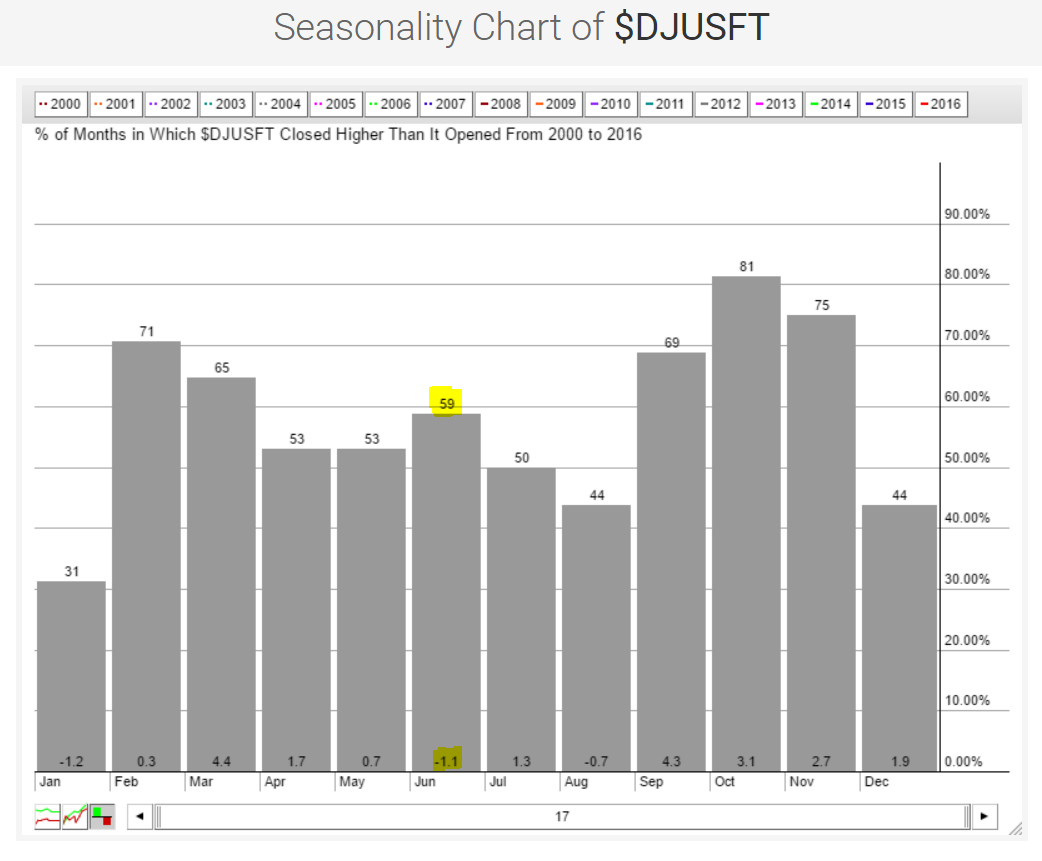 The strength in September could be at least partly attributable to back to school.