The nonfarm payrolls report on Friday was horrid.  Wall Street was expecting 158,000 jobs and the government reported 38,000.  It was the lowest number in six years and futures immediately dropped on the news at 8:30am EST Friday morning.  The good news, though, is that after a bit of weakness at the open, U.S. markets rebounded and the Dow Jones finished with a 31 point loss.  Considering how badly the jobs number missed expectations, bulls everywhere had to be rejoicing over the recovery.

Sadly, it's a testament to the fact that market participants feel better about lackluster growth that keeps interest rates low than they do about stimulating a truly strengthening economy that drives interest rates higher.  That weak economic news on Friday morning sent treasury yields tumbling.  Take a look at the 10 year treasury yield ($TNX), which fell precipitously after money poured into treasuries: 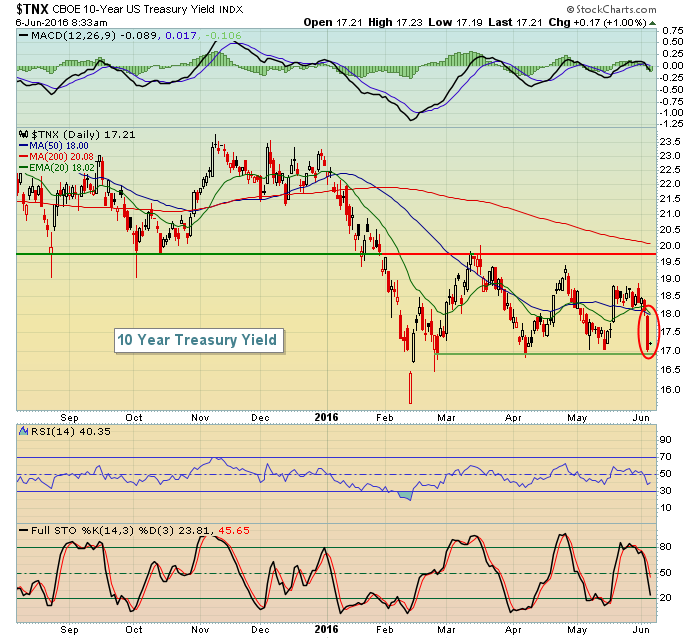 The red circle highlights one of the biggest drops over the past several months in the TNX.  Clearly, money turned very defensive on Friday.

There was further evidence of that rotation towards safety.  Utilities (XLU, +1.58%) soared on the news, clearing earlier highs in 2016.  From a bullish perspective, the XLU broke out of a symmetrical triangle.  The downside is that the XLU's relative strength failed to break out above earlier highs.  Therefore, failure to hold onto the absolute breakout level could be a sign of a top.

There's little in the way of economic news or earnings reports to open the week.  So traders continue to focus on the late day rally on Friday as futures this morning are slightly in positive territory.  With a little more than 30 minutes to go until the opening bell, Dow Jones futures are up 64 points and the S&P 500 appears poised to open back above 2100 and within approximately 1.5% of its all-time high close of 2131.

Global markets are mostly mixed as everyone awaits a speech from Fed Chair Janet Yellen later today and how Friday's weak jobs report might affect the Fed outlook. 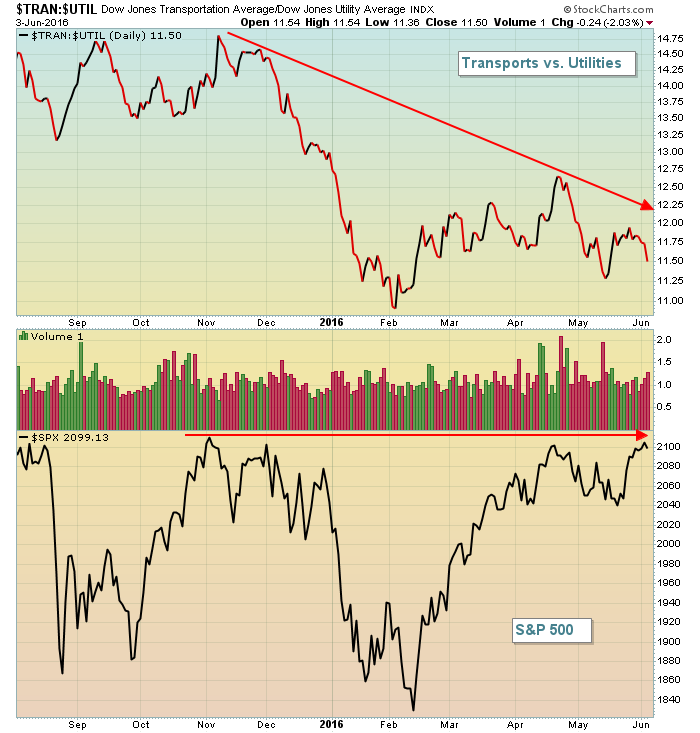 I've discussed often about all the mixed signals in the stock market.  This one isn't mixed, it's bearish.  The S&P 500 is attempting to breakout to 52 week highs and isn't far from breaking out to all-time highs.  But the relative strength line of the TRAN:UTIL is far, far from its high.  That simply tells us that this market is rising while money moves defensively away from transportation and into treasuries.  But if you notice, we have moved off the relative low in February.  So at least during the recent five month rally, money has begun to shift back toward the more aggressive transportation stocks.  Unfortunately, that shift quite noticeably was to the defensive utilities on Friday after the disappointing jobs report was released and this shift needs to reverse sooner rather later for me to feel better about future market prospects.  I remain very cautiously bullish.

I've looked at airlines ($DJUSAR) in the past, but this group continues to hold support while crude oil prices ($WTIC) have touched $50 per barrel, nearly doubling off the February low.  Check out the significance of the 200 support level on the DJUSAR: 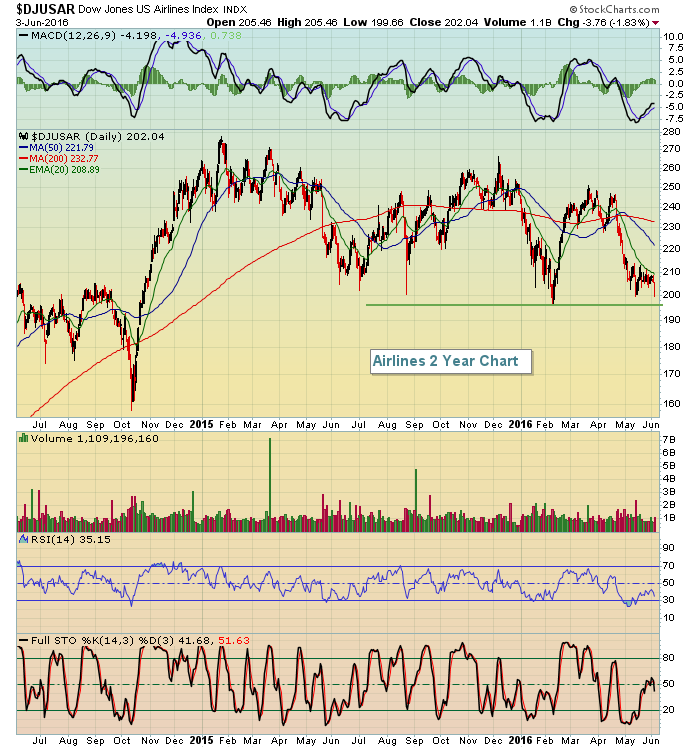 While the above chart really doesn't show it, the 2014 breakout well above 200 cleared an important resistance level from a long-term perspective.  That breakout level continues to be challenged at 200 and just below.  If the transports are going to strengthen vs. the utilities, airlines could play a very important role by first holding onto key price support.

Historically, money tends to rotate away from transportation and into utilities over the summer months.  June, August and September all carry negative average monthly returns on the Dow Jones U.S. Transportation Index over the last 20 years.